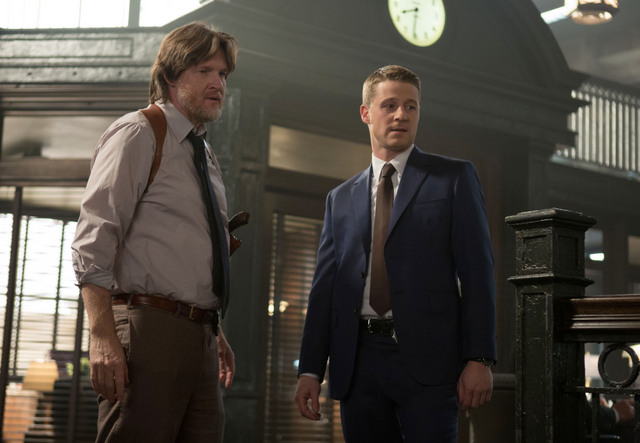 Gotham is a hard show to fully get behind. After two weeks of pretty good Gotham, we’re back to the stumbling, bumbling Batman show struggling to find its identity without Batman.

Last week did a great job of clearing the table for a significant changing of the status quo, but too much of this week’s show felt like every other weak episode. Too much Gordon going rogue and on his own while the rest of the cops turn a blind eye to the corruption and craziness; Penguin weirdness and Fish solidly in control of everything as everyone else remains a solid step behind her.

After discovering her plot to take over his empire, Falcone foolishly decided to let Fish stay alive. Falcone has one of his goons torturing her for an apology. Jada Pinkett Smith takes full advantage of the moment to ham it up. I get the feeling like the writers would be far happier if they could just focus on the Fish/Penguin/Maroni/Falcone subplot and make that the basis of the show as the scenes featuring those characters always feel so much more livelier. Because a weak Fish could make her somewhat more interesting, Butch immediately escapes his captors, saves Fish and they head to get some revenge against Penguin. The pacing of this show is always suspect as they race through these great subplots that take the characters out of their comfort level, but the writers are too afraid to explore these new scenarios and immediately want to rush things back to status quo.[irp]

Speaking of, Gordon is back as a fully reinstated cop after a whole week’s detail at Arkham Asylum. He and Bullock are working a homicide case over some drugs that could implicate Det. Flass (Dash Mihok), a cop so shady and in the pocket of the mob that Bullock warns Gordon not to screw with him. Of course, to Gordon that means ditch any pretense of caution, kick over every chair and let everyone know how much more righteous he is than the entire department. I really want to like “Gotham’s” version of Gordon, but he rarely feels like a fleshed-out character like Bullock, Fish, Maroni, Falcone or Penguin — you know, all the show’s interesting characters. Instead, he’s the show’s blowhard moral compass

Turning to show of the other characters who are just there, after a welcome two-week absence, we’re back to chronicle the adventures of Baby Batman. This time, he and Alfred are out trying to track down Selina. Luckily they run into Ivy, who’s happy to pass along a message for $20. Way to negotiate with the billionaire, Ivy.

Selina comes through the typical open Wayne Manor window and Bruce is so smitten that he fumbles over giving her a snow globe and offers her a place to stay. Selina seems terrified about someone actually caring for her. That or the writers realized Selina knowing who killed the Waynes would be ridiculous so she tells Bruce she lied so she wouldn’t go to juvy and she wants him to stop harassing her. This sends Baby Batman to doing this weird thing where water is leaking from his eyes. Fortunately, Alfred is there and calls him out for being emotional over another human being thereby preserving the future timeline where Batman is an emotionless cyborg. Whew, that was close.

At Fish’s joint, Penguin has taken over and shows off his new digs to his mom. As I feared with the show’s over reliance on Penguin, his scenes are starting to have diminishing returns.

Flass isn’t overly concerned with Gordon messing with his shady dealings as he is reading Nygma’s love letters to Kringle. The Nygma scenes feel so shoehorned in and there needs to be some advancement beyond his awkward sexual harassment of Kringle.

After a witness to the homicide gets killed at GCPD, Gordon is so frustrated with the system that he takes a page out of Bullock’s book and goes to Penguin for help in tracking down some dirt on Flass. Not long after Gordon leaves, Penguin sends everyone else home so he can enjoy his club, but that just makes it easier for Fish and Butch to come back and assume control. Worst Takeover Ever. She immediately gets Penguin groveling and kissing her feet again. Sigh.

Thankfully, someone in the Falcone empire is moderately smart and Zsasz and his three angels arrive to save Penguin. Zsasz loses one angel in a shootout and that distraction is just long enough for Butch to Fish to safety while he holds off Zsasz briefly. One bullet to the leg later and Zsasz asks his girls if he should kill Butch or play with him for awhile. Again, the logic on the nobodies who get killed immediately for no reason and the major power players allowed to live is maddening.

Gabe, Penguin’s version of Butch, has cornered Delaware, one of Flass’ lieutenants, and has a quick way to get some dirt on Flass — nearly drowning Delaware’s wife in the tub. Delaware was a bit leery of his boss anyway and had been collecting evidence and recordings on his own for insurance. Gabe delivers that and the ice pick used to kill the witness to a shocked Gordon, who can finally make an arrest in the department without getting the stink eye from everyone. That’ll have to wait for later though as Essen steps up for a change and arrests Flass. The show makes that seem like a big moment, but how dirty and cowardly would Essen look for not arresting Flass at that point?

While Gordon is dealing with Flass, Bullock is at the pier giving Fish his jacket and telling her not to come back in a scene that neatly recalls the first episode where these roles were reversed. Then, it was Gordon telling Penguin to leave and never return while Bullock and Fish held all the cards and now Gordon and Penguin’s stroke is on the rise. Fish says she’s going to leave town and lay low for awhile. With this show’s pacing, that means she’ll be back next week.

On his way back home/the police locker room where he’s crashing, Gordon is greeted by a frantic Delaware, who pleads with Gordon not to bother his wife and kids again since he rolled on Flass. Gordon, who somehow has gotten amnesia from all the shady dealings Penguin has done since he’s met him, seems shocked that Penguin would do something like threaten a man’s wife on his way to the top of Gotham’s crime empire. Oh, Jim, you’re such a blockhead.

Next Week: Confident with a season 2 renewal, we get our first two-part episode with the first appearance of The Dollmaker.