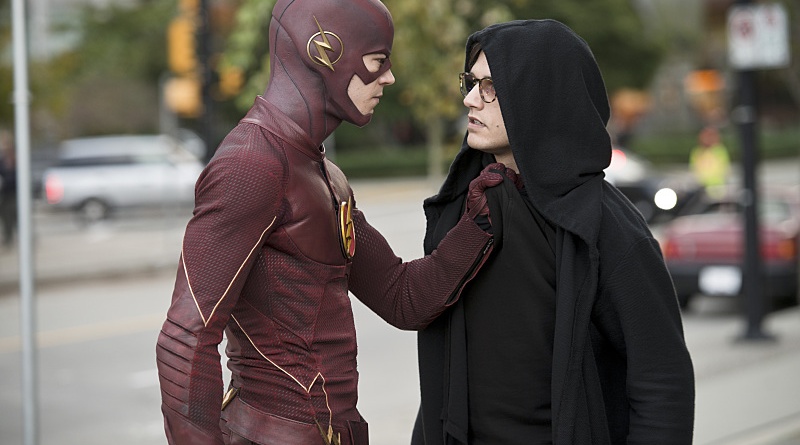 The Flash tangles with The Pied Piper

Coming off consecutive weeks with some crazy action featuring our hero tangling with The Reverse Flash and The Rogues in consecutive weeks, this week’s outing was a mild letdown, but The Sound and the Fury covered some some significant ground, resulting in a fun if not must-see episode.

[irp]We start off with a little action this time with The Flash chasing down members of The Royal Flush Gang, who are not the same ones from Arrow. Speaking of, while the nighttime settings make sense for Arrow and his crew of vigilantes and assassins, it’d be nice for more of The Flash fights to occur during the day to further illustrate the differences between the two shows. I’m sure the night fights are more TV show budget-friendly, but it’s one of the few complaints I have about the show. 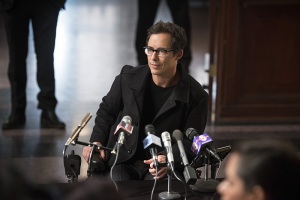 Team Flash celebrates that victory and for no good reason than to put Barry’s identity at risk, Cisco asks for a picture of the four of them. Wells is surprisingly on board with this and says perhaps people in the future will want to know more about Barry. I see what you did there, Wells.

Back at his heavily windowed place, Wells hops up from his wheelchair and takes a drink before getting a threatening call from someone who claims they know what he did and shatters the glass ceiling. Wells zooms out of the way confirming his super-speed abilities before he settles back in the wheelchair as the rest of Team Flash and Joe West come to investigate.

Wells already knows who did it – Hartley Rathaway (Andy Mientus) – his old prodigy at STAR Labs. Hartley was heir to the Rathaway empire before coming out and his parents disowned him. At STAR, Hartley found in Wells a kindred genius and quickly came to resent the rest of Team Flash, specifically Cisco, who he viewed as a threat to his status as Wells’ er … star STAR employee.

Hartley’s portrayal in the show is much different from the comic, which made him more of a sympathetic character and ally of the third Flash, Wally West. The show version opted to make Hartley more of an outright jerk and the anti-Cisco.

Team STAR traces Hartley vandalizing Rathaway Industries via sonic vibrations courtesy of his souped up gauntlets. Flash quickly takes him out, but not before Hartley taps into Flash’s headpiece to learn he’s working with Wells. As Hartley is brought to the STAR Labs prison, he tells them he was thinking of calling himself The Pied Piper. Cisco is upset that his naming thunder was stolen, but admits it’s a catchy nickname.

Piper actually wanted to get caught so he could tap into Wells’ database. Cisco tries to stop Piper, but gets knocked out courtesy of Piper’s sonic attack. I wondered if this would be the avenue the show would use to give Cisco his powers, but all Piper gives Cisco is a concussion.

Wells was busy screwing around with his Reverse Flash costume when Piper breaks out, but he races to help stop him. This time, Wells’ super speed fails and Wells is at a loss why it’s failing him. Piper comes to him revealing that he knows Wells’ secret. Piper knowing Wells can walk would have led to an interesting predicament for our favorite hero mentor/arch-enemy, Piper’s blackmail material isn’t nearly as juicy. Back when Hartley worked at STAR, he warned Wells that the particle accelerator may fail. Wells ignored the advice and fired Hartley. And how he’s ready for payback. 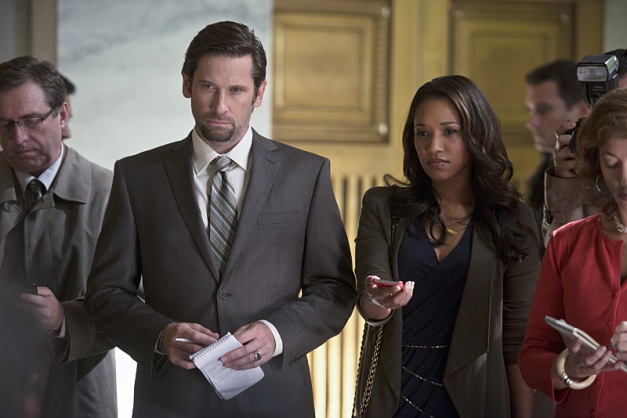 To give her more to do than simply write a blog and be stuck in the middle of the love triangle with Eddie and Barry, the writers attempt to give Iris a separate subplot as the newest reporter for The Central City Picture News. She’s paired with the paper’s talented, but arrogant Pulitzer Prize winner, Mason Bridge, who instantly loathes Iris for apparently desiring to be a reporter for more than her connections to The Flash. The show is normally great about evading cliches, but this Mason/Iris dynamic already feels tired barely an episode in — never a good sign.

Piper is ready to take out Wells, but wants to dispose of Flash first and calls him out on a toll road where he has plenty of victims to help keep Flash distracted. During this evening battle, Piper looks more like a Sith Lord than a super villain. Hopefully when he returns, Piper gets more green in his costume. I’m pretty sure viewers can distinguish between two green clad hooded characters in “The Flash” and “Arrow.”

Piper tapped into STAR’s files so he could learn Barry’s frequency and now that he’s learned it, he’s able to tune his gauntlets into a weapon that could obliterate Flash’s organs. Wells counters by tuning the various cars to another frequency using satellite radio to counter Piper’s sonics. It seemed a fairly cheap way for Piper to lose and even more so since Barry didn’t figure it out himself.

At STAR Labs, Barry tells Wells he’s earned their trust again and him the picture of the four of them. Back for more father figure bonding time, Joe tells Barry he appreciated Wells’ confession. Learning from Wells’ mistake, Barry tells Joe that no one could take his place. After they hug it out and Barry leaves, Eddie reports back to Joe after sitting the bulk of the episode on the sidelines. He’d been searching Wells’ place on Joe’s order. Joe is more convinced than ever that Wells is hiding something. Hopefully that something doesn’t end up getting Joe killed.

Cisco comes down to Hartley’s cell to visit. Hartley assures Cisco he won’t be staying long since he knows where Ronnie is and how to save him. Don’t do it Cisco!

Post-credits, Wells is wearing the tachyon device Reverse Flash stole trying to analyze why he can’t maintain his connection to the Speed Force. That’s a comic book reference to the energy source connecting all speedsters in the DC universe. His computer Gideon says he is not retaining the speed he’s collecting, but Wells isn’t worried saying the real endgame is almost here. That absolutely can’t be good for Barry.

0 thoughts on “The Flash the Sound and the Fury recap Ep.11”