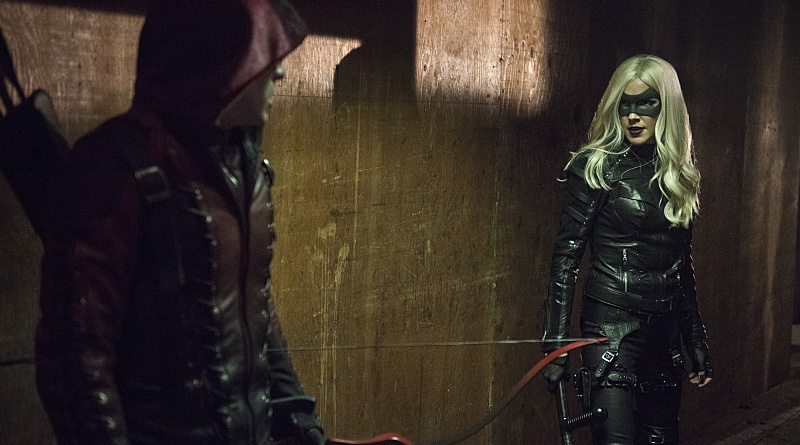 Last season “Arrow” had one of the great all-time seasons where you couldn’t find a weak episode as it steadily built a season-long arc that delivered with an extremely satisfying conclusion.

Don’t look now, but Season 3 may be even better. Even more impressively, this year has maintained the same level of consistent quality each episode even with the main character on the sidelines lately. Can you imagine multiple episodes of “The Flash” without Barry? “Agent Carter” without Peggy? “Agents of SHIELD” without Skye or “Gotham” without Batman… wait a second, bad example.

Oliver may be back from the dead, but he’s not nearly in any condition to return to being Arrow as he can barely walk around without assistance from Maseo and Tatsu. For now, Starling City will still have to be under the protection of the splintered Team Arrow. Nice to see Tatsu now has a hairstyle more like her comic book alter-ego Katana.

Back at Starling, Quentin Lance, Laurel, Ray and Felicity are meeting with the mayor and the aldermen to discuss Brick (Vinnie Jones) terrorizing the city. They don’t get to talk strategy long as Brick and his gang crash the meeting at gunpoint. Ray tries to fight back, but his hand to hand skills are lacking. Laurel fares a bit better actually subduing one of Brick’s goons, but Brick leaves out with three aldermen.

Ray jokes that he told Felicity he needs her help in crafting the A.T.O.M. armor, but she’s still not helping his “suicide mission.” Lance asks Felicity about Arrow and seems surprised when she says he’s gone, but he surprises Felicity by mentioning that Sara’s back in town.

With Oliver failing to kill Ra’s al Ghul, Merlyn is ready to get back on the run before the League tracks him down. First, he’s got to convince Thea to leave. Thea has just gotten readjusted to life back in Starling. She’s running Verdant (the club version, not the basement Team Arrow HQ) and has become intrigued by Chase, the club DJ. And despite Merlyn’s pleas, she doesn’t want to leave until she learns Oliver’s whereabouts. That’s going to be a problem.

Roy corners Merlyn and warns him that eventually Thea will remember that she killed Sara and see through Merlyn’s lies. Merlyn opts to come clean with Thea (somewhat) and tells her Ra’s is coming to kill him and everyone close to him.

Exhausting her district attorney options, Laurel suits up as Canary and tangles with some of Brick’s goons. She’s still learning though and Arsenal helps bail her out. Roy and Diggle are initially reluctant to accept Laurel’s help, but Arsenal is up for giving her a chance to join him in taking down Brick at his base.

Laurel still isn’t polished and she botched the “cool hero landing.” What’s been really engaging with Canary’s journey is actually seeing the making of a hero in a post-Arrow world. Oliver had his stuff together when the show started and his training with Roy in the ways of the vigilante arts was largely off camera so it’s fun watching Laurel learn on the job.

Diggle is advising them from Verdant, but he’s used to being in the field and certainly not aiding novices. This dynamic is great as it reiterates the importance of everyone’s role within Team Arrow. Canary nearly frees the hostages, but Brick throttles her and escapes in the getaway van. To leave a message, he kills one of the aldermen.

Interestingly, in the news report, they refer to Arsenal as “Red Arrow,” which is odd since Arrow isn’t called “Green Arrow” by anyone. Lance asks Laurel if she’s talked to Sara. This is not going to end well for Laurel.

Still reeling from the alderman’s death, Laurel has sworn off being Black Canary telling Felicity she’s not strong enough to fight for Sara, but Felicity says fighting for Sara and Oliver won’t work. Their mission is about saving the people who are still alive.

Brick wants the cops out of The Glades in exchange for the remaining aldermen. Vinnie Jones was such a great casting coup for the show. He’s been a perfect villain and the writers have wisely made Brick more than a one-off throwaway character.

Back at the cabin, Oliver is trying to convince Maseo to reunite with Tatsu and come to Starling City, but Maseo feels too entangled with the League of Assassins to leave. This is important later. Maseo was right to be concerned though as three League members find the cabin looking for Oliver. It doesn’t end well for the assassins as they get introduced to Tatsu’s katana and Maseo’s sword.

Felicity returns to Verdant with Laurel and this time they’ve got a better plan for stopping Brick. Laurel uses a gadget from Felicity to distort her voice to sound like Sara so she can get information from Lance. How cool was Caity Lotz to return for a voice cameo?

Arsenal/Canary vs Brick – round 2 goes much smoother for our heroes. Diggle pilots Ray’s helicopter while Felicity is back at mission control. After freeing the aldermen, Canary is cornered by Brick, but she hits him in the one spot he’s not invulnerable. That’ll end a fight quick. This was another smartly handled battle as Canary and Arsenal can’t take Brick down setting up that it’s going to take Arrow to stop his reign of terror once and for all.

In the Hong Kong flashback, Maseo and Oliver are at a club. Oliver thinks they’re just trying to find Tatsu, but Maseo has already struck a deal with China White. He’s giving her the Alpha compound in exchange for Tatsu. Oliver is disappointed that his friend would jeopardize thousands for Tatsu’s sake, but when China White tests the Alpha it’s a fake. Oliver is relieved, but Maseo tells him Waller switched the Alpha as he was fully prepared to do whatever it takes to save his family.

Thea doesn’t want to leave and makes Merlyn proud by suggesting that instead of running from Ra’s, they stay and fight. Thea tells Chase the reports of her leaving were totally untrue. Chase walks over to his DJ table and makes a call (in a non hipster DJ voice) … to Maseo to tell him Thea is not leaving. Uh oh. And what is the deal with Maseo and the blonde sidekicks??

Next Week: Oliver returns to Starling, but is he ready to be the Arrow again?