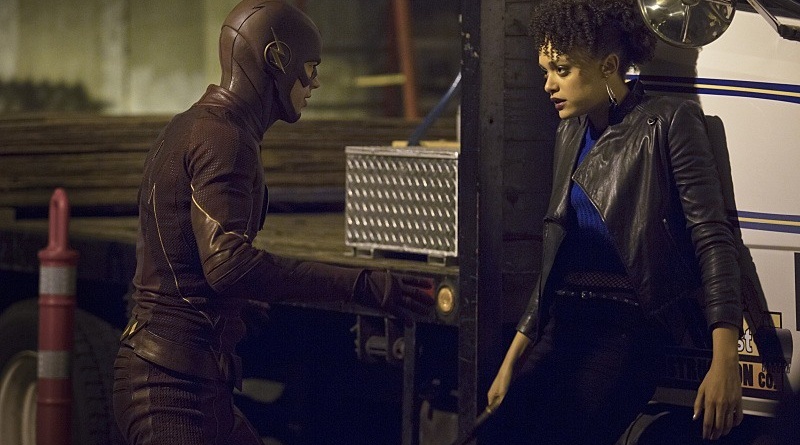 OK. Before I get back into geek out mode about this week’s teaser let’s break down what ended up being one of the series top tier episodes. Doubly impressive considering last week’s trailers made it appear like this would be the season’s throwaway episode. Silly me for doubting Team Flash (both in front of and behind the camera).

This week, The Flash tangles with Lashawn Baez (Britne Oldford) aka Peek-a-Boo , a small-time thief who gains teleportation powers and makes life miserable for our favorite speedster. Normally, I don’t care all that much about this kind of thing, but the show version of Peek-a-Boo is a lot lighter than the comic version and a rare time the casting somewhat bothered me this time.

Flash Fact: Peek-a-Boo is not a Barry Allen Flash Rogue, but a newer Rogue created by Geoff Johns in the comic to give the Wally West version Flash some new opponents.

Lashawn sneaks in to Iron Heights prison to spring her boyfriend, Clay (Micah Parker) in well-executed scene that recalls the spectacular opening act of “X2” where Nightcrawler attacked the president.

During their investigation, Barry’s dad and wrongly imprisoned inmate, Henry, just so happens to get escorted by thanks to a guard who owed Joe a favor. It was kinda odd that Barry and Henry didn’t hug considering they normally have a barrier during their interactions.

While Joe is at a loss for how Lashawn pulled it off, Barry finds some trace residual elements Team Flash analyses to figure out her teleportation powers. Cisco is a little less interested in this case though as he’s still considering Hartley’s offer to reveal what happened to Ronnie Raymond after the particle accelerator accident even after Caitlin tells him she’s ready to move on.

This week the writers focused on pairings we haven’t seen a lot of this season, but hopefully we’ll see a lot more in future episodes.

The first one was Cisco and Hartley. Of course, Cisco couldn’t resist keeping Hartley in with even the slightest bit of curiosity of learning about Ronnie’s fate. Hartley really has that whole Sith Lord thing going for him. The comic version has a predominant black scheme, but benefits from a green hood and it’d be just enough so Pied Piper isn’t another boring villain in black.

Costume issues aside, Hartley shows Cisco the bomb shadow of Dr. Martin Stein, who was also on site during the accident. Like any worthwhile heel, Hartley tries to take Cisco out while he’s distracted, but our guy is much smarter than he thinks as he whips out a device that wrecks havoc on Hartley’s overly-sensitive eardrums. Cisco teases his possible transition to the hero Vibe by telling Hartley he’s not the only one who knows something about sonics.

[irp]Hartley takes Cisco to a lab to witness surveillance footage of Stein holding a device when the particle accelerator explodes and shows Robbie merging into Stein. With his obligation fulfilled, Hartley knocks out Cisco and smashes his sonic device.

Caitlin is able to track Clay and Lashawn just as they finish robbing an armored truck under the watch of Blackhawks Security. Love the little Easter egg there for the DC Comics fighter pilot team. And we’ve got our first Flash vs Peek-a-Boo fight and once again, the fight scenes in the daylight work so much better for “The Flash.” While he’s just able to keep up with her teleporting, Barry narrowly avoids a bullet to the neck courtesy of Clay in one of the best shots showing The Flash’s reflexes.

While Barry is happy to learn he’s now faster than a speeding bullet, Caitlin is ecstatic to come up with a name for one of Flash’s Rogues. Barry rushes off to help Iris find a non-Flash story, but she’s heading out for a date night with Eddie forcing our hero to realize he needs to stop trying to save her. When Caitlin locates some of Lashawn and Clay’s old hang-outs, she decides to join Barry bar hopping.

Caitlin gets decked out and remarks after seeing Barry’s stunned expression that she doesn’t dress like a principal all the time and ever so happily asks the waitress to start a tab. Fast forward a bit and Caitlin’s drunk and ready for a karaoke duet and shockingly Barry can sing pretty well. While Caitlin runs off to the bathroom, Linda Park (Malese Jow) introduces herself and gives him her number. First, Barry steals Wally’s Rogues and now he’s taking his girl! Not cool Bar, not cool.

Caitlin returns and realizes she has had one too many and needs to get home. Only problem? Vodka and super speed don’t mix. Back at her place she starts to get undressed for bed while an embarrassed Barry looks away. She asks if he took a peek and says he deserves a peek for all the good he does for the city. Forget Linda or Iris. We need Caitlin and Barry together stat!

And here’s where the writers are starting to back themselves into a corner. Barry and Caitlin are awesome together and seem like the most natural pairing on both Arrow and The Flash. I’m totally now rooting for Barrylin (?) Catbar (?) I’m terrible at these combo names. 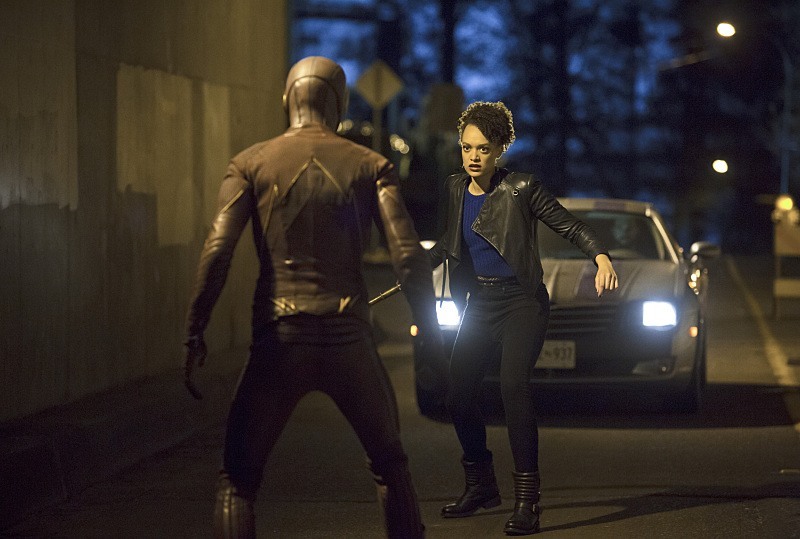 Henry was able to get some information from his cell block mates and tips Joe off, but Clay and Lashawn escape the raid and Henry gets stabbed for snitching. Barry and Joe rush to check on Henry, who says he just wanted to help his son out since behind bars, there’s few times he gets to be useful. It’s really to everyone involved that these characters feel far more lived in than the 12 episodes we’ve gotten thus far.

Flash tries a little intimidation tactics on Henry’s attacker — no doubt making his pal, Arrow, proud — and is able to chase down Peek-a-Boo and Clay in a tunnel. Surprisingly, this is one of the series’ best fight scenes rivaling “Arrow vs. Flash” as the action takes full advantage of Peek-a-Boo’s porting and Flash’s speed. Wells reminds Barry that she needs to see where she’s teleporting so Flash knocks out all the tunnel lights. When he returns to the getaway car, Peek-a-Boo is sitting stunned that Clay left her.

Barry, Cisco and Caitlin put her in a one-way mirrored cell. It is really time for a prisoner update via wide shot just to remind us who is in there. Right now it just looks like this massive containment unit only has space for one prisoner who breaks out as soon as they’re captured…except for The Mist. Barry and Caitlin have a little more tension as they both agree it’s time to stop holding the torch for Iris and Ronnie.

For Barry, that means giving Iris a scoop as The Flash that Clay is still on the loose. Iris uses that moment to snap a shot getting the exclusive first picture of The Flash. This kinda goes against her whole complaint that the paper only wants her for Flash news though, doesn’t it?

A bit later at the newspaper, Iris is surprised to see Barry there as she didn’t recall them having a meeting. They didn’t. He’s there for a date with the paper’s sports reporter, Linda Park. In yo face Iris! A bit later, Barry has a quiet moment at the prison infirmary visiting Henry, who hints that he knows The Flash’s identity and tells Barry he’s very proud. Whenever John Wesley Shipp makes an appearance you’d be advised to keep some Kleenex close by.

In our post-credits, we don’t get the latest in the Wells/Reverse Flash mystery. Nope, we’re in the sewers as two guys have flashlights trained on a wall with “Grodd” randomly scribbled along a wall. They start hearing some grunting and then they see a massive gorilla. Oh my! Gorilla Grodd is coming!!! Somebody warn Team Flash.