Peggy gets relieved of coffee duty and gets back to the battlefield in the most exciting episode yet.

We kick off with a Russian young girls camp where the precocious tykes are handcuffed in their beds before watching cartoons and training sessions — to the death. Ah, it’s fond childhood memories of Dottie, the latest border at The Griffith. She’s hanging with Peggy making plans for a tour of the big city. Peggy’s been desensitized hanging with Angie that she doesn’t suspect anything even after Dottie “accidentally” knocks over her purse and steals her key. 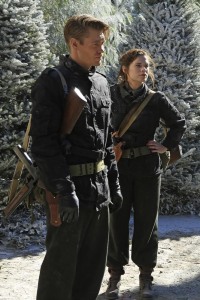 Jarvis spots Peggy at the newsstand and tries to get her back on Team (Howard) Stark, but she’s having none of it. Instead of running errands for Stark, Peggy says she’s going to earn the respect of her co-workers at the SSR. Peggy’s in luck as the magic typewriter has delivered another message and the code breaker brought in can’t crack it. Peggy deciphers that Leviathan is delivering payment to Stark in Russia. Dooley gives Thompson and agents Li and Martinez the assignment, but Peggy isn’t sitting on the sidelines this time and wants in on the mission.

Despite Thompson’s protests, Dooley agrees if Peggy can get the 107th Division aka The Howling Commandos to serve as backup. They’re game and Peggy’s got a mission. Peggy doesn’t want to waste time traipsing downstairs to the ladies’ room and gets dressed with the men, which annoys Thompson a bit so he sends Sousa over to Peggy’s side for  his compass.

But while he doesn’t get much of a show with Peggy’s darn near ankle length slip, Sousa does notice a mark on Peggy’s shoulder and it immediately triggers his memory of a similar mark on the mysterious woman in the photo. Sure enough, he pulls up Peggy’s files and it’s a match to the photo. Sousa is flabbergasted, but is it really that hard to believe that two women have marks on their shoulder?

Thompson is nervous about heading back in the field, but Peggy reassures him he’ll be fine. Like watching old teammates reunite, Thompson finds himself the odd man out as Dum Dum Dugan, Pinky Pinkerton, Sam Sawyer and Junior Juniper reminisce with Peggy, who’s thrilled to be around people who consider her an equal. The interactions between Peggy and Dum Dum really make me wish more of “Agent Carter” focused on her on the battlefield as opposed to sneaking around the bumbling SSR guys.

Peggy encourages Thompson to share a war story. It’s a smart political move by Peggy as Thompson’s story on how he saved his fellow soldiers from a Japanese attack earns him some respect from the Commandos.

Dooley meets a pal for drinks. But it’s not just any pal, it’s Lionel Luthor (John Shea from “Smallville”). Don’t trust a word from his lying mouth Dooley!! to discuss The Battle of Finaul. Lionel tells him Stark was there to clean up the mess and got into a physical altercation with a general, then shortly found himself out of a contract with the military. Dooley finally begins to suspect that Stark isn’t the traitor he’s been made out to be and tracks down Jarvis to offer his number so Stark can share his side of the story.

Back in Mother Russia, the Commandos reach the meeting point. While Thompson would like to think he’s in charge, they defer to Peggy’s lead and he somewhat reluctantly goes along with her plan. Peggy’s team of Dugan, Juniper and Li stumble into the same barracks Dottie formerly called home. There, they find a young girl crying, but it’s a trap as she stabs Dugan (his bulletproof vest takes the brunt of it) and kills Juniper. Yikes. She escapes through a vent and Dugan at least shows some smarts by wanting to send a grenade after her. Peggy seems to have forgotten her wartime training saying “she’s just a girl.” Don’t think Juniper’s family will be too thrilled to hear that Pegs.

Further in the camp, the Commandos reunite to find two men locked in a cell. One is a brilliant inventor tasked with creating a super weapon using stolen Stark blueprints. The other is his psychiatrist. Just as Peggy frees them, Leviathan soldiers emerge. In the ensuring shoot-out, the girl returns and kills Li (that death was on you Peggy!) and Thompson freezes up. Our hero. The inventor grabs Sawyer and offers him to Leviathan, but the shrink shoots him and we’re back to a stand-off until Dugan, Pinkerton and Martinez make a last minute save. The best part was Peggy’s response after Dugan’s howling entrance “Stop woo-hooing and help!” Peggy has to darn near carry Thompson out as he can barely get it together.

After Peggy says her goodbyes to Dugan, Pinkerton and Sawyer, she joins the doctor, Ramirez and Thompson back on the flight home. Thompson is still out of it. He confesses his heroics are all a fraud. The soldiers he killed to gain his medal were surrendering and he buried their white flag before anyone else could see it. Worse, he knows he’s a sham and is struggling to live with his lie every day. 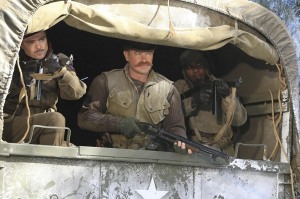 While Peggy was in Russia, Dottie snuck into her room. There’s some exceptional music throughout this scene. One question though: What’s she looking for? She finds Peggy’s pics of Stark equipment and seems especially intrigued by the picture of Steve Rogers. Back in her room, Dottie snaps a handcuff on and chains herself to bed. But that’s a mystery for another episode.

Thompson tells Dooley about Carter’s efforts and grateful for her not ratting him out, he invites her out for drinks with the guys. Peggy finally has won the respect of the office. Only catch is Sousa is convinced now that Peggy is the lady from the picture. Hope that won’t ruin her career advancement in the SSR.