Kathy Kay Dee is my kind of cosplayer. She’s a huge Star Wars fan and has really tackled the challenge of constantly improving her costuming efforts. I’m a huge fan of her work and you will be too after checking out this week’s Cosplay Confidential! 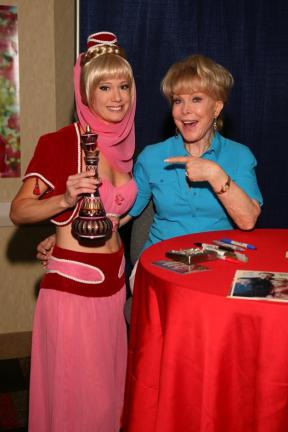 How did you get into cosplay? My hobby of making costumes started with Halloween. I was not happy with the quality of store bought/rental costumes and decided to begin making my own.

When Star Wars Ep II was released I decided to make one of Padme’s costumes, and while I looked for reference images on the internet I was delighted to find there was a costuming forum with other fans making Star Wars costumes!

They encouraged me to attend some conventions, so that’s basically how Halloween costuming turned into convention costuming (or cosplay).

How long have you been doing it? I made my first costume thirteen years ago.

What was your first costume? I Dream of Jeannie 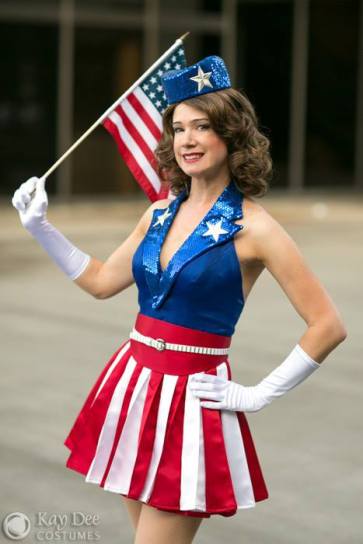 What’s been your favorite? It is impossible to say one is my favorite; I like all my costumes for different reasons. I loved performing the USO Dance in my Captain America Dancing Girl costume at Dragon*Con a few years ago and organizing our parade participation.

I’ve had a lot of great experiences in my white Princess Leia dress varying from hospital visits, to being part of the “Course of the Force” event at Skywalker Ranch! I also love going to Disneyland, so the Cinderella and Pirates of the Caribbean Redhead costumes were a great deal of fun to wear at their Halloween events.

What was the hardest costume you’ve done? My Padme Amidala Episode II Purple Senate dress was the most difficult and time consuming costume. I had to dye some of my own fabric, hand embroider the sleeves and skirt, make a headdress, draft my own coat pattern with piped seams, etc. I had to learn it all as I went along and it was an ambitious undertaking for my skills at the time. 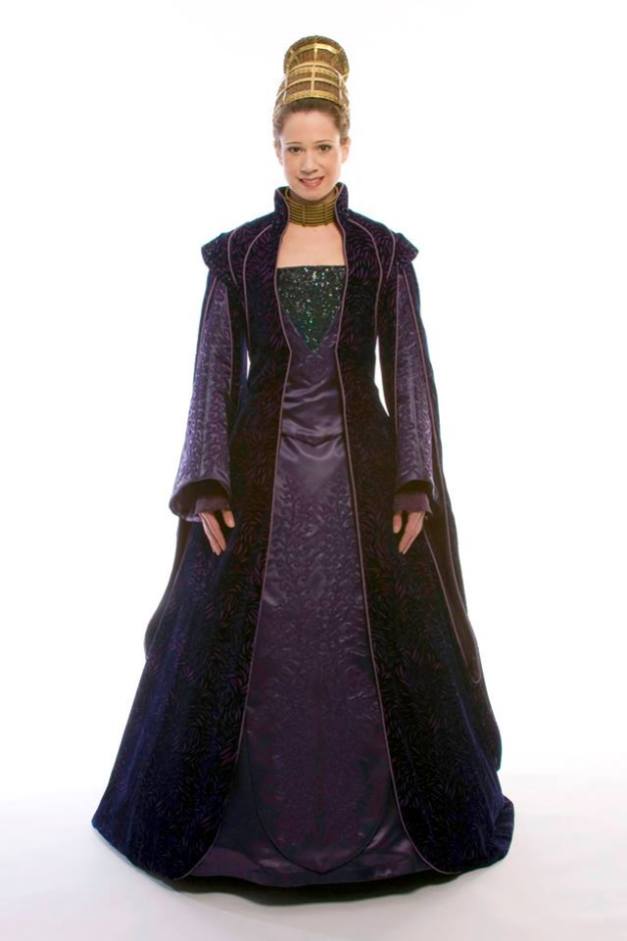 How much time does it take to make an average costume? It really depends on the costume complexity and the number of items that need to be constructed. My Padme Senate Dress was something I worked on and off over the course of a few years. I worked around the clock for about a week and a half to two weeks to make my Captain America USO Girl costume, but that does not include the research time and the numerous shopping trips looking for the correct fabric. I suppose the simpler costumes from concept and research phase to finished product can take on average a month to month and a half to complete if I am able to work very steadily. My Pirates of the Caribbean Red Head costume which included a scratch built hat took me nearly 2 months from fabric gathering and research to completion.

How much money do you typically spend on your outfits? I’ve stopped keeping track of most of them because it just gets a little scary to look at the numbers. Sometimes there is trial and error that eats through supplies that are not used on the final garment but in reality do factor into the cost of the hobby. Some costumes that have helmet and armor kits are well over $1,000 on once the entire costume is assembled. Then there are things like the Captain America USO girl which I easily spent $200 – 300 on all the fabric and accessories (this is including a decent wig which alone can range from 60-100 dollars).

What makes it so rewarding? There is a great feeling of accomplishment when you are able to create something yourself. The rewards are beyond just making a garment though. The costuming and cosplay hobby is also a social one and I’ve made many good friends who share a similar interest. I’ve had a few opportunities to perform in masquerades at conventions and march in parades so it’s been a lot of fun. It’s also very special when we are able to do charity work, or visit children in the hospital to bring a little more cheer to their day.

Do you have a regular group you partner up with for costumes? I have joined a few Star Wars clubs such as the 501st and Rebel Legion so I’m able to frequently participate in events organized by those groups. I also helped found the Captain America Dancing Girls costume group – that one really just evolved by asking friends on Facebook if they would like to make the costume for Comic-Con and Dragon*Con and to spread the word.

So then we had friends of friend of friends joining and the group keeps growing to this day! Sometimes I will have friends I’ve made through one group (perhaps a Star Wars group) ask if I’d like to join them for a totally different costume group idea for a convention (like, a Captain America First Avengers Group) and we team up that way. The groups just flex and evolve from year to year.

What would you say to people who have thought about doing cosplay, but haven’t quite worked up the nerve yet? I was very self-conscious when I started out, I’d only vaguely heard of the super geeky types who dressed up at Star Trek conventions (The “Get a Life” William Shatner skit from Saturday Night Live was all I really knew).

You just have to know you won’t be alone, and you won’t be out of place at the appropriate event like a convention. Get involved in some of the online costume communities in the genre that interests you (There are many on Facebook, and there are still quite a few costuming forums out there).

You may get to know people online who you can meet up with at conventions for group photo shoots and other activities. That’s how I eased into it. Most people really do love to see others dressed in costume and tend to give positive feedback. I was surprised; I expected to hear “Get a life” but instead kept hearing “Great Costume!”

Do you have a website people can check out more of your costumes? My Facebook Page is https://www.facebook.com/KayDeeCollectionCostumes My web site is: http://kay-dee.net/costume/