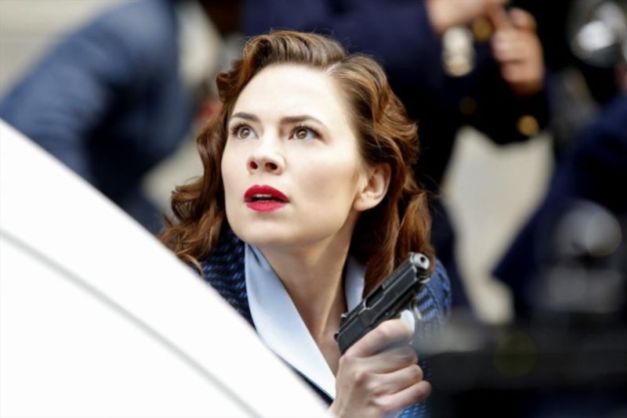 “I know my value. Anyone else’s opinion doesn’t really matter.”

While it took everyone’s second favorite World War II era hero eight episodes to learn a lesson the audience understood midway through “Captain America: The First Avenger,” Peggy Carter’s journey and subsequent realization of self worth made for a well-earned finale to a fun mini-series. And while a second season may not be assured due to decent, but not spectacular ratings, Peggy’s solo adventures made for essential viewing for any Marvel fan.

Things were looking bleak at the end of last week’s episode with Dooley’s sacrifice, the SSR in disarray and Dr. Ivchenko and Dottie unleashing Howard Stark’s rage gas unto an unsuspecting theater audience. 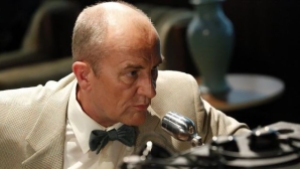 Peggy, Thompson and Sousa investigate the carnage at the theater with Sousa accidentally triggering the mechanism and getting a whiff and going after his teammates until he’s knocked out. Back at SSR, Peggy learns Ivchenko’s real identity, Dr. Johann Fennhoff, as well as another side effect of the gas severely damaging vocal chords. That explained why Leet Brannis and Sasha Demidov rarely spoke when she encountered them way back in episode 1.

Before the SSR can figure out their next move, Howard Stark (and Jarvis) arrive. Although Fenhoff has been exposed as the real villain, Stark is greeted by gunshots and Thompson starts laying in to him for Dooley and Krzeminski’s deaths. Stark explains he developed the gas for the U.S. Army as a means to help soldiers fight through fatigue and not need to sleep for days at a time, hence its nickname  — Midnight Oil. But in the side effect of all side effects, it just exacerbated the symptoms of a lack of sleep including severe irritability and violent outbursts. Still stinging from Peggy’s comments that he’s self-absorbed and completely selfish, Stark’s ready to assume responsibility for his unintended role and volunteers to be used as bait to lure Fennhoff and Dottie. 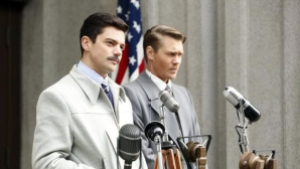 As those plans never work right, Stark gets captured after Dottie distracts the SSR with an automatic firing machine gun. Turns out Fenhoff has had such a mad-on for Stark all this time because his brother was at the Battle of Finow and he died a gruesome death. Now, Fenhoff wants some payback and he hypnotizes Stark into taking one of his planes and unleashing Midnight Oil over New York City on V-E Day. I love this plan. It’s such a throwback villain plot and while too simple for the Marvel movie heroes or even SHIELD, it works perfectly in the context of “Agent Carter.” There’s a nice little running joke where Stark tries to remember Dottie’s name.

Team SSR arrives to Stark’s hanger too late to stop him from flying off so it’s time for Plan B. In this case, it’s Peggy laying the smackdown on Dottie in a way too brief fight. This was the big showdown we’ve been anticipating since Dottie’s reveal as one of the series’ main villains and it takes Peggy less time to beat her than it did the SSR agents trying to bring her in (in “Sin to Err”). Peggy sends Dottie crashing through a window presumably so the writers can bring her back for season 2. Thompson and Sousa try and track down Fenhoff, but Fenhoff ambushes Thompson and starts working his hypnosis on Sousa, who proves to be one of the show’s smartest characters by stuffing his ears to block out Fenhoff’s spell. 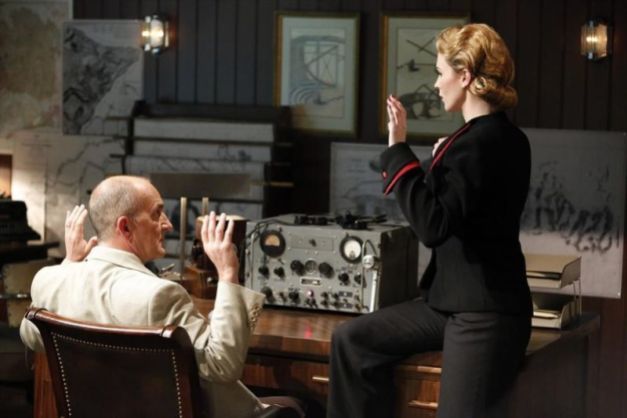 With the bad guys beaten, Jarvis is flying after Stark reluctantly prepared to shoot Stark down in order to save the city. Peggy gets on the hanger mic to try to talk some sense into Stark, who is envisioning he’s on a mission to rescue Captain America. It’s fitting then that Peggy’s big moment of the series recalls her greatest tragedy. Once again, she’s in front of a microphone fighting through tears trying to convince a loved one not to leave her. With her dear Steve Rogers, Peggy couldn’t do anything to save him, but she has a chance with Stark. Peggy breaks through Fenhoff’s hypnosis by helping Stark remember that their friend and close ally is dead and no one can save him. It’s a cathartic moment for Peggy and now she seems able to move on with the rest of her life.

Back at SSR HQ, Peggy arrives to a hero’s welcome complete with applause and handshakes. Peggy has finally earned their respect, but as she tells Sousa after a city official lavishes all the praise on Thompson — who isn’t about to correct him — she doesn’t need the accolades or approval. She’s just fine on her own. Sousa finally works up the nerve to ask Peggy out, and while she’s got plans, Peggy is happy with the offer. We do know that Sousa was a WWII vet who easily could have been saved by Captain America to go on to become Peggy’s husband… 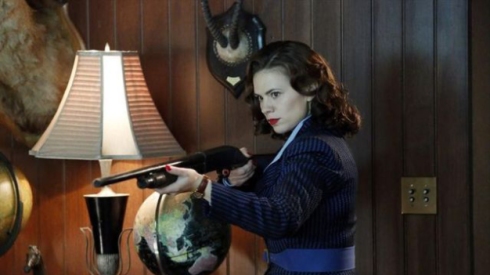 Peggy’s appointment was meeting up with Jarvis and Angie, whom Stark is allowing to stay at his place in thanks for their help. Angie’s geeked about all the posh surroundings, much to Jarvis’ delight. Angie leaves out to heed J.K. Simmons’ advice and call her mother leaving Jarvis and Peggy to have one legitimate quiet moment. Of all the relationships of the show, I’m going to miss this one the most. Jarvis assures her all she need do is ask and he’ll be there for her and he gives her the vial with Captain America’s blood. It’s a nice gesture, but Peggy now has all the closure she needs and goes to a bridge and pours out the vial and says “Goodbye my love.” It’s a elegant final look at Peggy for this season capping a tremendous showcase for Atwell.

And because it wouldn’t be a Marvel production with an ominous post credit scene teasing something in the larger tapestry of the Marvel Studios universe, we get one here and it’s a doozy.  Fennhoff gets the Hannibal Lecter mouth restraint treatment, but he’s greeted in his cell by his new roommate Arnim Zola (Toby Jones!) who wants to talk about all the wonderful opportunities for evil the two will have in the future. Hail Hydra!

These eight episodes have flown by far too quickly and as I feared as “Agent Carter” really got going, I’m far more interested in following along with more of her adventures than resuming the “Skye is even more special now because she’s an Inhuman y’all!” storyline going on in “Agents of SHIELD.”  Hopefully news on a second season will be coming soon.