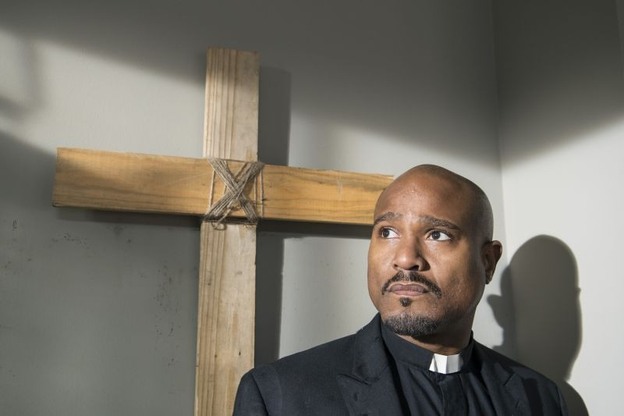 For viewers wanting a lot more bloodshed, action and trimming the fat character-wise, this was probably the most satisfying episode since Terminus. Those looking for significant advancement to the Alexandria storyline got some welcome developments this week as well. As for the rest of us who are happy to go along with every twist and turn that’s become an exciting Season 5, this furthered the case that this might be the best season of the series yet.

Initially, this episode is a catch up of all the C Team members of The Grimes Gang. Noah wants Deanna’s husband, Reg, to teach him how to build things while Gabriel is ripping out pages from a Bible. Not a good look Father. Eugene and Tara are tagging along with the supply run crew of Glenn, Noah, Aiden and Nicholas to find parts to help restore the fading power grid. Eugene would prefer not be dragged along on a potentially life-threatening mission, thank you.

Rick aka The Homewrecking Constable checks in on Jessie, who isn’t her normally perky self after discovering someone broke the owl sculpture she’d been working on. She subtlety hints that this kind of stuff doesn’t happen in their community … at least until the Grimes Gang arrived. Pete stops by for a chat with Rick, which is clearly setting off our constable’s Spider Sense. Pete wants to be friends and comes offering booze and a reminder that the kids need a check-up, but Rick is noncommittal as he seems to prefer his doctors sober. Beggers can’t be choosers, Rick… 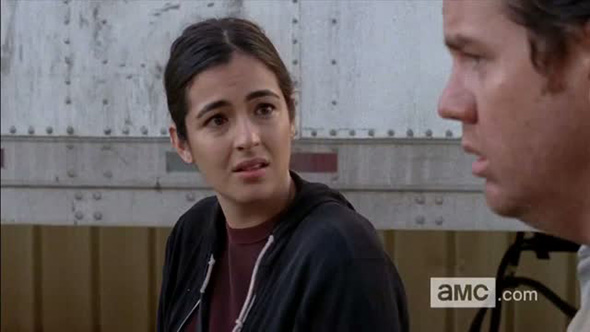 Tara tells Eugene he needs to start pulling his weight. Think about how low on the totem pole Eugene is now that Tara is telling him he needs to do something useful. Eugene is fine accepting the credit for leading them to Alexandria if only someone would recognize that they wouldn’t be in their happy place now without him.

While he started off as a douche, Aiden has smartly fallen in line and trusts Glenn expertise as they go through the warehouse and check the perimeter for any ways the walkers could trap them.  Unfortunately, Glenn didn’t have time to teach Aiden not to shoot at armored walkers carrying grenades. The explosion impales him and Nicholas already left him for dead. Tara’s badly wounded and Eugene freezes up when walkers come her way, but Noah and Glenn make the save. Is this gonna be the episode we see worthless, cowardly Eugene end up getting someone killed? 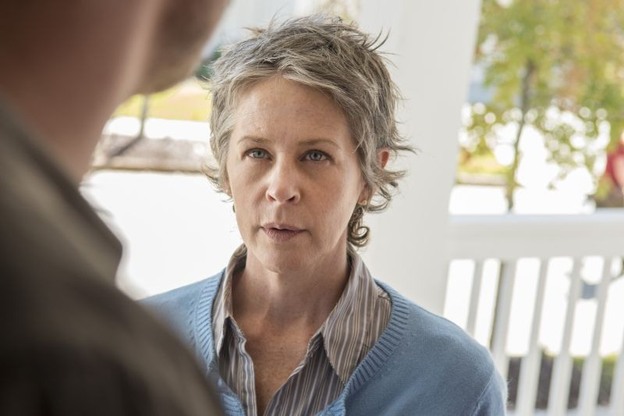 Back at the Mayberry block of Alexandria, Carol finds Sam the Cookie Monster feigning for another hit of those delicious cookies. I’m getting the sense that as a chef, Jessie is a heck of a sculptor. Carol doesn’t bother keeping her facade of the happy homemaker with Sam — is it because he reminds her of Sophia or Lizzie — and wants him to beat it. Sam asks if she can at least show him how to bake the cookies so he can learn how to do them himself. Of all the Grimes Gang, Carol has been the most focused on the task at hand – sizing these losers up and figuring out their angle before anything happens to her friends. Like Jessie for Rick, genuine friendship for Daryl and a sense of peace for the others, Sam may be the one to break Carol’s resolve.

As they bake, Carol shares that she baked when she was sad, no doubt referring to her former life as a battered wife. Sam reveals that when he’s sad, he gets destructive. Hide your owl sculptures!!! Sam asks Carol why she took the guns and is comforted to know it’s for protection. He’d like one too then, but runs off when Carol asks who needs protection. Carol goes to Sam’s to speak with Jessie, but Pete comes to the door saying now is not a good time. Uh-oh. 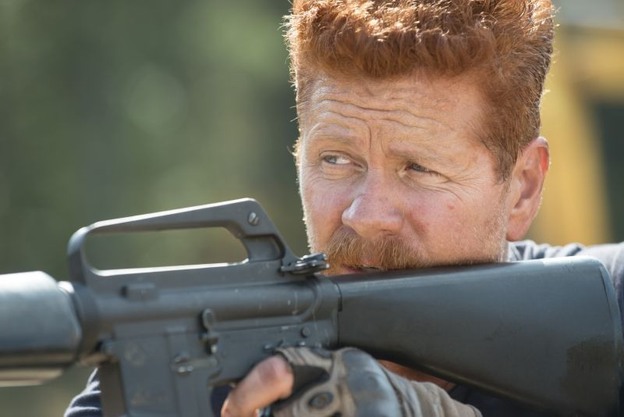 Abraham has gotten himself a job — gathering sheet metal for the wall additions beyond the city gates. He’s hardly domesticated yet as birds flying in the opposite direction tips him off to a walker attack. Dinner parties be damned, now he’s in his element. When one Alexandria resident, Francine, accidentally gets knocked from her lookout spot, the others are set to leave her, but Abraham won’t leave anyone behind allowing us to see a bada$$ scene where he crawls under a crane and snips off walkers trying to follow him before grabbing an axe and slicing walkers up. Rallying behind Abraham, some of the other workers come to his and Francine’s aid. Abraham is tired of worrying about politics and assumes command of the work zone. He’s gonna whip them into a well-trained elite force yet. This would explain this episode’s lack of Daryl and Michonne — we can only spotlight so many of the show’s most competent fighters in a 60-minute span.

On the other side of that is Eugene, who’s left in an office to care for Tara while Glenn, Noah and Nicholas try and rescue the pincushion that used to be Aiden. Nicholas apologizes, but recognizes a lost cause and runs off while Glenn vainly tries to pull Aiden off. Aiden reveals that Alexandria has a severe case of the wussies as they panic under pressure and leave others behind in the face of danger. I had to wonder if that revelation is why Glenn didn’t bother putting Aiden out of his misery instead of letting the walkers chomp away and rip his intestines out?

Eugene meanwhile grabs Tara and heads out the office shooting the walkers like most of us probably would — let’s face it, we’re all leaning a lot closer to Eugene than Daryl on the walker killer scale. 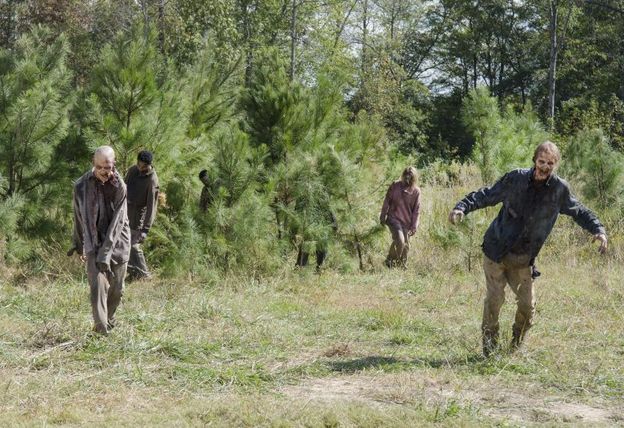 Nicholas, Glenn and Noah are faced with few options and try the revolving door to get out of the warehouse, but it’s jammed with walkers. This is a frightening proposition and one of the more “oh shoot” predicaments we’ve seen thus far. Nicholas on one side while Noah and Glenn are in other partition. Just when hope seems lost, Eugene pulls up with the van and tries to lure the walkers over to him. A few bite, and Glenn sees an opening, but he needs Nicholas to do his part. Oh Glenn, ever the optimist. Nicholas, like a good Alexandria citizen would, panics and just squeezes through allowing the partition to swing and the walkers to grab Noah who may have gotten the most gruesome death of the season, if not the series as the walkers bite into him and tear his jaw off!

This season has not been kind to the black guys on the show. We started with Bob and Tyrese, then added Noah and Gabriel to the mix and now we’re only left with that worthless Gabriel. Nicholas heads to the van, but Eugene is feeling froggy and asks where the others are, fumbling to draw his gun on the coward who makes him look better by comparison. Glenn rushes over and knocks out Nicholas. Who else just wanted Glenn to kill him and avoid the chance of Nicholas getting some payback that costs Glenn something even more than his good friend. Kinda stinks how Noah’s quick death rendered Beth’s sacrifice so meaningless now, huh?

Tobin, the foreman reports to Deanna about Abraham saving Francine and showing he’d be a far more effective foreman. Deanna starts to have some second thoughts as The Grimes Gang is taking over. Deanna, that’s just called having competent people in place. Maggie, who’s serving as Deanna’s adviser, reminds her that’s why The Grimes Gang is here. 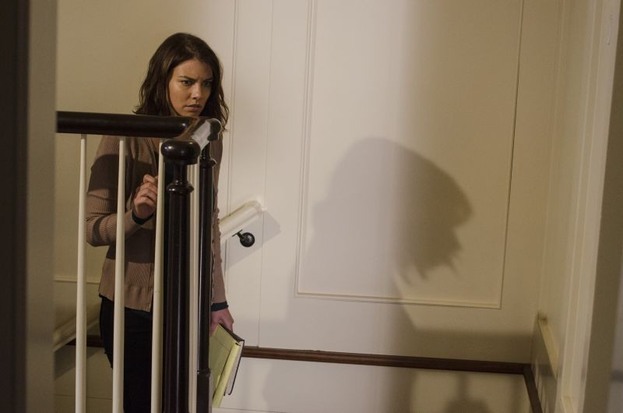 Gabriel, clearly the one member of the Grimes Gang that would be right at home with the rest of Alexandria, goes on full snitch mode telling Deanna that Rick’s group is pretty much the devil. Neither are aware that Maggie is hearing all of this from the stairway. Gabriel’s warning is juxtaposed with scenes of Abraham giving orders and Carol telling Rick that Pete’s beating on Jessie and maybe Sam. One day Gabriel warns they’ll take over and will destroy the paradise they’ve built. Carol also has a warning for Rick saying they both know how his has to play out — Rick’s gonna have to kill Pete. This Takeover may start sooner than we thought.

There seemed to be more stories to explore with Noah and Aiden, but their shocking deaths will only serve to create greater problems with Rick’s gang and the citizens of Alexandria. And just how will Deanna react when she learns her son was killed?

This was another crazy and surprise-filled episode. The potential repercussions have me very intrigued for next week.