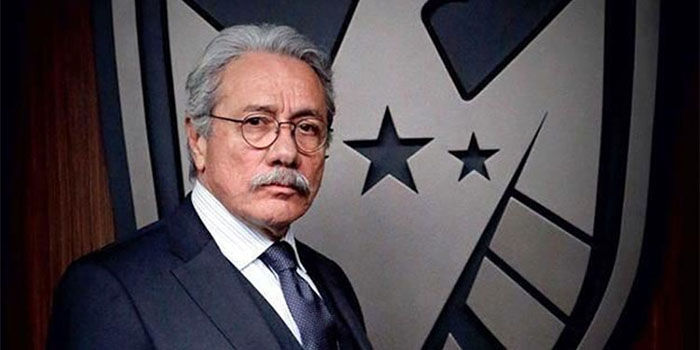 ‘Agents of SHIELD’ is always a lot more fun when it’s got a lot happening and the characters are involved in numerous subplots that tie more into the Spy vs. Spy realm as opposed to forcing Marvel movie tie-ins. And while this episode was mainly used as a set up outing, it worked better than most this season thanks to some intriguing developments and the return of everyone’s favorite traitorous agent.

There was a lot of activity this week — mostly good — and it helped feel like there’s finally something to look forward to following the Inhumans revelation. 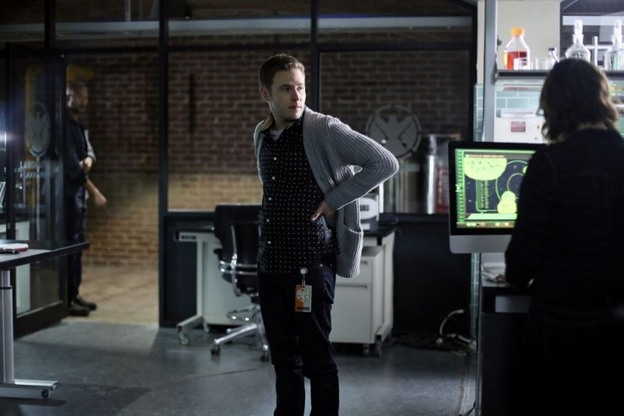 Fitz and Simmons are in the midst of one messy ‘divorce.’ They can’t get on the same page on anything, especially how to handle Skye and her earth shattering powers. Skye starts losing focus watching Mom and Dad fight and the room starts shaking further supporting Andrew’s take that Skye needs to be removed from active duty. May, who has never been one to get too bogged down with emotional connections to folks, agrees it’s the right call even if Coulson is a bit more reluctant.

Rather than drag the “is Skye too dangerous” subplot out any longer, Coulson does accept the recommendations and takes her to one of Nick Fury’s safe houses, formerly the resting place of one Rogers, Steve. Those are nice subtle tie-ins to the larger Marvel Cinematic universe and the writers are doing much better with the movie references. 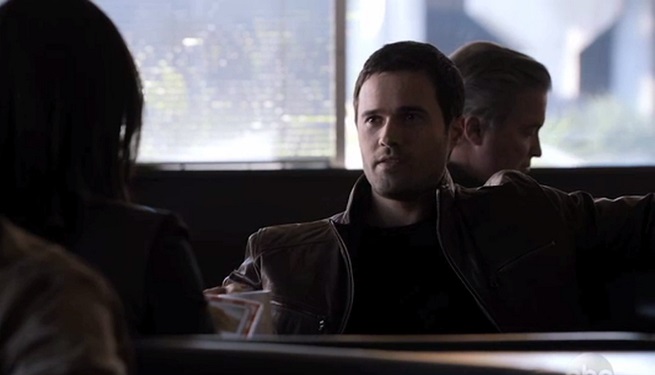 While Skye is being shut down, Ward is ready to get back into action. He’s still hanging with Agent 33, who rescued him after Skye left him for dead. Ward helps Agent 33 reconnect with the tech surgeon who created her nanotech mask and now she can store up to three faces at a time in essence becoming the toy version of Man-E-Faces.

Agent 33 is getting emotional and wants to repay Ward’s kindness by giving him exactly what he’s always wanted changing her face to resemble Skye. Further proving he’s up to something, Ward says he doesn’t want Skye, May or anyone else, but the real Agent 33.
It’s hard to buy Ward’s display of compassion here especially after he lies to Agent 33 about his last meeting with his family, even making a sly joke about really digging in — a reference to burying his brother, Christian. 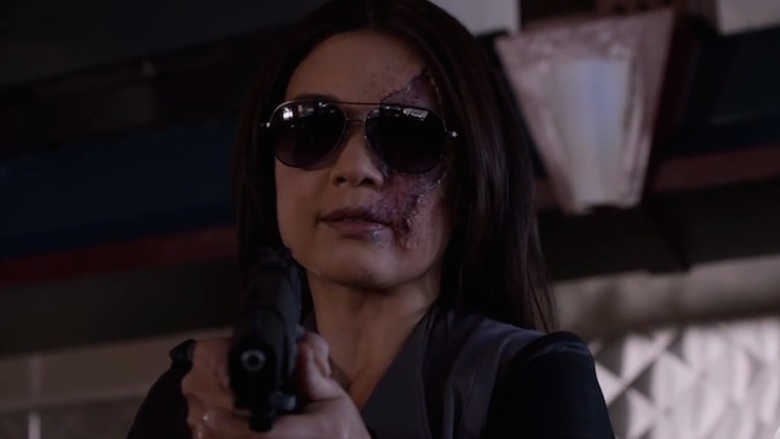 Ward is ‘SHIELD’s’ version of Harrison Wells from ‘The Flash.’ He’s constantly scheming and manipulating things in his favor making him the show’s most interesting character. He suggests Agent 33 go after Sunil Bakshi, the Hydra agent who kidnapped her and turned her into a Hydra lap dog for Whitehall.

To get to Bakshi though, they’ve got to break into an army base under the control of Gen. Talbot (Adrian Pasdar). With a lot of ‘Mission: Impossible’ style misdirection with Agent 33 and her mask, they break Bakshi out. Pasdar is playing Talbot a bit more theatrical than before as he rounds up the female soldiers to find Agent 33. It’s played a bit more for laughs than you’d expect, but it works. Back at their hideout, Agent 33, who now remembers her actual identity and face, and Ward are brainwashing Bakshi to make him compliant. Not sure what the end game is, but it’s an intriguing storyline to watch unfold.

In the episode’s most questionable subplot, Mack brings Hunter to alternate SHIELD HQ and brought before its inner circle, led by Robert Gonzales (Edward James Olmos). Gonzales says they formed the “real” SHIELD as Nick Fury was keeping too many secrets and upon his death, Coulson maintained status quo. While he was a good agent before he was given alien blood, Coulson’s reckless quest for the alien city led to major problems specifically the death of Gonzales’ close friend Izzy Hartley. That’s a nice callback to the first episode of this season, but the reason for SHIELD ver. 2’s existence still felt underwhelming. 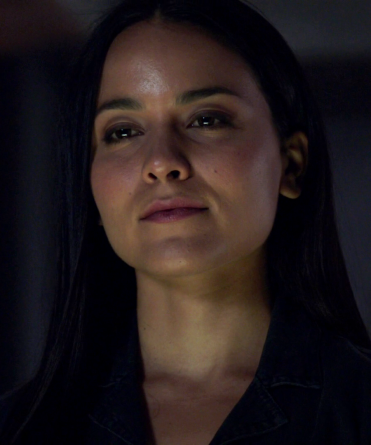 Mack returns to original SHIELD to maintain his cover, but May questions him on Hunter’s whereabouts. Mack’s excuse is about a 4 on the Simmons Terrible Liar chart and May barely hides her suspicion.
Hunter wants Bobbi to run away with him, but like always, she’s more committed to her mission than Hunter so he tries to escape. After fighting off two (poorly trained) SHIELD guards, Hunter finds the new base is on an aircraft carrier stocked with new quinjets and everything. Who is funding this operation?

By the time Bobbi follows after him, Hunter has escaped and on his way to the surface. I’m not feeling real secure with SHIELD ver. 2.0 if Hunter can escape simply by dealing with two guards. Bobbi wants to go back undercover in Coulson’s unit and take down the threat of Coulson once and for all despite the warning that Hunter could blow her cover in as soon as 12 hours. “I only need six.” It was a cool line, but I’m leery on the payoff.

At original flavor SHIELD HQ, Fitz wants to know where Skye is and questions Simmons. She reminds him their lack of taking the proper precautions led to Trip’s death and he suggests Simmons is terrified after the changes to both himself and Skye. Kinda think Simmons has a point when you put it like that, Fitz. 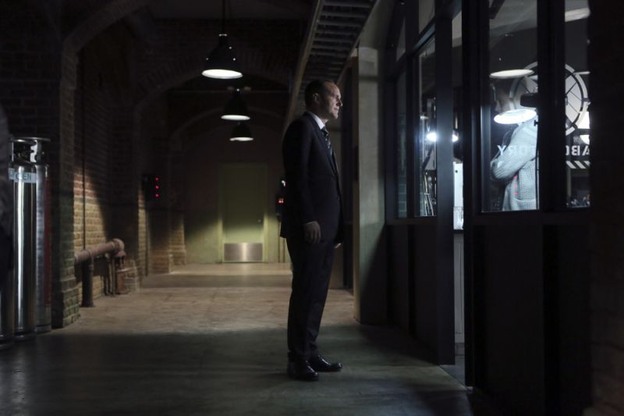 Talbot gives Coulson and May an update on the Ward sighting and Coulson wonders if he mishandled the Skye situation. If for no other reason than to keep her away for an episode, you did just fine, Phil. Turning to more important matters, Coulson and May share notes on Mack. Neither trusts him and it’s time to find out what’s going on. Next week should prove very interesting as the two SHIELD forces appear to be on a collision course. This was a very solid set-up episode and one that should lead to some significant events in the immediate future.