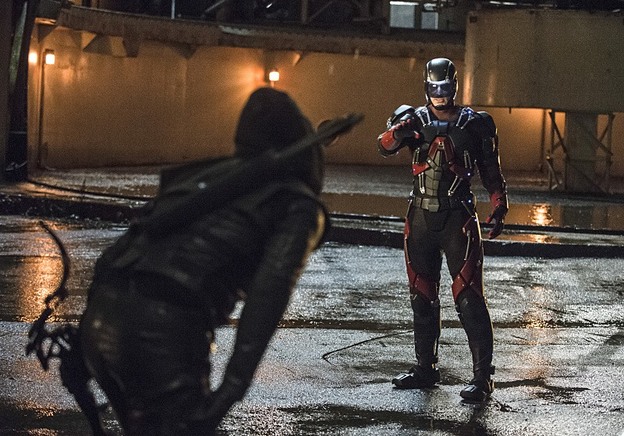 Arrow takes on Iron Man in his Atom armor, Felicity makes her choice while Diggle and Lyla have the worst honeymoon ever in an episode that featured a shocking death — but probably not one you were expecting.

Since they ain’t getting no younger and figured they might as well do this, Diggle and Lyla get (re)married and Team Arrow gets to party. Amanda Waller’s invite must have gotten lost in the mail — stupid post office. 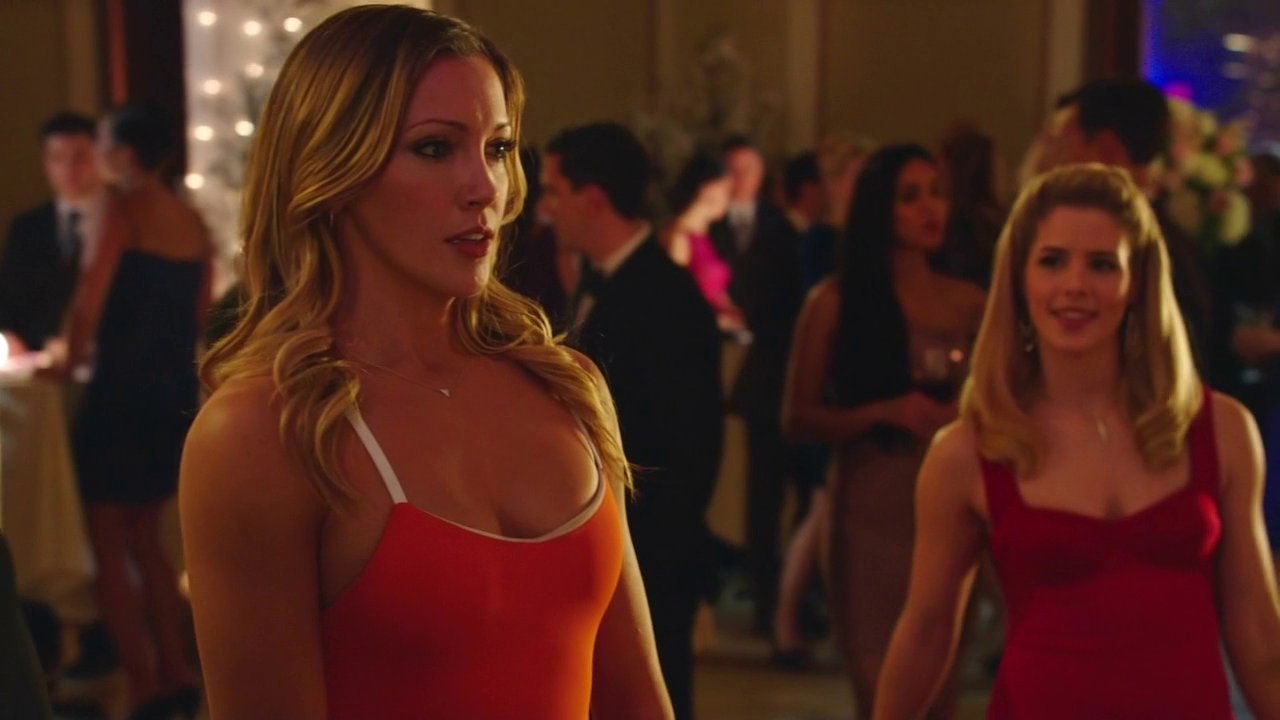 In the midst of the craziest reception to hit Starling City in years, Team Arrow starts getting text alerts about Arrow going back to his old murderous vigilante roots.

As he’s set to be the hero Starling needs, Ray Palmer stands alongside the mayor and Capt. Lance pledging to devote his resources to bringing Arrow  to justice. Atom vs Arrow tonight? Good deal!

Although the newlyweds are game to help, Oliver tells them to get to their honeymoon likely because he knows it’ll lead to the best sleep the new parents will have gotten in months. But before they can snooze their Fiji trip away, they’ve got an unexpected plus 1 in their limo — Deadshot (Michael Rowe) with a new Suicide Squad assignment. 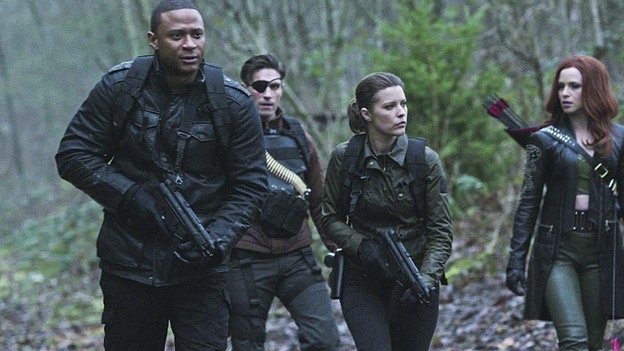 Waller informs them they’ve got to rescue US Senator Joseph Cray, whose being held hostage in the Republic of Kasnia, but the trio has a new team member to welcome to the fold — Cupid. As Deadshot tries to explain to Lyla and Diggle that marriage and parenthood doesn’t mix in their line of work, we get a flashback of pre-assassin Deadshot, just a regular solider Floyd Lawton trying to do his part for his country. He returns from the battlefield to his wife, but their toddler daughter, Zoe, doesn’t know him. Lawton can’t adjust to ‘normal life’ and snaps at his daughter and wife, going as far as to pull a gun on her to explain what he did in the war zone.

The flashback concerned me as the writers are trying to make the guy who killed Diggle’s brother a sympathetic character for some reason. It’s hard to dislike a guy struggling with PTSD.  While in jail, a mysterious woman who identifies herself as a drone in the hive (the DC Comics’ Hierarchy of International Vengeance and Extermination aka H.I.V.E.?) says her group has paid Lawton’s bail and wants him to use his skills as a hired gun. Lawton’s first target? Andy Diggle. What was so important about Andy though? 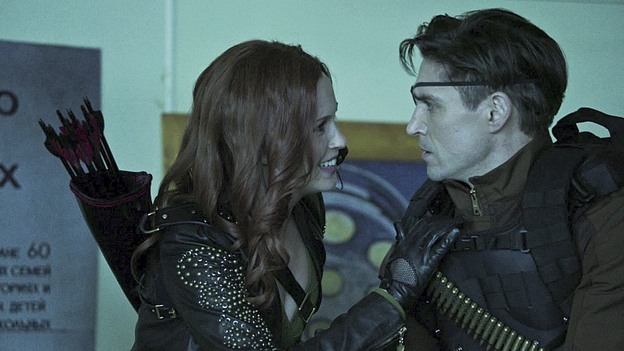 The writers somewhat pack a bit too much tonight considering there were two solid storylines that could have carried their own episodes. If anything, tonight’s outing reinforced the thought that ‘Suicide Squad’ could be another legitimate ‘Arrow’ spin-off. Just as they take out a few of the terrorists, Cray reveals he was the mastermind of the hostage situation figuring it would help boost his presidential campaign. In the ensuing shootout, Deadshot takes a bullet to the arm to save Cupid. Cray can’t have any witnesses that could reveal his plan so he rigs the building with explosives, freaking Lyla out as now she worries that if she and Diggle are killed on the same mission, their daughter Sara will be an orphan. Good time to consider that now…

Deadshot rallies them and ensures them they will get back home to their daughter. This is a strange about face for one of the show’s longtime villains, making me wonder if we’re not longer for Mr. Lawton on the series. Sure enough, Lawton sets up a sniper perch to help Diggle, Lyla and Cupid escape, but makes no effort to flee the rooftop as the explosives go off. Sure did seem like he could have gotten away though. Really wondering if Lawton’s death was mandated by his role in next year’s ‘Suicide Squad’ movie? Clearly lots of people would confuse Rowe for Will Smith’s movie version.  Back home, Diggle and Lyla learn Cray escaped, paid off the other hostages and set up Lawton as the fall guy for his plan. Diggle decides it’s time to leave Team Arrow as he doesn’t want Sara to not know her father. Lyla has her own news as she’s left the Suicide Squad after Waller disavowed knowledge of Lawton. Anyone else getting a bad feeling about Team Diggle making it through this season intact? 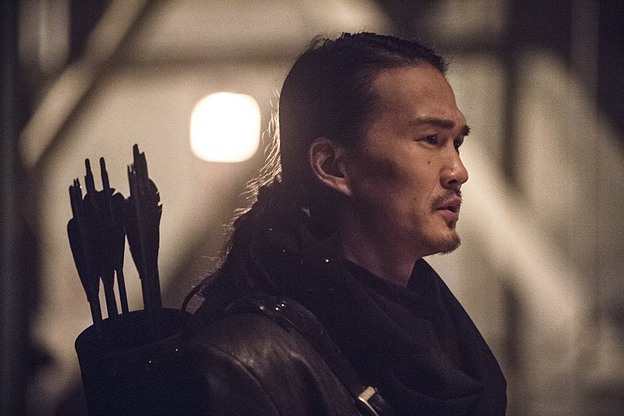 While the Suicide Squad was busy with Cray, Oliver was busy trying to stop the League of Assassins from tarnishing his name. While last week we just saw Ra’s al Ghul dressed as Arrow, it’s now become a league-wide effort to stop the faux Arrows. Maseo surfaces and warns Oliver this will all stop once he takes Ra’s place and the league does that cool smoke bomb trick we saw from ‘Batman Begins.’

Ray is flying around in his Atom suit and spots Arrow. Using his helmet scanners he not only pinpoints Arrow’s location, but also that Oliver Queen is the man under the hood. At Ray’s office, Felicity comes in and he confronts her about Arrow’s identity. Felicity is awesome in just about any situation except lying and Ray is crushed at her betrayal even though he’s now able to make sense of some of Felicity’s curious actions.

Further motivated to stop Arrow, Ray goes to the DA to reveal Arrow’s identity. Unfortunately for him, the DA is Laurel, who scoffs at his suggestion that he learned Arrow’s identity from ‘X-Ray vision.’ Nice Superman reference there. Ray’s smart enough to realize Laurel is part of the team and deduces she’s Black Canary. 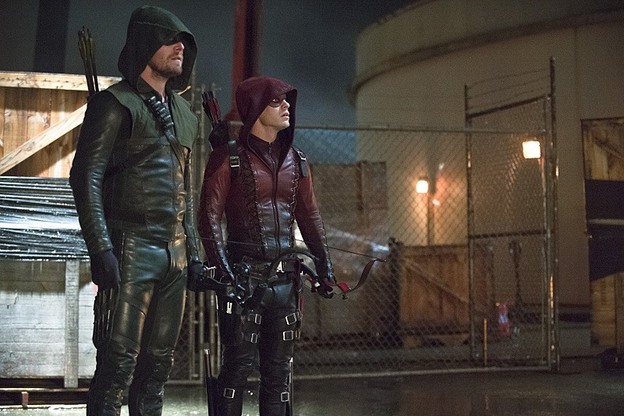 At Verdant, Felicity tells Oliver that Ray knows his alter ego … and that Ray has been working on his own super suit. Roy is impressed at least. Oliver tries to appeal to Ray’s desire to do the right thing and assures him that he is not a killer anymore, but Ray doesn’t trust him or Felicity at this point. Fearing she’s ruined her legitimate shot at happiness with a man who wanted her to be a part of every aspect of his life, Felicity snaps at Oliver that he never wanted her to be with Ray in the first place. Stinging from the accusation, Oliver said Ray was fine for her until he starting trying to save Starling City as he can’t have her and be the hero the city needs.

Before that argument gets resolved, a police report alerts them to gang activity at the Meltzer Power Plant — a reference to Green Arrow writer Brad Meltzer (Green Arrow: Archer’s Quest Deluxe Edition

). Arsenal and Arrow head to the plant, but it was a trap set by Atom. The Atom flying effects look movie quality even if his regular movements reveal the TV budget limitations.

The Atom vs. Arrow battle isn’t nearly as impressive as the ‘Arrow vs. Flash‘ encounter. Atom takes out Arsenal (naturally) with an electric charge, but Arrow knocks out a power pack that way too quickly takes Atom down. Seeing as how this was our first look at Atom in action, this was a disappointing debut. Arrow has Ray at arrow point and tells him he’s not the killer and he needs to trust Felicity. Hero rivalry averted.

Ray and Felicity make good just in time for Ray to explain to the mayor and Lance that Arrow is innocent. Lance is still harboring his down with Arrow vendetta and isn’t so easily swayed and before the mayor can decide her allegiance, she gets an Arrow through the chest … courtesy of Maseo (!) clad in an Arrow costume.  This is definitely not going to help Arrow and Lance get back on the same page. 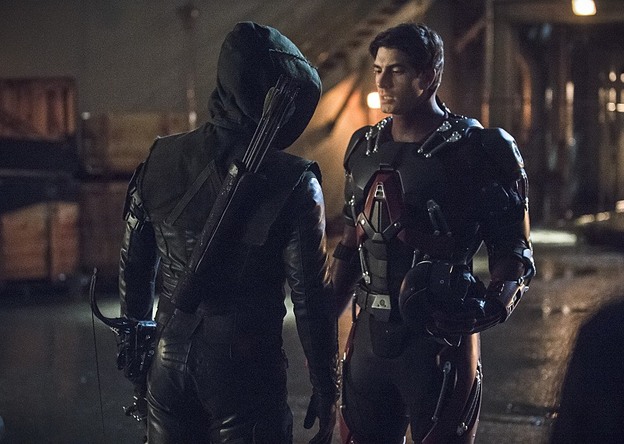 While we probably should have gotten more Arrow vs Atom and Suicide Squad, but you can’t fault the episode for a lack of action. Next week the manhunt for Arrow fully gets underway and things will definitely be interesting for Team Arrow.