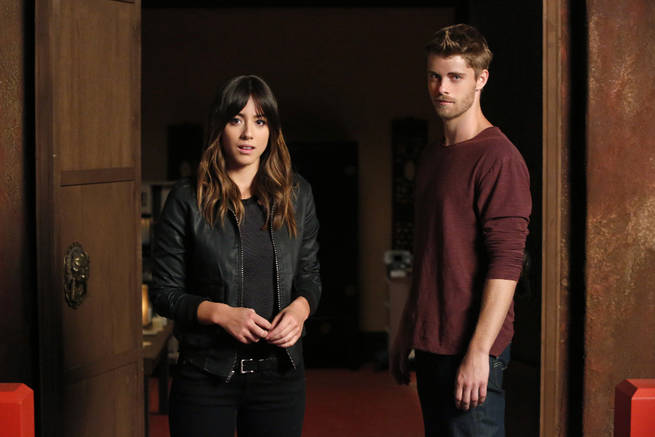 Skye gets to experience life like a Inhuman, an old cast member returns, Coulson and Hunter spend a night over whiskey and SHIELD ver. 2.0 proves they’re far too stupid to be in charge of anything more involved than the cookie jar. Tonight’s episode had a lot happening, but did it all work? Let’s break it down!

Hunter & Coulson on the run with nothing but their marked differences in handling problems is a far better take on ‘The Odd Couple’ than whatever CBS is pushing right now. It’s also provides the episode’s best moments. Coulson and Hunter’s humorous approach in dealing with a used car salesman is pretty funny as is their banter while holed up in the SHIELD safe house.[irp]

With SHIELD and Skye lost, Coulson is running out of options, but figures fighting is better than complaining and trips the alarm to alert SHIELD ver. 2.0 and steal their Quinjet — presuming his backup arrives. 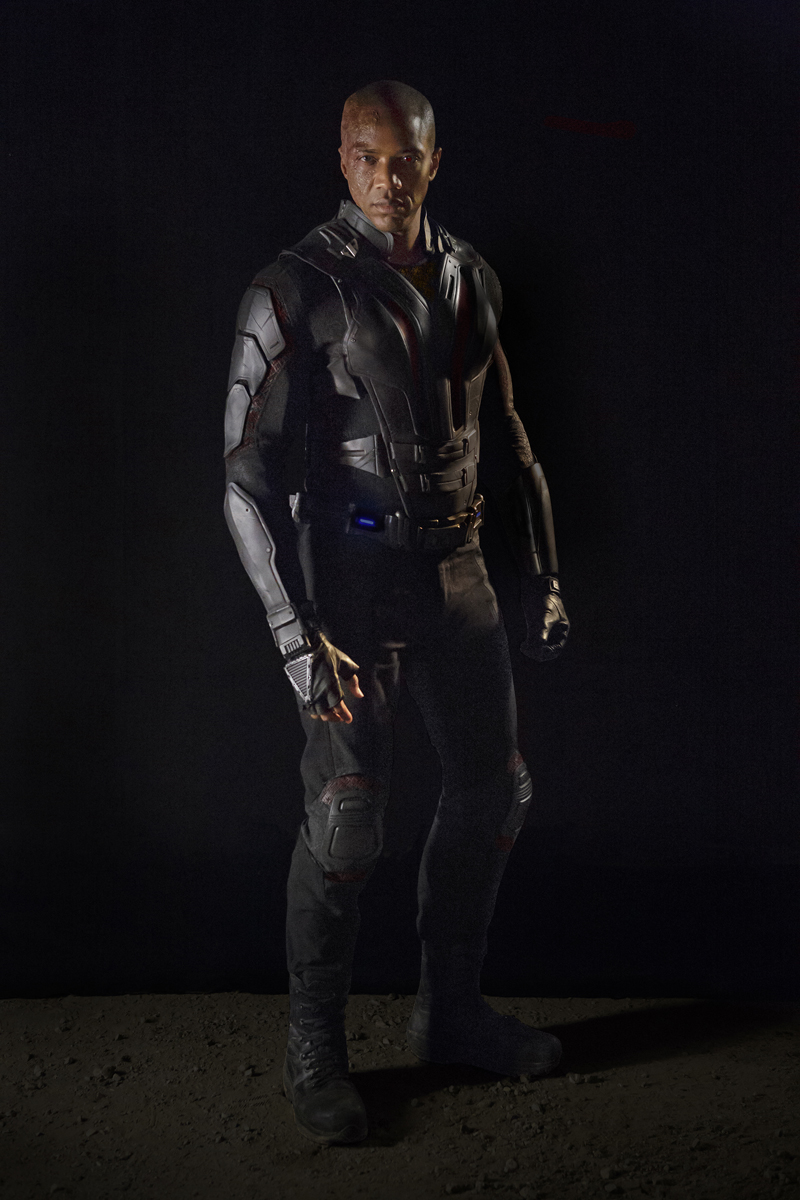 Hunter questions this plan as the SHIELD ver. 2.0 troops surround the cabin — I’m sure it’s easy for costume reuse sake but the show needs to update the SHIELD ver. 2.0 uniform so they don’t look like Hydra soldiers.  Coulson assures him everything is under control as the house was built to withstand the Hulk, but for some reason it can’t handle a SHIELD ver. 2.0 battering ram. Since the backup hasn’t arrived, Coulson uses a page out of the ‘Superman II’ playbook and uses Trip’s Howling Commando grab bag to create a hologram of he and Hunter playing cards so they can knock out the SHIELD ver. 2.0 soldiers.

Then they pay homage to Sam and Frodo as they dress up in SHIELD ver. 2.0 gear and try to waltz into the Quinjet. This plan seemed to make sense, but somehow the soldiers know they’re in disguise. I keep waiting in vain apparently for a shocking appearance by Jeremy Renner’s Hawkeye and figured this would be the perfect opportunity for him to save Coulson and Hunter. It’s the only reason the return of Agent Peterson aka Deathlok — in a slightly better outfit — was a bit of a disappointment. Coulson now has a one man army and general competence so the odds in his fight against SHIELD ver. 2.0 have dramatically shifted in his favor. But to find Skye or SHIELD, Coulson has to turn to the one person he never dreamed he’d need help from again – Grant Ward. Pretty sure super computer cyborg Deathlok could find them just as easily, but we’ll let it slide since this means another appearance from fangirls’ favorite bad boy, Evil Ward. 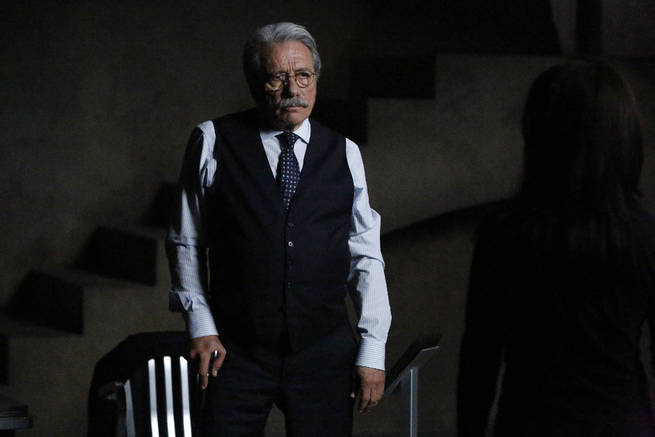 In the other interesting subplot this week, SHIELD ver. 2.0 has a problem. Apparently when Hydra attacked their unit, all of the computer geeks were the first to get killed leaving them at a decided technological disadvantage to anything more complicated than downloading apps. As such, Gonzalez tries to appeal to Fitz and Simmons’ loyalty to SHIELD to help him open Nick Fury’s toolkit. If they’re not interested, they’re free to go. That’s a spectacularly awful sales pitch. Bobbi gives it another try with Simmons and her sincere desire to help Skye get control of her powers convinces Simmons to stay on and help open the toolkit.

Mack breaks the news to Fitz to try and get him to stay and shows him Simmons’ handiwork so far, which leads to Fitz confronting Simmons and other SHIELD v.2 members and saying they’re all just afraid of the toolkit and people like Skye. Question: exactly when did the writers decide nervy, spazzy and interesting Fitz was no longer convenient and switched him back to normal? Simmons tells Fitz if he won’t go along with SHIELD v.2’s objective maybe he should leave. The writers make this payoff a bit too obvious though and sure enough, Fitz leaves out with the real toolkit and a sandwich and a note from Simmons telling him to be careful. 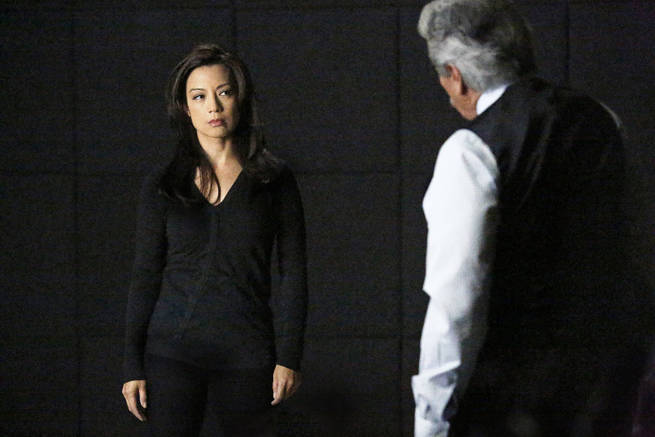 Good for Fitz/Simmons, who apparently have smoothed out all their season-long differences in between episodes, but how bad does this make SHIELD v.2 and Bobbi in particular? This isn’t the second time in as many weeks that Simmons outsmarted her and she remains completely oblivious. I get that SHIELD v.2 aren’t the ‘heroes’ and have to make bonehead moves, but they are consistently made to look like goofs first in letting Hunter escape their custody, not having enough guards on Coulson allowing May to help him escape and now getting fooled by some Fitz/Simmons sleight of hand.

Gonzalez asks May to join the SHIELD v.2 board, which will help determine Coulson’s fate when they bring him in. Good luck with that. May appreciates his straight-forward approach and agrees to help bring Coulson in, but knowing this show, May is clearly lying and just saying she’ll catch Coulson to get away. 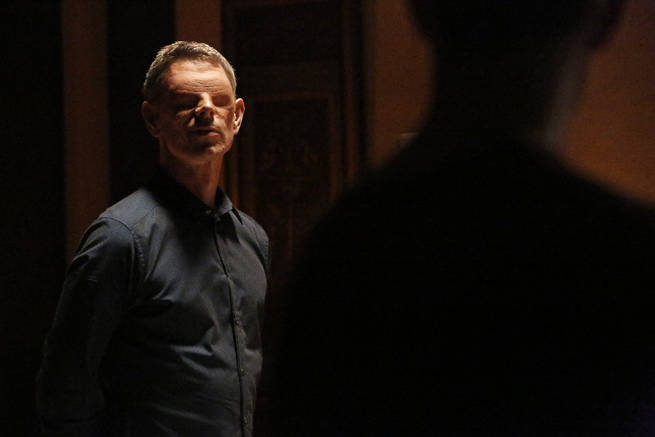 And now time for the star of our show in the weakest of the three subplots. Among the 732 issues with ‘X-Men: The Last Stand’ was Rogue whining about not wanting her powers. Skye is our reluctant hero in the mutie-less Marvel Cinematic Universe and is full of questions. She awakens on a mysterious island mountain with only Lincoln (Luke Mitchell) — a blonder, blander version of Evil Ward — to give her the nickel tour of the Inhumans mountaintop retreat. Lincoln reveals Skye’s powers are irreversible and she essentially cut the line of other humans awaiting their exposure to the mists to get her powers. Lincoln has some nifty static electric powers that allow him to levitate Skye and presumably make quick work of ironing.

Sadly the mountain is only populated with pretty people just like pre-Grant Morrison X-Men. This hideaway needs more freaks like Raina, who thankfully is hanging here wallowing in self-pity over her less than model look. Spikes protruding from your face? That’s a real problem, but Skye doesn’t have any sympathy. Apparently Skye has mastered enough control of her powers to focus an attack on Raina and seems willing to kill her when Jiaying (Dichen Lachman) see also Skye’s momma, comes to Raina’s aid and offers to help Skye control her powers.

Jiaying goes to Cal’s more or less prison room and says he did as he promised in getting Skye here. But how is Jiaying still alive and does that mean Whitehall also isn’t dead since he has her blood/cells?

SHIELD JV’s ineptness really hurt what was shaping up to be a strong rival for Coulson’s team, but we did get some fun Hunter/Coulson scenes. A little less Inhumans teasing would be helpful though as the show doesn’t need to veer too far into super-powered characters that it ignores the initial concept of the show — regular humans dealing with a quickly evolving world. There’s six more episodes to go so hopefully we’ll get a better indication of the future direction and an unpredictable finale.