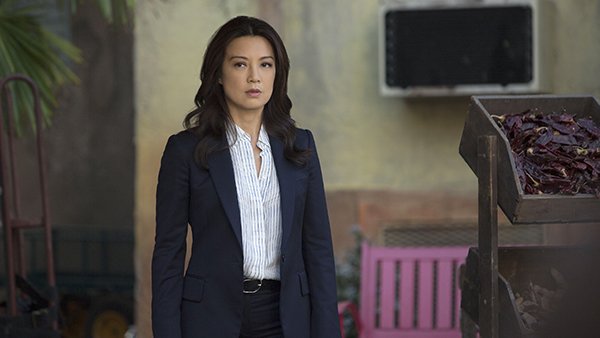 Agents of SHIELD is at an interesting crossroads as it’s having a bit of an identity crisis.

Is it the spy serial it started off as or it content to be an extended ‘Inhumans’ prologue? The former is preferable, even as AOS seems determined to just  be another about superhero adventure with reluctant characters unsure if they want the powers and responsibility of saving a world that fears and hates them. On the plus side, at least the spy and Inhuman subplots converged somewhat this week.

AOS has relied more heavily on flashbacks this season, but rarely as effective as tonight’s episode where we learn how May earned the nickname ‘The Calvary.’ But frustratingly, this long-anticipated character spotlight has to split time with the one character who hardly needs more screen time. You only get one guess. 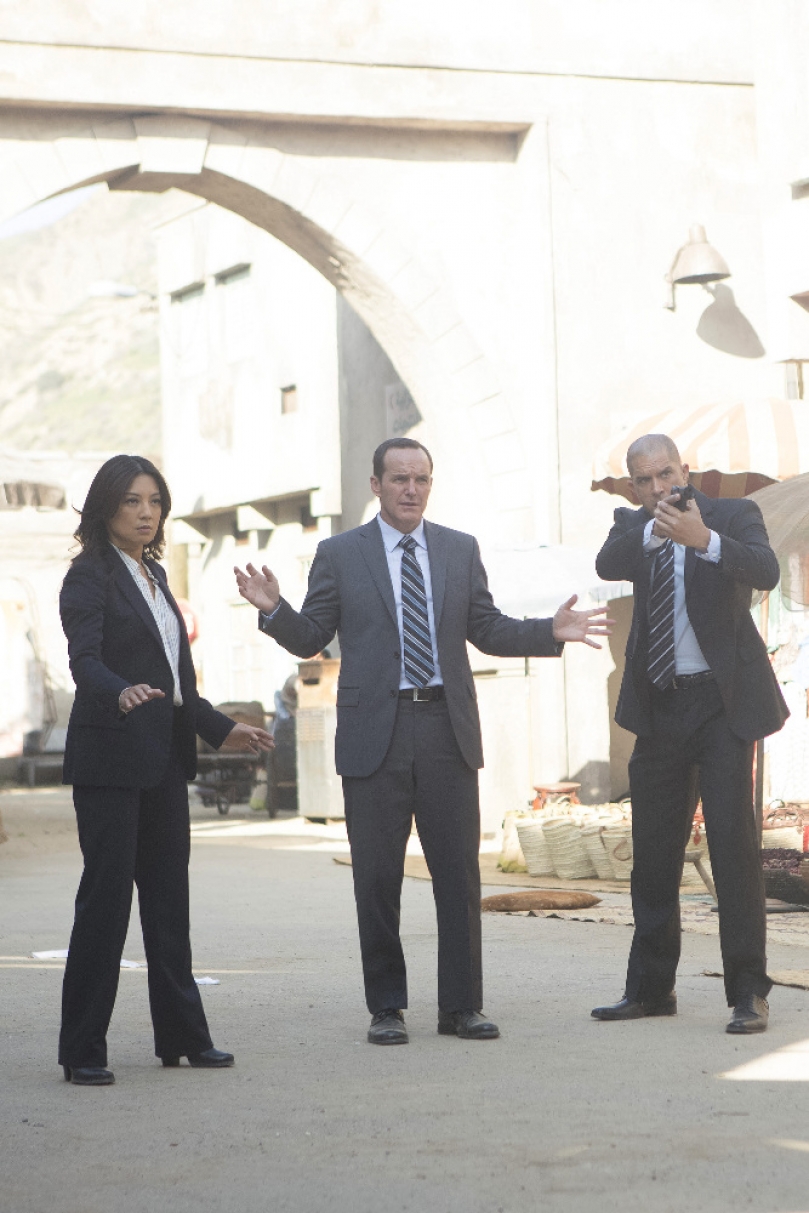 Seven years ago we see a preppy, perky May (almost Skye-like) enjoying a little shower time with her husband Andre (Blair Underwood) and even talking about having a baby running around.

Coulson drops by with a new mission of bringing in a super powered woman. While en route, the two discuss SHIELD’s future — May with her thoughts on the Triskelion while Coulson is excited about Fury’s Earth’s Mightiest program aka The Avengers initiative.

Meanwhile, Jiaying and Skye are starting Skye’s Inhuman training as Jiaying has Skye try to use her vibrational control on the mountain. I was disappointed at Skye failing to say ‘I can’t. It’s too big. You ask the impossible,’ but she does create a nifty avalanche before dumping on this stranger her constant sense of abandonment.

This led to perhaps too quick moment someone out there’s been waiting on as Jiaying reveals that she is her mother. I only slightly kid about the Star Wars connection, but Skye sure is filling in a lot of the check marks of Luke Skywalker. First mentor gets killed (check although Coulson technically came back to life before he met Skye…), fighting crazy father (check), long presumed parent reveals themselves (check), teams with a scoundrel (check though Han isn’t nearly as psychotic as Ward) and makes fast friends with two robotic characters (although at times C3-PO and R2D2 act more human than Fitz/Simmons). I’m half expecting at this point for the revelation that Raina is her twin sister.

Raina is whining to Gordon about how Skye gets everything. She mentions to Lincoln she’s having dreams of Skye eating dinner with her father while she’s stuck looking like a freak. Have to agree with Raina since Gordon is the only other Inhuman who looks remotely abnormal. It’s the most frustrating aspect of this Inhumans storyline. The show wants to devote so much to them without fully committing to doing the characters any justice. Are we supposed to feel some sympathy for Raina because she was a conniving schemer for a season and a half and her disfigurement seems an appropriate fate. 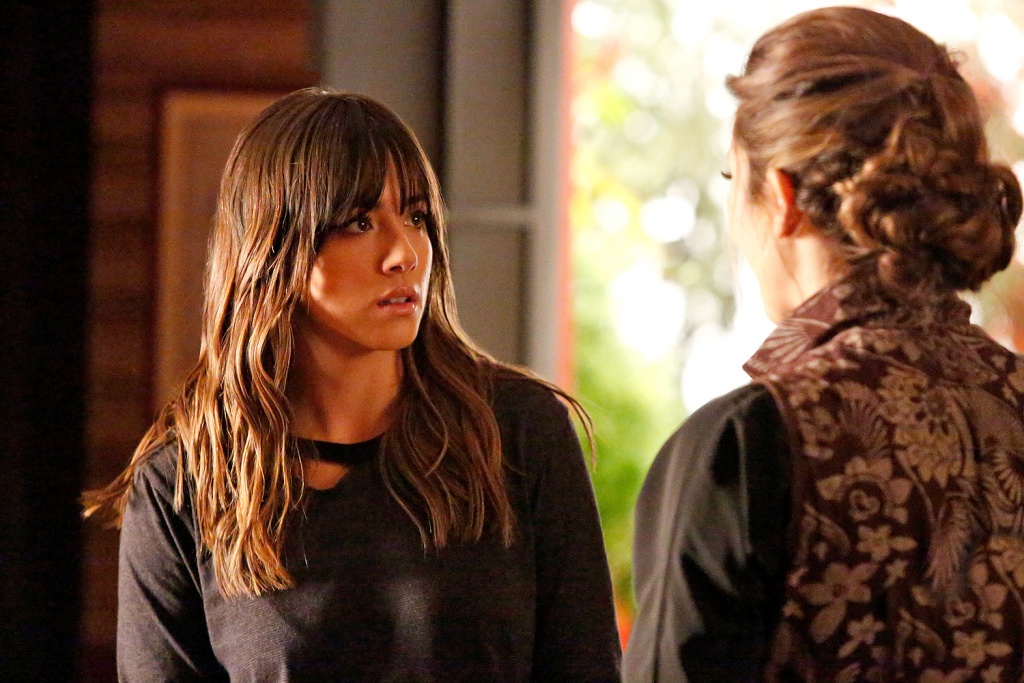 Jiaying explains to Skye that Cal lost himself after putting her back together [why didn’t Sky question what she meant by that?] and trying to find Skye. Then Jiaying goes into the dangers of someone becoming exposed to the Terrigan Mists without being ready.

This brings us back to the flashback where Coulson and May are trying to rescue a kidnapped girl and a SHIELD unit (the original ‘Calvary’) from an apparent ambush by the super powered Eva, another Inhuman. May goes in alone to rescue the SHIELD squad while Coulson deals with Bahrain officials. She quickly takes down the enemy forces and after another brutal woman vs woman battle (the show’s surprising specialty), May kills Eva.

Only problem was Eva wasn’t the real threat, but the girl — Eva’s daughter. Eva wanted her daughter to get exposed to the mist but when the Inhumans refused, she stole a crystal and powered her daughter herself. The process drove the girl insane and she could mind control or kill with just a touch. Short of options as the girl advances to the spellbound SHIELD squad, May makes the heart-wrenching decision to kill the girl. 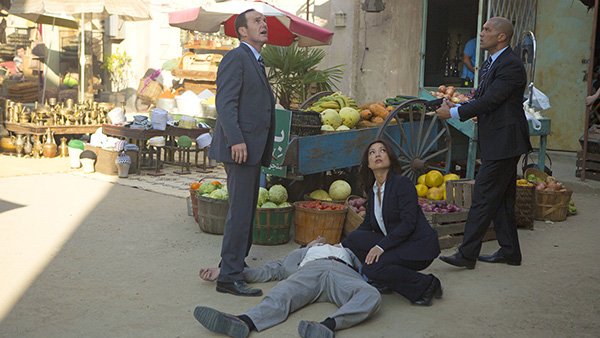 Melinda May is effectively dead and as her SHIELD members wake up and see the bodies strewn along the ground, they dub her ‘The Calvary.’ The psychological damage forces May to shut off emotionally from everyone including Andrew.

Jiaying says the girl and Eva were her responsibility and any perception of favoritism would be dangerous so no one can know of her connection to Skye. For now, it’s time for dinner with Cal, who after Jiaying’s revelation is an actual sympathetic character who went crazy trying to do right by his family. Lincoln walks in and realizes Raina’s vision and smiles knowing she can see the future.

Present day, May keeps her poker face, but is visibly surprised to learn that Coulson was working with Deathlok. Worse, she learns Coulson had another secret mission — The Theta Project — in the works where he was establishing a splinter group of powered individuals ala a Super SHIELD and consulting with Andrew. This new information may have actually brought May and Simmons on board with SHIELD ver. 2.0. 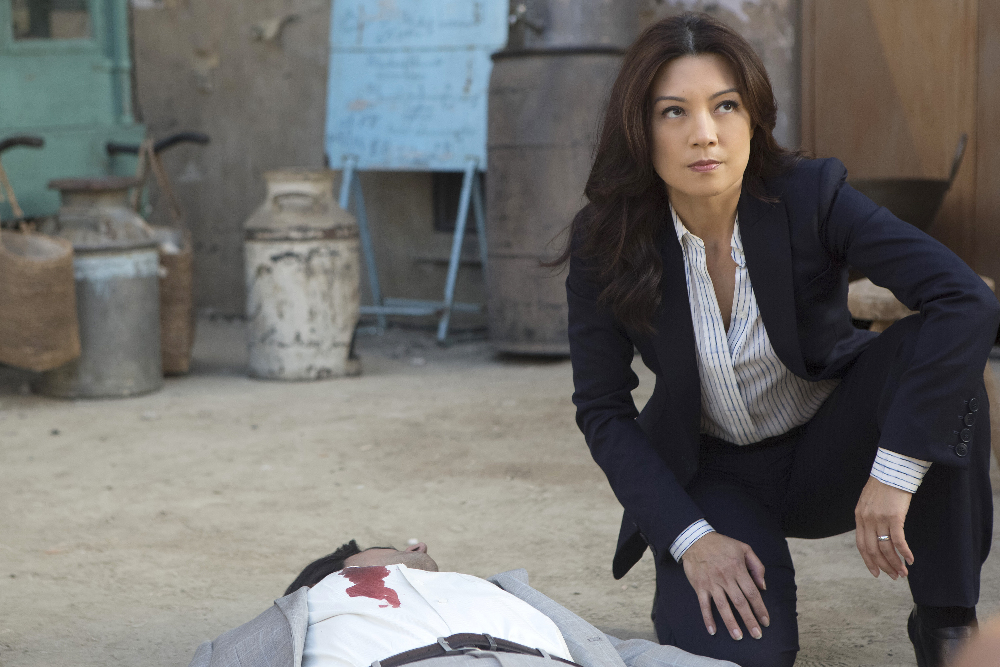 Turns out they weren’t completely stupid as Bobbi assigned some men to tail Fitz after he left. Somehow, he’s able to open Fury’s toolbox in the biggest diner rest room in the history of TV. There he connects with Coulson and Hunter asking for their assistance in losing his tail and getting to them.

May’s connection to The Inhumans helped make this episode, but the Skye/Raina drama is a drag on the larger story specifically Coulson’s end game and how that conflicts with SHIELD. Next week’s teaser hints of some connections to Avengers: Age of Ultron, but a safer bet will be some dramatic fallout from the movie events impacting Coulson and company going forward.