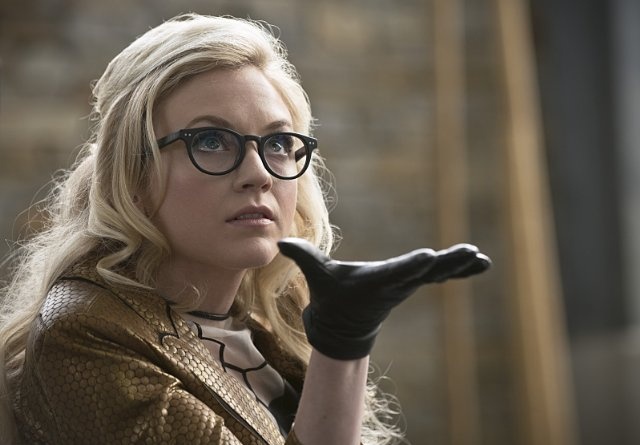 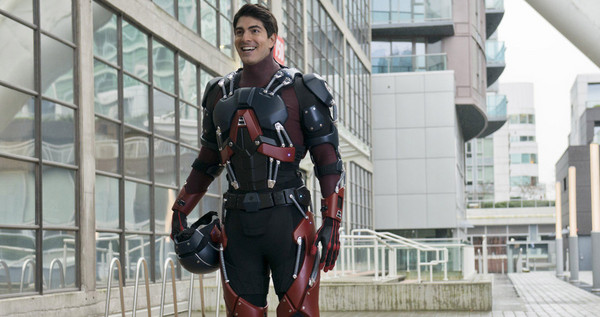 No, not the Wu-Tang Clan, but we do get one exciting crossover. Tonight’s episode felt like the last bit of lighthearted fun for our favorite speedster and his pals before what will assuredly be an emotional final string as we’re approaching the home stretch of the season. In a cute display of Crime-fighting 101, Prof. Flash teaches us how easy it is to stop low-level crooks and flashers (not the speedster variation) and toss them in Joe and Eddie’s police cars. But since they can’t be everywhere, they can’t save Lindsey Kang, a professor specializing in micro biology from a swarm of bees. We’ve seen a lot of creepy stuff this comic book TV season, but bees coming out of a person’s mouth definitely ranks near the top. 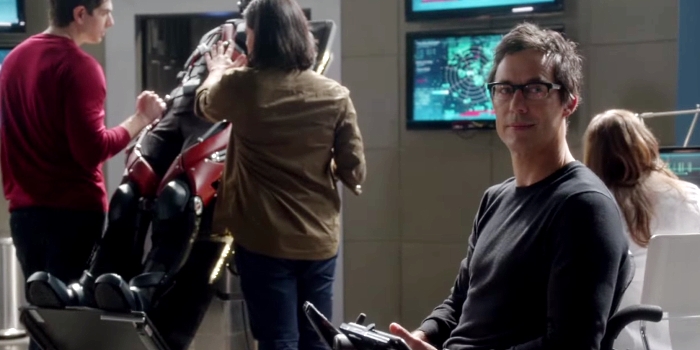 Money, money, money, who do you trust? Barry is feeling like a terrible super friend for not bringing Cisco and Caitlin into the fold about his suspicions about Wells, but Joe wants to make sure they’re on the real Team Flash. As opposed to Wells’ Team Flash so I can get back home version. Jetting to STAR Labs, Barry goes over the case with the rest of Team Flash, but before they get too far, they get a surprise pop-in guest — Felicity has taken the ride to Central City and she’s not alone! While last time she was hanging with Arrow, Felicity has a new issue for Team Flash — helping Ray fix his ATOM suit. In a cute nod to Brandon Routh’s other superheroic role, Caitlin and Cisco do the obligatory ‘It’s a bird,’ ‘It’s a plane’ routine. While having some girl talk with Caitlin, Felicity happily describes Ray as “like dating Barry in Oliver’s body.” 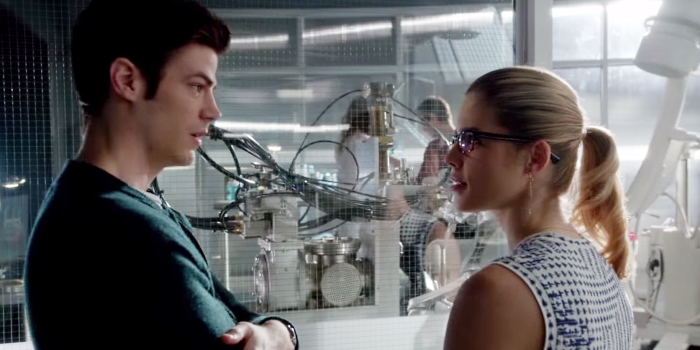 Cisco is not terribly impressed with the Atom name, but Iron Man’s already taken so…. Ray trying to work on some kinks with his armored suit and Cisco is keen on helping especially since he hates bees. As they work on the suit, Ray says “You’re really quite clever Cisco,” triggering a recurring nightmare of Cisco’s where Wells reveals himself as The Reverse Flash and kills him. But that was only a dream…or was it? Iris has irritated a lot of viewers for being the clueless love interest and she won’t do any favors this week as she gets all up in poor Eddie’s case for hiding something and not sharing every detail of his life with her. Of course, Iris doesn’t mention any of her rendezvous with the Flash, but don’t get sidetracked, we’re talking about Eddie! You’ve gotta feel for Eddie as he’s the only guy in Central City who didn’t care about the Flash’s identity and now has to keep it secret to keep Iris safe or something. And now it’s threatening to ruin his relationship. I’m perfectly cool with Eddie staying with Iris as Caitlin makes a more interesting love interest for Barry, but would even the fans hoping for Iris and Barry to get together actually be upset with Eddie for revealing Barry’s identity? 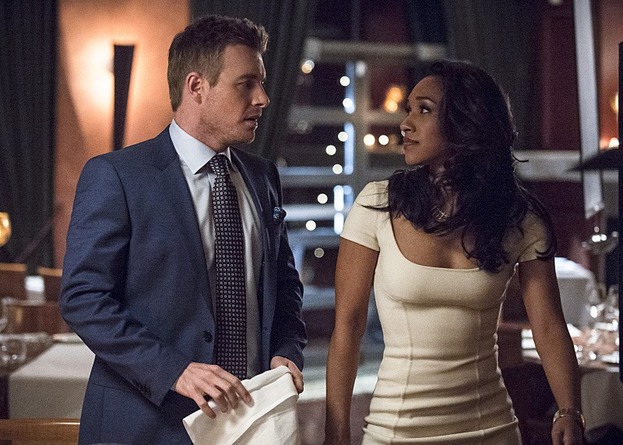 It’s why I’m rooting for Ray and Felicity. He’s been completely forthcoming and transparent and it’s about time someone who is honest with his love interest gets the girl. Eddie tries to get some advice from Barry as he’s at CC Jitters with Felicity, but as he tries to hint around Barry’s identity, Barry says she knows. In the line of the night Eddie says “Wow, so everyone but Iris then?” Yep, seems like it. Team Flash is on to another bee swarm victim, but Barry once again arrives too late to make the save even though the bees now target him. It was a bit surprising Flash didn’t just use his new vibration trick he learned just last week to avoid contact with them. Instead, the bees sting him and give him a heart attack. Luckily Team Flash was on top of things and installed a defibrillator in the suit for just such emergencies. But Cisco’s acknowledgment that he should have updated the suit prompts Barry to wonder if he can trust any of them. 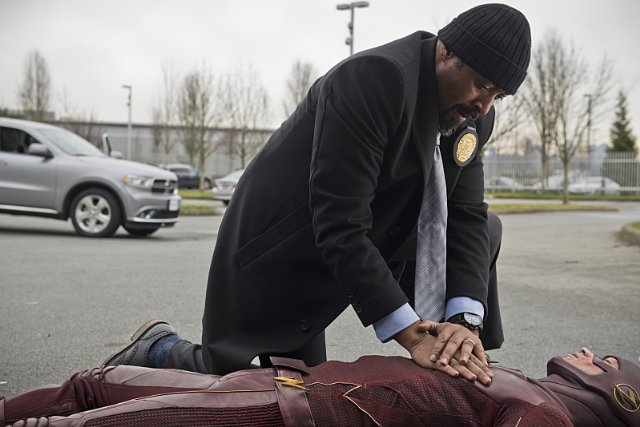 Fortunately, Felicity is here to talk some sense into him and vouch for Cisco and Caitlin’s loyalty even if Wells turned out to be a mother-killing murderer. Cisco noticed the tension and asks Joe why Barry is acting so strangely when he gets another flashback of Wells outing himself as The Reverse Flash. 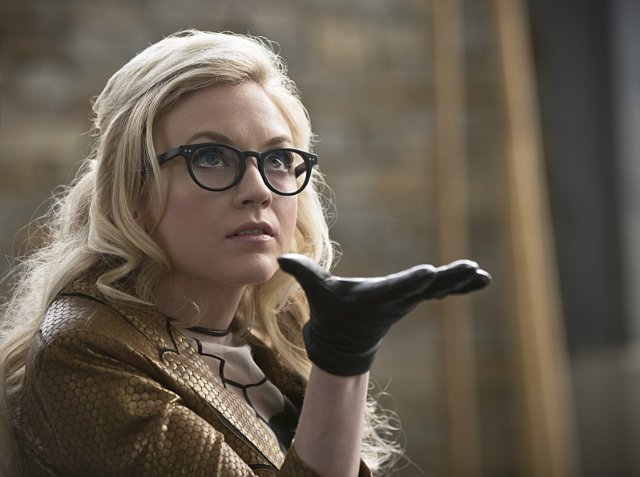 Thanks to a stray bee stuck in Flash’s suit, Team Flash is able to capture it and learn it’s a miniature robotic creation of Brie Larvan (Emily Kinney, ‘The Walking Dead’) , whom Ray and Cisco excitedly dub The Bug-Eyed Bandit thanks to the bee’s 360-degree vision system.

Bug-Eyed Bandit was a Silver-Age Atom villain in the comics so this was an appropriate villain. Brie wanted to sell her miniature tech to the military, but her boss Tina McGhee (Amanda Pays returning from her earlier appearance in Ep. 9) fired her and now Brie wants revenge. Barry goes after Brie while Ray takes to the skies to save Tina from a swarm attack and Felicity tries to hack Brie’s computer. “She’s like my nemesis. I kinda like it!” Can we just put Felicity on every CW hero show? Iron Man comparisons aside, the Atom effects remain at movie-level so he looks good while in action. After Felicity finishes her hack, Barry quickly takes out Brie while Atom loses the swarm in a lake. Tina drops by Barry’s lab and says Wells seemed like an entirely different person 15 years ago when his wife Tess died, which seems to strike a chord with Barry. With Wells all but assuredly removed from Team Flash by the end of the season, perhaps Tina could fill the older mentor role? Before heading out of town, Ray tells Barry he thinks the solution to solving his armor’s problem is to go smaller. Oh, don’t tease us with an actual size-changing Atom! 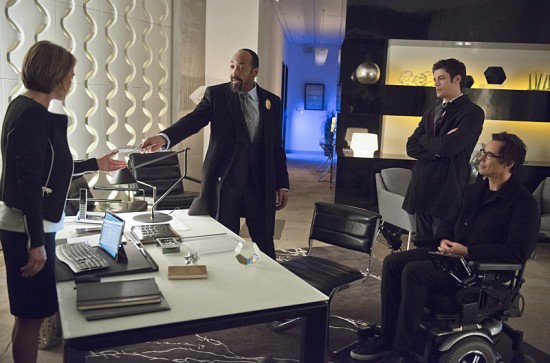 Cisco and Caitlin drop by Barry’s lab for a night of karaoke, but Barry and Joe reveal their suspicions about Wells. As Caitlin protests, Cisco tells them about what he thought were nightmares and that Wells killed him. Bee puns and joking aside, this episode was an enjoyable last round of fun for ‘The Flash’ as we know it as the season goes to a much darker direction as Barry prepares for his confrontation with Wells.