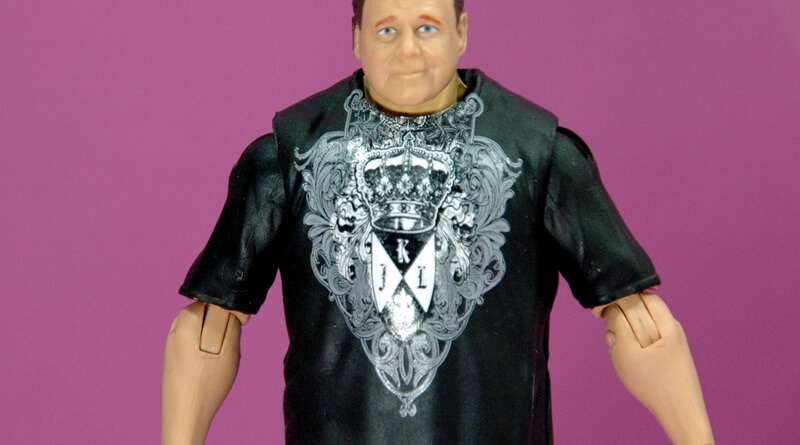 Jerry ‘The King’ Lawler has been a fixture of WWE since 1993 so it’s no surprise he’s been a constant in WWE figure lines. Jakks gave collectors multiple incarnations of the Memphis royalty, but this marks just the second version from Mattel. While their first take was a slightly more modern than desired flashback, there’s no mistaking the latest version as a contemporary commentator take of Lawler. Does this one shine like royalty? Let’s find out!

Packaging: The Basic packaging is some of the best of the bare-boned options. You can easily identify the character thanks to a nice portrait and the character on the left side making it easy to find on the pegs. The blue and yellow orange color scheme is attractive and eye-catching.  On the back is a wider version of the portrait. I’d like to see a different picture like Mattel uses for the Elite line, but it’s likely not a big deal for the non-MOC collectors.

Likeness: This is definitely a 2015 era Jerry Lawler although from certain angles the head sculpt could just as easily be considered Jim Ross sans cowboy hat. Typically, I prefer neutral expressions for the wrestlers, but in Lawler’s case, I would have been fine with a smile like the portrait. Lawler is wearing one of his trademark Ed Hardy-esque shirts and despite being a Basic figure, the details aren’t skimped out on, which is appreciated.

I’m not the biggest fan of Mattel’s rubber overlay for figure T-shirts as they always add too much bulk. While a cloth shirt is asking for way too much in a Basic figure, Mattel does have a series of T-shirt torso mold figures that looks much better. Since we rarely see Lawler out from under the commentator table, I’ve no idea if he’s still wearing his tights and boots to the ring like the figure though.

Paint: Unlike the Elite 18 version, this Lawler isn’t painted cross-eyed. Mattel uses the rubber T-shirts to more accurately reproduce some attires and this is fittingly smooth and accurate with no scuffs or mishaps with the tampo applications on both the front and back. The tights and boots also have clean apps. While the color combinations might be a bit boring, what is here is very well done.

Scale: You don’t really need a character who for the most part will be sitting behind a table in your display to be perfectly accurate scale-wise, but it doesn’t hurt. Oddly though, the figure is noticeably shorter than the Elite 18 Flashback. While it makes sense for a wrestler to lose some mass and maybe a couple of inches of height, this is a bit drastic.

Accessories: Basics don’t come with anything so you can’t knock the figure for coming bare-boned. Still, for a commentator and non-wrestler, it would have been nice to get at least a microphone, headset or a dare I dream, a crown for the king.

Articulation: Here’s where the lack of Elite articulation shouldn’t hurt. After all, Lawler just needs to sit at the commentator table and raise his hands in astonishment after someone goes through the Spanish announce table. But have you ever bought a figure for one purpose and it can’t do that properly? 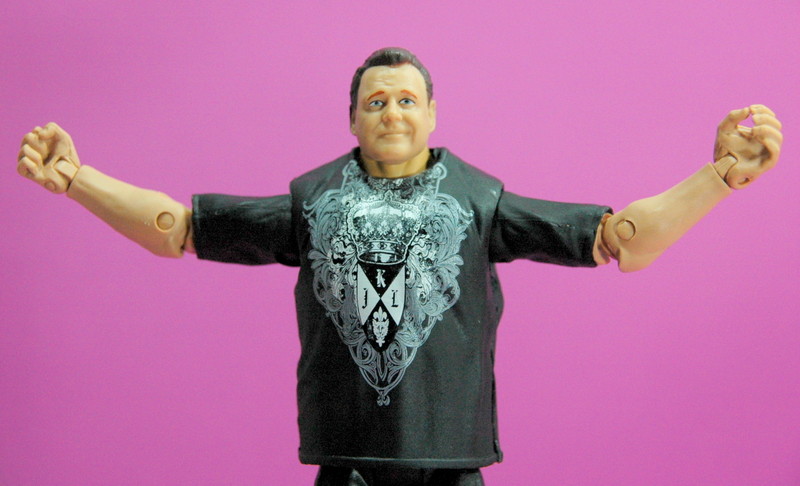 That’s kinda the case here as the Basic articulation scheme doesn’t fully allow Lawler to fit squarely in the chairs.

You can either opt for a reclining look or a resting on the edge of the seat, but you won’t be able to get Lawler looking like he’s fully comfortable at the commentary table. With the T-shirt sleeve mold, Lawler’s elbow joint looks a bit unusual when you move it, but it’s fully functional and won’t impair any movement. Ditto for the rubber overlay T-shirt.

Worth buying? It’s ‘The King!’ If you want a bit more authentic look to your ringside figure display, he’s a must even with the wonky articulation. The $10 price tag makes what is a glorified display piece a decent deal. Typically Mattel has used a build a figure format for non-wrestling characters like Booker T, Jim Ross, Michael Cole and Corporate Kane so this avoids all the headache of adding yet another Randy Orton or John Cena to your collection for a torso or leg piece.

Where you can get it: I picked mine up at Target, but Basic 46 is available at all retail stores like Wal-Mart and Toys R Us as well as Amazon. [get it here: WWE Figure Series #46 – #11, Jerry Lawler