We’ve got four more episodes to go, but I’m calling it now. ‘Speak of the Devil’ will be the best of the season. Sure, there’s the obligatory geek-out moment of Matt Murdock actually calling himself Daredevil and wearing his more traditional red outfit, but the remaining four will have really bring it to top the most compelling and tone-perfect outing of Daredevil yet.

The quickest way to get Daredevil fans’ attention? Kick off the episode with Daredevil getting his backside handed to him by a Hand ninja. With the ‘now that we’ve gotten your attention’ opening out of the way, Director Nelson McCormick lets the episode breathe and gradually take us back to this highly-anticipated clash. 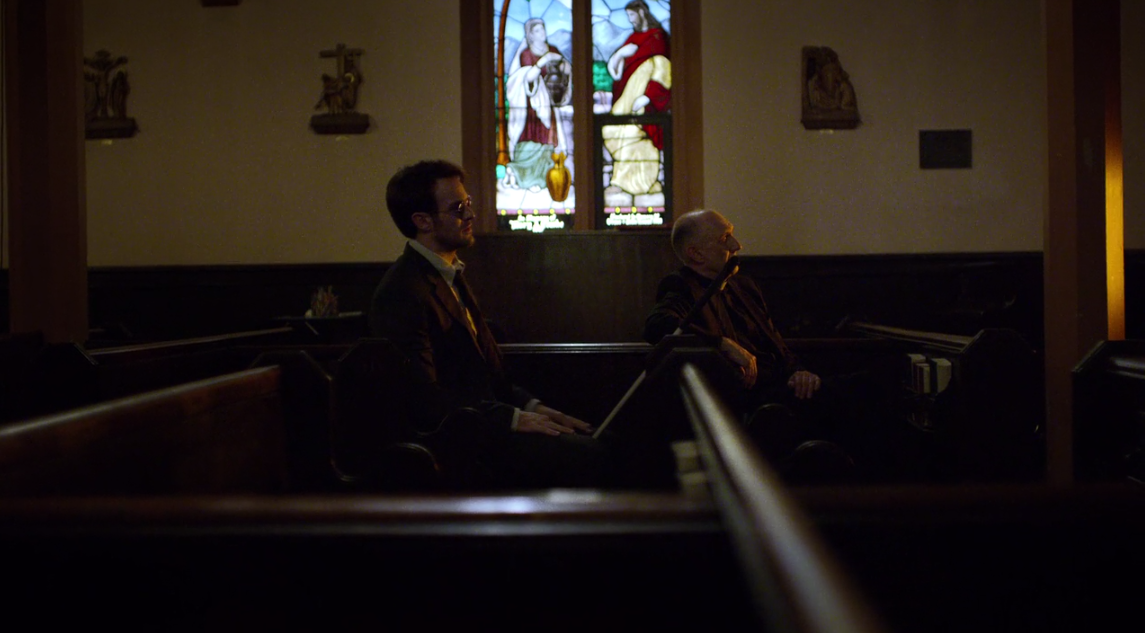 One of the core elements that helps Matt Murdock stand apart from most of his comic book peers is his Catholic faith so it was fitting that the show made that a major focal point of the episode. Matt once again visits with Father Lantom (Peter McRobbie) seeking clarity on his crisis of faith. Matt knows his soul is damned if he kills Wilson Fisk, but saving Hell’s Kitchen and its inhabitants may be worth the price.

He doesn’t get much help after chatting with Foggy, Karen and Urich about Fisk’s connections to the crime in Hell’s Kitchen as anyone remotely connected with him has gone missing. Foggy still is very leery of Daredevil, but on the plus side, Karen reveals an official office sign for the front door. 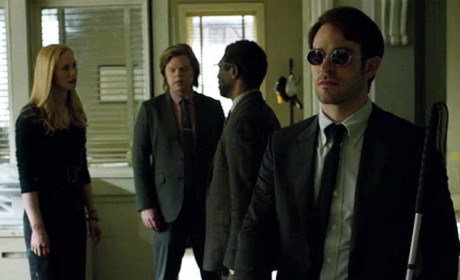 Matt hopes to gain some insight from meeting Vanessa, but his scouting mission goes sideways as Fisk himself is there as we get the first face to face confrontation between the two rivals. I’m digging how slow burn this has been as their first meeting was over walky talkies and now they’re meeting in their ‘alter-egos.’  Meeting Vanessa complicates matters for Matt though as he now knows Fisk loves someone who also loves him. Lantom suggests Matt can take Fisk down without killing him, a position Matt seems to consider as a new and potential option.

Pity then that Fisk doesn’t share Matt’s desire for a more peaceful resolution. As his ally Nobu (Peter Shinkoda) is pestering him about the apartment complex Nobu’s associates have heir eyes on, Fisk promises to handle the situation provided Nobu can get a specialist from his organization to deal with the man in the black mask. 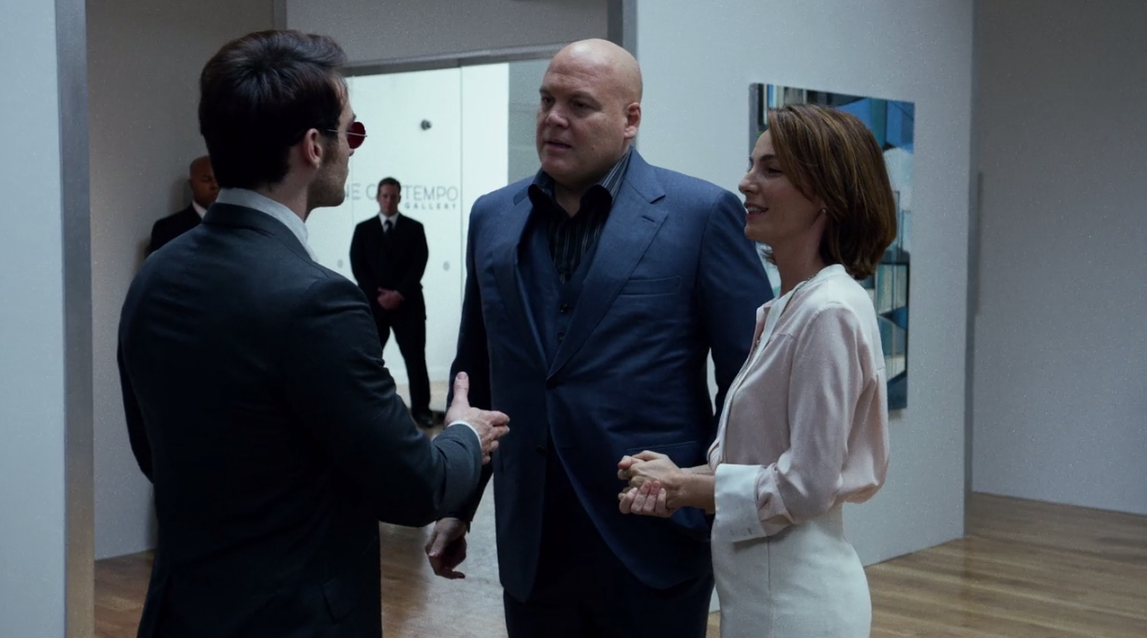 Fisk’s solution shows Matt the true measure of his reach as Foggy, Karen and Matt learn their former client Elena (Judith Delgado) has been stabbed to death. The investigating police officers say it was a robbery gone bad in a terrible neighborhood, but Foggy and Karen know it was because Elena took their suggestion to rally her fellow apartment dwellers to not cave in to Fisk’s buy-out requests. I appreciated the payoff to this subplot as it makes Karen and Foggy’s stake in seeing Fisk get taken out even more personal and Henson and Woll do a tremendous job conveying their grief over Elana’s murder.

Charlie Cox has so perfectly inhabited the grittier comic book version of Daredevil, but his steely stoic nature as Matt Murdock is really driving the series. I’d be curious to see if the writers keep him in rigid, straight-laced attorney mode or if they’ll let Matt lighten up some. Daredevil can be a very serious character, but the more recent throwback comic stories where he’s a quick-witted attorney seems like it would almost fit in better with the rest of the Marvel Cinematic Universe. Serious Daredevil is fine for an origin season, but hopefully the writers will explore other portrayals of Matt in future installments. 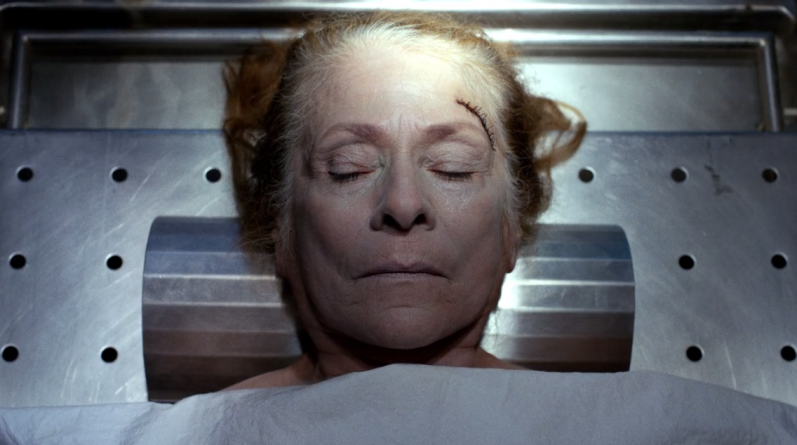 Elana’s death prompts Matt to start a manhunt through Hell’s Kitchen for her killer, a drug dealer seeking money for a score. After tearing through several thugs, Daredevil finds him and beats him down enough that he gives up the location of the man who hired him. Daredevil heads to the abandoned warehouse and is greeted by Nobu, clad in the red ninja suit all but confirming his involvement with The Hand ninja clan, a perennial thorn in Daredevil’s side in the comics.

As he battles Daredevil it’s quickly evident why Fisk tolerated his outburst as Nobu is a deadly fighter, slicing and dicing Daredevil with his edged weapons. Daredevil is hanging in there, but Nobu is kicking his tail to the point I questioned if Daredevil hadn’t been on the receiving end of too many beatings this season. Unlike the other heroes, Daredevil can’t really do more than what he’s been doing in these fights.

Nobu prepares for the finishing touches on Daredevil, but his flailing away with his weapon punctured a can of flammable liquid. Daredevil as enough energy left to use his sticks (from Stick) to spark a light and create Ninja Flambe. Fisk, along with Wesley and another bodyguard, emerges and thanks Daredevil for dealing with Nobu although he was hoping they’d both kill each other. Daredevil thinks he’s got enough left to take down Fisk, but soon realizes that Fisk doesn’t need any help to beat him. Already weakened from his battle with Nobu, Daredevil proves no match for Fisk, who short of cracking his back over his knee, completely Bane’s him. Dismissively leaving him for Wesley to shoot, Fisk walks off allowing Daredevil the briefest of moments to toss his stick at Wesley and crashing through a window into the river below. 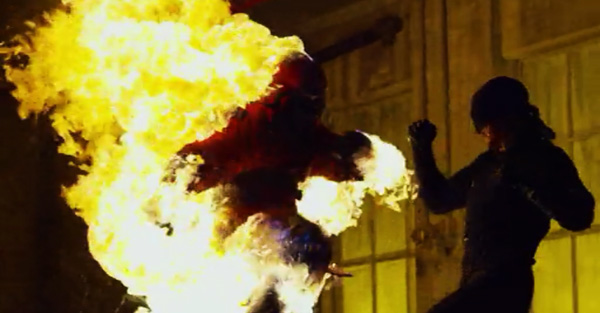 In apparently his typical routine after getting sloppy drunk, Foggy knocks on Matt’s door telling him they won’t let Fisk win and they’re going to bring him down when he hears a loud crash inside. Barreling in Foggy sees the man in the black mask bleeding and stumbling toward him before passing out. Foggy starts to call the police, but he already knows who’s under the black mask and slowly raises it to see his best friend Matt Murdock.

Each episode is 60 minutes, but ‘Speak of the Devil’ felt much longer in a good way in how so much happened culminating in an excellent cliffhanger destined to rock Matt Murdock’s world.