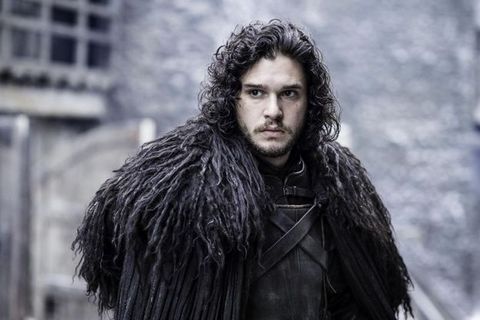 For the first time since Season 1, Game of Thrones seems wide open and it’s led to the most satisfying and compelling season at this stage in the series thus far. Granted, we’re at the halfway point, but you don’t get the sense that the showrunners are going to suddenly fumble this elaborate setup and fail to stick the landing in the second half.

A major contributor to this season’s excitement is the feeling that all the characters are circling one another waiting for a moment’s vulnerability to take out their opponents.

Ser Barristan’s murder might have created that opening for Daenerys’ foes as the loss of one of her most trusted advisers and friends has her acting on emotions rather than what’s best for the nation of Mereen. While she executed an aide for killing a Son of the Harpy, Danny decides to make an example of the masters and round them up — including one of her advisers Hizdahr zo Loraq — for a little Mother’s Day BBQ with her dragons. Unfortunately for the masters, they’re not only the guests, but the main course for her dragons. After letting one get charred and dismembered, Danny lets the rest think on it hoping to get one to fess up to the ambush that led to Barristan’s death. Danny is dearly in need of some wise counsel as she is flip flopping so much that no one in Mereen knows which way she’ll go from one day to the next. You could even say she’s acting like the Mad Queen Targaryen.

Missandei spends most of the episode by Grey Worm’s beside while he recuperates. When he awakes, Grey Worm confesses during the attack he was afraid he wouldn’t see her again and that’s more than enough for Missandei to give into all that tension they’ve had and climb into bed for a kiss that actually doesn’t creep us out. Which of the two are we figuring is the most frustrated by the fact Grey Worm has been castrated? Danny considers Missandei’s advice that she can make up her own mind instead of being swayed back and forth by her council. Freshly motivated, Danny tells Hizdahr zo Loraq she’s re-opening the fighter pits for free men only and will marry a respected leader of an ancient family. And Hizdahr zo Loraq has just gotten engaged! Congratulations? 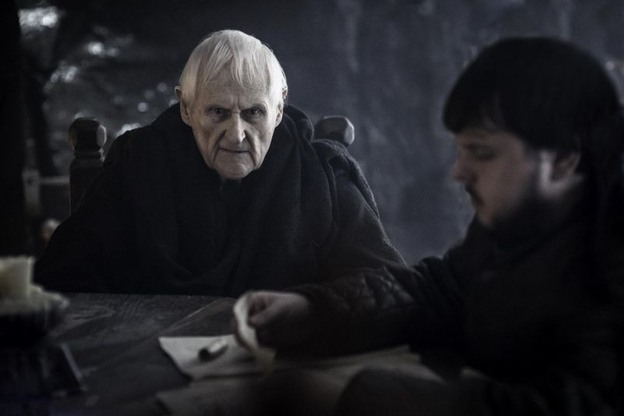 At The Wall, Jon Snow seeks advice from Maester Aemon, who reminds Jon that he’s in charge and doesn’t need to ask advice since being the Lord Commander isn’t a popularity contest. Jon wants to bring The Wildlings to the other side of The Wall so they don’t have to worry about the walkers and he doesn’t have to worry about the walkers adding to their numbers. Winter is coming after all.  And to his credit, Jon didn’t buckle when presenting the argument to The Wildings or the Night’s Watch, even if it put him odds with some of his closest allies, including his steward who watched the Wildlings kill everyone he knew. This was the kind of decision Alliser was afraid of when Jon was nominated as Lord Commander and this decision could have some major fallout. Once again though, Jon is showing he learned the lessons from his father well about being the leader even in the face of unpopular decisions.[irp]

As Jon sets out to discuss the treaty with The Wildlings, Stannis readies his troops for the march on Winterfell. If you’re a betting man, that should take his forces say…four episodes to arrive — just in time for a few more important players to get taken off the board. Before he goes, Stannis meets with Sam and tells him his father was the only man who defeated Stannis’ brother Robert in battle. Stannis is becoming the great historian this season filling in all kinds of interesting blanks. He encourages Sam to keep working to find a way to beat the walkers to further give Sam a sense of purpose this season.

Just outside the gates of Winterfell, Brienne and Pod are keeping a long-distance watchful eye on Sansa. Brienne tries to get a message to a servant, but she probably should have determined if he’s a Stark loyalist before revealing herself. I’m still betting on her costing Stannis this important victory at Winterfell if not outright killing him. My prediction won’t seem half as brilliant if all the book readers already know that’s the outcome, but I’m sticking with it. 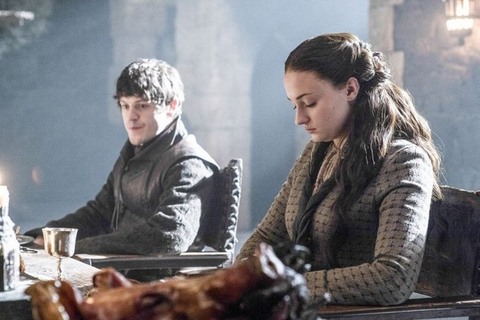 Back to the creepiness thanks to some dedicated Ramsay Bolton time. First, he assures his mistress Miranda he’ll still make time for her on the side after getting married to Sansa, but she better not bore him  — the skin flaying inference is more than enough. To remind him she’s anything but boring, Miranda bites his lip until it’s bloody. Ramsay is on some crazy kinky stuff.

A servant drops by Sansa’s quarters to tell her she’s not alone and if she’s ever in need to light a candle in the North Tower. That’s the same tower brother Bran got dropped from after catching Cersei and Jaime in their extra special sibling bonding time and got paralyzed as a result. Sansa stops by the tower and Miranda introduces herself. She’s got a surprise for Sansa. Please tell me the Bolton’s don’t have Caitlin’s body still … The uncomfortably long walk down the dark tunnel with Ramsay’s dogs barking behind their cages made this scene even more unnerving. At the final gate, Sansa sees the traitorous Theon/Reek.

With this surprise reunion out of the way, Ramsay has Reek serve Roose, his wife and Sansa dinner. And while he’s at it, Ramsay makes Reek apologize for killing Sansa’s brothers. Little Finger would be disappointed with Sansa’s lack of a poker face here. I know someone has to carry on the spiteful bastard role vacated by Joffrey, but I can’t wait for him to go through the sharp end of a sword, dagger or a rusty fork. Roose has his own surprise: his wife is pregnant and the Maester is pretty sure it’s gonna be a boy. 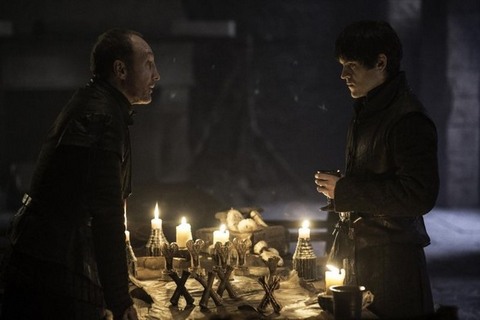 Roose shares with Ramsay a bit later that Ramsay may be a bastard, but Roose is still top dog on our characters we need to see get killed last week list as he tells Ramsay his mother was married to another man and Roose had him hung then raped his mother by the tree. Yeesh. This whole Bolton line probably just needs to get wiped out at this rate. Roose assures Ramsay he needs him to help stave off Stannis’ army (and who snitched on that?) and Ramsay is giddy at the prospect of finding new ways to torture people.

Finally, Ser Jorrah is taking Tyrion through Old Valyria, home of the Stone Men. This was where everyone wanted to banish Stannis’ daughter. The backdrops for this season have been impressive, but this setting was spectacular and became even more memorable as Danny’s wandering dragon flies overhead. That unexpected diversion was enough to make Jorrah miss Stone Men sneaking up on the boat and attacking them. The Stone Men transfer the grayscale skin decay with but a touch so Jorrah warns Tyrion to avoid being grabbed. To avoid the plague, Tyrion dives into the river only for a Stone Men to clutch his ankle — but did he make contact with the skin? 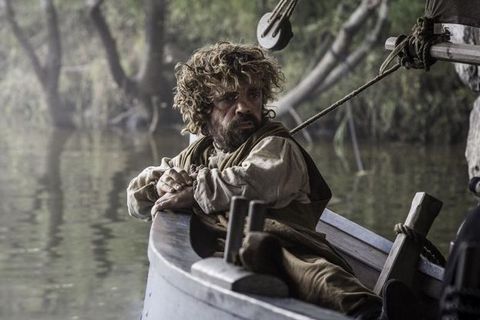 While this would have been perfectly fine for an ending, Jorrah brings Tyrion to shore as they plan their next course of action. Tyrion survived unscathed, but Jorrah did get touched on his wrist and is already showing signs. Quick, get that man some Allegra-D!

Jon and Danny made some major power moves while Sansa realizes the extent of the crazy household that now rules Winterfell. Every storyline has some great momentum as we get to the second half of the season and beyond Stannis’ death (because nothing good happens to the Stark clan), I can’t figure out how anything else turns out — exactly how it should be at this point in the series. How did you like this episode?

One thought on “Game of Thrones Kill the Boy recap S5, Ep 5”