While NBC showed little love, it seems just about everyone else wants to give ‘Constantine’ a second chance even if it’s not on his own show. 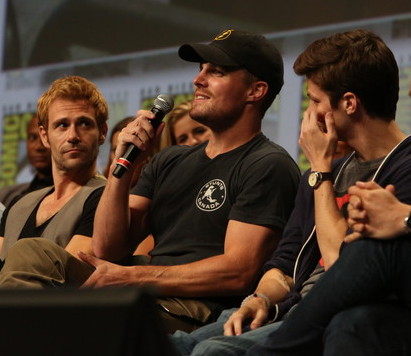 In an interview with Variety, ‘Arrow’ showrunner Marc Guggenheim said “there’s a lot of desire on everyone’s part” to bring the character into the shared DC TV universe. “It would be wonderful and we certainly have a million ideas — it’s hard for me to say mainly because A: it’s not my decision to make and B: with ‘Constantine’ being shopped around to other networks… it’s really hard to make plans when a show’s kind of in limbo.”

‘Arrow’ star Stephen Amell and ‘The Flash’ star Grant Gustin have also expressed interest in appearing in future episodes of ‘Constantine’ wherever it might land.

Guggenheim went on to warn “a lot of the pieces are in place, except for that one final piece, which is what’s the fate of ‘Constantine’? That’s the tricky thing. But it comes up in the writers’ room constantly — we have a number of ideas, one idea that’s particularly exciting to me. We’re in a little bit of a wait-and-see mode, like you guys are.”

So many new possibilities. And it’s certainly encouraging that Constantine has serious backing with not just DC Entertainment (naturally) but with Amell and Gustin so which would you prefer? Matt Ryan’s Constantine occasionally popping up and interacting with the other DC CW TV heroes or getting a second season?