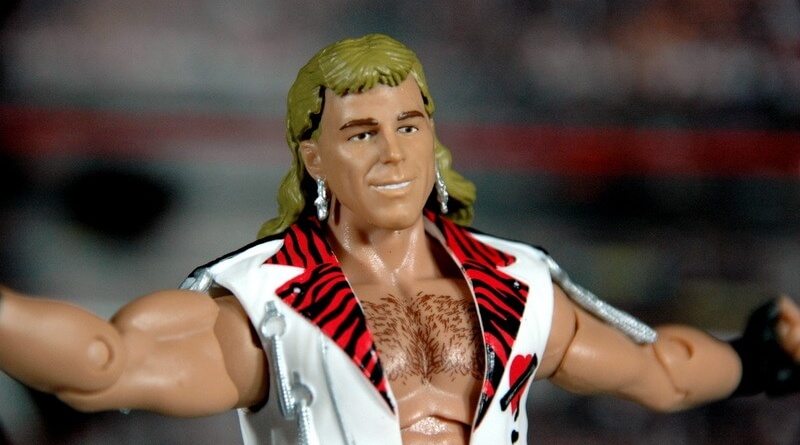 As an active wrestler when Mattel acquired the WWE license, we’ve gotten a nice assortment of the various looks of ‘The Heartbreak Kid.’ With their latest, Mattel gives us Michaels’ first solo attire after his vicious split with his Rockers tag team partner Marty Jannetty, which kicked off one of the most legendary careers of all time.

Is the figure sweet or heartbreak for collectors? Let’s find out! 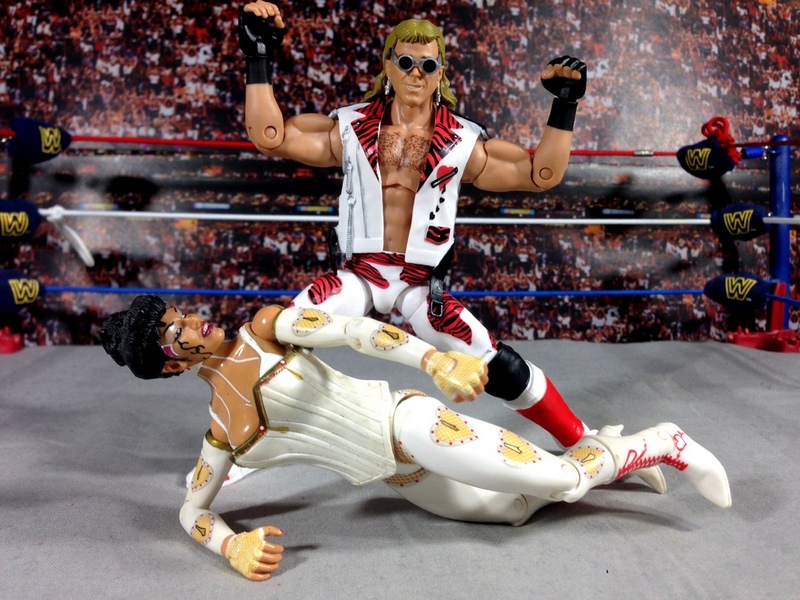 Packaging: There’s not a ton of difference between this and the regular Flashback figures. That’s sure to please MOC collectors who want some consistency with their figures, but unlike the DM Hulk Hogan, the packaging does little to justify the higher price tag. It’s more similar to the Target exclusive Rocky Maivia figure as it looks like a regular Elite from the front and sides, but is solely character specific on the back. The inner package features a backdrop with the zebra blotches like HBK’s tights.

There’s some solid personalization, which I’m a big fan of, especially when Mattel specifically states the attire reference.

Likeness:  Mattel hasn’t had a lot of problems capturing Michaels’ likeness and that streak continues with a solid younger head sculpt. It seems like the hair could be a bit higher and fluffier as it’s a little flat, but that’s my biggest gripe.

Body parts perspective-wise, Mattel nailed this one with all the proper selections even down to the boot choice, something that has occasionally been a problem with the line.

Paint: The white and red attire will certainly stand out in your collection, which I appreciate. My figure had some black wipe marks on its right leg — always annoying with exclusives as you run the risk of returning it and getting another problematic figure.

Beyond that the paintwork is solid beyond the painted flesh portion in the glove. Mattel will sometimes have trouble avoided a green tint to blonde hair, but HBK’s dirty blonde look is captured here accurately. The pattern prints are clean and the vest lettering is smooth.

Scale: Mattel rarely botches scale and HBK is the more standard average body so there’s little chance of them messing the figure up by suddenly making him as tall as The Undertaker.

Articulation:  Elite articulation shines here and with a wrestler as fluid as HBK, it’s necessary to mimic all of his moves although you’ll have to get creative to recreate ‘Sweet Chin Music’ unassisted.

Accessories: Here’s where the value really takes a hit. Ringside typically packs a reasonable amount of accessories in their exclusives from a cloth T-shirt, character specific accessory and a detailed title belt. HBK comes with sunglasses, a vest and non-removable earrings.

Were this a regular Elite it’d be disappointing, but for an exclusive it’s borderline deal-breaker. Had Mattel/RSC included one of HBK’s floor length mirrors (that could be reused for a Narcissist Flashback) you’d feel better about what you’re getting here.

Worth it? Regular Elites range in prices these days from $16 to $21 depending on the retailer so you’re essentially paying double for a limited run exclusive.

The lack of accessories really puts a greater emphasis on the actual figure delivering. Fortunately there’s not a lot to complain about with the actual figure, which is an excellent rendition of HBK’s early singles career. 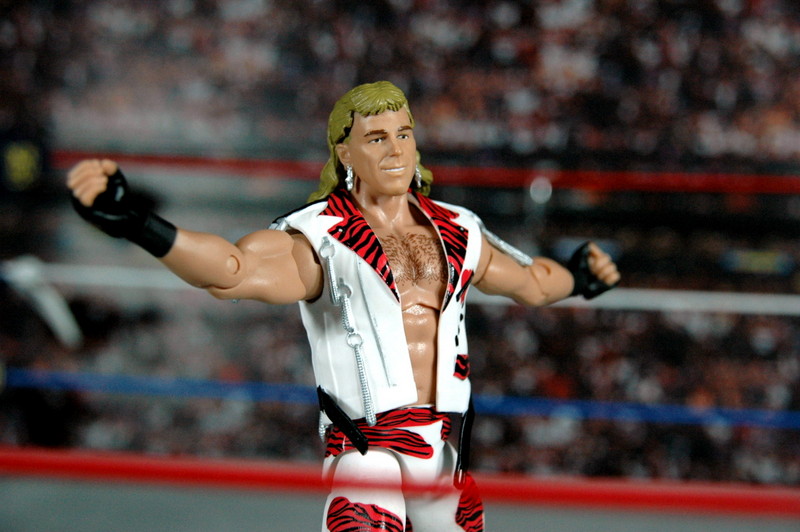 How vital this figure is largely depends if you’re a big HBK fan as this depicts Michaels just before his true breakout as a star courtesy the Wrestlemania 10 ladder match. This attire does fit in well for a 92 collection, but the pickings for possible opponents are slim since Mattel has yet to give us a El Matador, singles Marty Jannetty, a braided British Bulldog or Tatanka, but that’s what wish lists are for, right?

Where you can get it? As a Ringside Collectibles exclusive, you definitely can get it here. http://www.ringsidecollectibles.com/shawn-michaels-hbk-wwe-figure-exclusive-rex-094.html

Like those excellent wrestling backdrops? Kanestheman and walkingcondominium made most of them and you can print them out here: https://sites.google.com/site/ringskirts/home/downloads

Or if you’re a big HBK fan, check out his page on WWE Shop: New Shawn Michaels Appreciation Night Merchandise at WWEShop.com!

Every purchase you make there by clicking on the link helps kick back a little something to Lyles Movie Files. Thanks for your help!