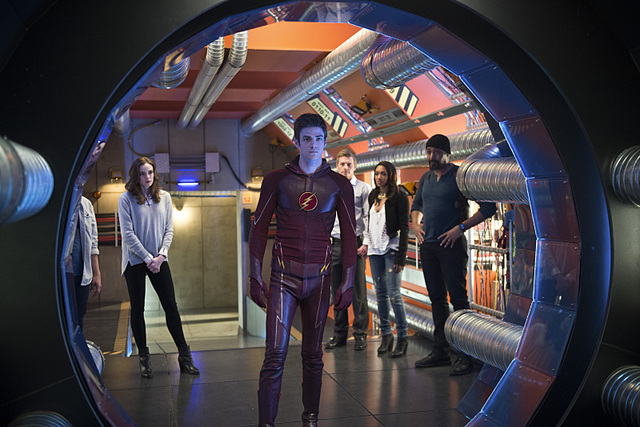 After last week’s so good it could have been the season finale installment, ‘The Flash’ more than made good on its unique opportunity to neatly wrap up its spectacular first season with an epilogue episode that packed just as much emotional heft as last week’s epic superhero showdown. And if there were any doubts before, ‘The Flash’ made it clear that it’s now taken the lead as the best comic book based show on TV.

Tonight was all about Barry’s choice: go back in time and prevent Reverse Flash from killing his mother and living a normal life or retain status quo where he is The Flash and the only one who’s life is negatively impacted is his father, who would remain stuck in jail after being framed for killing Nora. 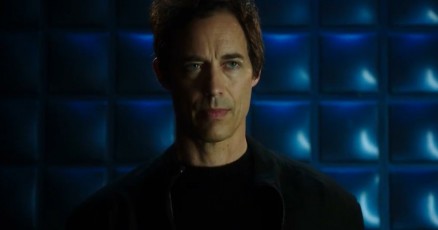 While putting on a brave front for Barry, each of Team Flash knew there lives would likely be dramatically different if Barry made the deal with Reverse Flash (who wanted a ride home to the future for his assistance). The episode was a taxing one on the old Kleenex box as Barry sought guidance from his surrogate father Joe, his actual father Henry and Iris. Each of these moments were strong scenes paying off the season long investments in these various relationships.

With Wells/Eobard Thawne/Reverse Flash safely tucked away in a STAR Labs prison cell, Prof. Stein filled in as resident super genius. We haven’t had enough of Robbie Amell and Victor Garber this season and seeing how smoothly they were incorporated in the episode I kinda wish Firestorm would remain on ‘The Flash’ and not be featured in ‘DC’s Legends of Tomorrow.’ Caitlin and Ronnie have a quickie wedding that felt so rushed it seemed a given that one of them wasn’t going to survive the episode. 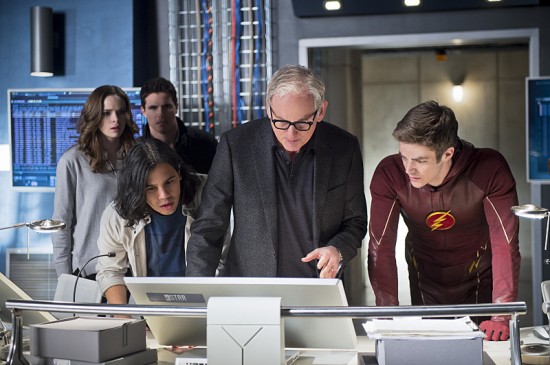 Stein offers a pep talk to Eddie, who’s still smarting over Wells’ revelation that Eddie’s the nearly forgotten loser in the Thawne family tree, but Stein suggests it was no coincidence that Reverse Flash landed in the same time frame as his ancestor. Buoyed by the encouragement that his life isn’t predestined to be awful, Eddie reconnects with Iris. Candice Patton did an excellent job of portraying Iris’ inner conflict of feeling free to move forward with Barry after Eddie called off their relationship and now struggling to be excited about the prospect of a future with Eddie.

Stein provided the downside to Barry’s trip through time — he’d have to reach Mach 2 to travel through time and save his mother in less than two minutes otherwise a black hole would storm out of control and possibly create a global catastrophe. Every possible sign was making it clearer that Barry needed to abandon this plan as the risks were too great, but his quest to save his mother has been the dominant storyline all season and Barry had to at least put himself in position to save Nora — no matter the costs. 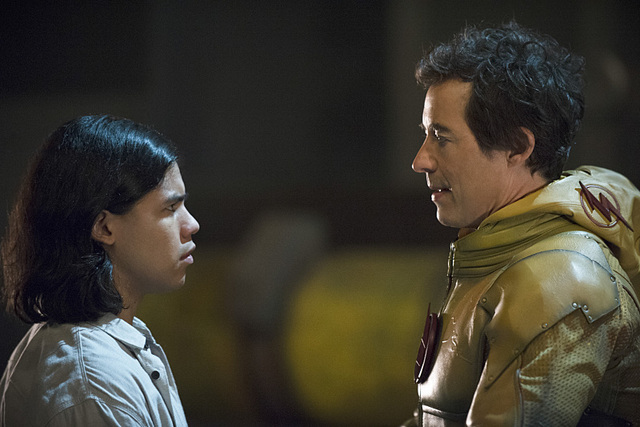 It was nice that no one fully trusted Wells’ guidance at face value as the wounds from his betrayal are still far too fresh. Yet it made for a solid touch that Cisco was curious about how Wells did the costume ring trick. Tom Cavanagh had been killing it all year, but he’s been even more of a treat now that Wells can put his villainous nature on full display. In one of the best exchanges of the night, Cisco confronts him about killing him in an alternate timeline and Wells apologizes — not for killing Cisco as he’s sure he had a good reason — but that Cisco remembered. Wells theorizes that Cisco was affected by the particle explosion as well and has the gall to seek appreciation from Cisco for his gift.

Finally it was time for the moment of truth. Barry builds enough speed to create the wormhole and gets downstairs to see his future self battling Reverse Flash. Just as future Flash takes young Barry to safety, the cue present day Barry was awaiting to save Nora, future Flash spots his past self and gestures that he stand down and let Nora get killed.  Deep down it’s what Barry knew was the right decision all along and while his friends couldn’t make his decision for him, having his future self tell him to stay the course it was enough for Barry to make the painfully heroic sacrifice. But this trip to the past wasn’t a complete loss as Barry has an opportunity to say goodbye to Nora and tell her he’s alright.[irp] 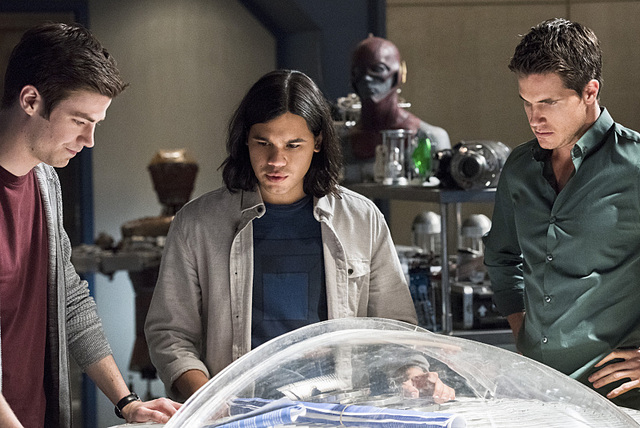 Back in the present day future (it’s not nearly as confusing as it sounds) Wells boards the Time Sphere that Cisco created to aid his return to the future. In a fun tease, the helmet of the Jay Garrick version Flash comes through the wormhole and Wells wants no part of this possible encounter and prepares to go home just as Barry returns and smashes the Time Sphere.

Without the aid of Arrow and Firestorm, Barry is still not the equal to Reverse Flash, who pummels him and prepares for the killing blow when a shot rings through the chamber. But it’s not Eobard Thawne who takes the bullet, but Eddie Thawne, who kills himself to prevent Eobard from tormenting Iris and his friends. Jesse L. Martin and Patton were tremendous in their reactions. With Eddie dead, Eobard fades from existence, but not before his real face is revealed allowing Barry and Cisco to see the true identity of their tormentor.

Team Flash can’t grieve Eddie’s death for long as the worm hole has spiraled out of control and is now tearing up Central City — we get a few reaction shots from established characters like Henry, Capt. Singh, Captain Cold and Kendra Saunders aka Hawkgirl (Ciara Renee) — before Barry speeds off into the wormhole wrapping up season 1 with a major cliffhanger. 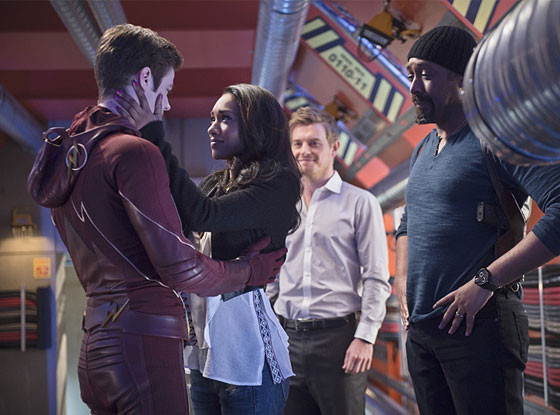 I didn’t quite see the need for another episode after last week’s thrilling outing, but this was a necessary conclusion for several subplots as well as tease some very intriguing possibilities for Season 2. No sense in the show teasing Jay Garrick without delivering, right? On the comic book show front no offering was as consistently enjoyable as ‘The Flash,’ which proved being a hero can be fun while occasionally exploring more serious themes.

There were doubts if a show working with a CW budget could handle the demands of a character like the Flash, but each week those concerns subsided a little more with every outstanding effort to the point where anything is possible on this series and the wait for Season 2 is going to feel so incredibly slow.