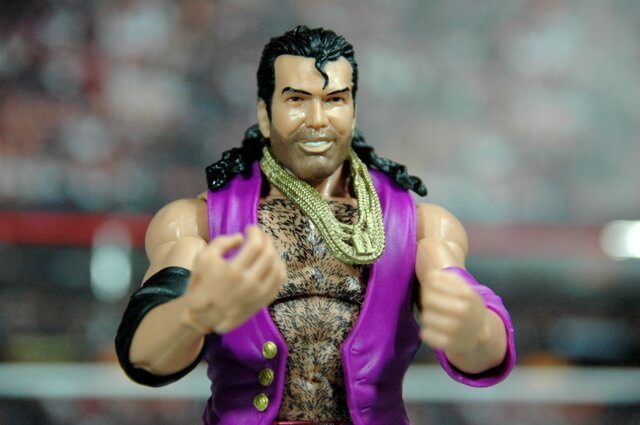 Razor Ramon was ominously sounding like he was going to be a character we’d never see in our Mattel WWE collections with Mattel team members suggesting Scott Hall aka Razor Ramon was on the ‘don’t even think about it’ list like Owen Hart and Chris Benoit.

Fortunately Hall seems to have successfully battled through his personal demons (far more important than a figure of course) and his relationship with WWE has been restored to the point he was selected for the Hall of Fame last year. That paved the way for Mattel to knock out a big name on legend/flashback collectors’ lists with the first of hopefully many incarnations of Hall most iconic character – The Bad Guy – in their Defining Moments line. But is the figure all good? Let’s break it down!

Packaging: The Defining Moments is my favorite of the standard 6″ offerings as you see some of where the extra costs is going. Like the DM Hulk Hogan, the packaging contains a great amount of personalization. In this case, the inner packaging is designed like Razor’s vest complete with gold chains. If we’re paying more for essentially regular Elite figures of in-demand characters at least the classy packaging softens the blow somewhat.

Likeness: A little bit more often than Mattel fans would want to admit, Mattel headsculpts frequently come up lacking compared to their Jakks counterparts. This time, Mattel decidedly has the advantage as this looks like Razor. No questionable ponytail sculpt like the Jakks version and the hair sculpt, which is surprisingly important to an accurate Razor portrayal, arcs down and includes the Superman swirl.

From a body parts perspective, Mattel should have gone with larger and longer arms for Razor as he looks a bit too skinny and stubby. Some of that is due to the vest and the elbow pads, but the Bad Guy didn’t have scrawny arms. If you’re so inclined, PJ over at Wfigs.com worked out an easy enough solution of swapping the arms (not the shoulders) from the Elite 30 Legion of Doom Hawk figure, which is a perfect skin tone match. 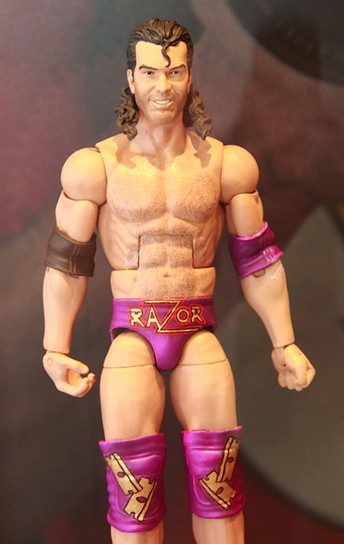 Paint: When Mattel first debuted Razor at San Diego Comic Con, there was a rush of excitement of this long awaited figure’s release, but it was hard to ignore some of the flaws.

To their credit, Mattel addressed them (giraffe neck, a way too dark painted beard instead of stubble, the tights logo being too small) to provide a largely accurate Razor Ramon. Just like the SummerSlam Heritage Triple H, Mattel can’t quite get the right shade of purple down. Razor wore a deep, royal shade of purple.

Occasionally in the right light, the figure looks more purple than magenta, but it definitely isn’t a good match for Razor’s purple. It’s somewhat annoying as to why Mattel can’t get it right, but botching royal purple is still preferable to yet another Mattel figure in red and black, both of which are viable options for Razor so maybe I shouldn’t complain too much? Razor was one of the more colorful New Generation members so hopefully we’ll see other attires like his green, blue or yellow tights.

For this figure, the paint is fairly solid. The tampo on the kneepads, tights and vest look spot on. If you have the option of looking through numerous figures, make sure you check the eyes carefully. My first figure’s right eye wasn’t fully painted and thanks to the expression, it looked a bit off. Mattel went a bit overboard with the chest hair, but just chalk that up to oozing Machismo.

Scale: Clocking in at 6’5″ Razor stands about right next to his fellow Kliq-mate Diesel, who was billed at 6’9″ and just a bit shorter than nWo stable-mate Hulk Hogan at 6’7″ and taller than the HBK and Bret Hart size wrestlers. That bodes well for the inevitable Scott Hall nWo version as the body type (besides the arms) won’t need any adjusting.

Articulation: Here’s where the Elite articulation really shines to the point where it’s hard to imagine a time of getting excited for wrestling figures that couldn’t actually perform their signature moves. My Razor was a bit loose with the legs, but it wasn’t anything a little rubber band couldn’t fix.

For the most part you’ll be able to display all of Razor’s moves except his finisher, The Razor’s Edge. In theory, that’s a simple matter of swapping out some open hands to allow Razor to hold another figure up so it’s not that big a deal. He does have one open hand to allow him to hold his included title and grasp for the Intercontinental belt in a ladder match.

Accessories: Razor comes with his signature gold chains — one piece that has some depth to show Razor didn’t wear the same length gold but they’re so stiff they don’t lay down around his chest. The removable vest is so much of his outfit it’s hard to count that especially for a DM figure, but it’s there. It’s rubber, but vests are much easier to remove and a cloth vest, while a nice extra, isn’t necessary in this case.

As has been the case with most recent title paintjobs, it’s underwhelming with only the globe painted. Earlier titles had painting around the wording so it may be worth tracking down older versions.

The only thing missing from Razor is his signature toothpicks. Maybe that’s something Mattel would include as an alternate headsculpt for the next Razor figure? Worth it? Regular Elites range in prices these days from $16 to $21 depending on the retailer. Beyond the well-done packaging there’s no other reason Razor warrants a higher price tag. Only thing is, like Hogan, Razor has been a highly demanded character and Mattel knows it so we’re paying more in essence for a premium character.

Tossing in a ladder would have balanced out the costs a bit as a vest, chains and belt are pretty skimpy for regular Elite figures. Based solely on value and the need to swap out the arms, Razor’s probably not worth the $26 price tag. Razor was a key member of the New Generation Era though so nostalgia and filling a major gap in the collection makes this a no-brainer.

Where you can get it? Razor is pretty much everywhere at this point. You can find him at Target, Wal-Mart, Toys R Us and Amazon. You can pick him up here: WWE Defining Moments Razor Ramon Figure 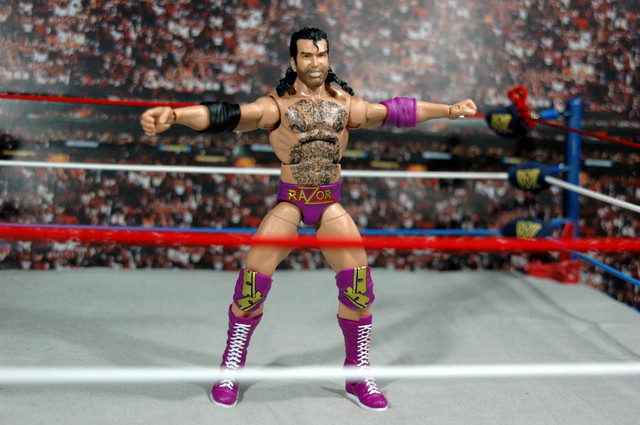