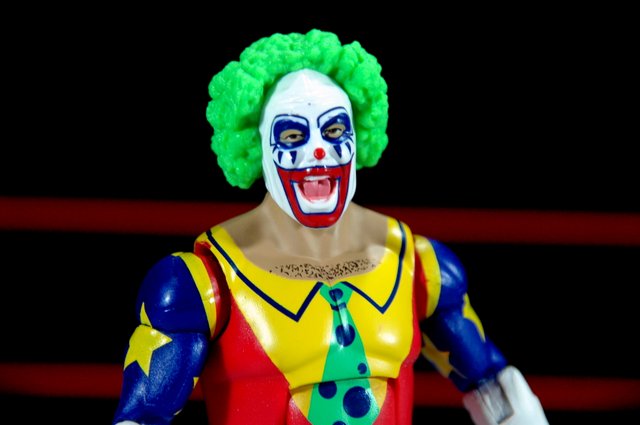 My love of wrestling has only ever truly been threatened once in 1993. Senior year of high school and some disillusionment with the New Generation in the WWF was taking its toll on my fandom. Like any decent addict, the mini hiatus didn’t last long and soon I was feverishly renting VHS tapes (remember them?) from Blockbuster (remember them?) trying to catch up on everything I’d missed.

One of the more intriguing New Generation characters was Doink the Clown, one of Vince McMahon’s most ingenious creations. Doink was an evil clown who taunted fans and harassed fan favorites like Bret Hart, ‘Macho Man’ Randy Savage and Crush.

As someone who still gets unnerved at the thought of ‘It’s’ Pennywise the Clown, Doink was a terrific character and even better heel. Unfortunately, Doink got to be too popular and was quickly turned into a face and almost instantly stopped being cool. And he had a midget sidekick named Dink. Sigh.

Mattel lets us relive the good old days of The Clown Prince of the WWF with its Flashback figure in Wave 34 of its Elite line. Is the joke on collectors or will Doink get the last laugh with a prominent position on our shelves?

Packaging: I’m not close to quoting Owen Hart, but it’s almost time for a change. The Elite packaging is nice and clean with strong colors, but the back still could use more personalization. I’m curious to see what types of changes Mattel has in store for next year’s offerings, which we may see next month with San Diego Comic Con reveals.

Likeness: Doink was originally played by Matt Osborne (Borne) and then the gimmick got passed around to at least four other wrestlers so the likeness isn’t as key here as it would be on some others. More importantly, the makeup and thicker, stocky build was faithfully captured. While I’m generally not a fan of open-mouthed scans, the mid-laugh expression is appropriate and well executed with Doink.

Paint: The paintjob is no laughing matter (sorry). To be fair, Doink has one of the most complex paintjobs in Mattel’s WWE line, but it’s disappointing to have so many issues especially when you’re unable to see all the potential problems.

I’ve been able to see several Doinks on pegs and each have some pretty obvious paint issues. Some have blotches on the face while others have some scratches so seeing one with a decent paintjob in the package is a major accomplishment.

But then you’ll likely find another story when you open the figure. Mine had a number of paint scratches on the blue portion of the bodysuit. I’ll likely chance using some Goof Off on it to see if I can remove the most glaring offenders, but that’s definitely not something you’ll be able to spot while it’s in the package.  Basically the odds of getting an immaculately cleanly painted Doink are slim, but if you by some chance have the option of choosing (like most Flashbacks, Doink is lightly packed in the case) be a bit more careful than normal in choosing the best paintjob. 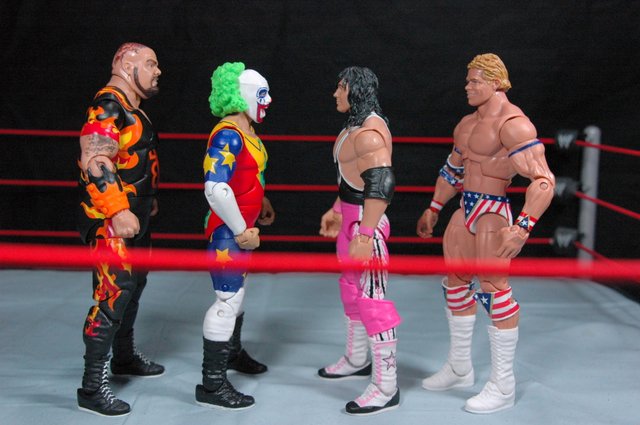 Scale: Doink was billed at at 6’1″ the same as Bret Hart. Luger is 6’4″, the same as the slightly scaled-up Bam Bam Bigelow so Doink is perfectly scaled in the line. That of course, always makes me happy to see Mattel still trying to maintain the scale standard they started from the beginning.

Articulation: Doink has the standard Elite articulation so there’s no move you’ll have any problem having him mimic. The joints on my figure were nice and tight and the wigs are positioned so they don’t restrict any of the neck articulation.

Accessories: In a first for Mattel, we get three removable wigs to capture Doink’s various looks. It’s a neat idea and fitting for the character in addition to the bucket, but I’d rather have had Doink’s coat. The budget for that was probably way too cost-prohibitive considering Doink’s already elaborate paint scheme. Just once I’d love to get a removable cloth coat with him. Maybe next time?

The wigs attach on and off easily enough thanks to a snug peg that fits tightly into a hole in Doink’s head. I didn’t mess around too much with it, but I didn’t get the sense that any wig would pop off if you’re playing/posing with the figure.

Worth it? There’s a disappointing shortage of New Generation era heels so if you’re a fan of that timeframe you’ll almost certainly want to get Doink. (Random bonus: With Doink’s arrival in the line, we now have every member of the WWF Wrestlemania: The Arcade Game).

While I would have preferred a jacket, the wacky wigs and buckets are fun accessories. Doink is one of those figures that really pops on your display so I’m thinking he’ll appeal to collectors who weren’t even fans of the New Generation Era. 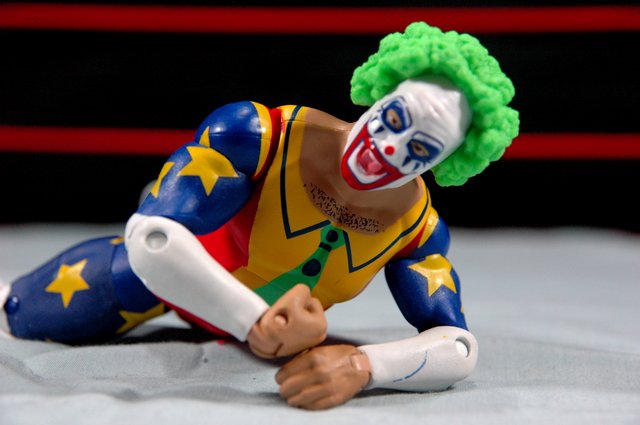 Where you can get it? Target and Toys R Us is going to be your best bet, but you can prowl Amazon when it drops to regular prices. WWE Elite Collection Series #34 Doink The Clown Figure