Tywin Lannister and Roose Bolton get beaten out for Worst Father while Arya plots an assassination and Dany throws an impromptu BBQ on the penultimate episode of season 5 of Game of Thrones.

Game of Thrones has always worked best in creating its own amazing moments like last week’s incredible Wildlings/Night’s Watch vs. The Wights battle. Too often this episode, it felt like it a GOT take on numerous other pop culture moments leaving me far more underwhelmed than I expected for an Episode 9 aka The Episode When Stuff Gets Real. Yes there were some deaths, but none that were especially shocking considering the build-up this season.

Let’s start off with the main one. In ‘The Illiad,’ the seer Calchas tells Agememnon in order to gain Artemis’ favor and have good conditions in sailing to Troy, he has to sacrifice his daughter Iphigenia. Initially, he’s opposed to the suggestion, but his lust for power gets the better of him and he sacrifices his beloved daughter. 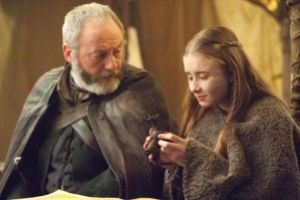 Stannis Baratheon has a similar deliberation as his army is struggling en route to Winterfell. Ramsay Bolton’s ambush party raids Stannis’ camp and levels a catastrophic blow to the march on Winterfell. And while Stannis scoffed at Melisandre’s proposal to sacrifice his daughter, Shireen, at first, he’s come too far to let anything stop him now. Davos seems to have an idea all is not well with his king’s head as he orders him to return to Castle Black for reinforcements, but ignores Davos’ request to take Shireen back. Davos appears to realize Shireen isn’t much longer for this cold, cruel world as he thanks her for teaching him to read and presents her with a stag statue (and possibly farewell) kiss on the forehead.[irp]

That massive sound you heard was hundreds of Stannis fans climbing off the bandwagon. For his faults, Stannis appeared to have turned the corner and was becoming the king in the making fans could rally behind, but as he coldly watches Shireen get burned at the stake, there’s no hope for redemption for him now. And how will this cruel act sit with Stannis’ forces, who clearly realize how expendable they are if their king is willing to kill his own daughter. It was a pretty terrible look for Stannis that his wife, Selyse, who seemed to loath Shireen, in the end was the one who at least tried to save their daughter.

So in case you worried the truly deplorable treatment of females on the show was reserved for teens and adults, we see that anything can happen to any female on this show.

The Dorne subplot, which started with so much promise appeared to wrap up with a whimper. Prince Doran is fine with Jaime returning to King’s Landing with Myrcella provided Trystane can assume Oberyn’s role on the King’s Council.

Ellaria is not cool with this at all and throws serious shade during this otherwise pleasant meeting. After Doran threatens her if she steps out of line again, Ellaria is much more welcoming to Jaime. She tells him it’s no big deal if he’s sleeping with his sister and the girl who thinks he’s her uncle is actually her father and Ellaria suggests she knows Myrcella and Jaime had nothing to do with Oberyn’s death. Hoping there’s much more on this otherwise there was a lot of nothing on this journey to Dorne.

In Arya’s subplot, there was a very strong ‘Assassin’s Creed’ theme with Arya initially plotting on killing the merchant thin man only to get sidetracked when Meryn Trant — one of the few names on her ‘Kill Bill’ list that’s still alive has arrived as the bodyguard for Lord Tyrell.

This leads Arya to doing the worst tailing and observing ever, following Meryn to a whore house and continually coming thisclose from him recognizing her. Meryn has a thing for (very) young prostitutes and tells the madam he’ll need a fresh one tomorrow. One guess where this is going as Arya will be channeling her inner O-Ren Ishii.

Jon returned back to The Wall with a slew of Wildlings — including a giant — in tow. Jon’s not altogether sure if Alliser Thorne is gonna let them in so they can get on the other side of the Wall. Alliser warns Jon his good heart is going to get them all killed. Jon either needs to sleep with one eye open, a nightlight or Ghost on guard nearby.

Now for the episode’s standout scene. Dany was settling in the Mereene arena for some good old fashion pit fighting to the death. Nearly her entire entourage including intended betrothed Hizdahr zo Loraq and newcomer Tyrion were at her side in the VIP section. Daario and Hizdahr get into a bit of a debate over the safest bet in pit fighting when Jorah is set for battle.

Dany is still torn over being her by his betrayal and hoping her former closest ally survives. Thankfully for Jorah fans, his name doesn’t pop up on the ‘Ep. 9 GOT Kill Character’ roulette wheel. After he wins his contest, Jorah tosses a spear near Dany striking a Son of the Harpy! The SOH have a heck of a recruitment pitch as dozens of the golden masked men come out in droves as Darrio and Jorah try to stave them off and keep the others safe. Hizdahr isn’t so lucky and gets stabbed and presumably killed.

Not sure about anyone else, but I was getting a strong ‘Episode II: Attack of the Clones’ Geonosis battle during The Sons of the Harpy/Dany’s forces battle. And that was after the ‘Gladiator’ vibe the fight pit sequence offered.

Just as all hope seemed lost, Dany’s dragon Drogo swoops in for a Sons of the Harpy BBQ. Dany climbs on Drogo’s back and they fly off, but I was left wondering what was ti become of the rest of Team Dany since there were still more than enough SOH to kill off all her allies.

As far as riveting Episode 9s go, this was fine — just not the everything has changed moment we’ve come to expect. Stannis became irredeemable while Dany took the next steps to being the ultimate ruler of Westeros. With one episode left, it’ll be interesting to see how this all comes together.

0 thoughts on “Game of Thrones The Dance of Dragons recap S5, E9”