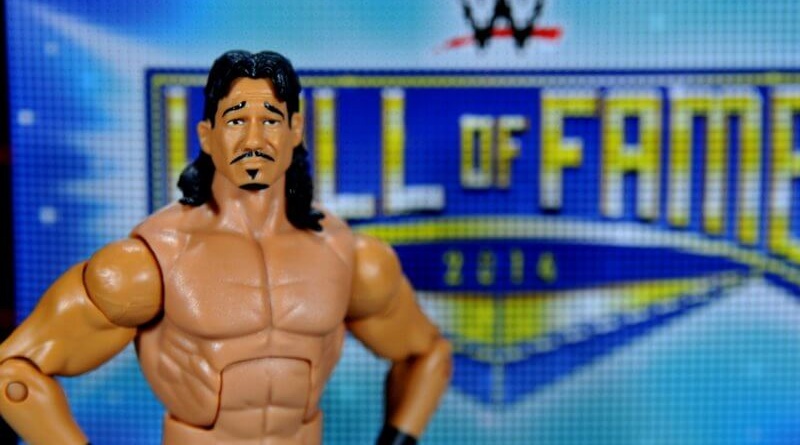 It’s crazy to think this November will have been a decade since Eddie Guerrero died far too soon. He was one of those guys that immediately upon entering the national scene starting with a stint in ECW in 1995, seemed destined to become a major player for years to come.

We got one decade to thrill to Eddie’s classic matches against Dean Malenko and Rey Mysterio Jr. before he assured himself a first ballot entry in the Hall of Fame with his arrival in the WWF. There, he was part of the famed Smackdown Six, cleanly pinned Brock Lesnar for the world title and brought some much needed Latino Heat to the WWF landscape.

Mattel salutes Chavo Guerrero’s favorite wrestler in the second series of its Hall of Fame line. Does Eddie’s second figure hold up to the heat? Let’s find out!

Packaging: I’ve got nothing new to add on the Hall of Fame packaging. It’s decent enough, but there’s nothing to really keep your attention, let alone keep it MOC. Hopefully Wave 3 sees an upgrade to the package appearance. Mattel makes it easy for collectors though as there’s no unnecessary posing and one lone rubber band holding the figure in the tray.

Likeness: This perfectly captures Eddie in his sleazy Latino Heat best. The head sculpt has a ton of character. I’m not completely sure if this isn’t just the same head from the Legends 6 figure with a few modifications.

Upon further very close inspection, the L6 figure had more crow’s feet around the eyes while this version featuring a younger Eddie has a smoother face. That’s interesting attention to detail you may not catch until you check it out very closely. The body parts chosen are dead on and to further differentiate the figure from its L6 counterpart, this Eddie features smaller, less defined arms.

Paint: I’m not sure why the camera kept distorting the color of the chest and the arms, which in normal light are the same color or at least close enough that the naked eye can’t differentiate. My Eddie had a minor bit of a rough go at the paint factory, but not where you may expect.

There’s some paint scarring on the black portion while the gold portion paint doesn’t seem to have finished drying in some areas. The double articulation joint below the knee is painted stuck with mine so it’ll require a hot bath.

The complex design on both sides however came out unscathed, which is weird considering it should have been the main area problems would arise. I’m not sure if it’s really worth trying to track down a better painted version as I think they’ll all have some level of mishaps. If you have the option though, definitely look close for the best right leg paintjob.

I’m sure I say this too often, but this actual effort to stick to scale after Jakks continually disregarded it throughout its tenure as the WWE license holder is much appreciated.

Articulation: Eddie has the standard Elite articulation although mine had a bit of floppy chest. Of all the pieces that can be loose, the chest is the hardest to fix with a dab of superglue. Hopefully I just got the lemon and the norm is nice and tight joints all around.

Accessories: While I continue to despise the plastic shirts as they give a lifejacket appearance more than a T-shirt look, this fits better than most thanks to the lack of sleeves. It’s still not perfect, but is a welcome step in the right direction.

I’d still like a softer plastic to make putting and taking off the shirt easier especially for guys like Eddie with long hair.

In addition to the shirt, Eddie comes with a bundle of roses and a single long stem rose. Far as I remember this is the first time the roses have been included in the line.

The slight sticking point with their inclusion is you know there’s a negative 100% chance Mattel will be able to deliver Eddie’s Mamacita Chyna anytime soon. Sure you can track a Jakks Chyna figure down online (here’s the one I used Jakks Pacific WWF WrestleMania XVII Chyna Figure Series 9

), but it doesn’t hold up very well with Mattel’s offerings. That said, I wonder if exchanging the roses for a European title wouldn’t have been a better option?

Worth it? This is a very well done figure featuring one of the WWF’s all-time greats. The only catch right now though is that most of Eddie’s opponents from that time period (Y2J, Kurt Angle, Perry Saturn, The Hardy Boyz, II Cool and Val Venis) are still awaiting figures so you won’t be able to reenact the majority of his feuds from that era.

Dean Malenko is coming in Elite 37 and we’ve gotta hope a 2000-era Y2J will be revealed at SDCC. I’ve got a feeling this is going to be a sleeper figure that people are going to wish they picked up once more 2000 Attitude Era figures are announced. As the Mattel Flashbacks become incredibly high priced on the secondary market, if you’re on the fence, you’re better off getting it now so you don’t end up paying triple the cost later on.

Where to get it? The Hall of Fame line is exclusive to Target so they’re your best bet. The initial wave has hit most of the U.S. at this point, but some stores are restocking Wave 1 so make sure to call ahead instead of just relying on the DCPI. If you want to save yourself the hassle you can find him now on Amazon.com WWE Elite Hall Of Fame EDDIE GUERRERO Class Of 2006

Check out this video featuring some of Eddie’s career highlights: WWE: Viva La Raza – The Legacy of Eddie Guerrero