I’m kinda blaming ‘Total Divas’ on this pickup. WWE’s reality show featuring some of the stars of the Divas division is oddly addictive and does a far better job of establishing the Divas than anything else on WWE programming.

Easily one of my favorites has been Paige, one of the few cast members who can put together a solid match. Mattel gave Paige the distinction of being one of a handful of Divas to be included in the main Elite line. Does the figure merit getting called up to the main figure line? Let’s find out.

Packaging: After dabbling with the Hall of Fame line for a bit, I appreciate the standard Elite packaging a bit more. I’d still like to see just a bit more personalization and maybe a few more pictures of the wrestler. Mattel makes it easy for collectors though as there’s no unnecessary posing and one lone rubber band holding Paige in the tray. 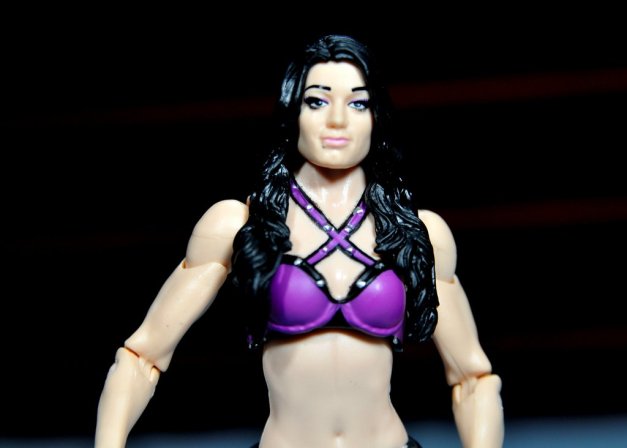 Likeness: Paige is a tough likeness to get down to get. It was interesting to me that the portraits used for the front and the back of the packaging almost look like two different people so I’m giving Mattel slack here.

The biggest issue seems to be the nose, which is probably a bit too broad. From some angles, the figure looks just like Paige, will others make you wish they take another crack at her like they did with numerous AJ Lee attempts before finally getting it perfect (just as she quit the WWE…)

Paint: Paige doesn’t spend hours tanning and Mattel didn’t cheap out here giving the figure a paler skin tone. Paige’s outfit is trickier than it initially appears as the top is sculpted, not painted and there’s three paint applications with the black trim, purple main color and the silver studs. One of the silver notches on her shorts missed a paint application and there was a little overspray on the chest, but I really had to examine the paints closely.Ironically the one time Mattel gets purple correctly on a figure, it’s too dark for the lighter shade Paige wears.

The most important thing you’ll want to be mindful of is the eyes as I’ve seen a couple Paiges on shelves with wonky eye paintjobs that ruined the figure. You may not notice it right away, but that ‘bump’ by her right bottom lip isn’t a mistake — it’s a lip stud.

Scale: Mattel typically doesn’t have problems with scale, but the divas figures have been a bit more problematic with some disastrous efforts (see Layla El) so I’m happy to report Paige won’t set off any scale alarms. At 5’8″ Paige is one of the taller Divas and fits in just right with my pitifully small Divas collection. 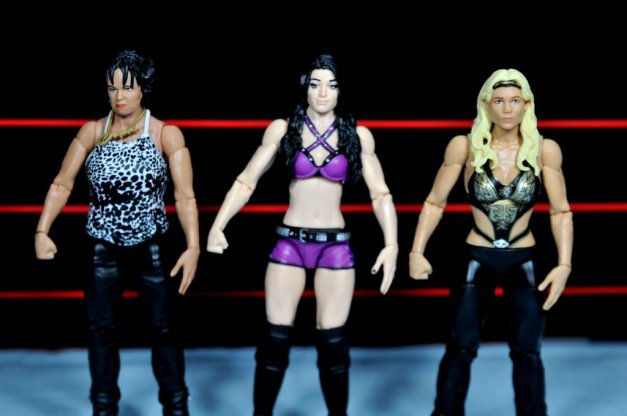 The Vicki Guerrero to the left matches the 5’6″ Vicki’s height if she was wearing heels like the figure while the 5’7″ Beth Phoenix looks just about right with Paige.

Articulation: Like the other divas made so far, Paige features articulation that’s more Elite than Basic with a few exceptions. Typically that works in our favor as we’re paying Basic prices for more of an Elite hybrid.

From posing and playing around with the standard Elites, I was anticipating being able to simulate Paige’s moves just as easily as her Elite male counterparts. Chalk it up to not owning a lot of Divas figures.

Paige lacks the double knee articulation, which will really effect being able to effectively pose her. The hip joint also doesn’t spread as far (yep, no way that couldn’t sound pervy) so that range of motion is limited more than Elite collectors would expect.

Not as surprisingly, the thick hair restricts the side to side and up and down movement. I do really like the chest articulation point, which Mattel is able to conceal with the break in her bra/shirt top.

Accessories: Paige comes with not one, but two vac-metal belts. First, we get the Divas title and NXT title. The NXT title is missing a little paint in the center and outer sides. Fortunately, those are plain white so if you’ve got a steadier hand than me, it should be easy enough to fill in.

The Divas title impressively is very faithfully done to the point you’d need to look closely at the actual title to notice any discrepancies. Greedily, I wish Mattel could have found a way to work in Paige’s leather jacket as she makes a bit of a show of taking it off in her ring entrance, but getting both belts was a welcome bonus. For perspective, the Elite 21 AJ Lee only came with a necklace.

Worth it? It truly depends on your desire to expand your collection to include Divas. For some folks, Paige’s NXT Divas title is a major draw since it seems a certainty that we’ll at least see a figure of former NXT champ Charlotte (and possibly Sasha Banks) at San Diego Comic Con who are far more likely to be included in the accessory-less Basic line.

Paige represents the first NXT Diva to really make good and her current storyline looks to make her the link to bringing in the NXT Divas in her war against The Bellas. As someone who isn’t a big collector of modern characters, Paige definitely has me invested in getting more Divas for her to battle.

Where to get it? As part of the main Elite line, Paige can be found at Toys R Us, Target, Wal-Mart and most online retailers. As is normally the case with any figures carrying two belts, Paige is typically the first one to get plucked from shelves. Combined with the fact she’s a short-packed Diva, if you find one with a good paint job, I’d recommend grabbing her.