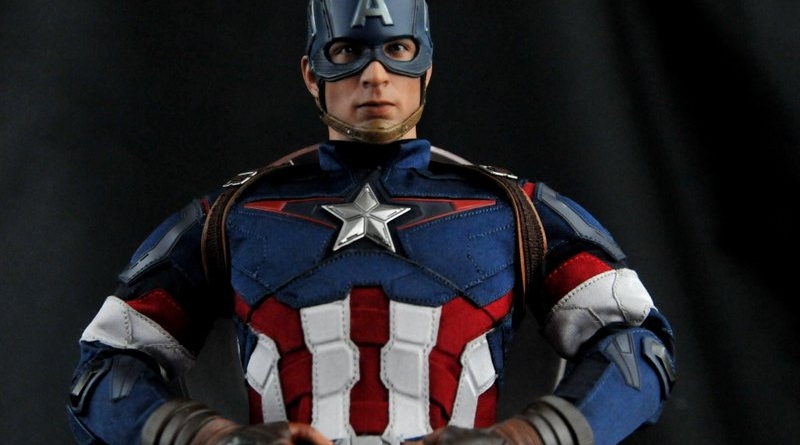 I got in on Hot Toys in the midst of their ‘Marvel’s The Avengers’ run so I missed out on two of the initial offerings – Hawkeye and Captain America. As I quickly got sucked in the rabbit hole that was Hot Toys collecting, both became way too cost prohibitive for me — the bidding for both pretty much starts at $400 — so I was more excited than most to be able to finally add them to my collection with Hot Toys’ ‘Avengers: Age of Ultron’ line.

Now that I’ve finally got my hands on him, it’s time to see if this figure delivered the goods and was worth the wait.

Packaging: Unlike the original Avengers’ line, Hot Toys opts for a more subdued outer box package with a smaller font to offset the red orange cover. As usual, the outer box features a large action portrait of the respective character. A big ‘A’ overlaps the portrait to ensure collectors know this is part of the Age of Ultron line. I like the more dynamic colors here as opposed to the first film packaging that was largely more muted, subdued colors.

Once you remove the outer box, you’ll see the typical window view of the figure, which is largely obscured thanks to the various plastic bags used to keep the figure in place and protect from any paint rubs while in transit. Beyond the leg wraps, which are taped, the bags are easily removed. figures are high-end and the packaging immediately gives you that prestigious feel like you’re about to open up something incredibly special. 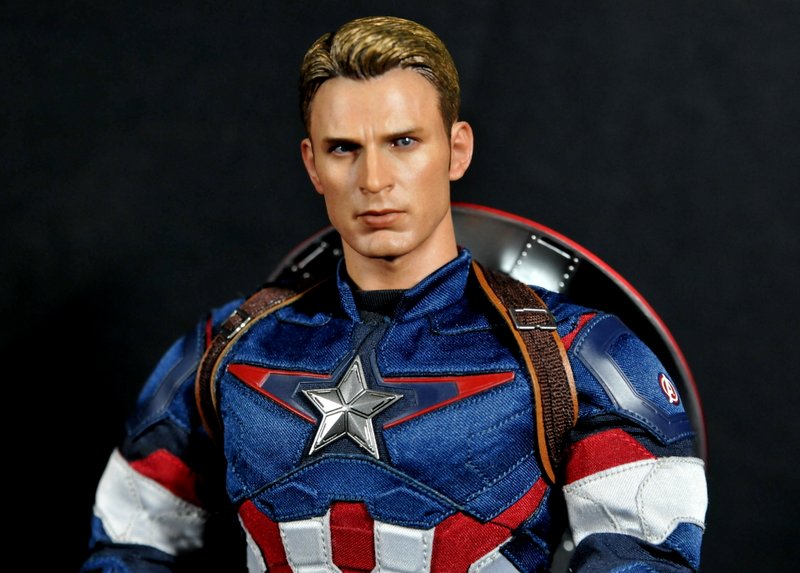 Likeness: Of the numerous Captain Americas we’ve gotten from Hot Toys, this rivals the most recent version from the Captain America/Steve Rogers set.

Hot Toys sculptors have steadily improved on each subsequent take on Chris Evans’ likeness and sculptors Yulli and Yong Kyum, Kim do a bang up job with a stern and focused expression that Cap means business.

The default sculpt features Cap with his mask/helmet and it’s just as good as the unmasked. 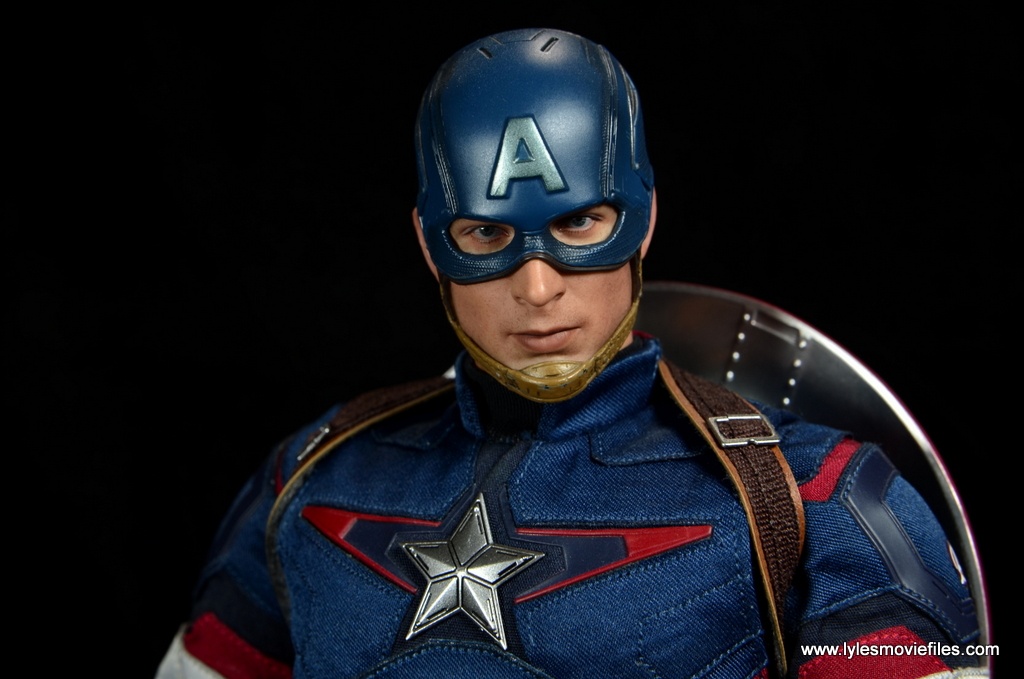 After I first opened the figure, I displayed him with the unmasked head, but then after taking some more pics, I put him back on the shelf with the masked look. It really depends on your preference as both are very well done.

I’m glad that both versions keep a close-mouth scan as I prefer not to have a permanently gritted teeth figure standing front and center in my display.

Paint: Hot Toys is pretty much untouchable on the painting front and Cap hardly breaks the streak. I’m not the biggest fan of the eyes slightly looking off to the side, but I’ll just pretend he’s casting Stark a stern glare to cut the sarcasm and it works in this case.

There’s some nice subtle shading with the hair, which gets darker the further down it gets effectively mirroring Evan’s hair color.

The helmet also has some subtle wear to it to indicate this isn’t the first time Cap has used this helmet and it’s seen some use even if it’s not ready to get retired just yet.

Outfit: The costume has a lot of panels and segments, but that was the design of the movie costume and it’s accurately captured in the figure. 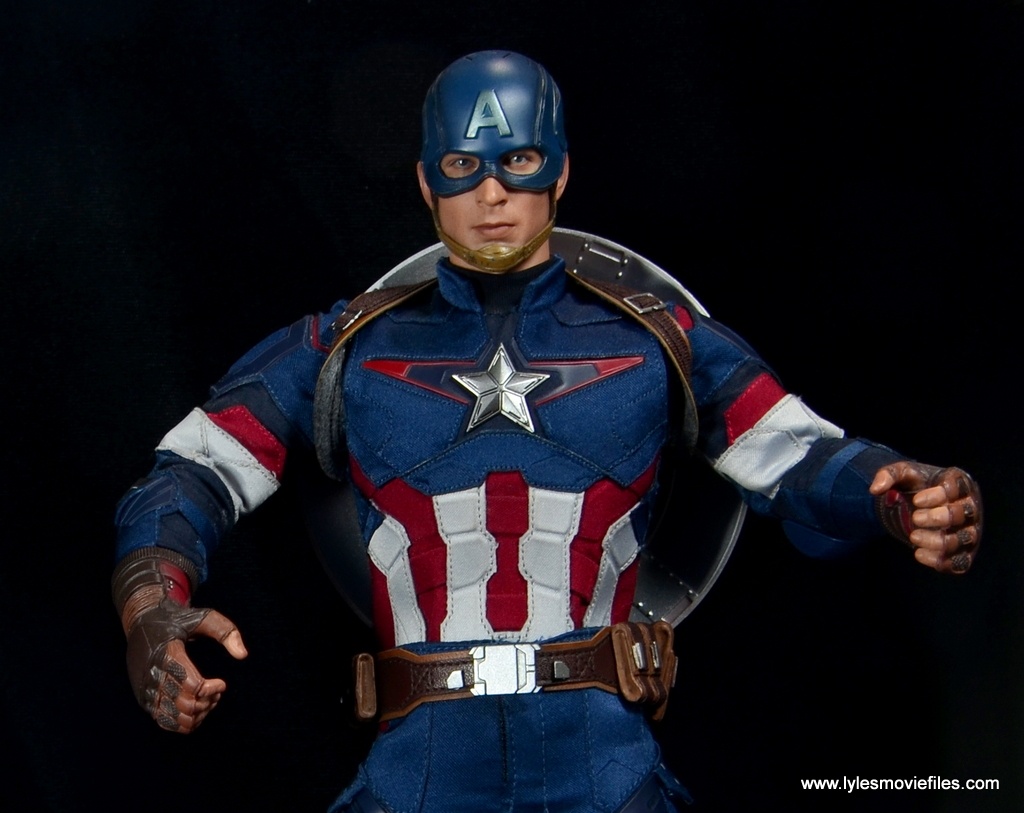 The one nitpick I found that’s slightly off from the source material is the chest star should be outlined in black to blend in with the black turtleneck piece.

The only other deviation I could spot is the blue used for the figure’s costume might be slightly brighter than the film version. I’m hardly one to complain about bright superhero costumes though.The leather harness is appropriately two-toned and it’s nice to see that attention to detail.

Poseability: Cap’s outfit is nice and snug particularly in the arm and shoulders, making some poses a bit tricky, but with a little patience you’ll be able to capture most of the signature movements from the film.

Accessories: Cap comes with pretty much all the necessary accessories. Chief among them is the shield. It’s got a nice heft, strong paint job and the metallic parts connect securely with the set of hands with magnets in them.

Cap has four sets of hands — one set of fists, a set of shield gripping hands, a shield tossing wide open set and slightly open hands to hold the helmet/mask piece. That separate helmet piece won’t actually fit over the unmasked head and is just intended to capture Cap right after he removes it. As far as accessories go, it’s a nice touch.

Hot Toys includes one extra set of hand pins, but as is the case with a lot of their figures, the hands don’t always want to come off the pegs all that easily. I’d love to see them just attach the hand pins to all the hands separately without the additional piece.

Switching the heads will prove tricky. The bottom neck piece likely won’t come off from the connecting joint on the figure meaning you’ll need to soak the alternate head in some hot water and remove that neck piece then line up the top portion of the head onto the bottom neck piece. Readjusting the turtleneck will be a bit frustrating and you’ll definitely appreciate having the function stick there. 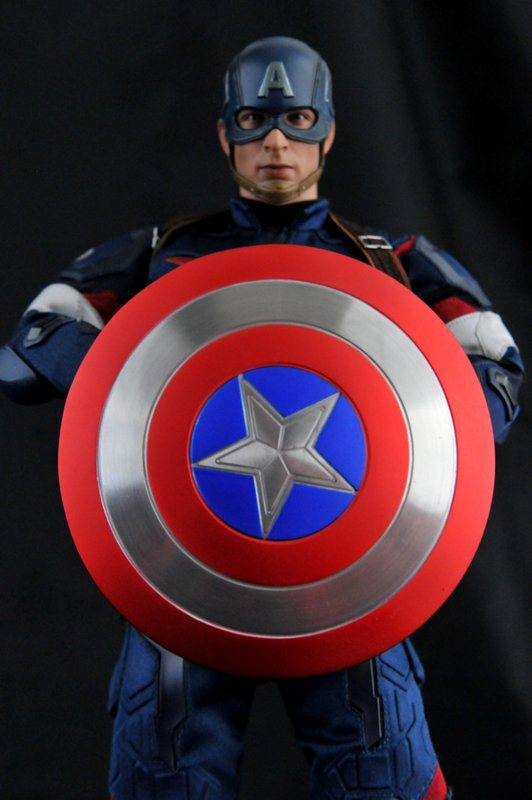 And as always, Hot Toys included a stand. This one has the Avengers logo on top and Cap’s name on the front. Hot Toys makes their figures fairly secure so it’s unlikely that you’ll actually need it, but it’s nice to have all the same.

Worth it? Hot Toys have steadily increased in price over the years. Where the average price was once $185, now the regular price will run you about $219.

) but you’re paying for a high-end quality figure and the quality is definitely here.

I’m Cap biased, but I’d been patiently awaiting another Avengers version for two years and this delivers exactly what I hoped with an excellent 12″ rendition of the Avengers’ boss.

Let’s face it, if you’re gonna get Age of Ultron figures you kinda have to get Cap, Thor and Iron Man since their looks are so drastically different from the first film. As one of the Avengers’ Big 3, Cap makes for an outstanding centerpiece of any Avengers display. 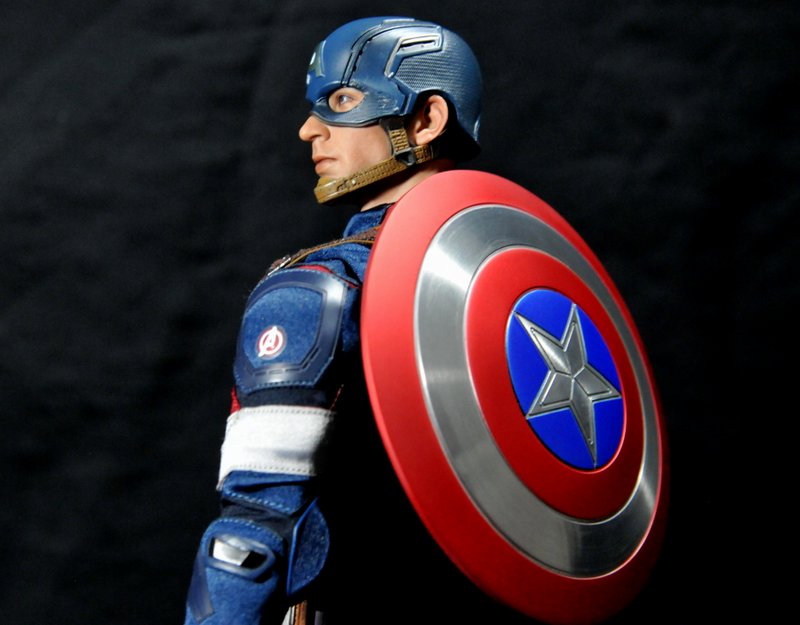 Where to get it? Like all Hot Toys figures you can scramble around online to find a good deal since he’s now sold out at Sideshow Collectibles. 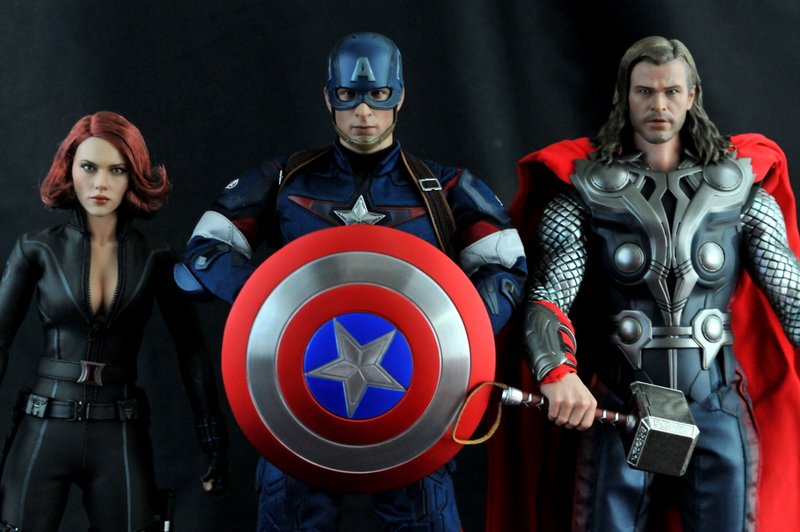