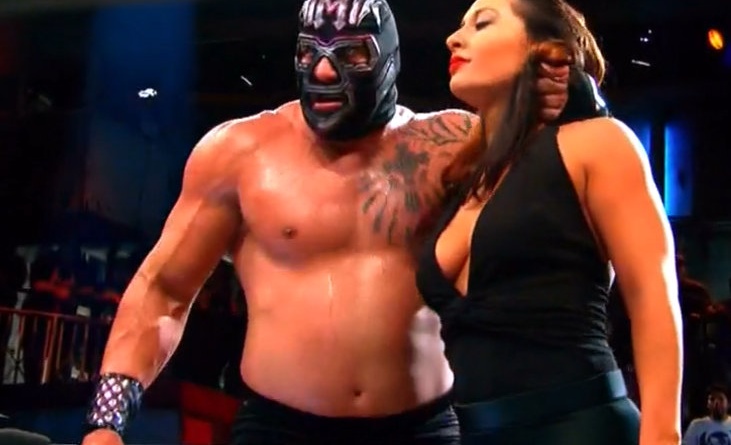 ‘Lucha Underground’ is building to its season finale — I may cry a million tears if it doesn’t return for a second season — and with a handful weeks left of the best wrestling on TV, the action at The Temple is heating up.

Matt Striker and Vampiro announce that Alberto El Patron will battle Johnny Mundo at Ultima Lucha. With a rematch of that classic and the bitter hatred of that feud, LU could sell Ultima Lucha on the strength of that match alone.

Before we get to the match, we cue an interview Vampiro conducted earlier with Superfly. Normally, I don’t like when the commentators mouth off too much to the wrestlers, but Vampiro’s character from Day 1 has been about calling it like it is and calling out luchadores.

Superfly is one of the more methodical luchadores and his heel turn has further slowed his offense down. Sexy Star takes her usual hellacious amount of punishment, but seems off a bit tonight as she misses two top rope dives. Superfly gets the win with a pair of powerbombs. Despite getting the win, Superfly tries to take Sexy’s mask much like she did when she defeated him earlier. The callbacks to previous matches and episodes really contribute to making each week a can’t miss occurrence.

Rating: 2 out of 5 Since this would seem to be Sexy Star’s final angle of the season, it makes sense for her to lose the initial match with heel Superfly. Unlike Sexy’s battles with Pentagon Jr., the fans could barely work themselves to caring too much about this feud. Have to figure the end game is Sexy’s mask against Superfly’s hair or LU career.

Mini-video of Drago twirling nunchucks along a sun-drenched rooftop for no apparent reason than to show off the cool visual.

The Mack vs. Cage vs. Angelico vs. Pentagon Jr. vs Marty ‘The Moth’ Martinez

Pentagon Jr. goes after Melissa Santos, who has remained leery of him since he first went after her nearly two months ago — you’ve gotta appreciate the continuity of the show. Pentagon Jr. says he could care less about the Aztec medallion as he was robbed of a better sacrifice to his master thanks to Vampiro. Vamp doesn’t want to revert to the dark places he’d have to go to take down Pentagon Jr., but this confrontation seems inevitable for Ultima Lucha. From not overdoing Vampiro’s in-ring involvement the fans are actually very excited about seeing him battle Pentagon, who leaves the Temple since he’s not getting a piece of Vampiro tonight. Striker goes solo for a bit while Vampiro tries to calm down, which is a brilliant touch to show how frustrated Vamp is with the situation. These little things are why LU is the best wrestling show on TV.

Playing off their incident from a couple weeks ago, Mack and Cage go at it. Mack continues to defy expectations of what a guy his size can do in the ring while Cage seems like Vince McMahon’s dream come to life. ‘The Moth’ shows some surprising agility as well. Mack kills Cage with a suplex on the ring apron and top rope splash onto the floor. Aerostar takes advantage of the one on one opportunity to hit his ring corner walk hurricarana and springboard dive to pick up the win.

Rating: 3.5 out of 5. With Jack Evans and Fenix as the holders of the Aztec medallions, you’ve gotta think we’re looking at some crazy spotfest like a ladder match or something for Ultima Lucha.

Our wacky Trios champions are trying to get on the same page as Son of Havoc is boxing with Ivelisse while Angelico tries to play peacemaker. Their bickering gets interrupted by Catrina, who could care less about invading Ivelisse’s personal space, and warns them that death is coming for them all as her Disciples of Death come up from behind them in a lightning storm (!?!?) and presumably lay them out. As the only other trios team now that The Crew has been wiped out, this seemed inevitable. The lightning CGI was WCW 1992-93 skit levels of goofy, but the end result should lead to a fun match.

Mil Muertes vs. Drago for the right to battle Prince Puma at Ultima Lucha

Before the match, Hernandez comes out to attack Drago seeking some measure of revenge for Drago defeating him, King Cuerno and Cage in the showdown to determine the No. 1 contender. Looks like we’ve got another match set for Ultima Lucha.

Muertes obliterated Fenix in Grave Consequences and in their Death Match rematch, he appeared to finish the job. Tonight, Drago stands in his way and gets battered, tossed and otherwise rag-dolled in another brutal display of Muertes destroying anyone in his path. Among his beatdown, Muertes tosses Drago into the front row and lays him out with one of the most impressive spears I’ve seen in years. Drago gets a brief moment of hope as he’s able to lure Muertes into the dragon’s lair, but Muertes just powers out and gets mad finally hitting the Flatliner for the win.

As Mil and Catrina pose and look all threatening, Prince Puma comes out with Konnan in tow. Puma is game for a face to face confrontation, but Konnan uses his cane to keep Puma at bay.

Rating: 3.5 out of 5 This wasn’t so much a match, but another showcase of the unstoppable force that is Muertes. And unless he’s able to secure one of Dario’s magic medallions, it seems doubtful that even Prince Puma can stop him.

Moreso than ever, ‘Lucha Underground’ is resembling its competitors as the storylines focus in on an epic show, but it remains the one weekly wrestling show you can’t miss for its unique spin on setting the stage for a major pay-per-view quality event.