Ever since he cut ties with the Four Horsemen, Lex Luger has been one of my all-time favorites so I was ecstatic that Mattel was giving him the Flashback treatment with Elite wave 30. Is this figure the total package or does Mattel need another try to get it right? Let’s find out!

Packaging: Mattel Elite figures have some of the best packaging on shelves today. While I’m a bit partial to the current Elite packaging, the Elite 30 had a more personalized bio. There’s still a lot of space in the back, which would allow for the stats and match attire reference info. The perfect Elite back will feature a hybrid of both to create the ultimate package. All of the pictures on the package depict Lex with a shorter hairstyle (more on that later), which may be a bit confusing to some folks wondering why the hair doesn’t match the picture. I’m wondering if Mattel didn’t have access to promotional pictures from WWE with the longer hair.

Likeness: This is one of Mattel’s better headsculpts and perfectly captures Luger in his smiling USA patriot days. Smiles almost NEVER work, but this time Mattel was able to get Lex down perfectly. 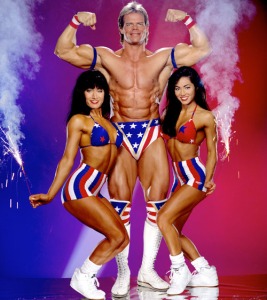 On the Wfigs boards, Mattel WWE designer Bill Miekina polled members to gauge their most demanded look for Luger and the Made in the USA version was the runaway favorite over NWA Four Horsemen, Narcissist and Wolfpac versions of Luger.

Miekina looked out for old school NWA fans though by giving Luger a longer hairstyle from the end of his WWF stint so you can easily customize a WCW/NWA era Luger as well. I bought two for that reason alone although I’m not sure if I want a black tights/white boots combo or one from his more colorful 1988-1991 era. Decisions decisions.

For those preferring an earlier edition Made in the USA Luger, Mattel almost seemed to make a ‘cut here’ line on the hairline so you can have a shorter hair Luger. While it’s not quite as good as two separate heads, this is easily the best we could have hoped for out of one.

Paint: Luger’s complicated USA paint scheme pretty much made him a no-go for all but the most professional customizers so if for no other reason, the USA attire was the best gimmick choice and Mattel nailed it. My two figures both featured mostly clean paintjobs on the stars and stripes on the tights, wrist tape and the kneepads.

Minor nitpick — it would have been nice to get the arm bands as separate pieces rather than simply being painted on. The pieces are available from any number of John Cena figures so it was a curious omission.

Luger pretty much has always had much darker temples, but his hair has a fairly consistent tone. There’s a bit of a wash there, but if you’re a stickler for accuracy, adding some black or very dark brown may be something you’ll want to add.

Scale: Luger was 6’4″ and Bret Hart was billed at 6’1″ so that’s about right. I do wish Mattel had gotten the scale right on Yokozuna so he wouldn’t be taller than Luger, but he’s appropriately shorter than The Undertaker and Kevin Nash and taller than Bret Hart and Shawn Michaels.

Articulation: Luger has the standard Elite articulation and there’s not a ton of moves you won’t be able to simulate with him with ease. The only one I couldn’t manage for posing sake was bodyslamming Yokozuna, which had more to do with the girth of the Yokozuna figure more than any failing on Luger’s part.

My figures both had nice tight joints, which should be a given, but isn’t always the case.

Accessories: Luger comes with two dumbbells similar to this promotional picture. While the weights are a solid accessory, especially if you want to do a weight lighting diorama, they’re not nearly as essential to Luger as the American flag, which could have been reused from the Legends Hacksaw Jim Duggan.

If you’re like me, you’ve got Duggan already so it’s a moot point. For a more useful dedicated accessory, I would have loved to have seen Mattel go with Luger’s ring jacket. Cloth of course.

Worth it? Mattel has focused a lot of their flashback attention on the mid 80s era and the Attitude Era with only an occasional entry from the New Generation time frame. As such, Luger doesn’t have a whole lot of opponents to square off against — once again reinforcing the need for Mattel to focus more on the mid 90s heels like Crush, Tatanka, IRS, King Mabel and Sid.

Ironically, I found more immediate value in turning the figure into an NWA/WCW version that could team with the Four Horsemen from the Hall of Fame boxset or alongside Dusty Rhodes and The Road Warriors to battle them. He’s definitely worth the investment though either way and it’s great having another NWA/WCW legend in the collection. Now we just need a Nikita Koloff and we can do War Games!

Where you can get it? Luger is just starting to get hard to find now and you can pretty much abandon any hope of finding him at retail. You can shop around, but it looks like site partner Amazon.com WWE Elite Collection Series #30 Lex Luger Figure

has it for the best price short of getting lucky on eBay.

I definitely recommend getting him sooner though considering how quickly the price of WWE Elites, Flashbacks in particular, soar on the secondary market.