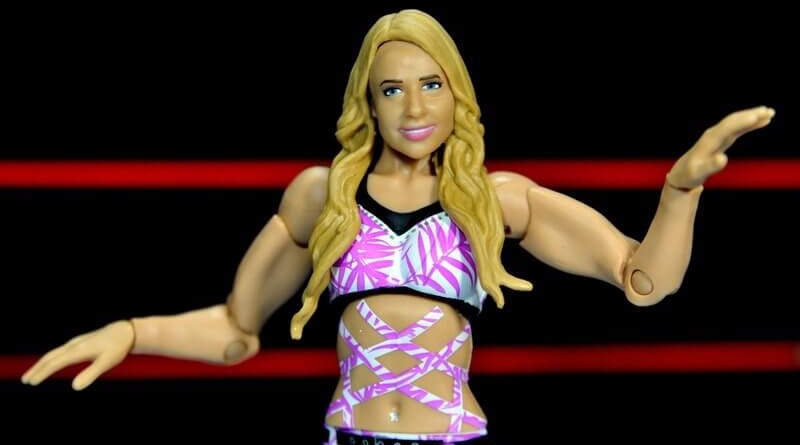 After picking up the Elite 34 Paige, I knew I needed to fortify my Divas ranks. Not long after that revelation, I stumbled onto the Mattel Basic Series 30 Emma and quickly grabbed her for the collection. Emma proved to be a lot more frustrating than her fellow NXT Diva, but let’s see how she stacks up.

Packaging: The Basic packaging is simple and straight to the point. Since the figures retail for $11, we get a static pose with no rubber bands or other constricting elements. I’d love to get just a little personalization though beyond a large portrait of the respective wrestlers on the back.

Likeness: Emma isn’t the flashiest of Divas and isn’t pushed to the forefront like a major star of the division based on her looks alone, but she’s easily one of the more attractive Divas on the roster. For the most part, Mattel did a great job with her likeness. The hairpiece could probably be a bit lower to not make her forehead so prominent, but this is an excellent representation of Emma.

I wasn’t sure where to gripe about this, but by far my biggest issue with the figure is the lower leg piece. In a terribly cheap move, Mattel re-used a pants leg mold painted to match Emma’s skin tone. It looks awful as the folds and creases make Emma appear like her legs are from a 70-year-old woman.

This is the kind of inexcusable lack of care to the product that continually plagued previous WWE license-holder Jakks. I praise Mattel for its efforts in going above and beyond Jakks’ typical handling of the line, but Mattel seriously dropped the ball here and it’s pretty shameful that this figure got approved in this condition. 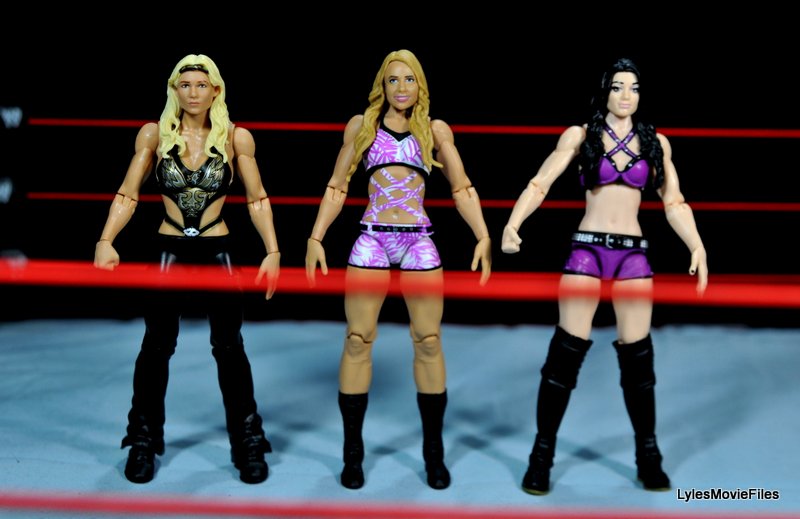 Scale: Emma is billed at 5’5″ compared to the 5’8″ Paige, but as you can see the figures are the same height. Mattel doesn’t seem to care as much about the Divas scale as the all largely use the same body. The WWE frequently treats the Divas division as second-rate and it’s disappointing Mattel has the same attitude.

Paint: I’ll start off with the negative. Even in her early days of palling around with Santino, Emma had some highlights in her hair so the molded plastic one-tone looks way off.

On the positive, Mattel did a fantastic job with Emma’s outfit, getting the intricate leaf-like design and sports bra underneath just right. It’s one of the best attire translations we’ve seen in the line so far.

Articulation: I had some challenges getting Paige to hit all of her moves and Emma was no different. Posing wise, the lack of double-knee articulation means you won’t ever get a satisfactory Emma-lock. Ditto for Emma’s version of the Tarantula. Worse off, it draws more attention to the lower leg creases.

The oversized slappy ‘man’ hands used on every Diva is actually useful here in getting Emma in her trademark pose. She’ll look excellent on your display in that regard, but beyond that, the hands prove just as worthless as ever. The slap hands always look out of proportion so hopefully Mattel will ditch them moving forward and start going with fists for the Diva figures. 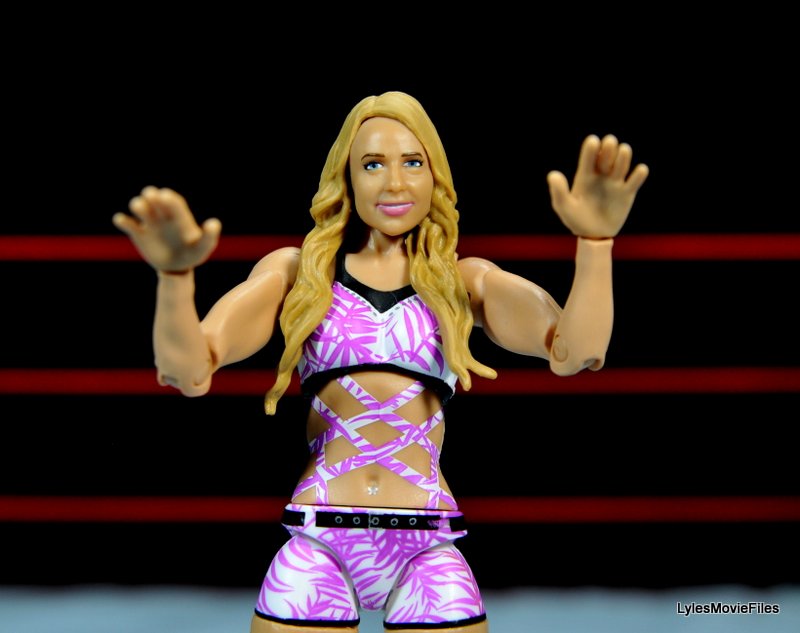 The longer hair is made of a soft enough plastic so it doesn’t restrict any movement, which is especially helpful. Emma can handle most moves with some assistance, but it’s a bit frustrating that you’ll have to settle in capturing most of her signature moves.

Mattel needs to go back to the drawing board with the Divas articulation. It worked OK back in the more model than wrestler era (with apologies to Natalya), but the body sorely needs better engineering with a deeper mid-chest joint and double knees. Considering the NXT infusion of quality talent like Charlotte, Sasha Banks, Becky Lynch and Bayley is imminent, Mattel needs to make the fixes now instead of having a deficient Divas body mold.

Accessories: As a Basic figure, Emma gets nothing in this category. It doesn’t hurt her as that’s the norm for the series and Emma comes out to ringside just as accessory-free so it’s not like we can complain about Emma missing anything. Emma does wear kneepads though and the bulk of the leg creases wouldn’t be as noticeable if they were included.

Worth it? This is a real tough one. Emma’s been sent back to NXT, which is great in terms of allowing her to showcase her talent, but it might push her down the priority list in terms of getting another figure. The inclusion of NXT Diva Charlotte into the Basic line is encouraging though so maybe we can get another crack at Emma.

If you’re a fan of Emma, this is your only option right now. Keeping that in mind, get her if you find her and then start figuring out ways to improve her starting with better legs and hands. 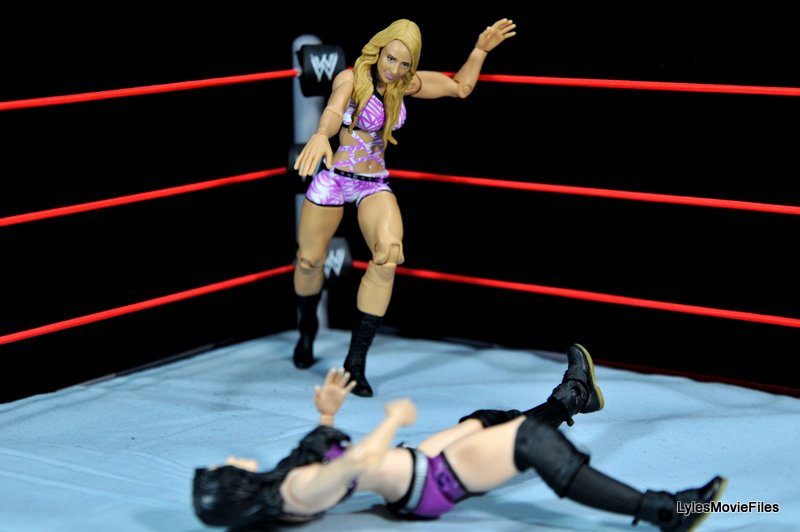 Where to get it? Divas are normally packed 1 in every other case so when you find one, you might want to play your lottery numbers too. The best bet remains site partner Target, which currently has a Black Friday in July sale going where you can save up to 50% on Toys

Also, you could grab her from Lyles Movie Files site partner Amazon.com, which will kick back a portion of your proceeds to help us improve the site. WWE Basic Figure Series #30 Emma Action Figure