Beyond its unwieldy title, Heroes of World Class: The Story of the Von Erichs and the Rise and Fall of World Class Championship Wrestling, is a riveting and emotional glimpse at one of wrestling’s greatest and tragic dynasties. More than just a fan service project, the documentary provides an insightful look back at wrestling before it became the glitzy family friendly sports entertainment spectacle it is today.

Through interviews with WCCW legends such as commentators Bill Mercer and Marc Lowrance, booker/manager Gary Hart, manager Skandar Akbar, referee David Manning and WCCW TV producer Mickey Grant, director Brian Harrison tells the story of a small NWA territory that became the model for its contemporaries in the early 1980s.

As a cog in the National Wrestling Alliance, World Class kept its base of operations in the Texas territory.

Owner/star wrestler Fritz Von Erich was looking for the next big thing to set the territory ablaze and as fortune would have it, found not one or two, but three lynchpins to build around in his sons Kevin, David and Kerry at the soon to be world famous Sportatorium.

Harrison details how World Class emerged as the wrestling hotbed from 1982-1984 thanks to the Von Erichs, The Freebirds and Chris Adams; the cutting edge presentation of the TV shows and its TV syndication deal.

Sadly so many of the cornerstones of the promotion are dead — many at shockingly young ages from suicide, overdoses, murder and from years traveling on the road in an unforgiving sport. Longtime fans will likely be disappointed at the lack of interviews from retired stars like ‘Gorgeous’ Jimmy Garvin and Iceman King Parsons. The most glaring absence is Michael Hayes, but his commitments to the WWE likely prevented his involvement. Fortunately, Harrison was able to spend a significant amount of time with Kevin Von Erich, the sole surviving member of the Von Erich family.

Mercer and Grant especially seem to relish the trip down memory lane. Their portions prove especially informative as Mercer has a razor sharp recollection of major events and accomplishments of the fledgling promotion. Grant was a pioneer in regards to his presentation of wrestling on TV, with some of his fingerprints (entrance music, tight camera angles) still being utilized with today’s product.

Without the need to be protective of anyone’s feelings, the interview subjects are refreshingly candid, which is especially beneficial when discussing the problems that led to the promotion’s demise.

This is one of the rare pre-WWF expansion stories that doesn’t make Vince McMahon the bad guy for seeing the opportunities to expand his brand and driving the other territories out of business. Instead, the interviewees cite Fritz Von Erich’s refusal and inability to get with the times as one of the main reasons for World Class’ growth stunting.[irp]

From a technical standpoint, it’s not that surprising to learn this is Harrison’s first documentary. Some of the interviews are shot in locations not especially conducive to dialogue heavy segments such as a backyard on a windy day.

The clips are occasionally awkwardly cued, transitions are frequently poorly edited and some of the music selections aren’t all that effective in complimenting the story. While ‘Heroes’ clearly doesn’t have the funding of a big-budget production, this is one of those cases where the stories are so compelling that the flaws aren’t nearly as important.

It’d prove nearly impossible to watch this and not come away with an unceasing amount of respect for Kevin Von Erich, who handles the tragic cards he’s been dealt with a remarkable amount of grace and perspective. In a fitting final act, Kevin Von Erich reminisces as he goes through one last tour of the Sportatorium before its demolition. Though the second half is filled with tragedy after tragedy, the documentary ends on a hopeful optimistic note as Von Erich looks to the next generation of his family’s involvement in the profession.

For wrestling fans weened on Hulk Hogan, Stone Cold Steve Austin and John Cena, this is essential viewing to see how the landscape was shaped and the stories behind some of the legendary figures behind wrestling history. 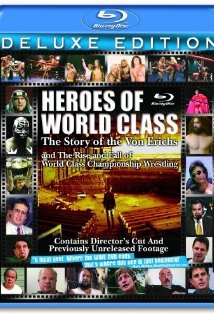 Catch some of the Von Erich’s matches on the WWE Network: Subscribe to WWE Network and Get Your First Month Free for Unlimited Access to Exclusive Programming & All Special Events!

0 thoughts on “Heroes of World Class: The Story of the Von Erichs and the Rise and Fall of World Class Championship Wrestling review”