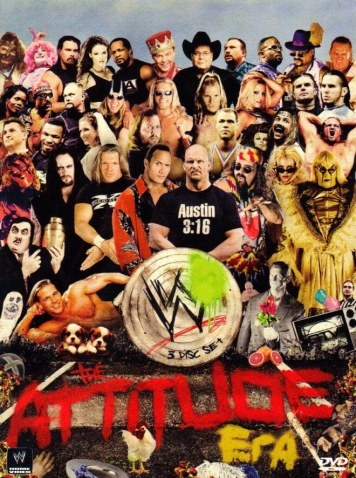 San Diego Comic Con is right around the corner as preview night is tonight. One of my favorite parts of the big show is all the reveals of the 2015-2016 toy season. Mattel has brought the greatness with its WWE Flashback line honoring stars of yesteryear and it’s running neck and neck with Marvel Legends for my favorite line to collect these days. Mattel has managed to sneakily get more legends into the line with its Hall of Fame subset, which allows Mattel to go back and do some much needed variant looks for legends with extensive careers and multiple gimmicks. Earlier, I covered my top picks for figures I’m hoping to see for SDCC, but this time I’m gonna narrow it down a bit to a specific timeframe. The crazy anarchy rules days of reckless abandon, beer baths, smackdowns, Mr. Socko, handprint pasties and two words for ya commonly referred to as The Attitude Era. Keep in mind this is just for Attitude Era variants so essential characters who haven’t gotten their first figure like Ken Shamrock, D-Lo Brown and Val Venis and outcasts like Kurt Angle, The Hardy Boyz and Jeff Jarrett won’t make the cut. But there’s some very necessary figures left. I’ll break down my choices and you can tell me if you agree or who you’d put in their place.

This may be a tricky one since WWE tries to act like Shawn Michaels and Triple H were alone in forming Degeneration X in 1997, ignoring Chyna and HBK’s insurance policy.

With Rude unable to wrestle thanks to a career ending neck injury, he returned to WWF as a suit wearing, briefcase toting backup for Michaels. Since suit clad figures aren’t an easy sell, Mattel may be able to sneak this figure into a Battle Pack with a HBK or Curt Hennig figure and the briefcase can be the accessory.

The Elite 33 X-Pac was a solid take on the man formerly known as Syxx, but I’d totally be up for seeing X-Pac in his early DX attire with the red and black outfit. And since some folks weren’t a fan, Mattel can ditch the tongue out scan and give us a rare straight-faced X-Pac. He’s lower on my priority list to revisit since the first figure was so well done, but Mattel could take the opportunity to scale X-Pac down a bit as the broad shoulders on the initial version made him appear as big as Triple H. Which definitely isn’t best for business.

Mattel has just about covered all the major personas in Mick Foley’s career, but we’ve yet to hear any news of one of my favorites — the cheap pop earning Commissioner Foley. Before the GM/matchmaker gimmick got overused, Foley was a welcome change of pace from The McMahons as he made the heels lives miserable. It’d also help stand out on the shelf with a buzz cut Foley. Give him a cloth flannel shirt and book accessory and we’re all set.

Pimping ain’t easy but getting a figure of this controversial character may prove a lot more challenging. Jakks made a crappy version for its Classic Superstar line and since we already have a Mattel Papa Shango it’s fitting to get another of Charles White’s identities.

Since the obvious ho accessories won’t fly — looks like some of the Divas will be pulling double duty — give him his chain, hat and a cloth vest. 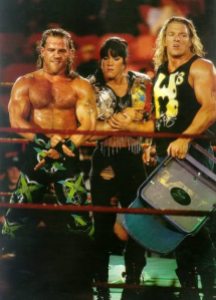 The icon, the showstopper, the main event was in his world in December 1997 having seen his hated rival Bret Hart depart for WCW after Michaels, Triple H and Vince McMahon conspired to put the title on HBK. In his first title defense, Michaels debuted one of his most popular attires — a Degeneration X spin on his standard gear. Mattel delivered a fantastic figure on his Wrestlemania 14 attire only future whetting fans’ appetite as to what a DX In Your House version would look like. This just narrowly misses the Top 5 as the other selections were more pivotal and involved during the Attitude Era than HBK.

Before he became the growling dominating World’s Strongest Man as smoothly as his menacing bald head, Mark Henry was the final recruit for The Nation of Domination.

Henry doesn’t need a lot of accessories, but this would be the absolute perfect time to revisit the Elite 5 Jack Swagger gimmick of including a removable cloth singlet to go over the painted one. This way, we could include a removable post-Nation blue Sexual Chocolate singlet and have a painted Nation singlet for the best of Henry’s Attitude Era worlds!

Bossman was an unexpected Attitude Era success story. Following a long run in the WWF as one of Hulk Hogan’s major rivals in the late 80s, Bossman traveled to WCW where he toiled in various midcard feuds before getting a background role in the n.W.o by virtue of his WWF tenure. Opting to leave in early 98, Bossman returned to the WWF in a major role as Mr. McMahon’s bodyguard.

From there he would play a pivotal role in the Austin/McMahon war as a founding member of The Corporation where he would see his biggest WWF success as a joint Hardcore champion and tag team champion. Bossman also holds the distinction of being one of the few Attitude Era stars to pin The Rock. His second Mattel figure should feature a slightly slimmed down body making use of one of The Shield’s vests and hopefully a Hardcore title. 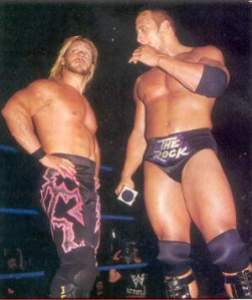 I’m amazed we haven’t gotten this version of Y2J yet, but as more of his higher midcard opponents like Rikishi, Eddie Gurerro, Road Dog, X-Pac have joined the Mattel ranks — not to mention The Rock and Stone Cold Steve Austin — we desperately need a 1999-2001 Y2J for our collection. Give him one of those rounded Intercontinental titles and we’ll have the essential Attitude Era Jericho. Some people really want to see that Wrestlemania 18 attire where Jericho as the undisputed champ was a background player to the Triple H/Stephanie McMahon feud and I’d rather have a figure where Jericho was a fast rising superstar in WWE-land instead.

One of Mattel’s best figures remains its one and only SDCC exclusive Ministry version of The Dead Man. And while Mattel has done a great job cranking out Undertaker figures, the most glaring absence is from his pre- to early Attitude Era days when he faced stars like Steve Austin, Bret Hart, Shawn Michaels, Sid and Kane. I’m stunned, shocked and a little bit impatient waiting this attire as it’s the last major character (apologies to Ken Shamrock) for the 1998 roster — arguably the most exciting and entertaining year in WWE history. Undertaker still has the long-haired American Bad A$$ version so it’s not like Mattel would run out of options for The Dead Man, but it’s way past time to get Taker’s signature mid-90s attire.

To quote ‘Mission: Impossible II’s’ Dr. Nerkovah, ‘Every search for a hero must begin with something which every hero requires, a villain.’ With Stone Cold winding down his feud with Mr. McMahon and The Rock firmly on the side of the Angels following his split with The Corporation, the WWF needed a new main heel. Enter Triple H, who before he became frustratingly protective of his spot from 2002-2005, was perfect in the role.

Mattel’s given us a number of Triple H figures — including a very underwhelming Defining Moments figure, but we need one from his 2000 prime where he was retiring Mick Foley and becoming the first heel to successfully defend his title at Wrestlemania. Give him his trusty sledgehammer and a water bottle and we’ll have the ideal version of The Game.