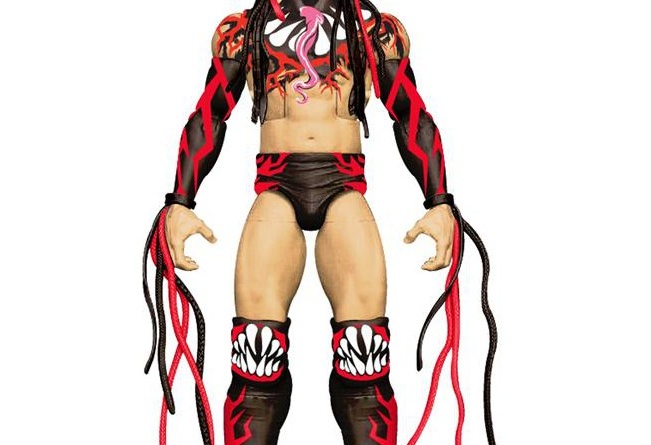 Mattel revealed its upcoming slate of WWE figures and rather than randomly posting my thoughts on them, I figured I’d break them all down at once.

I don’t get that many modern figures, so this will be short. On the noteworthy Basics front, but there’s a nice Sting circa 1999 and Tyson Kidd coming.

The Bellas and Naomi get updated figures. The Bellas come in a Battle Pack meaning we’ll have a slightly better than average chance of finding them in stores. J & J Security also get put into an outstanding looking Battle Pack so by the end of the year we’ll have a full roster of The Authority.

On the Elite front, the Stephanie McMahon Elite 37 figure was revealed. It’s a lot more intricate than most Divas outfits even if the articulation will be limited. We’re getting updated Elites of Brock Lesnar, John Cena, The Miz and Roman Reigns, who has yet to have a perfect headsculpt. On the other hand, the Elite 38 Daniel Bryan looks phenomenal with an incredible likeness. Another solid looking figure was the Adam Rose. All that’s missing was the furry coat and Bunny.

Best Reveal: Seth Cashes In. The next Toys R Us exclusive features the big moment from Wrestlemania 31. There’s nothing to complain about this figure from an excellent translation of Seth’s post-Shield attire, the Money in the Bank briefcase and the world title, this is a solid exclusive.

Worst Reveal: John Cena flashback from his Smackdown debut. The attire is appropriate and comes with a world and US title belt, but the head sculpt is far too modern to remotely pass as a young Cena. If that gets fixed (which is very doubtful) the figure would be worth a purchase, but I’ll assume this is one I’ll be skipping.

Comic Con was a great day for NXT fans.The highlight of course was the three different versions of current champ Finn Balor with the first NXT Elite figure of Balor in his Demon getup. There was also two Basics — one a wrestling version and the other in the T-shirt series. Balor is clearly being positioned as a major star both in NXT and WWE so this should be the first of many. I’m wondering if this isn’t my chance to make a Bullet Club era Prince Devitt now?

In addition to Balor, we saw the second NXT Elite figure — Sami Zayn, who will be coming with the NXT title.

Basics will still remain the main way to stock your NXT roster with reveals of Hideo Itami and Charlotte. Mattel revealed Basic Battlepacks of The Ascension and they looked great. Hopefully, we’ll see Elite versions sooner than later.

Also announced with a rendering was everyone’s favorite huggable Diva Bayley. Curiously at least for Day 1, there was no Sasha Banks reveal, which is probably the only disappointment for NXT fans. Kalisto of the Lucha Dragons was revealed without a matching Sin Cara so hopefully whatever attire Kalisto has it matches an existing Sin Cara. He’s one I hope we get a fast track Elite as a Basic figure of one of the promotion’s most agile stars is kind of worthless.

Kevin Owens is still at the rendering stage, but hopefully Mattel will make sure to untuck his shirt to be more accurate to how he wrestles. As Owens is getting fast-tracked in the WWE main roster, we should expect many more Owens figures including an Elite mid-2016.

Still, short of Cass, Enzo and Blake & Murphy, the main players in NXT will be on our shelves by this time next year. Not bad for the development brand.

Best Reveal: Elite Balor of course. He’s a perfect character to kick off NXT’s arrival into the Elite line.

Worst Reveal: The lack of The Boss.

It was a bit of a mixed bag for legends collectors as the bulk of the offerings revealed were squarely focused on the Monday Night Wars Era. The reveals were Bradshaw and Farooq in APA attire, The Godfather [so we got one from my Top 10 Attitude Era list!] WCW era ‘Macho Man’ Randy Savage, a Ringside Exclusive Scott Hall and Hollywood Hogan. Farooq needs to be about two shades lighter, but otherwise the APA looks great. I hate the choice of a Hollywood Black and White attire for Hall as white oozing ‘blood’ isn’t nearly as cool as the original red. Hopefully we get an early Outsiders appearance complete with a new head sculpt.

On the 80s/90s front, there wasn’t nearly as much to get excited about just from a limited amount of offerings. A much-needed Jimmy Hart was revealed, but that also kinda drew attention to the absence of a Bobby ‘The Brain’ Heenan figure as of yet. We finally get an Elite style Ted DiBiase complete with Million Dollar belt. A much-demanded British Bulldog circa 1992 was also shown, but my highlight was a Great American Bash 1990 Sting. There’s some issues — the gritted teeth expression, the plastic jacket and incorrect boots, but it’s a 1990 Sting!

Best Reveal: Sting! Now we only need about 20 more from the Surfer Sting era.

Worst Reveal: The long anticipated fourth Defining Moment is just a re-release of Mattel’s only SDCC exclusive The Ministry Undertaker. It’s a great figure and sucks for those who missed it originally, but the figure sold so poorly for Mattel that it dropped future SDCC exclusives.