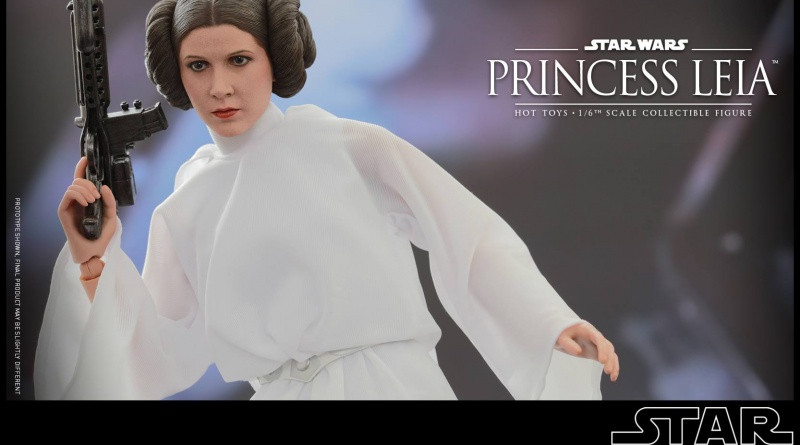 Hot Toys has certainly not hidden its Star Wars agenda with its 12″ line. The styles and characters from ‘Episode IV: A New Hope’ have been the priority as we’re nearing the end of the principal characters from the film that started it all. I’m still hoping Moff Tarkin is included before Hot Toys moves on to ‘Empire Strikes Back‘ see also the greatest movie ever made ;-)

Leia is a bit light on accessories — I’d love to have seen her come with the Death Star plans she gives to R2.

“Help me, Obi-Wan Kenobi. You’re my only hope.” – Princess Leia

The brave and strong-willed Princess Leia is a beloved character in the original Star Wars trilogy. Her important role in leading the rebellion against the Galactic Empire is unforgettable to any Star Wars fans! Following the introduction of the Hot Toys Luke Skywalker 1/6th scale Collectible Figure, today we are excited to officially present his twin sister, the Princess Leia 1/6th scale Collectible Figure from Star Wars: Episode IV A New Hope!

The movie-accurate collectible figure is specially crafted based on the image of Carrier Fisher as Princess Leia in the film featuring a newly developed head sculpt, detailed hair sculpture of Princess Leia’s iconic hair style, specially tailored costume, two types of blasters, and a figure stand.

A special edition is available in selected markets which include a specially designed backdrop as bonus accessory.

Fans don’t miss the chance to pre-order this wonderful collectible figure to your Star Wars collection!