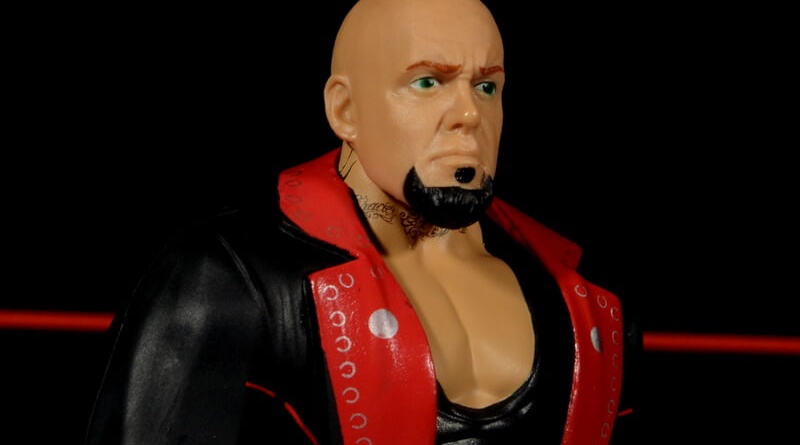 It took me awhile to get into The Undertaker. Starting off battling Dusty Rhodes and Hulk Hogan didn’t exactly endear me to the Deadman early on in his WWF stint.

Over the years, his consistency, durability and dedication to the WWE won me over. It didn’t hurt that Taker was having classic matches with the likes of Edge, Batista, Randy Orton and of course Shawn Michaels at an age when most of his peers had long retired. 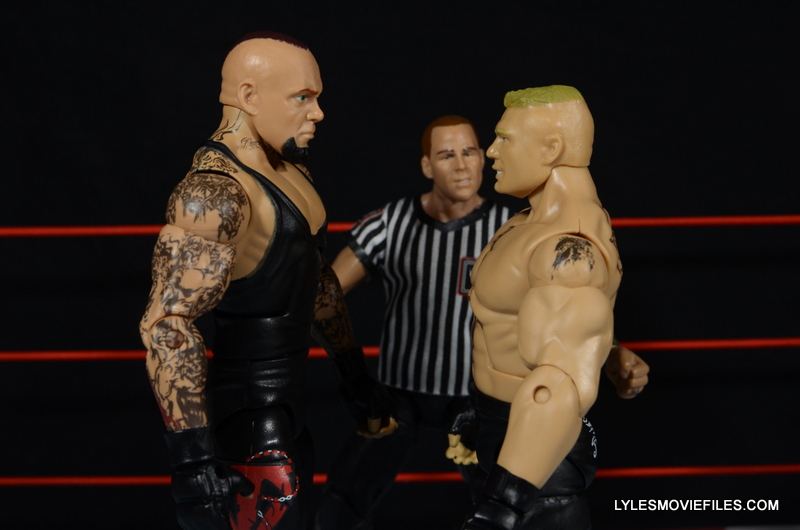 The one sticking thing was the Wrestlemania Streak. I remain adamant that Orton should have ended The Streak to fully cement his Legend Killer gimmick back at Wrestlemania 21. From there, The Streak seemed like it was just something to keep going and never actually end. So it was one of the last few legitimate shocks in wrestling when Brock Lesnar defeated The Undertaker to end The Streak last year at Wrestlemania 30. As evidenced by Undertaker’s shocking return at Battleground, he hasn’t forgotten it either.

As part of its Toys R Us exclusive Wrestlemania 30 wave, Undertaker was a no-brainer, but let’s see if his figure comes alive or should stay in the figure graveyard.

Package: Of the numerous WWE Mattel lines, my favorite is the Defining Moments packaging, but the special BAF set is pretty impressive as well. Adapting the yellow and purple colors of the Mardi Gras theme Wrestlemania 30 — complete with fleur-de-lis on the side, this packaging definitely stands out among the blue and grey of the standard Elite packaging. 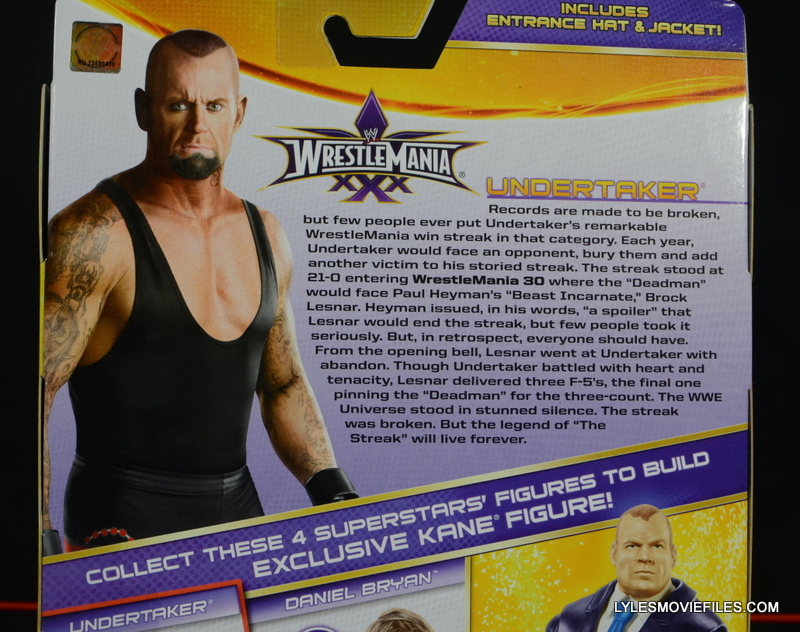 We get a nice large portrait of Undertaker and a helpful indicator as to which BAF piece comes with the figure. The bio is nicely detailed fully explaining the importance of this particular attire while the back also breaks down all the figures you’ll need to build Corporate Kane.

Likeness: Mattel typically only gets the Wrestlemania figure for its nearly annual Undertaker figure so it’s important they get it right.

Taker’s ill-advised mohawk is captured correctly, but his beard isn’t as full as Undertaker wore at it the show. That’s as big a nitpick as I can come up with her as otherwise the figure has a sensational likeness with The Dead Man.

Paint: With a tiny exception, the paintwork on the WWE’s Phenom is pheno… pretty great. I’m not nearly that hardcore an Undertaker fan to tell you if all the tattoos match up correctly, but the arms are sufficiently tatted up for the casual observer.

The logos on the side of his tights have a strong red that pops and helps make this stand out a bit more from other similar attired Undertakers.

For my minor gripe. The gloves are a separate piece, but since the glove sockets aren’t flush against the lower arm portion (more on that later), there’s a noticeable gap where the flesh tones are prominent. 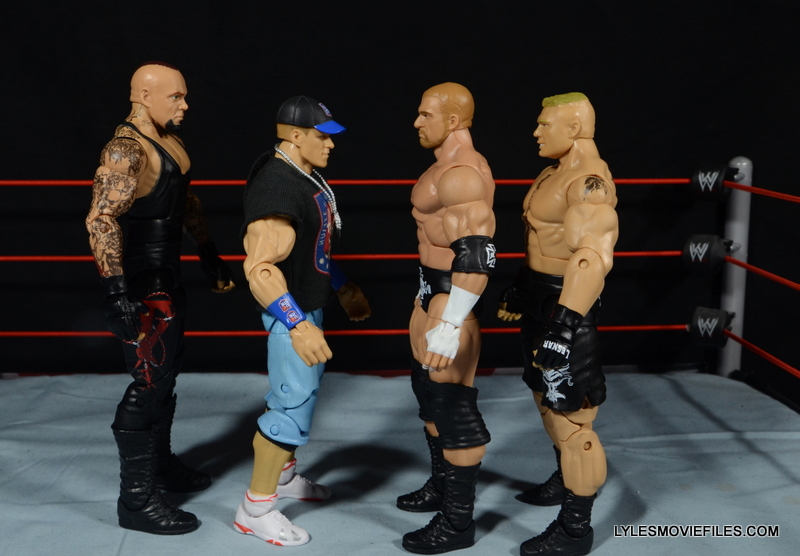 Scale: Undertaker is billed at 6’10″ and Brock is 6’3″ and you can definitely appreciate that Brock is not nearly the same height as Undertaker.Their height difference would be even more accurate if Undertaker’s neck peg wasn’t so short, which I’ll get further in detail on the next segment.

Articulation: Undertaker gets the full bells and whistles Elite articulation of full shoulder, arm, waist, mid-torso, hip, thigh, knee, boot and ankle articulation. You won’t have a problem simulating the tombstone although my figure did have a pair of annoying issues.

The first is one I hadn’t encountered with Elites before. The glove hand joints are smaller than the lower arm socket, resulting a severely limp-wrist Undertaker. If this is a common problem with the wave you’ll definitely need to break out the super glue to make them stay in more securely. 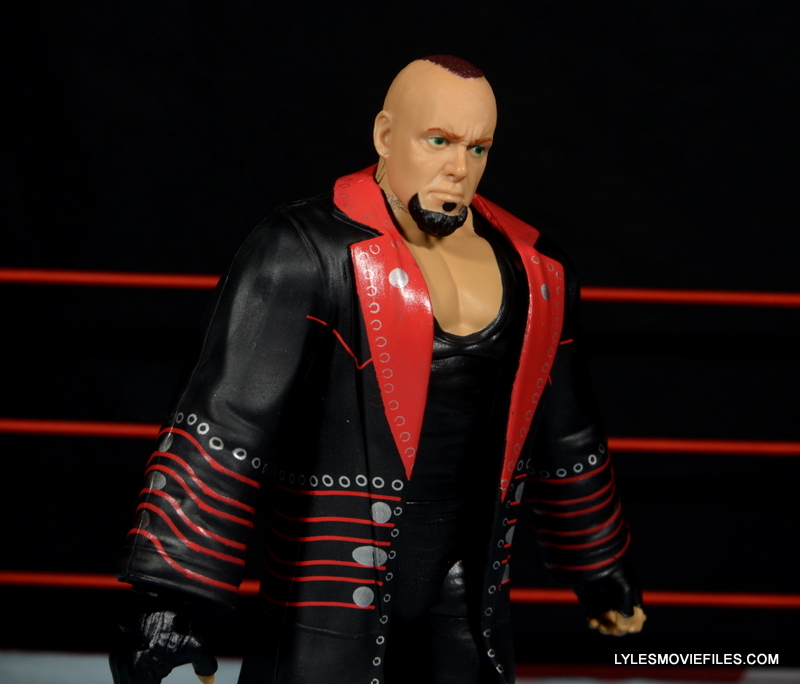 The other issue, which I’m sure you’ve noticed throughout the pics, is the lack of a neck. Undertaker’s neck pin sits too low on the shoulders giving him the no-neck appearance. I’m hoping a little tissue or cotton will help raise it up enough as well as showing off Taker’s lower neck tattoos.

Accessories: Taker comes with his trusty leather jacket and hat with special Wrestlemania red and silver accents. Mattel insists that getting this level of detail on a cloth jacket would be a major challenge, but I have my doubts.

Collectors however will find the most frustrating challenge putting on and removing the jacket. Compared to the Defining Moments Sting figure with a leather-like jacket, Taker’s is a pain.

Additionally, as part of the WM30 line like the WM30 Daniel Bryan, Taker comes with a BAF piece — his “brother” Kane’s head, which you can assemble to make Corporate Kane.

Worth it: I wasn’t a big fan of mohaw-Taker, but I did like the snazzy jacket and the red accents. With some fix-ups this figure will be much improved, but for $25, it’s annoying to have to make so many adjustments right off the bat.

If you want Corporate Kane, the figure has additional value even if Undertaker and Bryan are the two that provide a better value than the Cena and Bray Wyatt repaints. 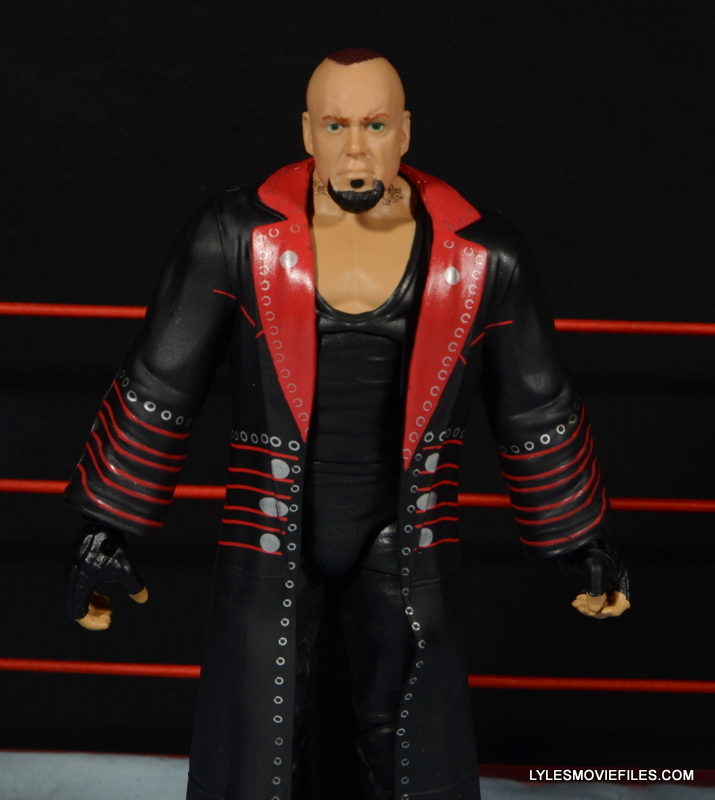 The weak hands, no-neck and the same troublesome plastic jacket makes this version of Undertaker strictly one for fans or figure historians who want to capture one of the most significant moments in WWE history in figure form.

Where to get it: The Wrestlemania 30 set is a Toys R Us exclusive so you’ll need a little luck to track them down. The day I got mine I saw a couple at Toys R Us Express in a mall so make sure to check them out.

If you can’t get to a TRU, your next option is to head online. It’s not the best price, but you can find some sellers on amazon: WWE Wrestling Wrestlemania 30 Elite Collection Undertaker Action Figure