I’ve been a wrestling fan literally as long as I can remember. For ‘Inside Out‘ fans wrestling is embedded as a core memory — one that’s provided decades of great moments in my life.

But sometimes like the same week I heard disappointing news about Ric Flair and Hulk Hogan regarding blacks, it’s hard not to think that a key aspect of my childhood (and adulthood) has been irrevocably damaged over something so stupid as the color of one’s skin.

My parents, family and friends helped instill in me a firm color blindness of which I’m forever grateful, but it still felt pretty special watching Ron Simmons and Butch Reed (with manager Teddy Long) defeating the vaunted Steiner Bros. to become the first black NWA tag team champions in 1990. 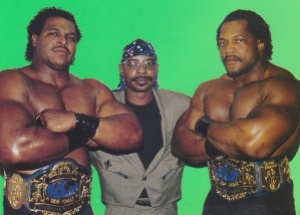 It was cool seeing guys who looked like me as champions something I hadn’t witnessed since I started watching in 1984. That Doom went on to have the longest title reign in WCW history at 281 days was even more impressive. Although they were heels, my loyalty was always to Doom who weren’t booked as dancing, jive-soul bros, but rough and rugged wrestlers who just happened to be black.

Back in 1987, it was a big deal when Doug Williams became the first black quarterback to win the Super Bowl.When Russell Wilson won two years ago, it was hardly a major storyline heading in to Super Bowl week. I felt enormous pride and some disbelief when  Simmons defeated Big Van Vader to become the first black world champion in 1992. 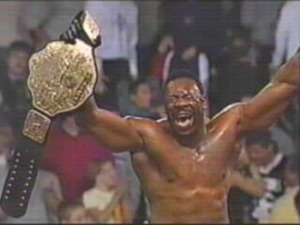 That thrill of seeing a black champion hasn’t lessened over the years whether it was Booker T winning the WCW world title on the final episode of Nitro, The Truth capturing the TNA world title or most recently Jay Lethal winning the ROH world title.

But as I’m in the process of re-editing my wrestling collection onto Blu-Ray, I’m stumbling into more and more instances where I wish I remained ignorant as I read or see a YouTube clip with wrestlers whose exploits I thrilled to in the past having disturbing and disgusting interactions with their black peers.

Wrestling like everything else isn’t immune to racism. It’d be foolish to think that in this fairy tale world of sports entertainment make believe that everyone would treat everyone based on their work ethic, dedication and ability, not the color of their skin.

But man, it sucks to read comments like Hogan’s that bash a guy his daughter’s dating and basing so much on it about his race, not cause he’s a scumbag or treats her bad. It’s a half-assed gripe and probably indicative of how Hogan’s life was spiraling out of control when the video was recorded.

For me, wrestling is escapism at its best so it’s disheartening to learn that a guy like Dick Murdoch was rumored to be in the KKK or the shameful attitudes of guys like Bill Dundee.

It’s equally hard to find some sort of context for the “old-school” wrestling mentality where racism was just another way to test and provoke peers to determine their toughness.

Crazily enough, my mind starts going into excuse mode to try to explain away the comments and actions. But they’ve got black friends! Some of the older black wrestlers say they respected the outright racists more because they knew where they stood!

Of course, can I honestly say I’ve never made a racist/hurtful statement back in the 80s, 90s or 00s that I deeply regretted and wouldn’t want blasted on my site? Can any of us? Still, there’s something damning when your childhood heroes fall so mightily. 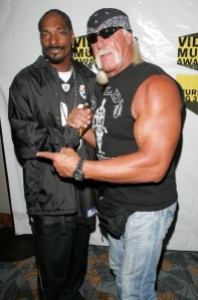 “Eight years ago I used offensive language during a conversation. It was unacceptable for me to have used that offensive language; there is no excuse for it; and I apologize for having done it,” Hogan said.  “This is not who I am. I believe very strongly that every person in the world is important and should not be treated differently based on race, gender, orientation, religious beliefs or otherwise. I am disappointed with myself that I used language that is offensive and inconsistent with my own beliefs.”

WWE quickly responded to the news with this statement released earlier today:

“WWE terminated its contract with Terry Bollea (a.k.a. Hulk Hogan). WWE is committed to embracing and celebrating individuals from all backgrounds as demonstrated by the diversity of our employees, performers and fans worldwide.”

For WWE’s quick attempts to scorch the Earth after news of this Hogan recording came out, they’ve yet to have a black wrestler (not named The Rock) as its WWE champion. Sure Booker T and Mark Henry won the world heavyweight title, but not the title whose lineage dates back to Bruno Sammartino, Bob Backlund, Bret Hart and John Cena. And it’s not like the dancing, singing and church act by The New Day is all that progressive in 2015.

The immediate gut reaction is to take a similar approach to my wrestling fandom, but there is some bright spots. Ring of Honor has at least six black wrestlers on their roster. The number that involves even thinly veiled stereotypes of rappers and dancers? Zero. 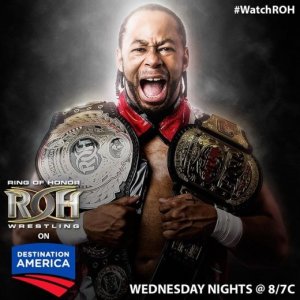 The world champ is Jay Lethal, who is also the ROH TV Champ in an unprecedented angle for any wrestler let alone a black wrestler where he’s defending both titles. ROH is definitely a promotion that doesn’t just talk about being inclusive, but acts on it as well.

In the end, Hogan screwed up. Like we all do. I suppose in the end, it’s more about being a better person than complaining about our heroes who so frequently remind us that they’re just as human as the rest of us.

“If we could change ourselves, the tendencies in the world would also change. As a man changes his own nature, so does the attitude of the world change towards him. … We need not wait to see what others do.”

0 thoughts on “Hulk Hogan: a reminder it’s hard out here for a black wrestling fan”