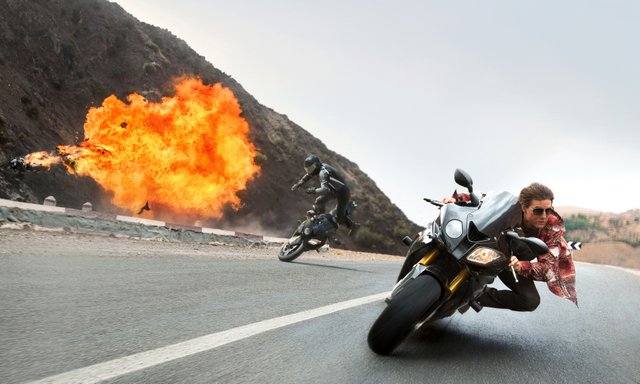 More a throwback to the latter Pierce Brosnan James Bond films than another step in the continued evolution of the franchise, Mission: Impossible – Rogue Nation is a solid, but not superior entry in the series. 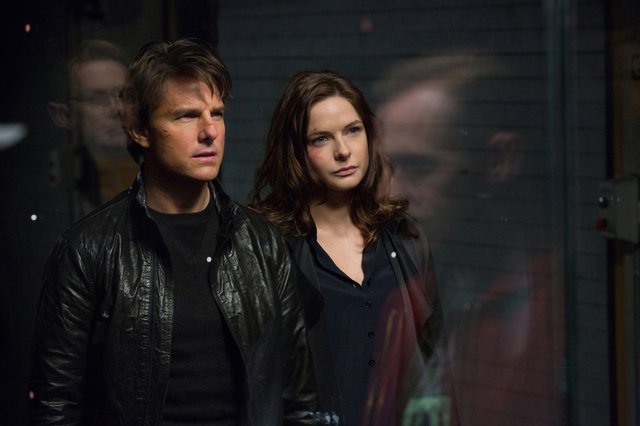 Since its debut 19 years ago, the franchise — like its leading man Tom Cruise — has managed to carve out its unique niche in the crowded spy genre. It remained relevant from the gadgetry-heavy Brosnan Bond to the lone wolf Jason Bourne franchise to the hard-edged Daniel Craig Bond, but ‘Rogue Nation’ marks the first entry in the series more comfortable treading in other franchises’ footsteps instead of igniting its own trail.

Paying homage to Bond and Bourne isn’t a bad way to go of course so there’s a lot to like with Rogue Nation, but finding more to love proves trickier. 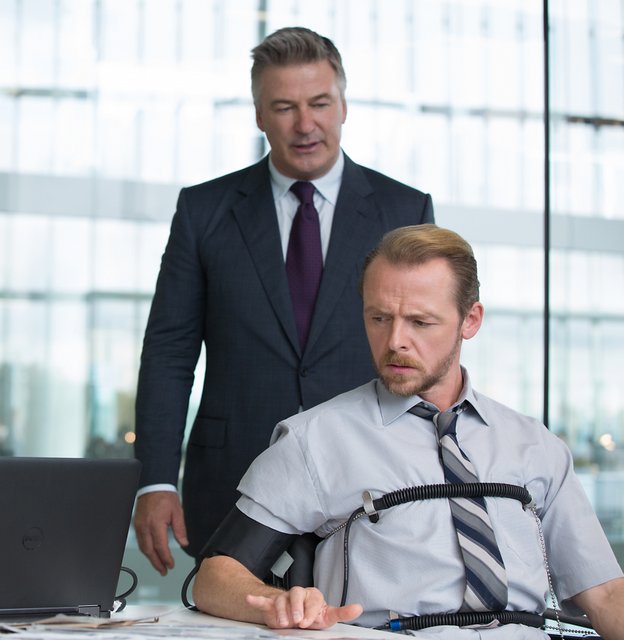 Ethan Hunt (Cruise, who at 53 is fighting Father Time as hard as any onscreen villain) is busy tracking down The Syndicate, a shadow group of spies and secret agents up to no good. McQuarrie isn’t too concerned with fleshing out the Syndicate, its mysterious leader Solomon Lane (Sean Harris, Prometheus) and poorly-skilled members who suddenly get a bad case of Stormtrooper aim-itis when matched against Ethan and company.

Like any good evil spy organization, there’s little proof of The Syndicate’s existence let alone being the group responsible for numerous worldwide disasters too frequent to be considered coincidental. 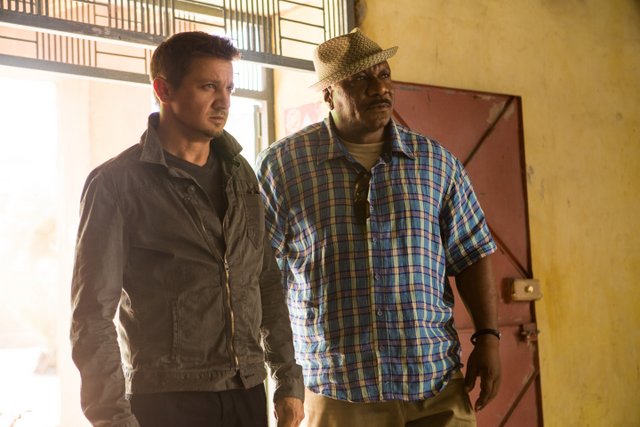 Nonetheless, the CIA led by Alec Baldwin (Still Alice), decides now is the perfect time to shut down the Impossible Mission Force.

This forces Hunt and his allies Benji Dunn (Simon Pegg), Luther Stickwell (Won’t Back Down) and William Brandt (Jeremy Renner, The Avengers: Age of Ultron) to enact ghost protocol… (sorry, that was last movie), go on their own yet again to stop the bad guys.

Just once, it’d be neat to see a government organization that helps our heroes instead of being another obstacle to outsmart. It’s a necessary evil when the antagonists are so poorly realized.

And it’s still odd that for a crack special mission force, IMF only seems to have three available agents whenever Ethan has a mission. 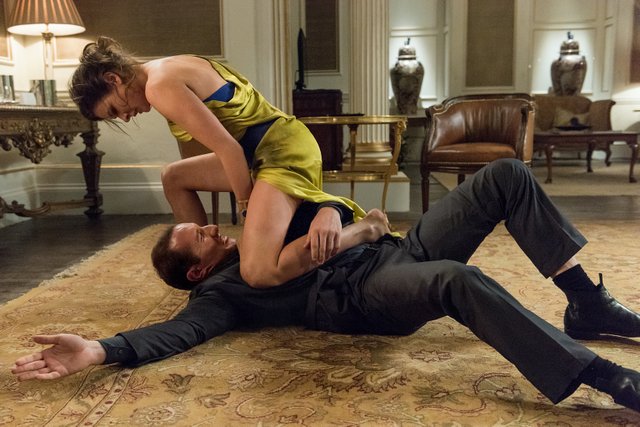 The series desperately needs some fresh blood if for no other reason than to have an expendable character to give these missions some measure of suspense. Since Ethan is now part Captain America/part mutant with rapid healing power capable of crashing a motorcycle, having minor brain damage and impeccable aim, it’d be nice to have a character who can take a bullet or at least be hurt long-term.

A mirror version of secret agents that can beat Hunt and crew at their own game is an incredible premise, but McQuarrie makes The Syndicate more of a threat in theory than realization.

McQuarrie raises an intriguing question if Ethan’s success is due more to luck than skill, but by the end, there’s more evidence of the former as Ethan just seems incapable of ever making the wrong decision.

Besides Benji’s fanboy-ish devotion, Ethan would be a lot easier to root for if his mistakes ever had an actual consequence or he wasn’t always the smartest guy in the room. It’s why Mission: Impossible III, which had Hunt two or three steps behind Philip Seymour Hoffman’s villain, remains my favorite in the franchise. 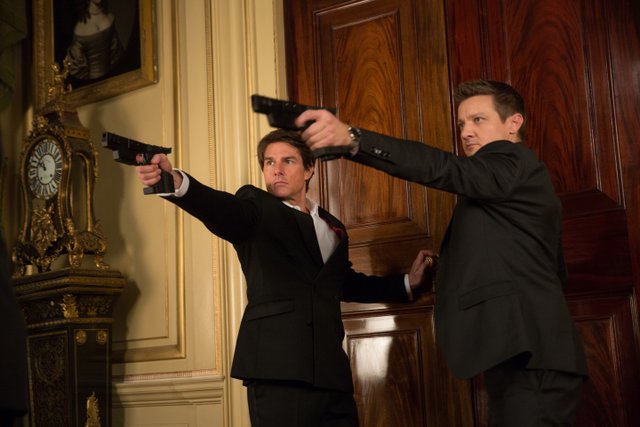 Pegg is reliable for comic relief, but Benji’s over eagerness works best in small doses not in this main supporting role.

Joining the series vets this time is Rebecca Ferguson as a MI6 agent who may or may not be an ally, but is definitely McQuarrie’s attempt at channeling the Bond Babe dynamic. There’s still a few lessons Ethan can learn from 007 however.

Fun franchise fact: only the first film featured two female IMF agents working as part of an operation. Since then, the female agent have proven far more disposable than Luther or Benji.

While the plot is all over the place, the film is at their best when the focuses on the action. Sure there are all sorts of logic-defying moments, but to paraphrase Walt Disney, it’s kind of fun to see the impossible. 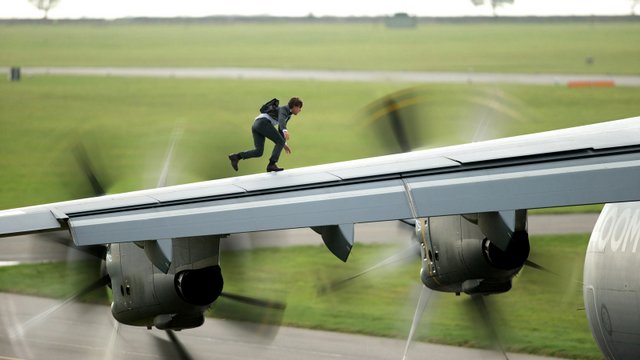 Besides that crazy airplane scene shown in the trailers, Rogue Nation lacks that crazy signature sequence like the Burj Khalifa tower scaling scene and the chase through the sandstorm of Ghost Protocol.

There’s a great underwater scene that’s visually stunning, but no more death-defying than holding your breath for three minutes and that’s no problem for Ethan since he can do anything.

It’s possible the best of the franchise is in the rear view now. Rogue Nation isn’t the worst installment of the franchise, but it’s the least daring, challenging and fresh entry in the series as McQuarrie and Cruise want to borrow a little from its competition instead of just being the best possible ‘Mission: Impossible.’