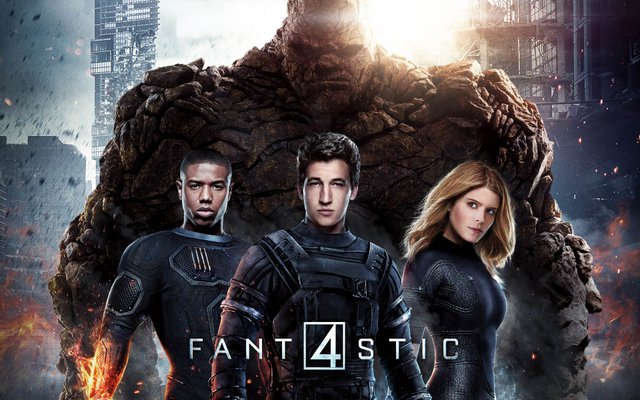 Just give Marvel Studios the damned license back already.

That was my first thought after leaving the screening of “Fantastic Four,” a massive misfire on so many levels there’s just no way to justify 20th Century Fox’s continued stranglehold of Marvel Comics’ First Family.

This is an unmitigated disaster on every level. Rather than a different, but engaging twist on the cornerstones of the Marvel Universe, it’s a shoddy, sloppy effort that seems to serve one purpose — keeping the Fantastic Four license under the Fox banner until it can be done properly.

While Iron Man and Captain America while force fans to pick a side next year in “Captain America: Civil War,” I’ll firmly be on Team Marvel Studios if this is the best Fantastic Four that Fox can present.

If this latest effort accomplishes anything, it’s making fans reconsider any animosity toward the Tim Story-directed “Fantastic Four” and “Fantastic 4: Rise of the Silver Surfer.” Those films had problems, but there was clearly a love of the source material and actual effort to do right by fans. This update spectacularly fails at Relaunch Rule No. 1 — being better than its predecessor.

Poor Miles Teller (“Whiplash”), Kate Mara, Michael B. Jordan (“Fruitvale Station”) and Jamie Bell (“Snowpiercer”) have no chance here, which is a shame as they’re talented performers. They get little chance to shine instead stuck going through the motions of a film with little purpose and less heart.

Director Josh Trank, who previously thrilled audiences with “Chronicle,” didn’t set out to make a typical comic book movie, but this isn’t a compelling sci-fi or character study either.

The film clocks in at 100 minutes, which isn’t nearly enough time to restart a franchise and establish the characters. Instead of character development, the bulk of the film is dedicated to the group along with tech whiz Victor Von Doom (Toby Kebbell, “Wrath of the Titans”) trying to cross over into another realm. Maybe for extreme science geeks these scenes are fascinating, but for most of us, this endless sequence is the stuff that montages are made of to skip to the good part.

To the film’s credit, the event that leads to the team gaining their powers is a smart modern update on the 1961 origin where the characters race to space to beat the Russians. The effects of Jordan’s Human Torch are the one well-executed throwback to the comic and is the best the character has been conveyed on screen yet. As far as positives go, that’s about all the film has going for it.

At the core of the team and what separates them from the Avengers and the X-Men is its family bond. The script, compiled by Simon Kinberg, Jeremy Slater and Trank, offers little reason for this group to be associated let alone providing any sense of a family unit.

For all the controversy over Mara’s Sue Storm and Jordan’s Johnny Storm being siblings, there’s hardly any effort to showcase that bond or show any closeness between Sue and Johnny. Good luck trying to find any trace of romantic sparks between Teller and Mara as well.

After the team gains their powers, the script inexplicably fast forwards a year and zooms past the typical power learning curve segment to show them working with the government.

In the best comic book movies there’s a spirit of fun, liveliness and excitement where you can easily envision yourself soaring through the clouds, shooting repulsor rays from your suit of armor or kicking butt with a talking raccoon. Making the heroes government lackeys is a quick way to keep audience interest low.

Trank’s take on the FF is so sterile and devoid of emotion that the characters come across as distant, cold and otherwise unlikeable. The actors don’t seem sold on their characters either and their performances either come off as flat or indifferent. It’s hard to blame them. Bell especially seems like he’d rather be anywhere but this movie and his take on The Thing is especially disappointing. Maybe it was due to the lack of pants?

Stan Lee didn’t even bother making his seemingly contractually obligated cameo. Sign No. 2 your Marvel movie is in trouble — Lee doesn’t want any part of it.

The final act fight with Doom, who’s now become a villain simply to give someone for the team to battle, reaches “Batman & Robin” levels of incompetence with terrible dialogue, effects and a nonsensical conflict.

It’s hard to pin down the most embarrassing moment, but the nods to the fans like The Thing yelling “It’s Clobbering Time!” as if that could somehow undo the rampant disregard for the comic would rank pretty high.

Like Richard Donner before him, Trank’s vision of this Fantastic Four movie seems to have gotten lost somewhere along the way such as a deeper exploration on the psychological effect of gaining these weird powers.

There’s a slew of scenes from the trailers that didn’t make the final cut of the film. A longer cut of the film might not have saved it, but maybe it would help make more sense of everything.

For Marvel die-hards, “Fantastic Four” exceeds every terrible expectation and there’s little reason to hope that going forward Fox is even capable of making the adventures of this foursome remotely fantastic. At this rate, I’d just settle for entertaining.