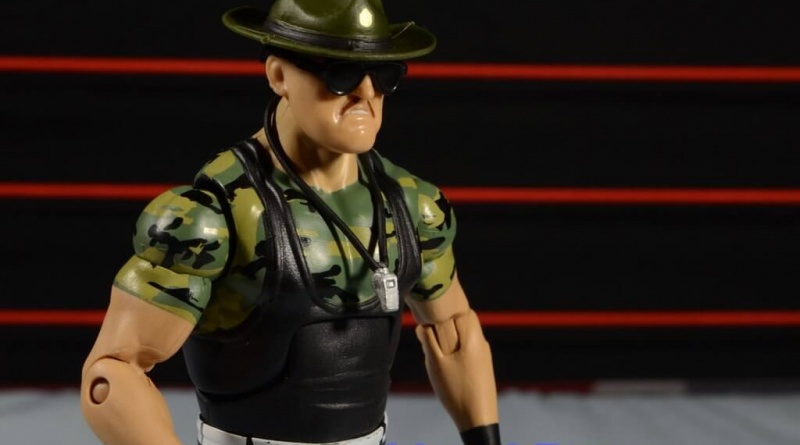 When Mattel first started with a Legends line for its newly acquired WWE license, it was a solid mix of stars from several different eras. We got the main star of The Attitude Era with ‘Stone Cold’ Steve Austin, NWA mainstays in The Road Warriors, a 1990 version Dusty Rhodes and one of the few legends Jakks wasn’t able to get in Ricky ‘The Dragon’ Steamboat.

The only real questionable inclusion was Sgt. Slaughter. Not so much because the G.I. Joe pitchman didn’t warrant a legends figure, but because Mattel bizarrely opted to go for Slaughter’s WWWF attire when he was managed by The Grand Wizard. It was an odd choice because it’s not the first look you consider when thinking of Sgt. Slaughter. 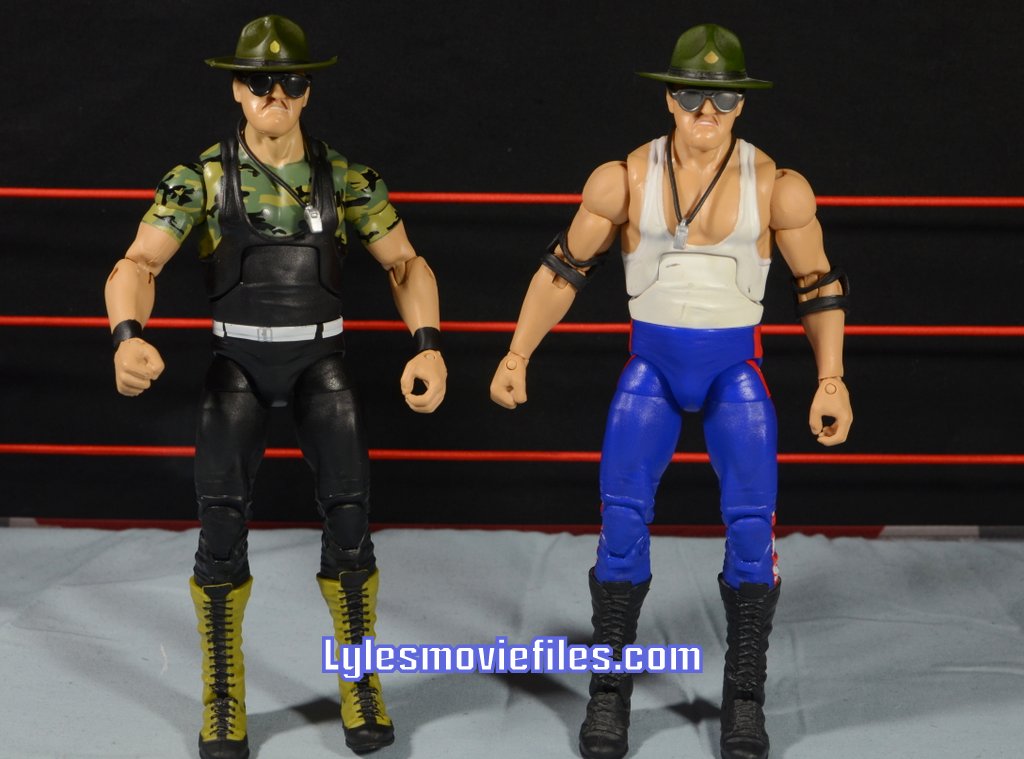 With its Hall of Fame  line, Mattel is fixing some earlier sins of its past and our first redo is Sgt. Slaughter the way he should have been all along. Now we’ll see if it’s induction worthy.

Packaging: I’m a big fan of the Hall of Fame packaging with the classy blue and gold color scheme. I love the side portrait that recalls a Hall of Fame bust and like the detailed bio on the back. Still unsure why the ring attire says the year Sarge was inducted into the Hall of Fame instead of a specific match, but that seems a goof that’s consistent with the other figures in the wave like The Ultimate Warrior.

Likeness: As one of the earlier figures from Mattel, you don’t hear Sarge’s name mentioned as one of the best likenesses, but there’s no mistaking him for another character.

He certainly passes the test of being able to identify him just by the head alone thanks to the prominent chin and expression that seems to have just finished uttering “at ease disease.”

For the idealized take on the WWE stars, and from looking at numerous pictures of Slaughter from 84-90, this body looks to be a pretty good resemblance  something that isn’t always the case in the line. 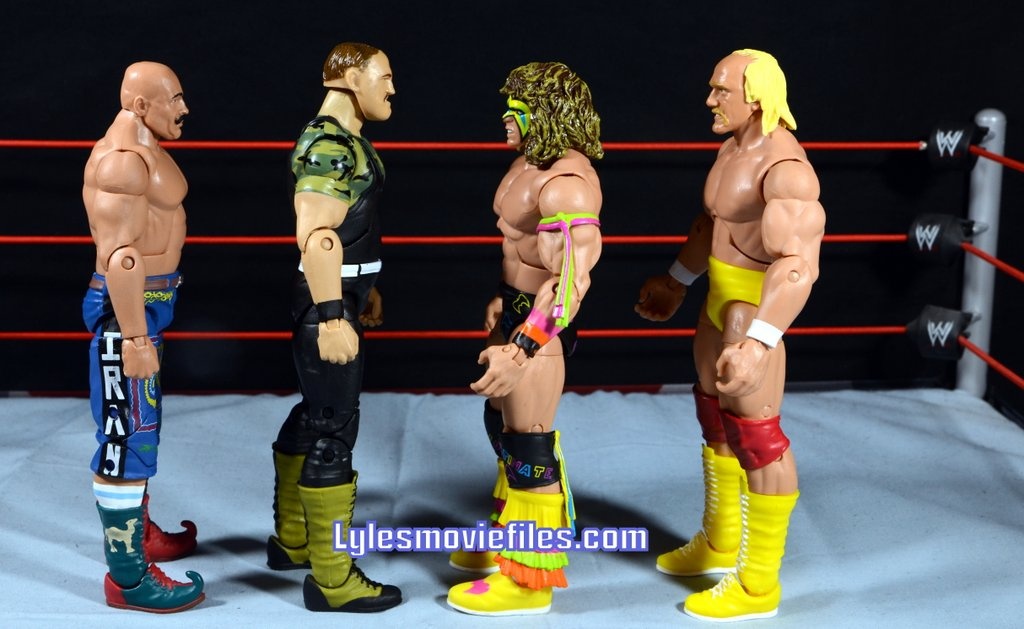 Paint: With a camo pattern, that can be kinda tricky. I wished Mattel had sculpted  the T-shirt on, but the paint is fairly tight enough that it’s not an issue. 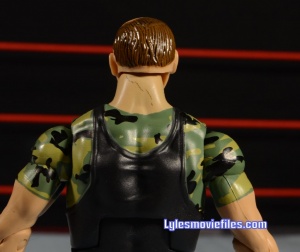 Unfortunately, my figure had some serious scratch marks on the back of the neck — the most frustrating spot since it’s a flaw you don’t notice until after you open the figure and thanks to the painted skin tone, it’s a bit more difficult to fix.

I’m not sure if there was some sort of issue with the Armed Forces, but I would have liked to get a bit more detail on the boot like the logo he sported throughout his career. As is, they’re a bit too plain for my liking. Ditto for the black wristbands as I would have loved to get the red, white and blue striped wristbands.

For the most part you’re going to be able to get all of the major moves in Sarge’s repertoire, but the Elite body has its limitations. You’ll be able to easily do the Slaughter cannon (clothesline) of course and you can kinda do the cobra clutch, but good luck trying to get a good synched-in camel clutch.

Accessories: Sgt. gets kinda cheated in terms of accessories compared to the rest of his wave mates. He gets his trademark hat, sunglasses and whistle. You could argue Sarge doesn’t need anything else, but these accessories are completely recycled from the Legends 1 figure. 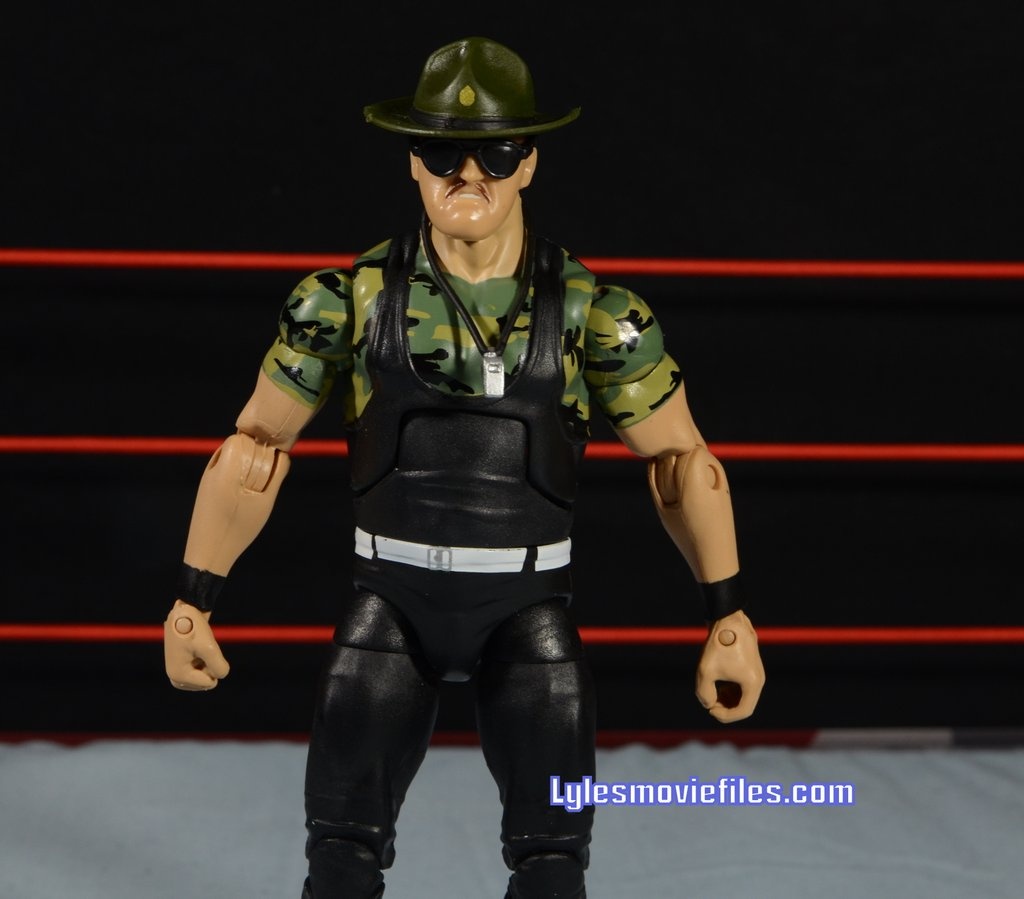 They make sense, but as someone who got the Legends figure, I’d love to have seen the inclusion of Sarge’s riding crop and a helmet. The one I’m using comes from the Elite 23 Triple H so it’s not like Mattel doesn’t have the mold already.

Worth it? Let’s face it, this is the version of Sarge WWE fans wanted all along and Mattel’s first make-good figure doesn’t have us in need of a third version. Unless of course Mattel feels obliged to make his latter Iraqi sympathizer attire with the curved boots.

And as an extra bonus, we pretty much consider this the first 6″ G.I. Joe figure, which will be outstanding if Hasbro ever decides to stop making collectors beg for a 6″ take on the Real American Hero characters.

The belt buckle is a bit distracting and the accessory re-use is a little disappointing. They’re minor things, but enough to keep Sarge from a perfect score. Beyond that there’s no reason to skip him this time out. 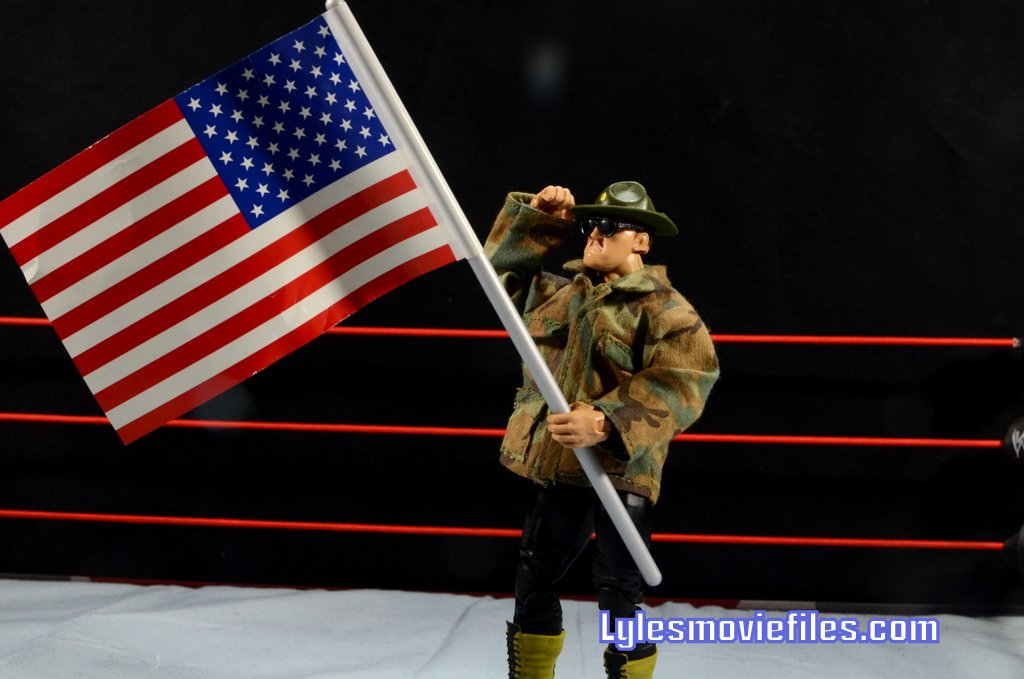 Where to get it? The Hall of Fame line is exclusive to Target. You’ll find most of these still in stores, but with the second wave also available don’t count on a lot of restocks so if you see him you’d best grab Sarge now.

If you can’t find him that way, you may want to give Amazon.com a try.
Mattel, WWE, Elite Collection Hall of Fame Exclusive Action Figure, Sargent Slaughter