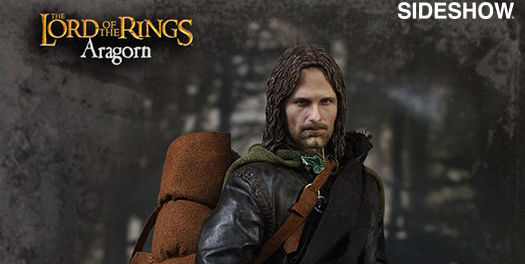 When it comes to “The Lord of the Rings,” I’m strictly an Aragorn guy. Frodo gets all the attention, but he never did much for me.

I dug the whole backstory of the rightful heir to the throne concerned he’ll have the same issues as his forefathers and with the film version played by Viggo Mortensen, Aragorn is definitely among my Top 10 favorite movie characters of all-time.

Sideshow Collectibles is teaming with Asmus Collectible Toys for 12″ figures of key characters from both “The Lord of the Rings” and “The Hobbit” trilogies and fittingly, Aragorn gets first crack for the LOTR representative.

“I would have gone with you to the end, into the very fires of Mordor.”

Sideshow Collectibles and Asmus Collectible Toys are proud to present the Aragorn Sixth Scale Figure from The Lord of the Rings trilogy. The collectible figure features an authentic likeness of Viggo Mortensen as seen in the films and features a detailed costume, elven weapons, and an interactive custom base.

LOTR fans, don’t miss your chance to collect the infamous Ranger of the North!