1. Straight Outta Compton – $56.1 million [debut week] The rap biopic lit up the box office to earn the 10th highest opening of the year. Not bad for a group who’s heyday was in 1991.

With an “A” CinemaScore that falls in line with critics’ admiration (“Compton” is currently at 88% on RottenTomatoes.com), look for this to continue to be a major player in the coming weeks.

As far as music biopics go, “Compton” is in a class by itself as its debut weekend blows away the competition. The next best was “Walk the Line,” which debuted in 2005 to $22.3 million en route to a $119 million total gross.

Despite the not at all subtle racial overtones from theaters providing extra security for the film simply because it featured black hip hop stars, audiences were not deterred. Perhaps theater chains should make that the norm for all movies including romantic comedies there wouldn’t be any more tragedies like “Trainwreck,” where a shooter killed three people.

But maybe John Russell Houser was a closet N.W.A. fan? Just a reminder, the only thing that needs to get killed quickly in 2015 is racism from everyone. 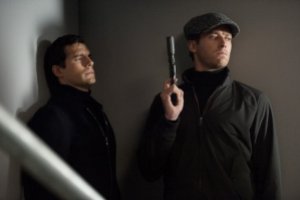 3. The Man From U.N.C.L.E. – $13.5 million [debut week] Audiences weren’t in much of a mood for 60s retro. Despite the appealing cast including Henry Cavill, Armie Hammer, Alicia Vikander and Elizabeth Debicki, the big screen adaptation of the 60s show failed to generate much interest.

4. Fantastic Four – $8 million [2nd week; $41.9 million] A week after its awful debut that’s been filled with incredible stories of rumored near fights between director Josh Trank and star Miles Teller, studio interference, studio intervention and desperate pleas including a petition to get the license back to Marvel Studios, 20th Century Fox is having one terrible week. Fox execs no doubt are hoping another bomb arrives in theaters ASAP.

5. The Gift – $6 million [2nd week; $23.5 million] Steady word-of-mouth and an intriguing premise kept the thriller, which has already made back its $5 million budget, in the Top 5.