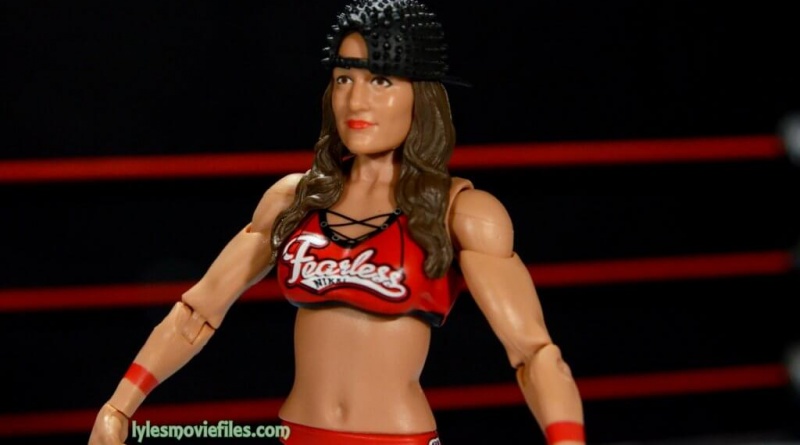 After a couple of twin packs, Mattel decided to give the Bella Twins separate releases. I’ve already broken down Brie Bella, but now it’s time for the reigning and soon to be record-setting Divas champ Nikki Bella in the latest Basic series.

Mattel has released two Divas Elite figures — the series 21 A.J. Lee and the Elite 34 Paige. As the champ who isn’t going to lose her title until WWE can scratch A.J.’s name off the longest reigning Divas champ list, Mattel probably should have gone the Elite route with Nikki, but let’s see this Basic version fares.

Packaging: The Basic packaging lives up to its name. It’s not flashy, but I like the splash effect that draws your eye to the figure and the nice large portrait to the side. I’m still trying to make sense of the numbering system as Nikki’s wave mates run from 3, 8 to 48.

My main gripe remains any lack of personalization — specifically a bio box. Mattel assumes you know who you’re buying and don’t need any text to further sell you on the purchase.

Likeness: Since the Mattel Diva bodies are all so generic, the face is the most important and for the Divas you want them to look somewhat attractive.

Whatever your thoughts on her wrestling skills, Nikki is HAWT hot, like one of the all time hottest divas kinds of attractive. This figure captures little of that and is far too homely for the more extravagant Bella twin.

Yeah, the Brie Bella likeness wasn’t exactly perfect, but the smile expression helped. Going with a stern look for Nikki wasn’t a great idea especially since it looks less like ‘I’m fearlessly focused’ and more confused. 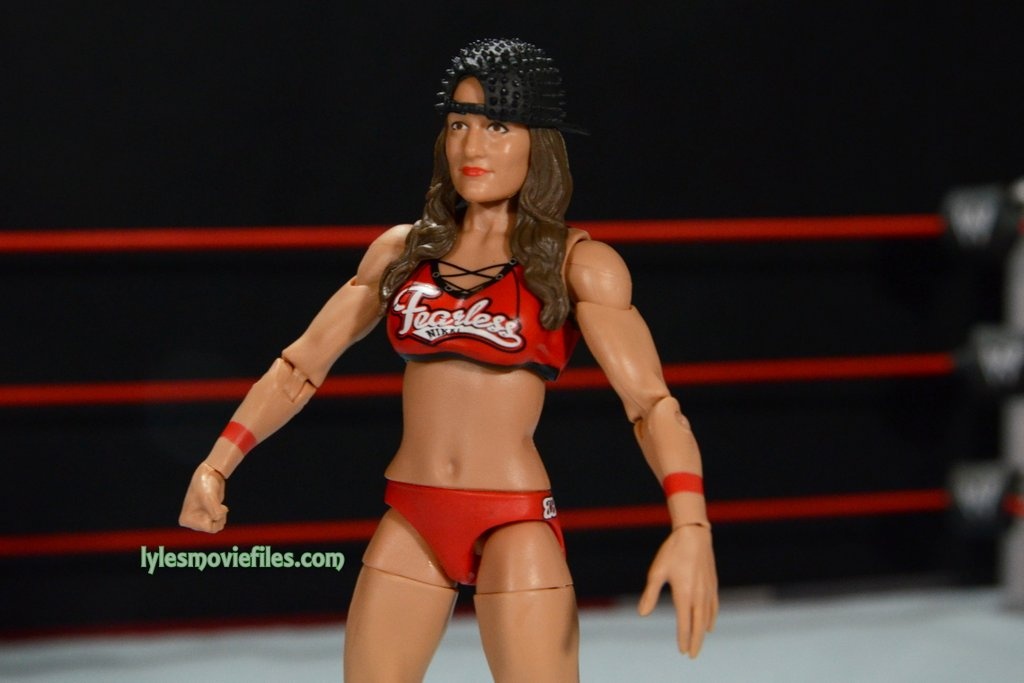 The attention to detail is real hit or miss. Nikki got a boob job and her chest is noticeably bigger than Brie’s yet the figure doesn’t fully reflect the enhancement.

I wasn’t quite sure where to put this one, but Nikki has Mattel information stamps on the backs of both legs. I didn’t go through my entire collection, but I only saw the stamp on the back of Rusev’s leg so not sure what makes figures special enough to warrant the stamp. It definitely doesn’t help the aesthetics of the figures with bare legs. 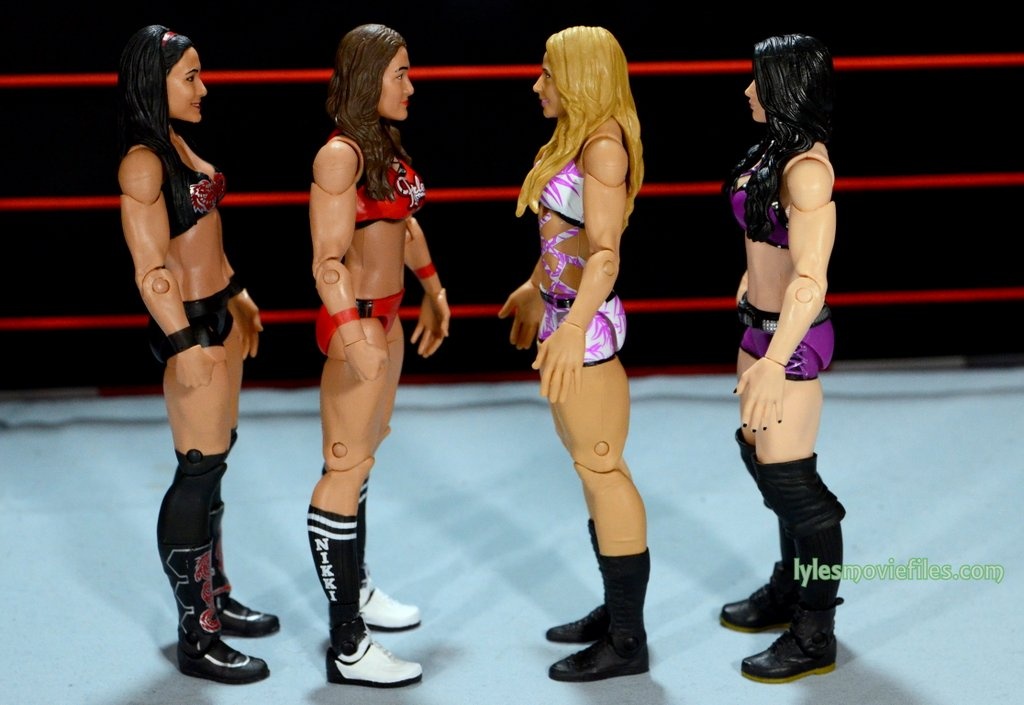 Scale: Nikki is billed at 5’6″and stands just about right compared to  the 5’5″ Emma and 5’8″ Paige. Paige should be a fraction taller, but Nikki seems to be right on the mark.

Paint: Like Brie, Nikki would probably benefit from a better painted face. The head sculpt captures the basic elements of Nikki, but for the Divas, a makeup paint app would help soften the face and not make them look so harsh. That’s definitely not in the Mattel budget, but those of you with steady hands could probably enhance Nikki a lot.

Nikki reveals another Mattel paint app deficiency — hair color. The figure’s hair is cast in brown plastic, which helps to make her stand out from Brie, but Nikki has highlights in her hair that the one-tone color doesn’t accurately reflect.

I really wish Nikki had a dedicated shirt top like Paige as the painted strings connecting her top looks cheap. The red used for the wristbands is a little too light and doesn’t offer the depth to make it appear it’s not some odd skin issue.

Articulation:  Like all Mattel Divas, Nikki would be better off with a few more articulation points. I’d rather Mattel would just put in the additional points to make the Diva figures Elites.

The extra cost would be worth it to get some wider stances, double jointed knees and another hand so Mattel can destroy the left pimp hand mold.

Those missing joints are more annoying as they body is thisclose to being ideal. You can get most of Nikki’s signature poses, but not nearly as easily as you would with more articulation points.

Accessories: I kinda feel like Mattel knew this figure wasn’t totally up to snuff as for the first time I can recall, a Basic single pack figure comes with an accessory — Nikki’s hat. 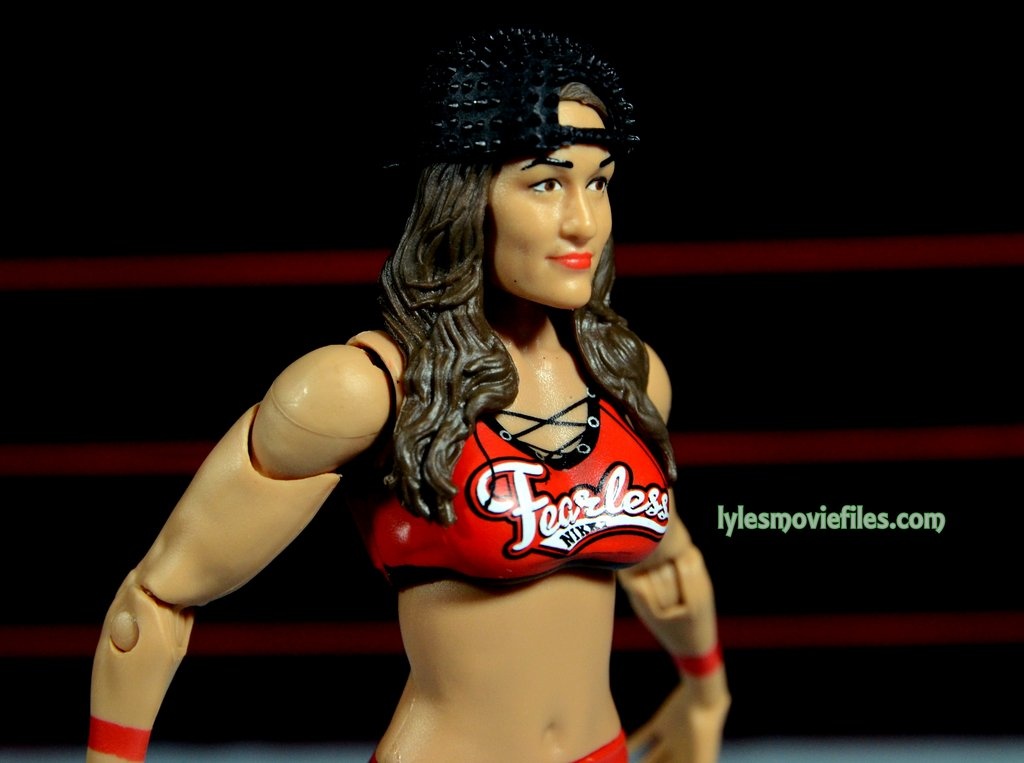 Mattel even went the extra route and detailed it up with the spike points so it’s not a regular baseball cap. The only problem is Nikki has a bit of a hat hair deal going thanks to her hat accessory. I’m all for including accessories, but not when it affects the figure itself.

Worth it? For a lot of reasons, Nikki is one of the weakest Divas that Mattel has released.  If you’re a die-hard Nikki fan and want a Fearless version, I’d recommend just waiting on the upcoming Battle Pack with Brie unless you absolutely have to have Nikki in her red attire.

Where to get it? I found Nikki at Toys R Us, which seems to be the main source for this wave of Basics. I suspect Target will eventually get them, but with their drastic reduction of WWE figure space it may be even harder to track them down. Divas are packed 1 in every other case so you really kinda have to grab one when you see them. 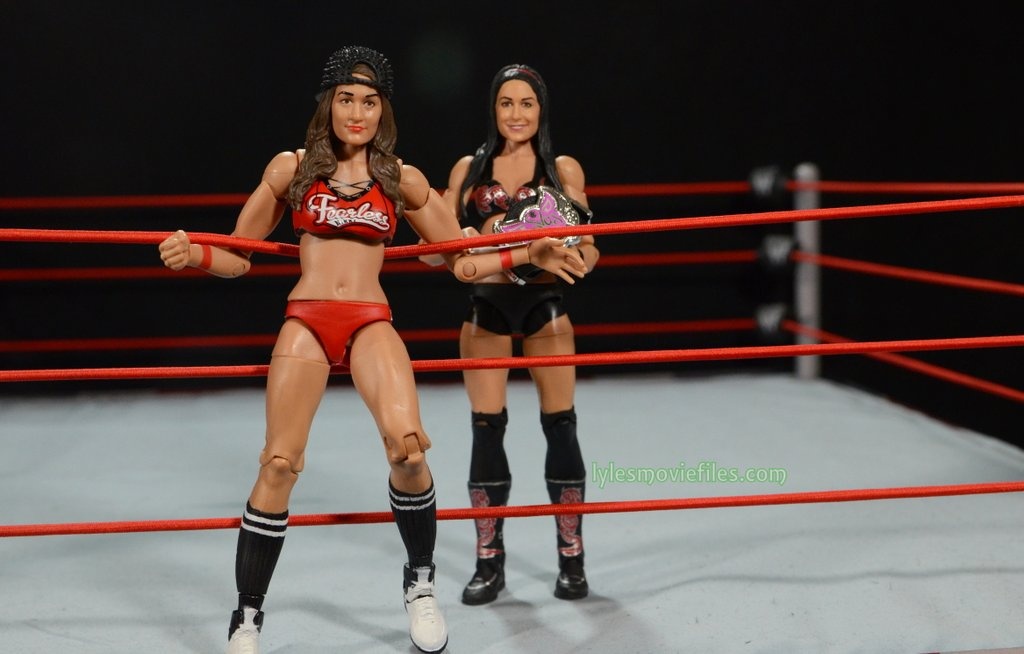 Don’t feel like playing the store lotto to track Nikki down? Pick her up from Lyles Movie Files site partner Amazon.com, which will kick back a portion of your purchase simply from using this link: