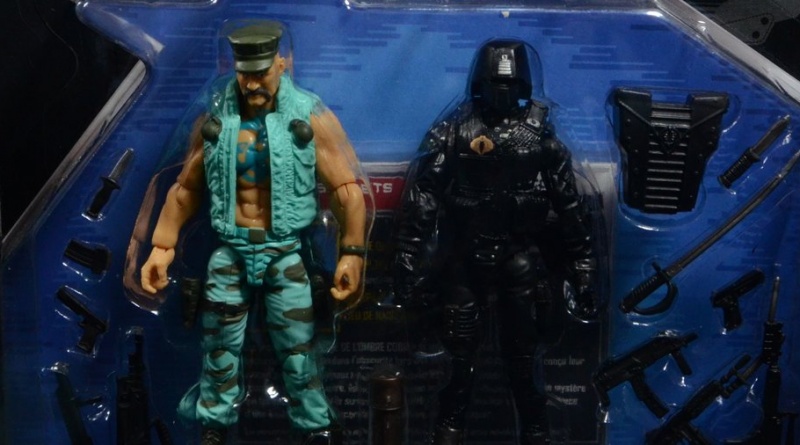 It kinda sucks these days to be a G.I. Joe fan.  Thanks to the strength of the films, Marvel collectors are getting C-list characters like Machine Man and Misty Knight in the Marvel Legends line. Even the crappy Transformers movies have made enough money to keep the Transformers stocked on shelves.

For Joe fans, we’ve watched as Hasbro raised the quality of the latter 3 3/4 figures only to see diminished interest in the line thanks to  one terrible live action movie and a sequel that failed to live up to most audience expectations. Nowadays, no movie or TV show means there’s little chance to have a sustainable line so G.I. Joe offerings have been far and few between.

On a Toys R Us run, I stumbled upon the latest set of two-packs, which if rumors prove true, will be the final assortment available in stores.

The assortment is largely comprised of repaints, but it also contained a crown jewel many Joe collectors have been clamoring for since the 3 3/4 line’s revival — Gung-Ho — packed with the Cobra Shadow Guard. Let’s see if he was worth the seemingly endless wait.

It’s hard to believe, but Hasbro first showed Gung-Ho as part of a 30th anniversary prototype wave back at the 2012 JoeCon. The wave featured updated versions of Leatherneck, Destro, Flint, Lady Jaye, Beach-Head and The Baroness, but Hasbro struggled to find an interested retailer. Though it took a while, Hasbro was finally able to release all of the figures in two and three packs over the last couple of years.

Packaging: The package is a little plain with the black backdrop and helps the sets blend in with all the various lines with black backgrounds. A bit more color would have it stand out especially since the Snake Eyes in the top left portion is lost among the rest of the black.

I do like the star shaped package as well as the prominent posing of the figures and their numerous accessories. And as a bonus, you won’t have to fiddle with rubber bands to remove the figures from the tray.

Likeness: Gung-Ho has a stern expression on his face and his horseshoe mustache is nicely sculpted.  The first relaunched Gung-Ho just had a mustache and lacked that signature Gung-Ho element.

Also appreciated is the muscular arms without the weird elbow bands the initial figure sported. Gung-Ho definitely looks like he’s been working out and this version doesn’t look weak next to Duke or Roadblock this time out. 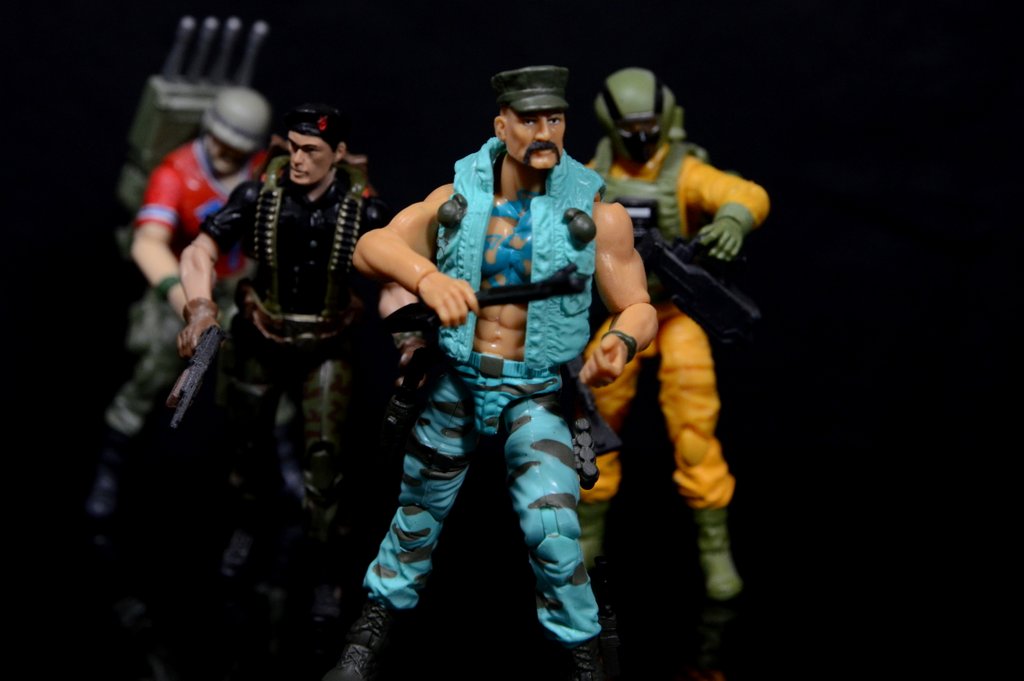 The outfit is well detailed as well from the dual grenades, watch, vest, pants, holsters and boots.

Cobra Shadow Guard is yet another repaint of the Crimson Guard, this time painted black. My Joe part knowledge isn’t what it once was, but the top half is mostly a Crimson Guard head and torso with what appears to be a removable vest.

There’s a peg on the left side, but the head made removing it tricky so I didn’t keep messing around with it. The bottom half is more intricate with two holsters, kneepads and ankle guards.

Scale: Back when Hasbro made the 5-pack Cobra and Joe sets, Gung-Ho was one of the five Joes, but even then his figure looked puny and unimpressive. It’s taken forever, but this time we get a figure that looks like the bada$$ Marine we all know and love. He’s on the larger body type and towers over most regular size Joes, just the way I prefer.

CSG’s scale isn’t nearly as important. He’s a Cobra grunt and his average size is fine.

Paint: CSG has more color than you might expect from the initial glance with silver accents and a gold Cobra insignia on his vest. The paints are sharp without any obvious gaffes.

Gung-Ho makes a nice contrast with his aqua blue vest and pants (with camo) that pop just as much as the first figure back in 1985. The right eye seems a little off center, but it’s not a major issue unless you’re trying to gaze deep into his eyes. The marine tattoo on his chest is nice and huge though it’s not as detailed as previous versions.

Gung-Ho is nearly as good just lacking the shin articulation, which is swapped for ankle articulation. Given his physique and Gung-Ho’s more down and dirty fighting style, I wish he had bicep articulation as well, but it’d be foolish to think Hasbro would tack on another articulation point at this juncture. Neither figure’s articulation is affected by their vests. 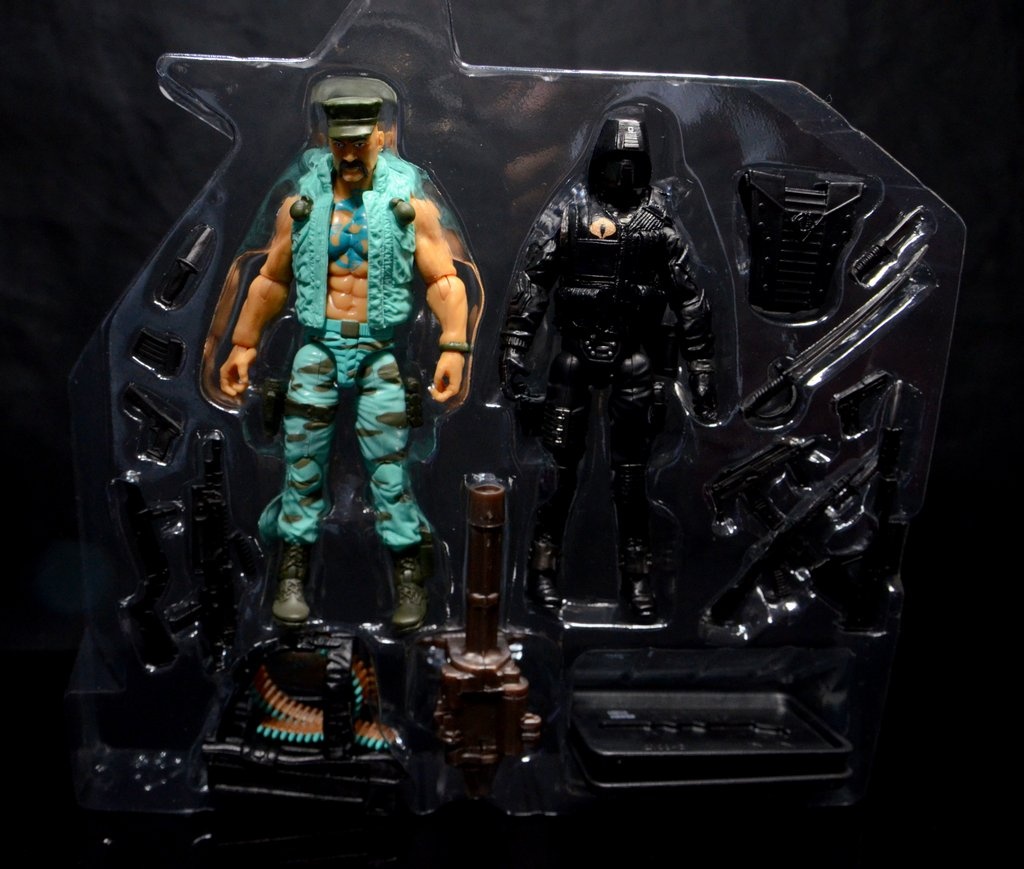 Accessories: Similar to most of the latter Joe releases, the figures are packed with accessories. It’s a lot easier to justify the cost of these figures as they’re loaded with all kinds of goodies.

At least from the pairing in the package, Gung-Ho comes with a grenade launcher, a knife, a smaller pistol that fits in his holster, a smaller machine gun with clip, the large chain rail gun with clip and the stand. You won’t find yourself needing the stand too often though as he can do most poses just fine.

Given Gung-Ho’s size the grenade launcher looks a bit small in his hand. I’ll have to dig around for a larger one. The only piece “missing” was Gung-Ho’s backpack, which was one of my favorites in the vintage line. Gung-Ho does suffer from the legacy issue with this updated line in that the weapons don’t stay in his hand as securely as you’d like.

Once you find the sweet spot, they’ll fall out of his hands if you start fumbling with them. It’s been the one issue where the updated line largely fell short compared to the vintage line and Hasbro never got around to fixing it. 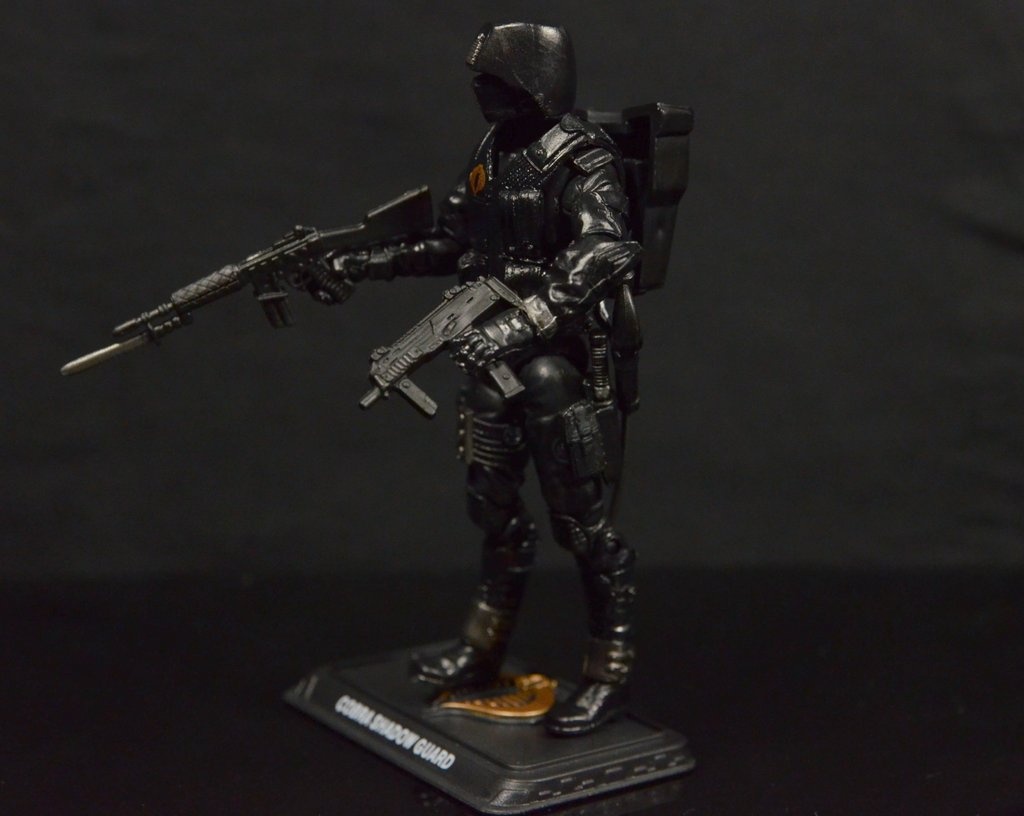 CSG is loaded. He comes with the traditional Crimson Guard backpack and rifle with bayonet, a submachine gun, a sword, knife, and small gun (all of which fit in various holsters) and another machine gun.

There’s also a backpack, which I can’t place who it originally came with. Due to the vests, it doesn’t work especially well with either figure.

Worth it? If you’re like me, you’re just getting this set for Gung-Ho. Given the only way collectors can get new Joe product is from the Collectors Club, which start off above $35, getting an essential character like Gung-Ho for $16 isn’t that bad a deal.

Back in the stone age days when I first got Joes, they were $2.99 with mostly recycled bodies and head sculpts. I can definitely see $5 worth of improvement with these figures. 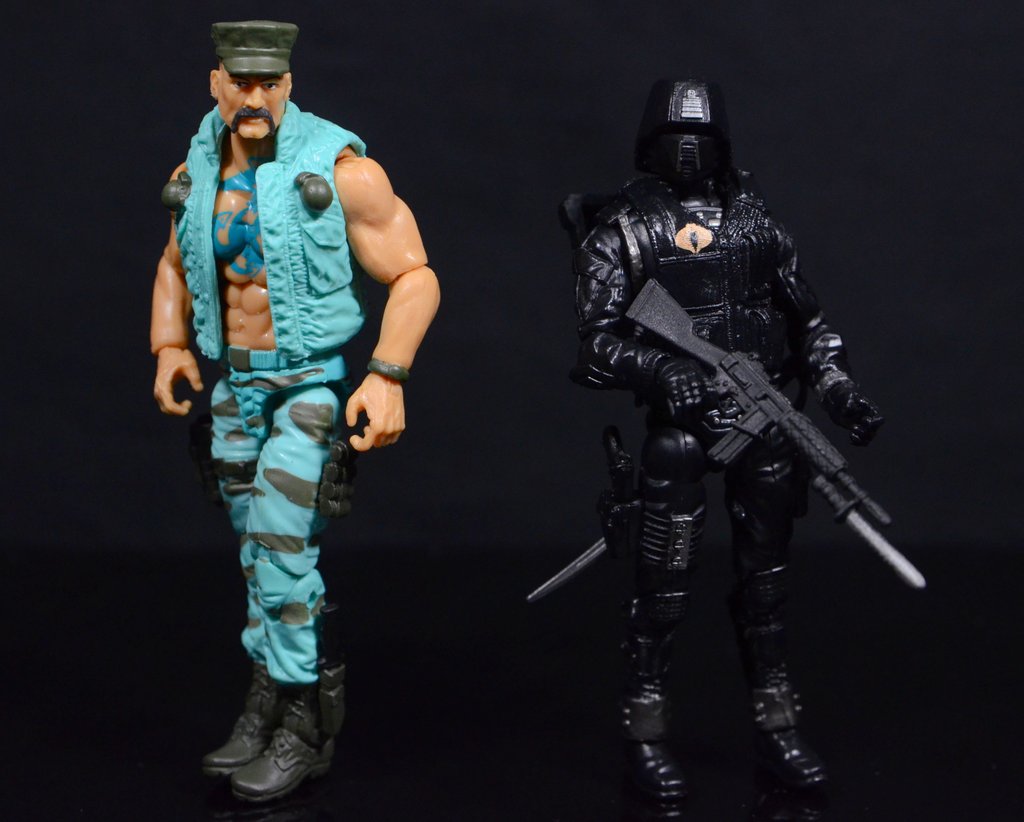 The weapon holding issues are the biggest issue once again. While initially I just wanted another Crimson Guardsman, the night attack angle is kinda cool and the figure was good enough that I’ll hang on to it. This is a top-notch set and the gem of the latest wave. Even if you’ve lost interest in the line thanks to spotty releases, you’ll regret not having Gung-Ho in your collection.

Where to get it? These Joe sets are exclusive to Toys R Us, so that’s your best bet. I’ve seen the sets at two Toys R Us stores and this is the first set to sell out so if you spot it, grab it as I don’t know how frequently they’ll restock.

Entertainment Earth did have the sets on the website, but they’re currently sold out and I’m not sure if they’ll be getting another shipment in.

Failing that, you can always grab the set from site partner Amazon.com, which will kick back a portion of your purchase to help keep the site rolling and all you’ve gotta do is use the following link: