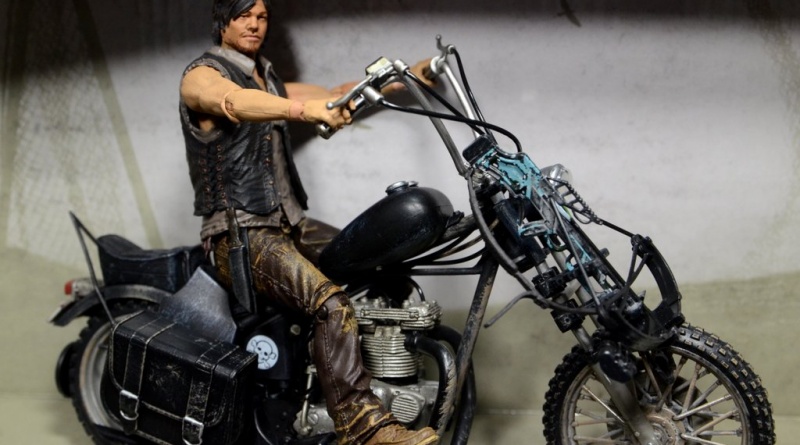 Ask any fan of the TV series version of The Walking Dead to name their three favorite characters and Daryl Dixon will definitely be in the mix if not be everyone’s outright favorite.

McFarlane Toys knows that as well and after its initial lackluster crack at Daryl, they’ve released a much improved figure with its first deluxe set featuring Daryl and his chopper motorcycle. Is it worth battling the dead to add to your collection? Let’s find out! 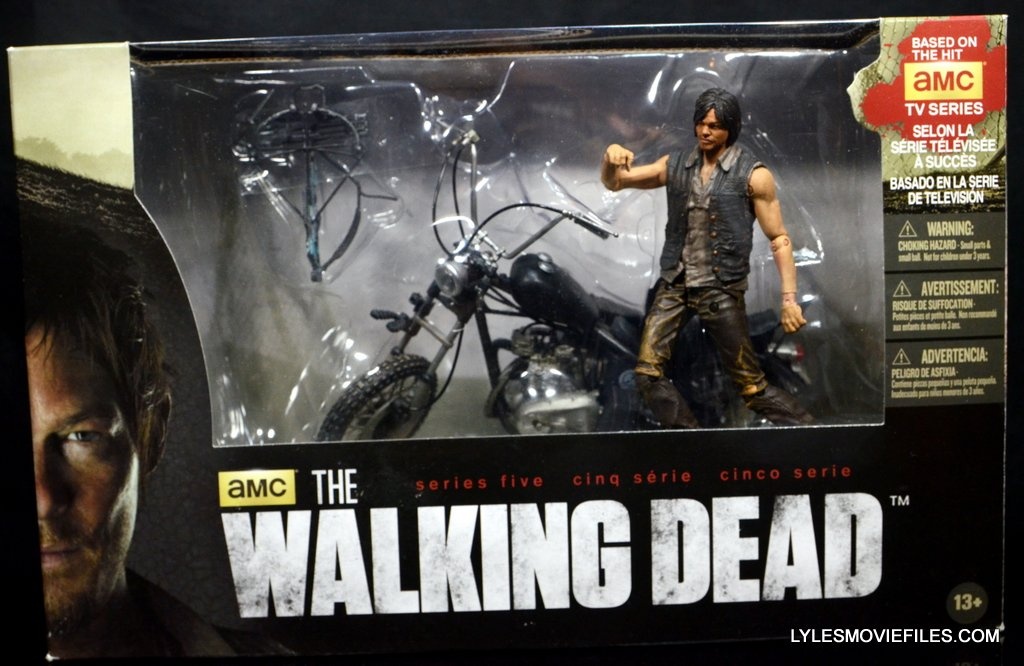 Packaging: The package prominently features Daryl’s portrait on the side albeit an earlier season look than the figure this is based on. There’s a nice window panel to display the figure and chopper.

I appreciated the bio as well as the checklist of other available figures.

Likeness: I may be unfairly judging this against the very strong likenesses from the Series 5 wave, which included Glenn Rhee and Tyrese, but initially I couldn’t see actor Norman Reedus at all in this figure.

After fiddling around with the figure from various angles and perspectives, I can see more of the likeness making me suspect the sculpt is there, but the paint job is more to blame for the likeness issues. The hair sculpted could stand to be a bit more disheveled as well since Daryl isn’t exactly the daily combing kind of guy.

The McFarlane Toys sculptors had a lot of fun covering all the various details in Daryl’s outfit. The vest is extremely well detailed for this scale with a terrific weathering affect to capture the leather material, the connecting links on the sides, the angel wings on the back and the buttons along the front.

While the vest isn’t removable, it is sculpted separately allowing for greater movement in the mid-torso area. The shirt underneath looks great and even has the ripped sleeves.

Likewise, the jeans have a solid amount of detail complete with a ripped hole in the knee area, Daryl’s handkerchief and an attached/non-removable sheath for Daryl’s knife.

Scale: TWD figures are in a 5″ scale and for the most part, there’s not going to be a lot of shifts in heights between the characters since they’re all regular people. 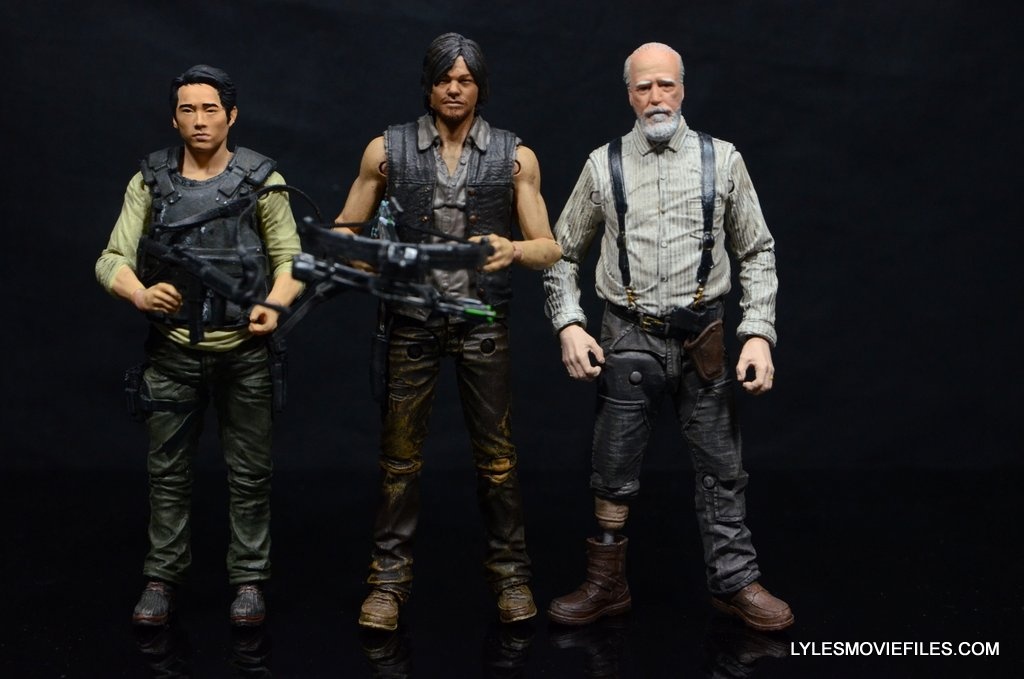 Reedus is 5’10” and co-star Steven Yeun, who plays Glenn, is 5’9″. Scott Wilson (Herschel), and Chad L. Coleman (Tyrese) are both 5’11” and the figures do a decent job conveying the discrepancies although not nearly to the level of a Mattel with its WWE line.

Paint: As I mentioned earlier, the paint job in the face is washing out a lot of the details in the sculpt. The prototype has an exact likeness so I’m betting customizers could repaint the head to fully bring the likeness out. 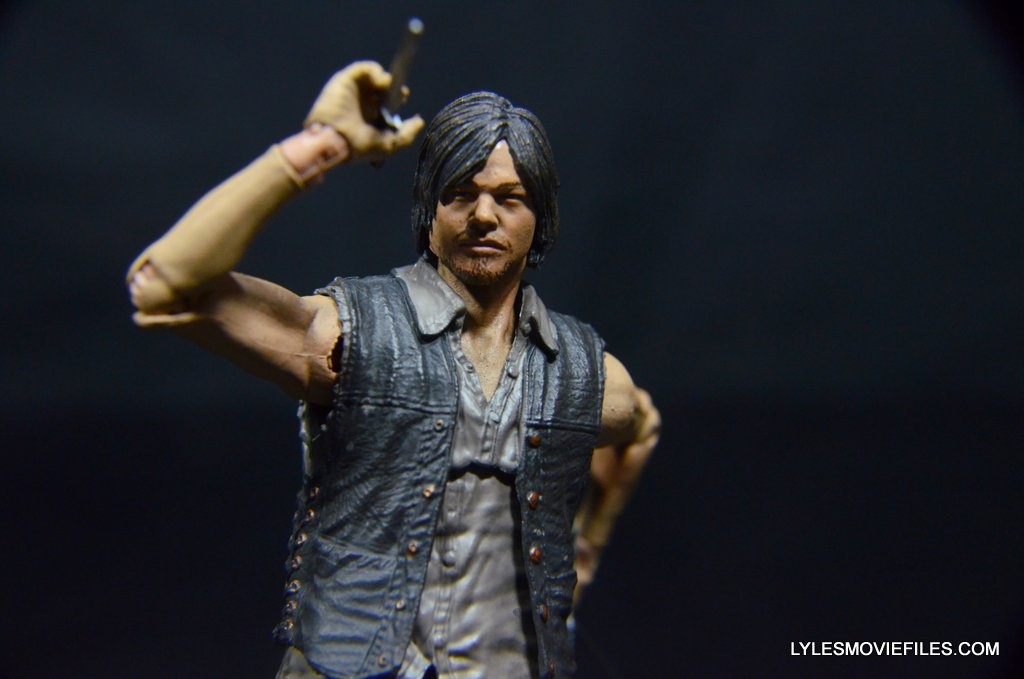 Beyond the head, the paintjob is just about perfect. The weathering and muddy look on the jeans is just the right amount. The right side of the vest rungs are dead-on while the left side is off, but it looks good enough from a distance.

Articulation:  When McFarlane Toys initially released its Walking Dead TV line, the figures were essentially smaller-scaled statues with minimal articulation and passable likenesses. They’ve dramatically upgraded the figures on both fronts and this Daryl has some of the best articulation I’ve seen all year.

Daryl’s got a ball-jointed neck, ball-jointed shoulders, elbow and wrist articulation with the unique ratchet scheme that allows for side to side and a deeper back and forth movement, mid-torso, waist, hinge hips, hip articulation, ratchet knees and very restricted foot articulation.

I’m a big fan of the articulation scheme as there’s not a lot of poses you won’t be able to get. And unlike some of the other figures in the line, Daryl doesn’t have any problem standing. Going forward I’d love to see Daryl’s articulation becoming the default for the line. 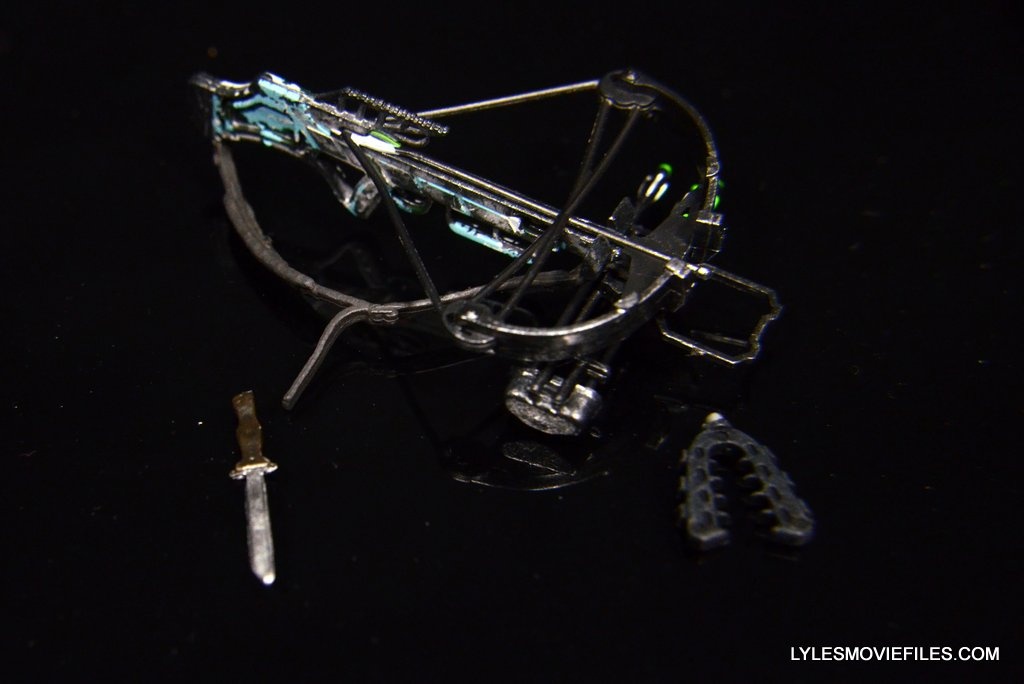 Accessories: Daryl comes with three accessories. One of course is the other selling point of the deluxe set, but let’s start small.

Daryl has his hunting knife perfect for going through the head of a walker. The knife seems scaled properly even if it looks a bit small from a distance. It fits better in the left hand, but it’ll go in the right as well, but I’m most excited that it can go in the sheath so well without constantly having to worry about it falling out.

Next up is Daryl’s trademark weapon – the crossbow. Initially, the blue green splatter threw me off as I just remembered it being one color, but a few reference pics confirm this is accurate. Maybe Daryl’s more like a Jedi than I thought in that he constantly changes crossbow colors? It fits in his hands well and helpfully already has a bolt loaded. The carrier underneath has three other non-removable bolts as well.

Now for the other major selling point — Daryl’s chopper motorcycle. I’m not a big motorcycle guy so I won’t be able to complain about any small elements, but from my novice eyes, this is a great 5″ scale bike. 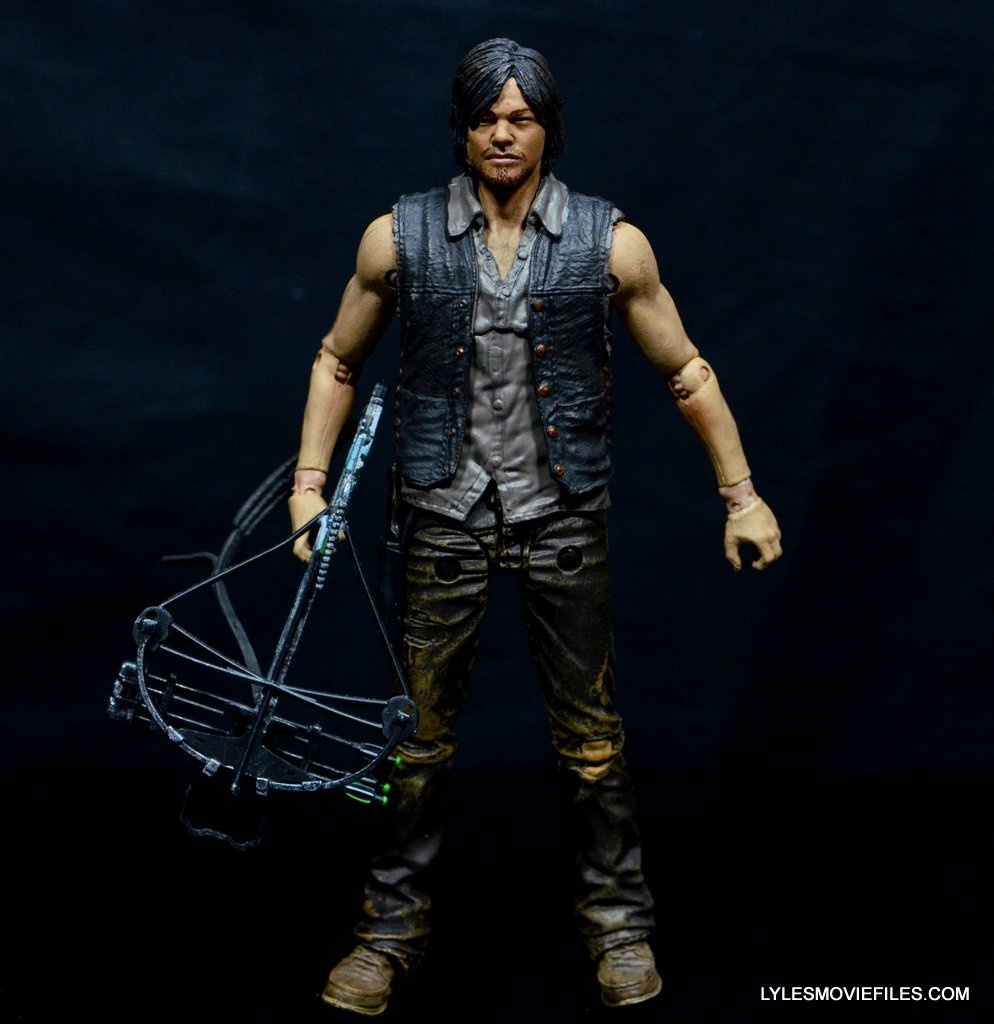 The rear tire has a small tab to help keep it standing, but it’s removable so you can actually roll the chopper along. And it’s even got a handy grip for the crossbow.

Worth it? I’ve been able to get a lot of TWD figures at discounted rates in part because of my love of the show and because I appreciate the improvements McFarlane Toys has made with the line. At most stores, TWD figures will set you back about $15 and I definitely think the bike is a value priced at the same cost of a figure.

Fittingly, Daryl is the standout figure of the line so far and despite the soft likeness, the articulation and chopper combine to make this one of my favorite figures this year.

With a better likeness this would be an easy 10. If you’re a fan of The Walking Dead, this is the one figure from the line to get. 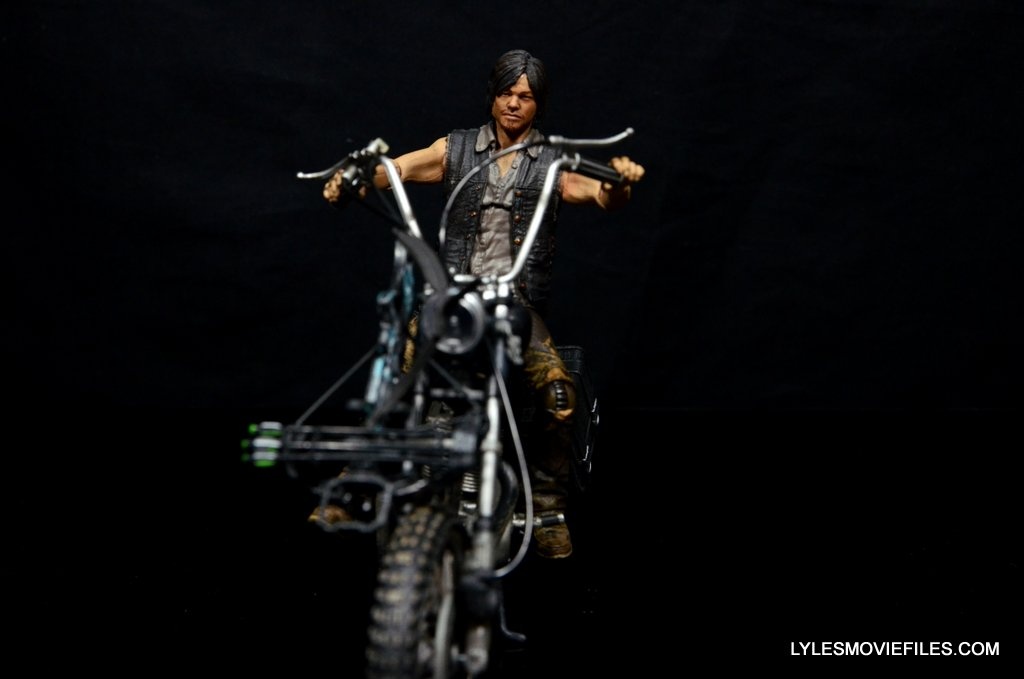 Where to get it? This set is all over from Toys R Us to specialty shops like FYE  and Amazon

Big thanks to our friends at Entertainment Earth for providing along this sample figure for review so please stop by there if you’re considering grabbing it.
Order Walking Dead Daryl Dixon Figure & Motorcycle Deluxe Box Set from Entertainment Earth!