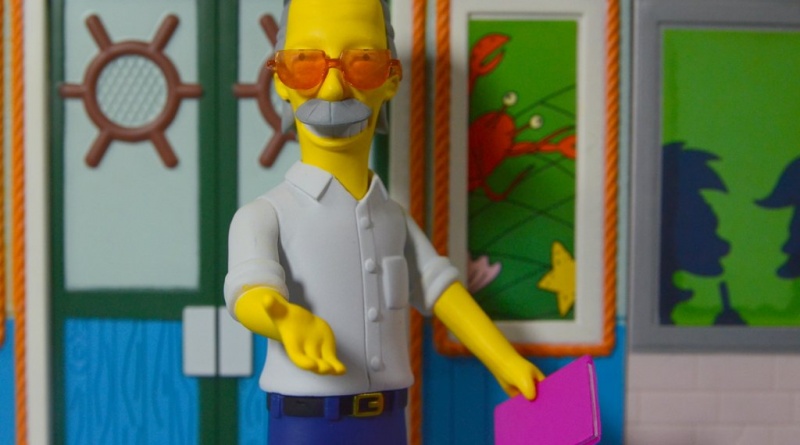 Stan “The Man” Lee has nearly become as iconic to comic book fans as the characters he co-created with the likes of Jack Kirby and Steve Ditko. His cameos have become an expected signature element of all Marvel Studios films and he remains one of the more popular attractions at comic conventions.

NECA is winding down its tremendous 25 of the Greatest Guest Stars of The Simpsons line and today, I’m taking a look at their take on Stan Lee. Let’s see if it will leave us saying “Excelsior!” 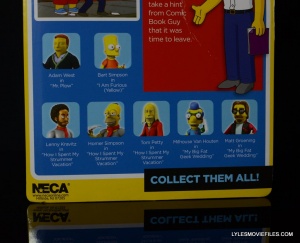 Packaging: I really like NECA’s packaging for the line. It’s simple and effective without a lot of wasted space. The red pops against the big Homer drawing and conveys that classy touch in saluting the series’ celebrity guests. And one twisty tie makes it nice and easy to free Stan from his plastic prison.

NECA sets the standard for card backs. We get several pictures from Stan’s episode complete with title and date in addition to a very informative bio. I also like the larger portraits of the figures in Wave 5, which reminds me, I still need to get Adam West, Bart, Matt Groening, Lenny Kravitz and Milhouse. The Simpsons line will definitely be in the running for figure packaging of the year for me.

Likeness: Some of the celebrities have been harder than others to convey on The Simpsons giving NECA a tough challenge for the figures, but this was a case where NECA had a great design to work with giving us one of its better celebrity Simpson figures. 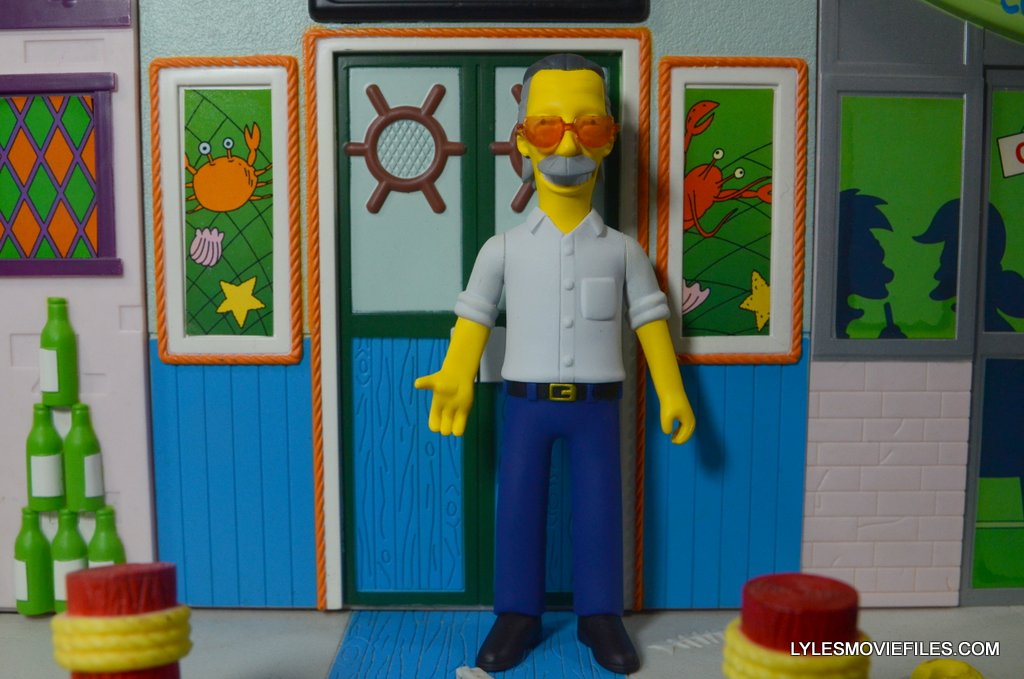 From the trademark wide Cheshire cat-like grin, bushy mustache, the wrinkles across the forehead, the slender frame to the tinted translucent glasses, this is Stan Lee. The only thing that throws the likeness off somewhat is the glasses, which are down too far on the nose as if Stan looks over them to see.

Scale: Thanks in part to his larger than life persona, I’ve always considered Stan to be fairly tall. On the show, he’s about normal height. Sadly, my Simpsons collection is still packed up so I don’t have many to compare him with, but Stan looks about right with my limited collection. 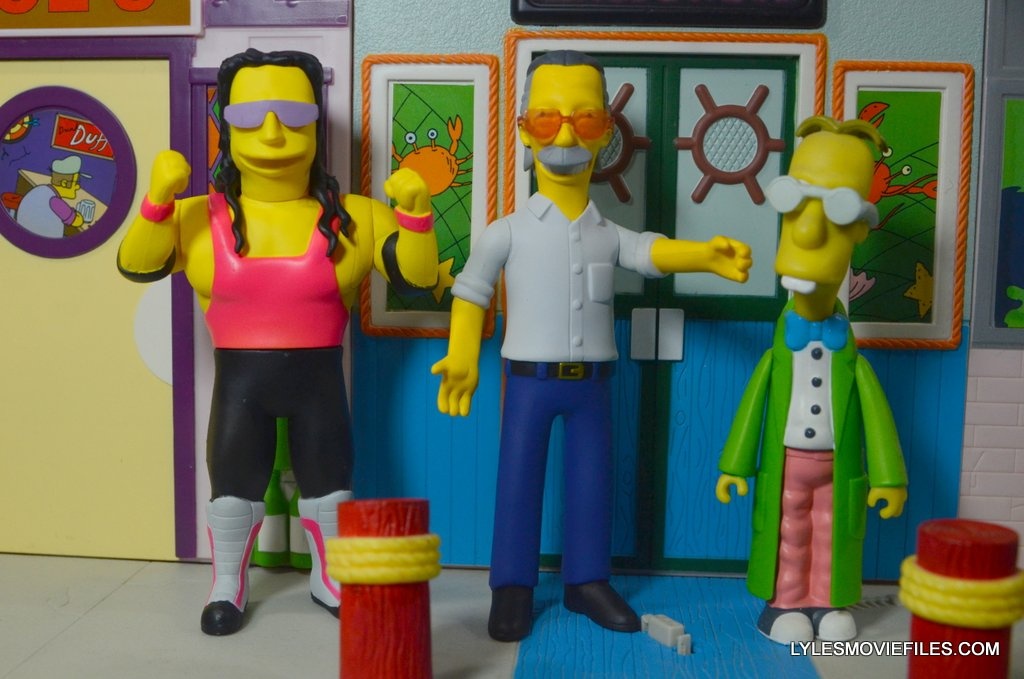 Paint: NECA seemed to be somewhat inconsistent with its yellow plastic for the skin tone. Stan features a darker hue than the near neon Bret Hart and this color looks much better.

Stan’s outfit is pretty basic, but the paintwork is on point even down to the gold belt buckle. Looking at the episode again, the shirt should be more of a brighter white instead of the off white the figure sports, but that’s my only nitpick here.

Articulation: NECA doesn’t have to go all-out with articulation for this line so we get the bare minimum here with neck, shoulders and waist. Stan’s got a gripping left hand to hold his accessory.

I really like that you can pose Stan almost exactly like the reference pics from the back package and once I unpack Comic Book Guy and the comic shop, Stan will be a permanent fixture on that set.

Accessories: I don’t completely remember if Stan was holding a book or a comic book, but he’s got it. The book fits nice and snug in his hand and you don’t have to worry about it flying out with some random movement.

Worth it? Stan Lee is such a natural addition to this line and I’m glad NECA got him in before wrapping the 25th anniversary series. With his wide appeal and Simpsons-ization, this is a great addition for any Marvel and Simpsons fan. 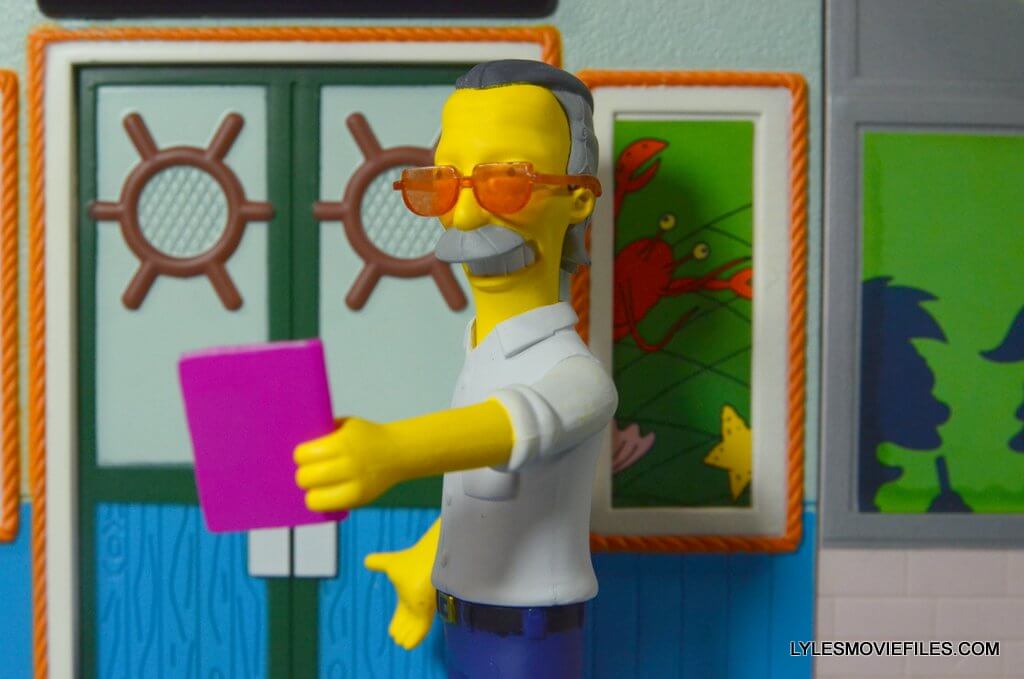 If I can figure a way to raise the glasses just a fraction higher, this excellent figure would be perfect.

Where to get it? Toys R Us and specialty stores like FYE are your best bets for these Simpsons figures at retail price. Otherwise, be prepared to cough up slightly more to get them online.