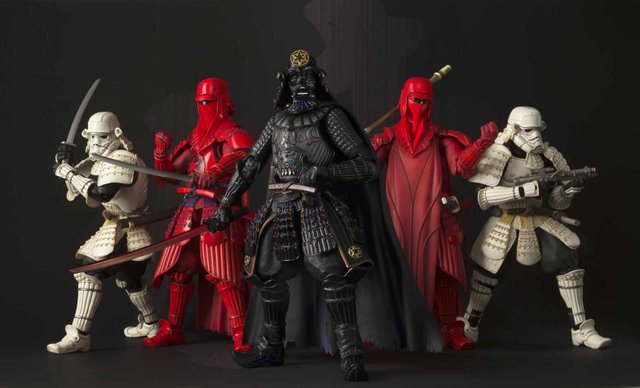 Normally, I’m not much of a hybrid guy. I like things to stay in their own niche. I don’t need steampunk DC characters or action warrior Disney princesses, but this mash-up of Star Wars and Samurai by Meisho Movie Realization line is pretty amazing.

Each figure is exquisitely crafted by some of Japan’s top sculpting talent and constructed with hybrid materials featuring up to 15 points of articulation.

In addition to his EE-3 rifle portrayed as an flint-lock style blaster, this deluxe figure set features an extensive array of accessories that includes a characteristic backpack missile that can be removed/attached, and a moveable helmet mounted scope. In addition to a short ninja-style katana and sheath, numerous ninja-style blade accessories that are also included can be subtly attached to shin and forearm area mounting points.

The Akazonae Royal Guard comes wielding not only the iconic force pike-esque staff, but a traditional Japanese-style katana as well. The front robe pieces are removable, giving the option of displaying the Guard in a samurai armor fashion. For further nuanced posing, the Akazonae Royal Guard set also includes interchangeable hands. The unique use of “wa,” Japanese style also makes for a one of a kind sculpt design that fans cannot find anywhere else.

The Royal Guard have one of the coolest visuals in all of the Star Wars mythos so I’m not surprised they got the treatment and it makes me even more curious to see how the line handles other favorites like Snowtroopers and Scout troopers.

How insanely cool is the armor’s incorporation of the Death Star?

You can order/pre-order the figures here.