If you collect Marvel or DC 6″ figures you know playset offerings are largely non-existent. That’s why I appreciate collecting wrestling figures as at least twice a year we get some great accessories to add on to the in-ring fun.

I’d grabbed the Mattel Elite Scale Ring, but Mattel hasn’t been all that interested in making complimentary accessories to it due to poor sales. Enter Wicked Cool Toys, which released its own authentic scale ring last year. WCT got collectors very excited with the reveal of authentic classic blue cage and contemporary steel cage sets. Let’s climb into the ring and see how it stacks up.

Packaging: The box is slender and you could probably miss it expecting to find a much bigger box. The front features some guy that according to the WWE doesn’t exist. It’s a simple box, but helpfully shows everything that’s included in the set.

I typically don’t hold on to boxes, but thanks to its slender size, I may hold onto it to store the cage when I’m not using it.

A set of instructions are included, but they’re not especially necessary as assembly is largely intuitive and makes sense. After all, this isn’t a Transformers Masterpiece figure. 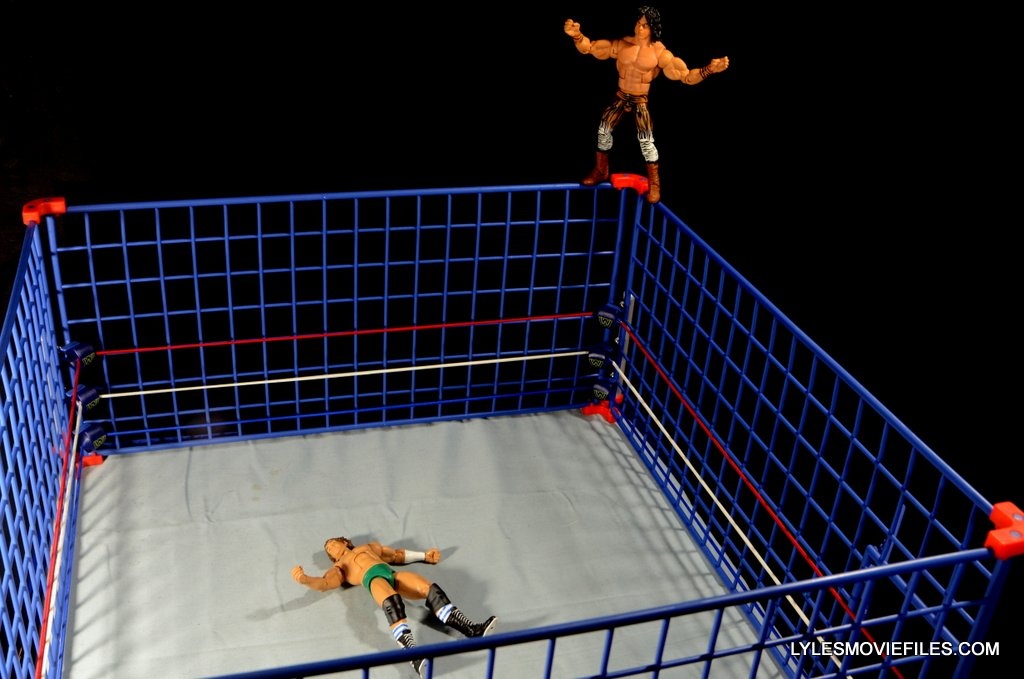 Scale: Let’s get the most important question right out of the way. If you picked up the Elite Scale Ring, but didn’t feel like plunking down $80 for the ASR, there’s no need to worry — the cage set is perfectly compatible.

I can’t stress how smart that was for WCT. They got into making larger scale rings late, but didn’t screw themselves out of potential customers by forcing them to buy their ring instead of using what’s already out there.

Interestingly, the  cage is smaller than the original Jakks classic cage. I looked around online and the cage actually should have been smaller. This new one is scaled properly and lines up fairly well with how the wrestlers appeared in the ring in real life.

The old Jakks one swallowed the figures up, but the WCT one allows you to have figures standing on the top turnbuckle and be close to escaping.

Accessories: For one giant accessory, the set does come with more than just the cage itself. All told it’s got more than 45 pieces, but if you’ve got the ESR you won’t need all of them.

You can thread the ring skirt along the ring posts and if you’re especially lazy, you don’t have to remove the RAW skirt from the ESR to do so, which I appreciated. My biggest complaint is the skirt itself looks faded and the WM logo looks washed out.

The blue turnbuckle covers will prove the most time consuming aspect of the cage setup as you’ll need to use a little force to get the pegs into the turnbuckle holes.

WCT wisely included a spare just in case you break a turnbuckle peg during assembly, but be careful and ease up when you start to see the pegs turning white from the force. I’m a little worried that over time the turnbuckles are going to wear down as they look a little too tight.

The ring steps are solid and convey the blue wood look of the originals before they became steel weapons.

Playability? The cage is nice and sturdy so you won’t have to worry about a crossbody into the cage knocking one of the cage walls down. The top and bottom fasteners ensure it will stay in nice and snug.

The cage wall slots are large enough that you can pose figures scaling the cage while the bars are thin enough that figures with an open hand can clutch it to climb the cage.

Worth it? This is a $60 cage accessory. Like all playsets, it’s not cheap, but the price seems fair given the ability to transform a modern ring into a classic one and set up a steel cage. If you’ve got the scale ring and were an 80s WWF fan, I can’t imagine why you wouldn’t want it.

I’m taking a half point for the faded ring skirt. The turnbuckles worry me a little, but this is a solid playset accessory and a welcome one for old school fans. 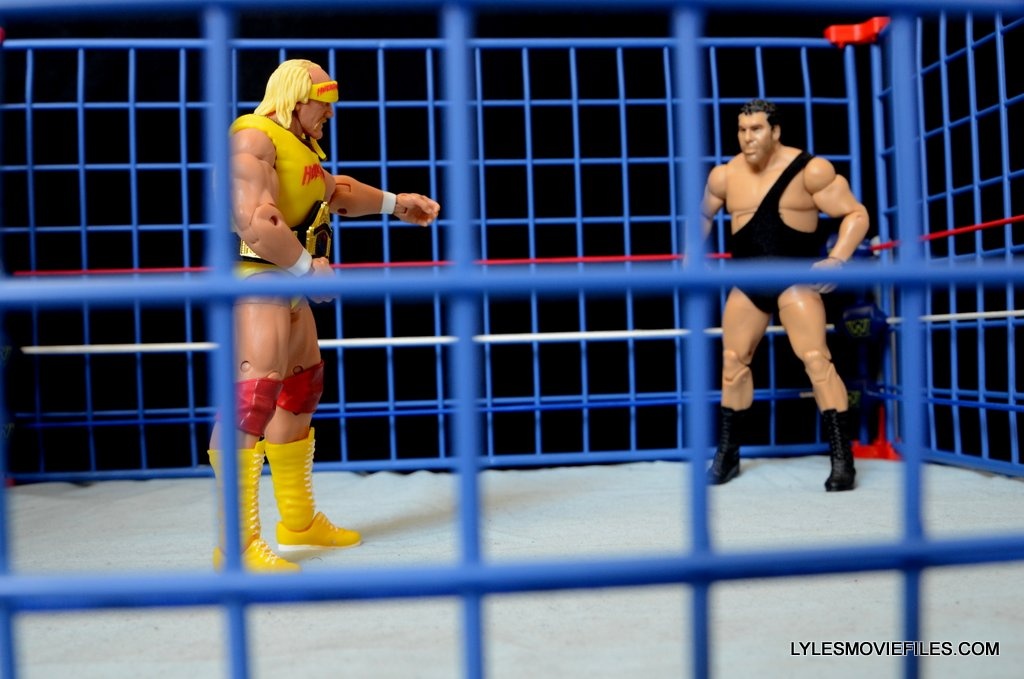 Where to get it? The price tag makes it a bit too prohibitive for places like Target and Wal-Mart to carry it so your best bet is to grab it at Toys R Us.