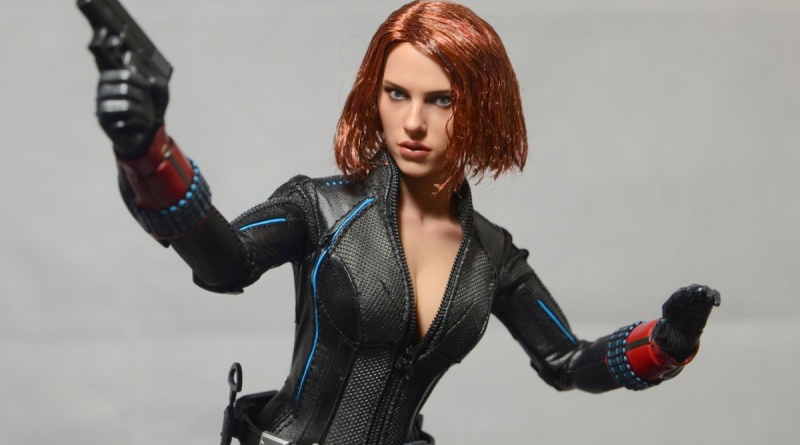 Without a doubt one of my favorite films this year was “Avengers: Age of Ultron.” I am anxiously awaiting its arrival on Blu-Ray so I can watch it over and over.

Hot Toys is already underway with releasing its AOU 12″ figures starting with Iron Man, Captain America, War Machine and now the Black Widow. Despite being pregnant during shooting, Scarlett Johansson’s character once again didn’t take a backseat to her male counterparts and factored into many of the film’s best moments. Let’s see if the figure is equally as memorable.

Packaging: Unlike the original Avengers’ line, Hot Toys opts for a more subdued outer box package with a smaller font to offset the red orange cover.

As usual, the outer box features a large action portrait of the respective character. A big ‘A’ overlaps the portrait to ensure collectors know this is part of the Age of Ultron line. I like the more dynamic colors here as opposed to the first film packaging that was largely more muted, subdued colors.

Likeness: This is the fourth Black Widow we’ve gotten counting the Iron Man 2, Marvel’s The Avengers and Captain America: Winter Soldier versions. It’s a toss up between which of the two Avengers’ head sculpts are the best, but AOU version has a bit more personality than the constantly peeved off look of the Avengers version. 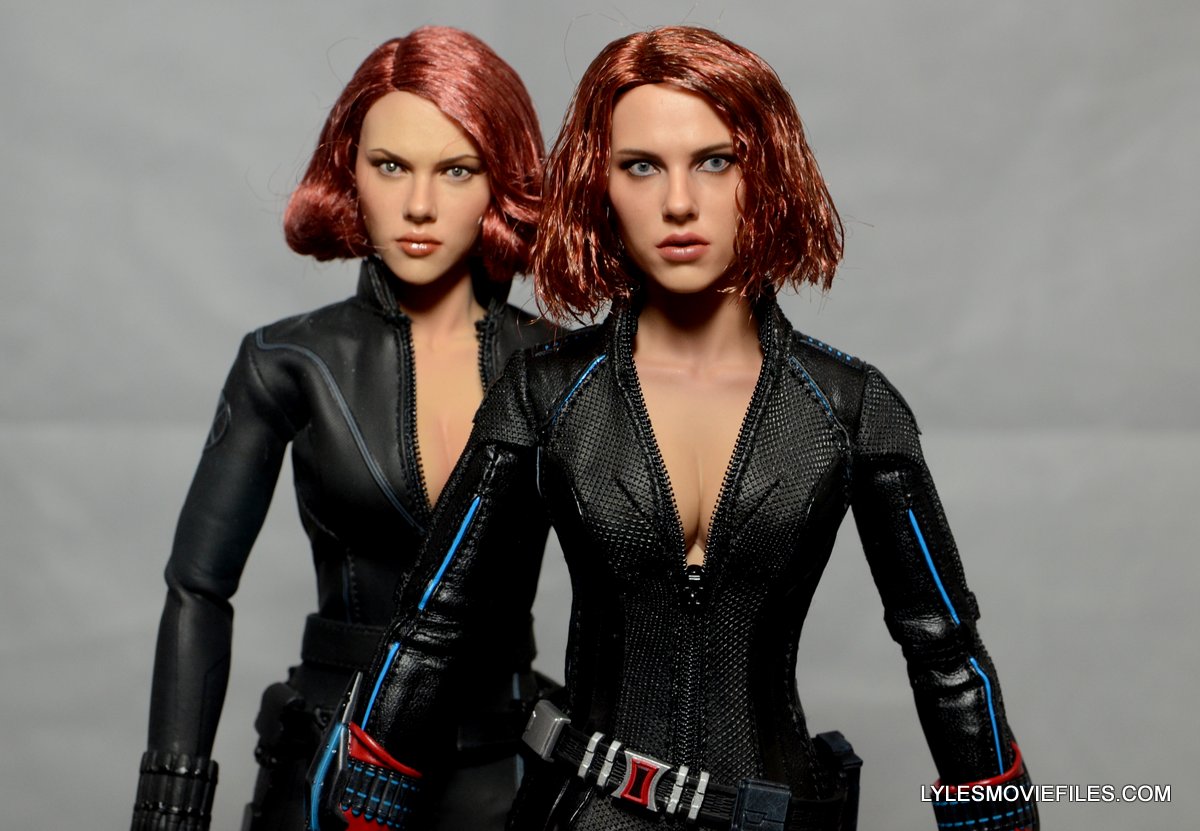 As we’ve come to expect from Hot Toys, there’s no mistaking Johansson with the figure from the slightly pouty lips to the piercing eyes.

Hair: To capture Johansson’s shorter, layered look, Hot Toys once again goes with rooted hair. It looks impressive as it really adds to the shrunken down Johansson effect, which you wouldn’t quite get with plastic hair, but it’s not a direct match for how Johansson’s hair actually was in the film. 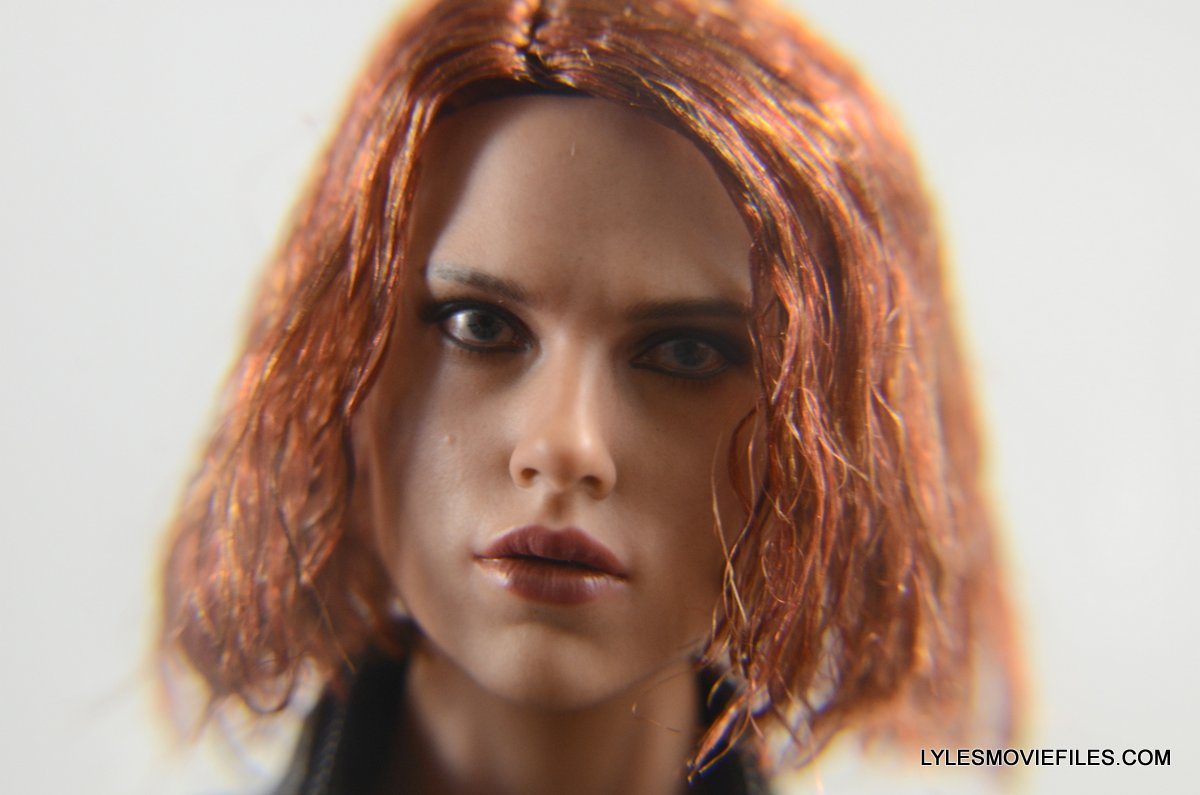 I’ve had absolutely no complaints with The Avengers version Black Widow and her rooted hair, but I’m a little worried about this version.

Hot Toys suggests using some hair styling gel to keep the hair maintained. They weren’t kidding as I was dealing with some serious hair frazzle issues during the photo shoot and I’m concerned that will be a problem later on. 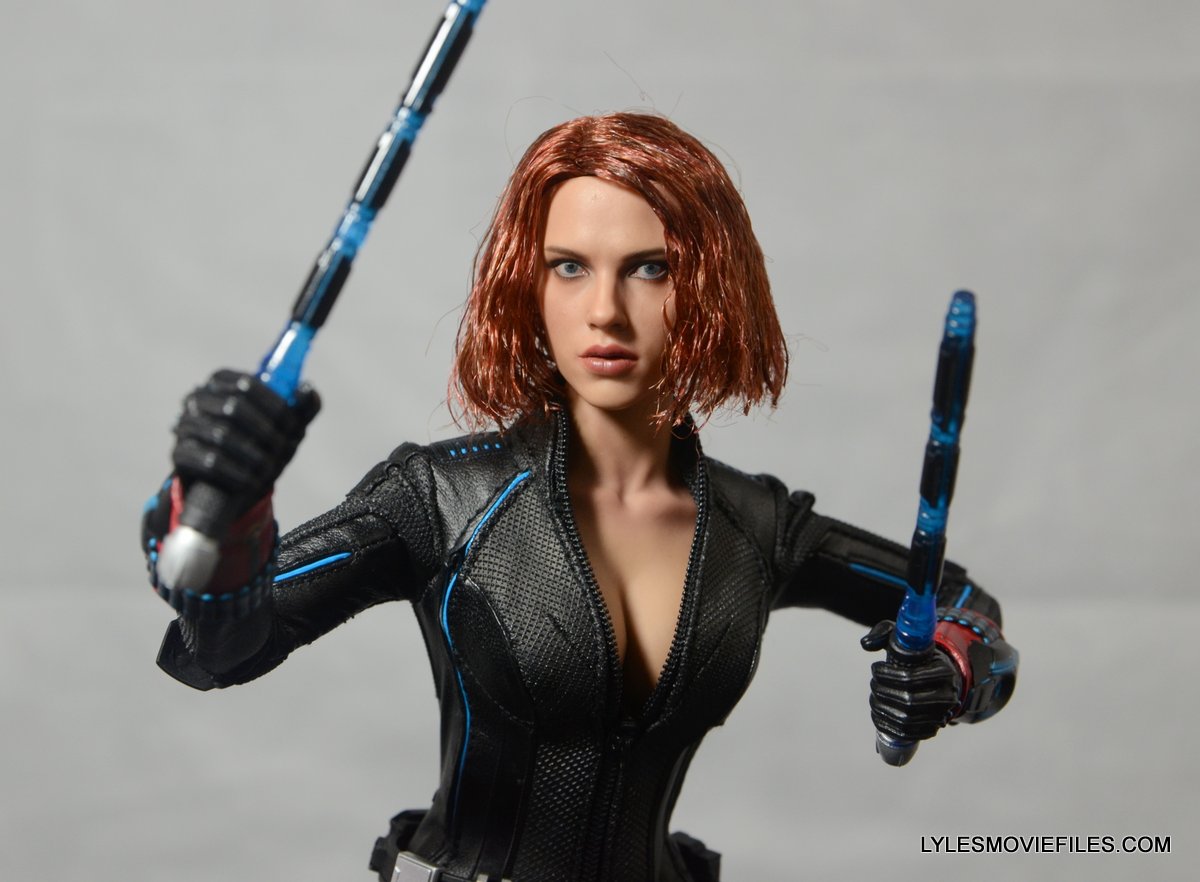 Paint: Hot Toys again proves unrivaled on the painting front thanks to its always top-notch work. Look close and you’ll notice Hot Toys even got the eye liner down and Widow’s boots sport some a lightly brushed effect to hint Widow hasn’t bothered to clean them in between missions. I really dig little touches like that and it helps cushion the blow of the costs to see even the smallest details are accounted for and added to the figure. 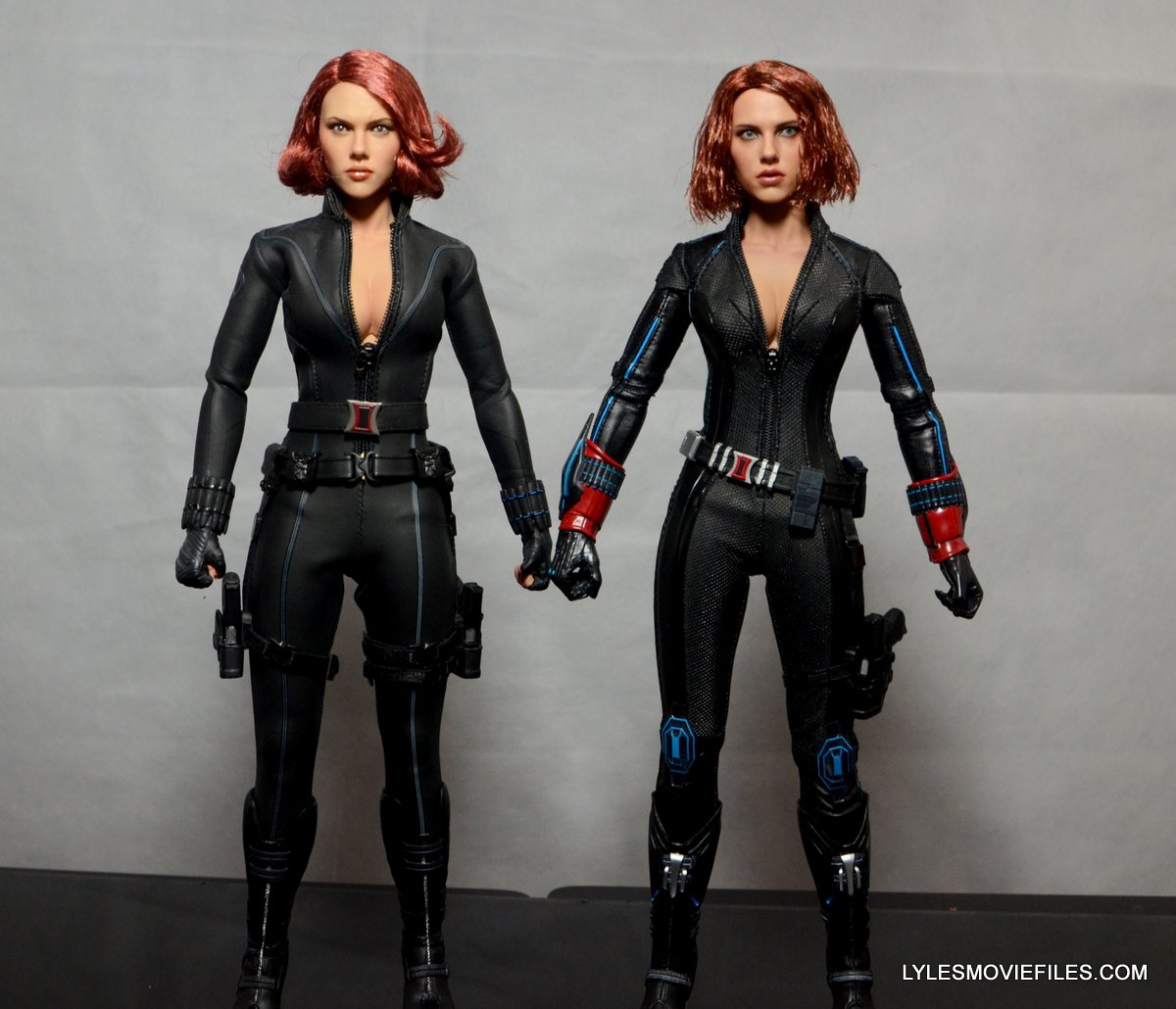 Outfit: This version of Widow’s costume is a lot busier than the standard SHIELD outfit she wore in the first film. There’s a lot of panels and segments Hot Toys had to cover, but this seems to be an exact replica of the film version.

The outfit’s piping colors helps to break up the black spandex and the black leather-esque material. The colors pop as well so there’s no question this is a more advanced attire than any other Black Widows you might have on your shelf.

The elbow and kneepads have a little give to them so be aware as they are attached via straps in addition to being connected directly to the outfit itself. The zipper in the front works fine so you can have Widow as conservative as you like.

Poseability: Widow outfit is snug especially around the shoulders and arms. It won’t hinder many poses, but they won’t stay particularly long if you’re too creative with how you set her up. 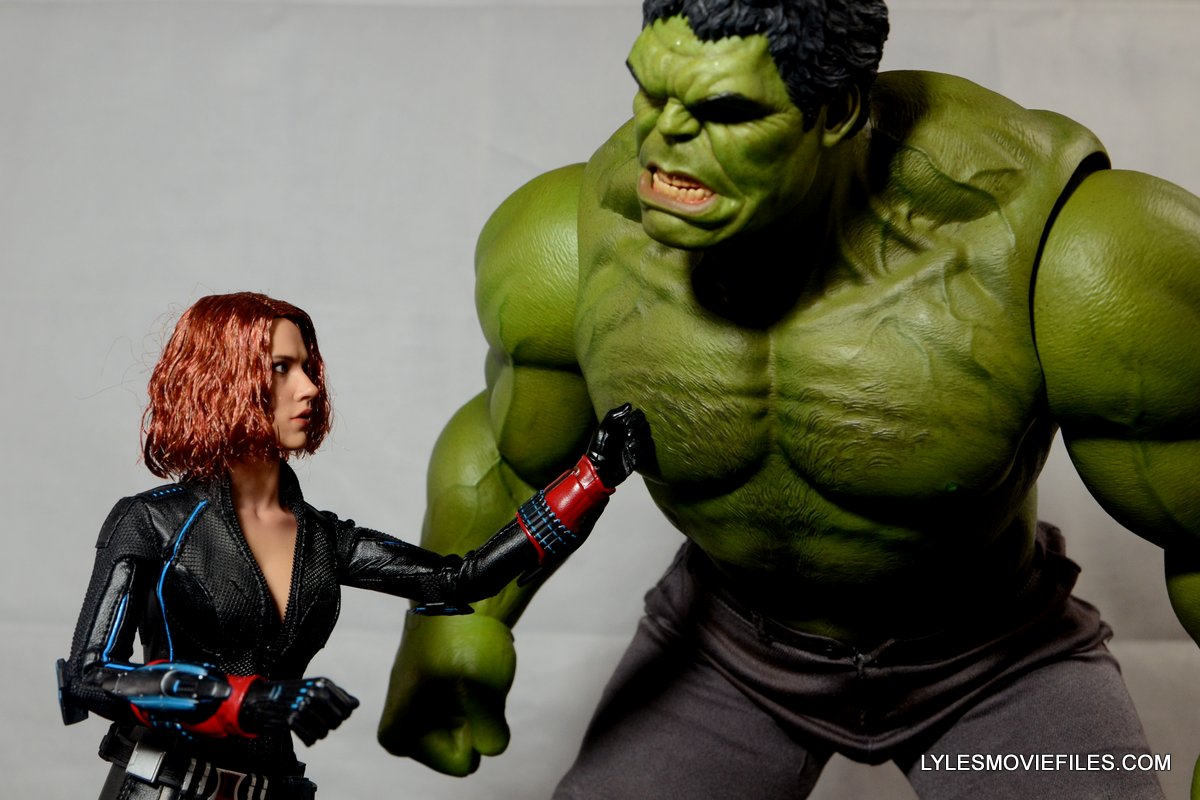 Accessories: This was the one category I assumed Widow was going to come up fairly short and was blown away by her all-out arsenal.  In addition to the standard three sets of hands and a stand, Widow comes with: 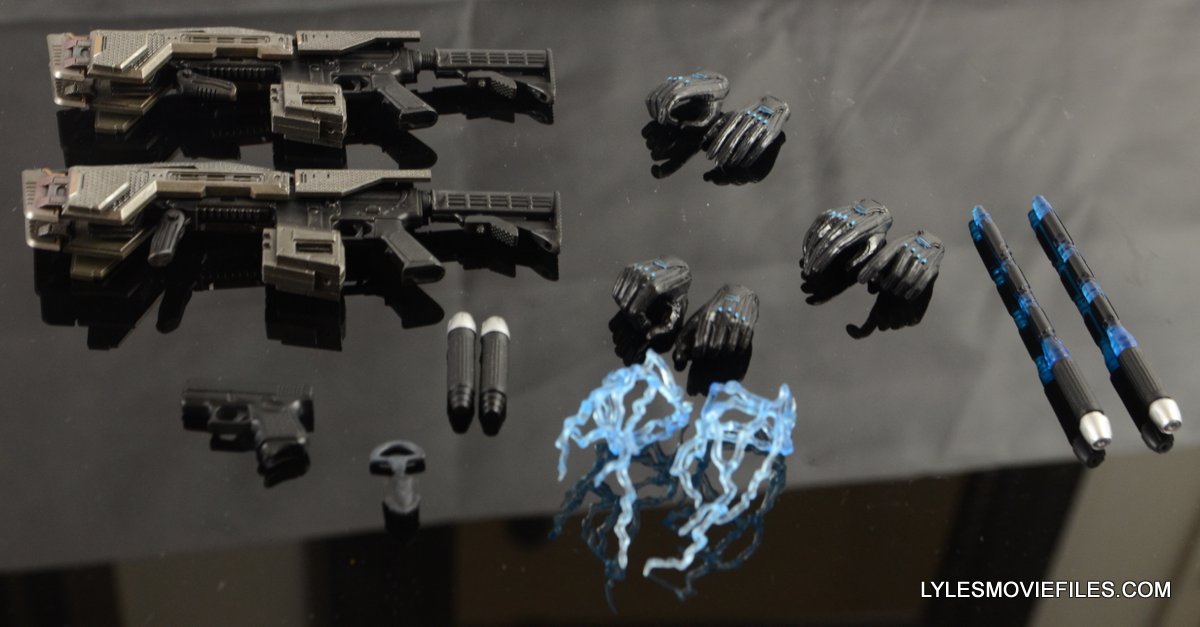 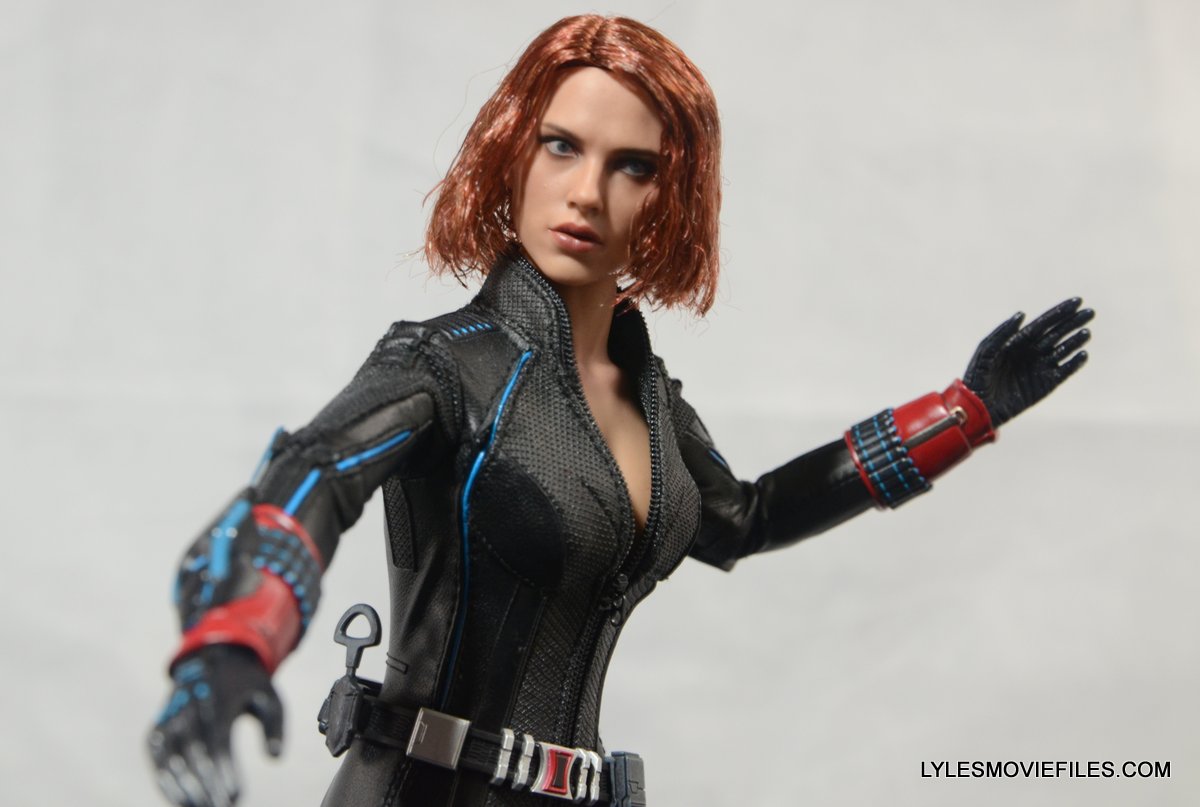 The dagger is going to be one of those accessories that’s nice to look at, but if you’re going to pose the figure much you’ll probably want to superglue it on as it’s a prime candidate to get lost never to be seen again.  Despite the gauntlets, I had much less trouble swapping the hands back and forth, which I assumed was going to be a nightmare again.

Beyond my own just wanting to watch the film repeatedly, I really am curious about all the weapons Widow used as I don’t remember her fighting with anything besides her basic sidearm pistol, her widow’s sting and the two batons.

Either way, the arsenal is impressive. It’s kinda cool for Widow to be more than capable of gunning down a few hundred Ultron drones with the big blasters, which fit perfectly in her hands to line up just right with the triggers.

The electric shock effects are fun to use whether on the batons or around Widow’s gauntlets. Since I like that Widow doesn’t have a complex fighting alongside her teammates, I’m most likely going to have her on display with just the batons.

Worth it? At $230 (after shipping), Black Widow isn’t a cheap impulse buy, but the quality of the figure really jumps out once you start posing her and lining her up next to her fellow Avengers. 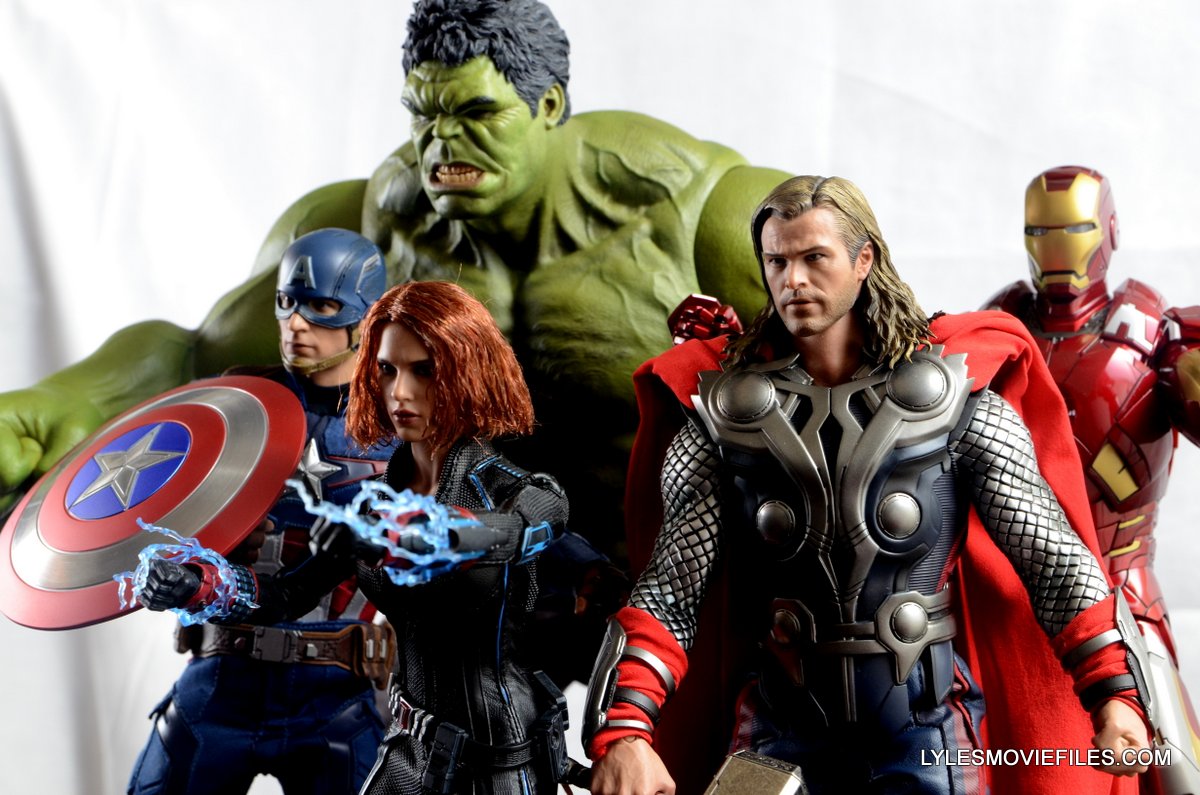 I don’t know if you absolutely have to get this version if you’ve already got either the Avengers or Winter Soldier one, but I like the distinction of having a more colorful outfit when she’s palling around with her Avengers buddies and a more reserved, black outfit when she’s on SHIELD missions. 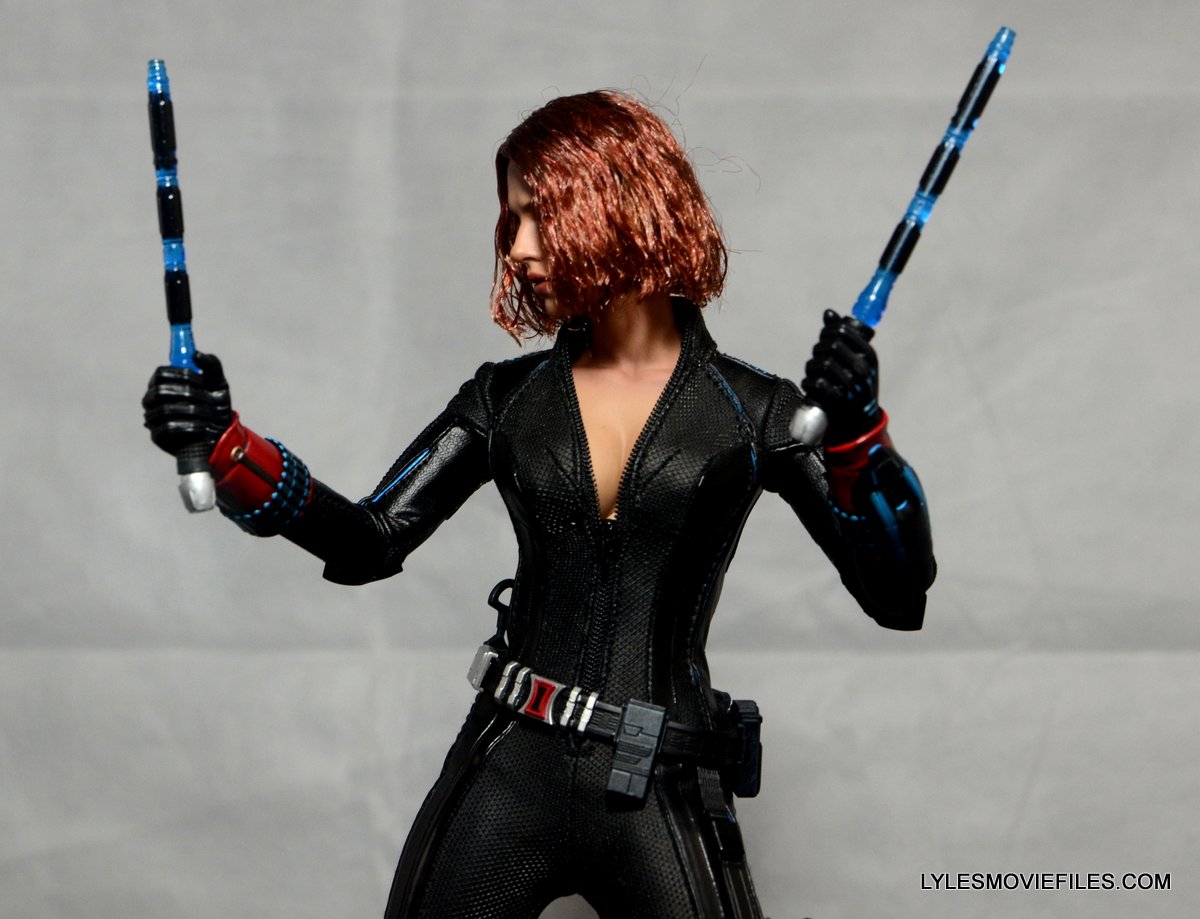 The execution of the hair and its maintenance is the only concern I have with the figure. Otherwise, this is a great addition to your Avengers: Age of Ultron collection. Hot Toys packed in more accessories than I was expecting and delivered another exceptional knockout. If you’ve yet to jump on the Hot Toys bandwagon, this is a perfect time to get hooked.

Where to get it? Like all Hot Toys figures, your best bet is to grab them online. I’d greatly appreciate it if you use site partner Sideshow Collectibles via this link as Sideshow will kick back a portion of your purchase to help me keep the site running: Marvel Black Widow Marvel Sixth Scale Figure 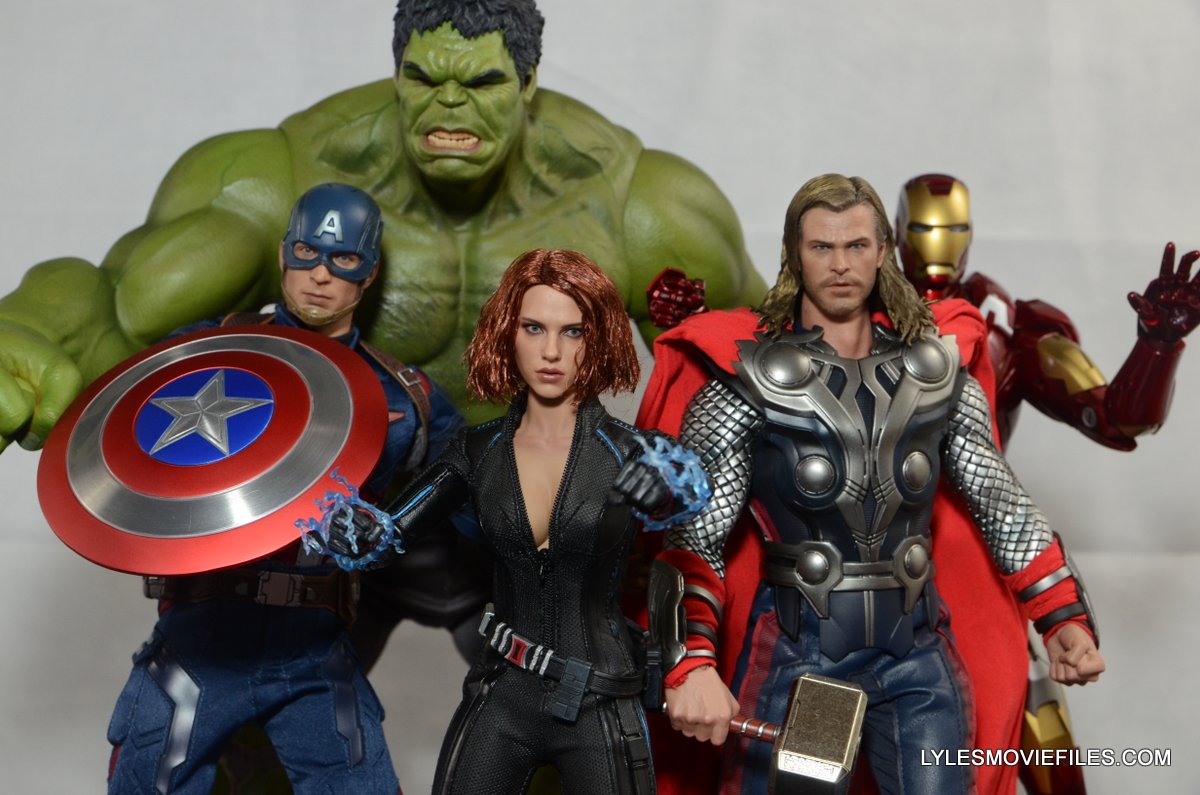 Thanks to Sideshow Collectibles for providing the figure for review!