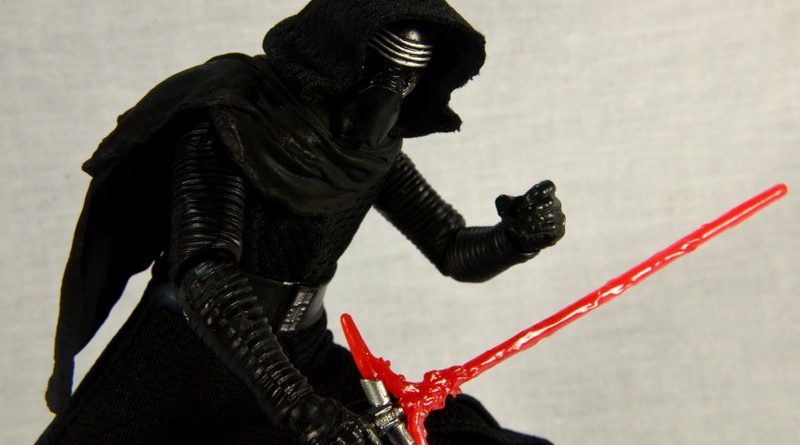 In my happily spoiler-free zone of all things Star Wars: The Force Awakens, I’ve got no clue what the deal is Kylo Ren, but I’m pretty sure we can all agree he is the one character that’s grabbed everyone’s attention. Is he a Sith Lord? Is his all black attire a tribute to Darth Vader? How did he make that wicked lightsaber?

For that information, we’ll have to wait until Dec. 18, but Hasbro released the mysterious man in black with the first wave of Star Wars Black Series Force Awakens figures and predictably, he’s been the most in demand of the set.

Packaging: Like the others in this revamped Star Wars Black Series line, Kylo is packed in a spiffy black and red color scheme box. Given his colors and at least homage to the Sith, the colors seem even more appropriate for him.


Kylo is posed holding his lightsaber and ready to go traipsing through the snow-covered woods in search of his prey.

I appreciate Hasbro keeping us in the dark with the vague bio summary on the back so we can watch the movie and learn about the characters instead of reading everything before the film comes out. I do wish the portrait in the back was lighter so it was more visible.

Likeness: Looking at the few available reference pictures available, this looks to be one of the better SWB figures. Kylo’s mouthpiece has all the little dents and cracks while the visor portion has all the intricate detail work.

The figure appears to capture the Kylo’s slender build and Hasbro nailed the hood, which is something that’s given them trouble in the past with figures like The Emperor. 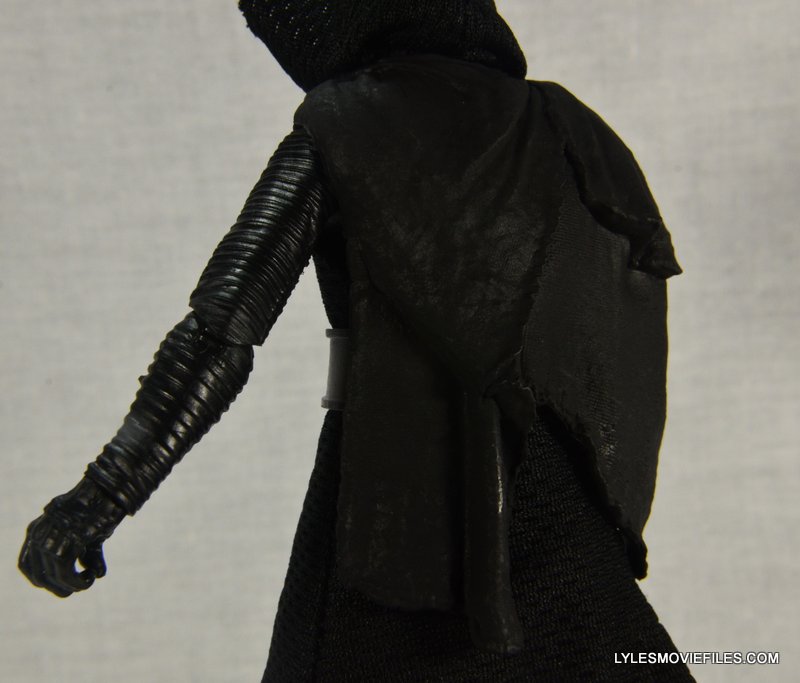 Hasbro used some plastic pieces to help keep the attire in place. The plastic/cloth combo doesn’t always work, but I like how it’s handled here so Kylo’s cloak and hood don’t come off looking goofy. It’s not the ideal solution as it definitely looks like separate pieces instead of one  big cloak, but it’s effective.

Scale: Adam Driver, who plays Kylo Ren, is 6’2″ so his figure should be taller than most of the figures in the line save the impressive Captain Phasma. 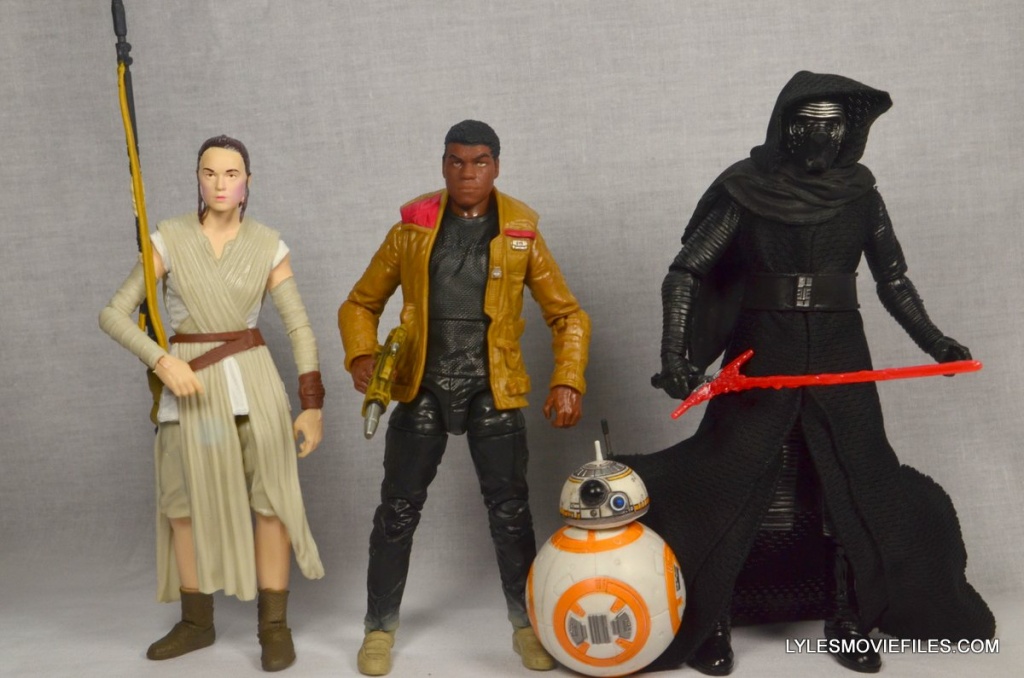 Paint: With his overly simple color scheme, paint isn’t a major issue for Kylo, but the visor portion has all the appropriate black accents outlined. The belt buckle also has a nice shine to it as well.

Articulation:  The plastic parts, including the secondary skirt, don’t hinder the articulation at all as Hasbro utilized a soft plastic with plenty of give. 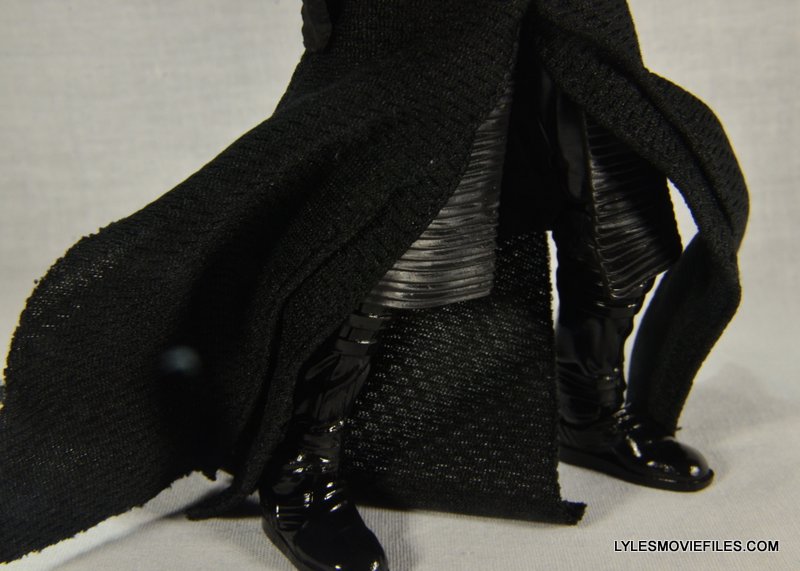 Kylo has side to side neck articulation, hinge shoulders, elbow swivels, wrist, waist, hips, double-knee, ankle and foot. Without knowing how Kylo should move just yet, this looks to capture all of his necessary movements.

Accessories:  Kylo comes with one accessory — his wicked lightsaber. It’s actually got a black wash, which gives it an appearance that this isn’t a typical lightsaber.

Maybe Kylo’s lightsaber building technique is a little rough and his hilts don’t last very long? I love having all these unanswered questions. The execution of the saber is off as the three ignited portions don’t connect, but Hasbro did sculpt the energy affects to illustrate this isn’t a pure uninterrupted beam of energy like the standard lightsaber.

Worth it? The Star Wars Black Series is going to run you $20. It’s not the same deal as Hasbro’s Marvel Legends line, which also includes a  Build-a-Figure and frequently other accessories. We’ll chalk the discrepancy to the cost of having this major license. The price tag is normal, but it’s not the max value you get from a Marvel Legends figure. 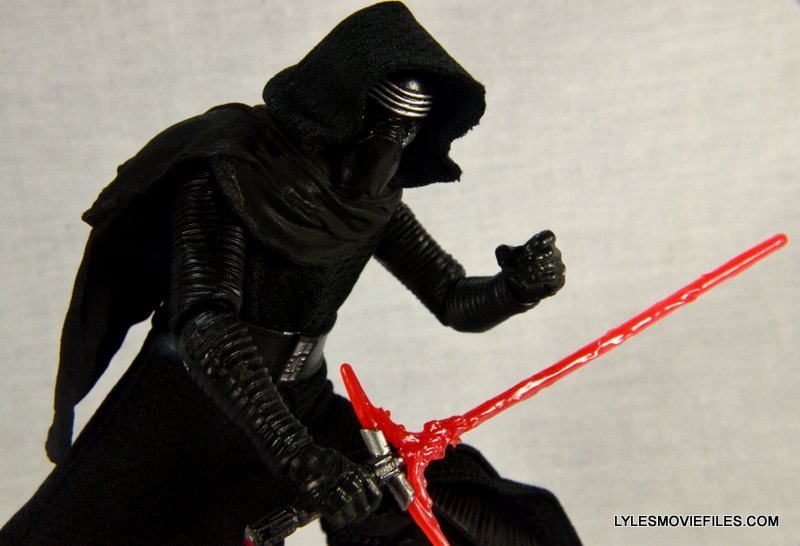 Plastic/cloth combo aesthetics aside, this is an impressive figure. Kylo Ren is the one everyone is looking for and Hasbro delivers a top-notch effort and I certainly didn’t have any buyer’s remorse with a figure I’ve had a hard time putting down since I opened him.

Where to get it? Force Awakens figures are a hot commodity and don’t last long on the shelves, but you can find them at Toys R Us and Target. 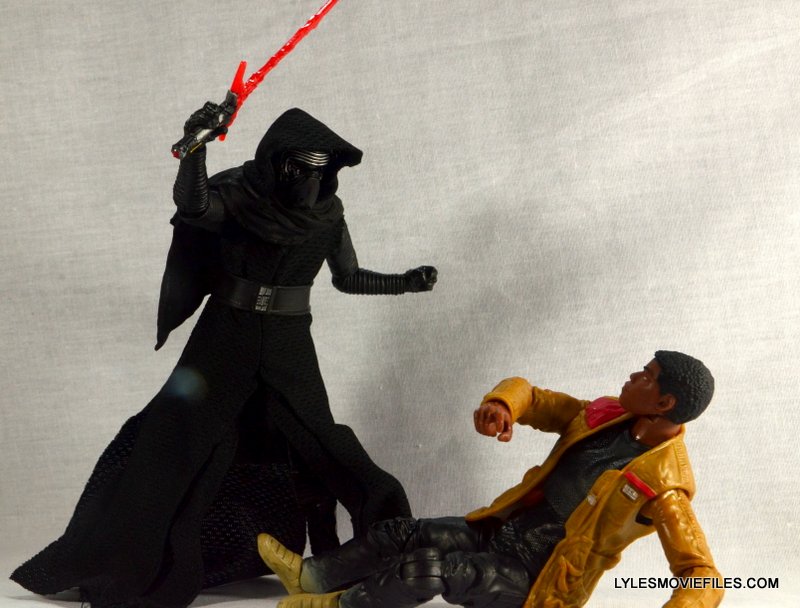 Amazon.com has been hit or miss with having him in stock. Currently he’s out of stock, but you can use this link to purchase when he does return: Star Wars The Black Series 6-Inch Kylo Ren