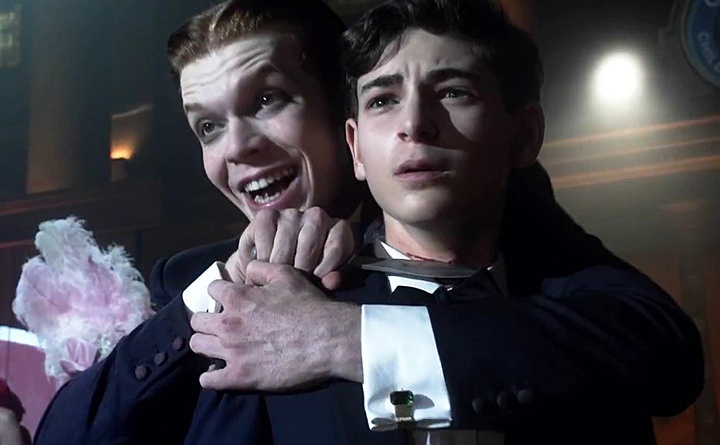 Tonight’s episode definitely answered the question of Jerome’s connection to The Joker and if we’d been watching the origins of Batman’s arch-enemy in season 2. But I’m pretty sure like me, most viewers won’t like the answer.

Theo (James Frain) is preparing his master plan of becoming Gotham’s savior. Sister Tabitha meanwhile is enjoying some quality time with Barbara. Theo has a a pretty ingenious plan as far as show villains strategies go even if Theo is relying on a bunch of loose cannons to pull it off successfully. And vying with Tabitha for Barbara’s affections probably won’t end up a wise move either. 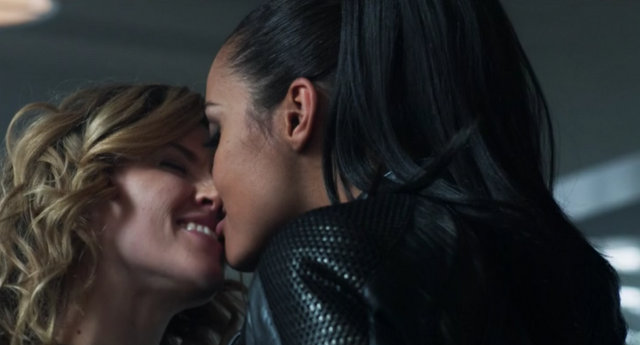 Following the fallout from last episode, where apparently only 10 officers were killed instead of the whole force save Nygma, Kringle and Lee, Gordon is rallying the troops to (lawfully) avenge their department brothers’ deaths.

I’m convinced now that Gotham’s taxpayers would be far better off just buying Gordon a mechanical bat suit and be done with it since no one on the department save Bullock is even remotely competent besides Gordon.

Gordon’s attempts to get lost in his work haven’t gone unnoticed by Lee, who wants him to attend the children’s hospital gala. To seal the deal, she tells him there’s going to be a magician.

Rather than have a moment’s reprieve with his hot girlfriend, Gordon brushes her off to continue investigating leads on Jerome. The biggest leads he and Bullock to Jerome’s father, the blind fortune teller back from Episode 16.

Per the norm even for Super Detective and his Grumpy Sidekick, the GCPD remains two steps behind any crook so Jerome and Tabitha get to Mr. Cicero. Jerome litters his dear old dad’s apartment with evidence linking him to the Arkham prisoners’ escape.

When Cicero rightfully questions how Jerome thinks this plan could possibly work, Jerome explains cops are stupid. And you know, considering the GCPD, he’s not necessarily wrong.

Gordon and Bullock arrive before Jerome and Tabitha finish, but Jerome leaves them with a present — Cicero murdered ironically with a knife thrust through his eye and fear gas to momentarily paralyze Bullock. Gordon gets a whiff as well, but he’s able to fight it off long enough to collar Jerome.

The show remains frustrating by not sticking to its established rules of Jerome’s craziness and basic common sense. Instead of killing the only two competent cops on the force, Jerome and Tabitha simply leave them knocked out. Keep in mind this is the same Jerome who killed Essen for headbutting him last week.

At the gala, the writers get to revisit their favorite homage to the old Batman films as a dressed up Bruce has another awkward exchange with Selina in a shot out to Batman Returns.

Alfred is less preoccupied with Master Bruce than normal as he’s putting his A-game to use in trying to ask Lee out. These are the rarely seen, but interesting character interactions the show should delve into much more than the umpteenth Bruce and Selina encounter.

With all the build-up for the magician, I was hoping we’d get a rare Gotham reference to another DC character — Zatara — one of the few members of the DC universe who wouldn’t be out of place as an adult around young Bruce Wayne.

Instead, it’s just a disguised Jerome and Barbara is playing his lovely assistant. I’m amazed at the writers’ restraint in not having Jerome and Barbara simply be clowns for the gala to make the Joker and Harley Quinn teases even more on the nose. Despite the mask, Lee seems to recognize Barbara.  I suppose it’s hard to forget someone that comes thisclose from killing you?

For his first trick, Jerome calls up Bruce surely sending Twitter a chirping with tweets OMGing about the first interaction of Batman and The Joker on Gotham. There was actually some good tension in this moment. You knew nothing could happen to Bruce, but this was one of the rare times in the show there was a moment of doubt.

With one trick down, Jerome calls up the vice-mayor for some knife throwing. In setting up the trick, Barbara temporarily loses her mask and winks at Lee.  Smartly, Lee immediately calls Gordon and tells him Barbara and Jerome are there, but gets chloroformed in the one moment Alfred wasn’t all in her personal space.

Sadly, all that nicely established build-up with Bruce gets trashed for another shocking murder and Jerome informs the crowd no one’s leaving alive. Alfred battles one of Jerome’s goons long enough for Bruce to get away, but he freezes until he sees Selina.

Selina’s found a way out, but Bruce now remembers he left Alfred and wants to go back for him. Hard to blame Selina for not bothering to stick around.

With a camera crew capturing his hostage situation, Jerome is holding court again like he did at the police station when Theo confronts him and says the people of Gotham won’t stand for this anymore. The setup is good, but Theo is so terribly over the top here as if the showrunners didn’t trust the viewers would remember he’s the main villain of this season if Frain didn’t completely ham it up.  Barbara knocks him out for his “heroic” effort.

Gordon arrives on the scene, but now has trouble getting officers willing to go in with him to take down Jerome. The GCPD are the most bizarrely inconsistently written characters on the show. One moment they’re all rah rah Gordon and the next they’re cowering at the thought of doing their job. Aside from their general uselessness and cowardice, how ridiculous is it for a police officer not to want to get payback on the crooks who killed their friends let alone try and help end a hostage situation?

Jerome is ready for his next victim and calls out Bruce. With Bruce surveying the scene in a cool bit of foreshadowing of a vintage Batman stake-out, Jerome wants to kill Alfred since Bruce is nowhere to be found.

Gordon arrives via Selina’s escape route and alongside Alfred, the two-man crime-fighting team takes down Jerome’s crew. Again, this begs the question why there is a police force if they’re all incompetent and incapable of doing anything like Gordon? It was cool watching Alfred in action though.

Before he can make his escape, Jerome is stopped by Theo, who stabs him in the throat and killing Joker Option #1. Three episodes in to Season 2 and we’ve already seen two fairly important characters get killed.

The season hasn’t had enough time to breathe yet so it feels way too early to keep piling on the body count. In Jerome’s case especially his death was something that would have had far more meaning later on in the season.

While Gordon is wrapping things up at the gala, the writers couldn’t resist checking in on Penguin for his obligatory needless cameo. Bullock comes by warning Penguin not to screw with Gordon. I appreciate Bullock having Gordon’s back, but the bull in a China shop is hardly Bullock’s normal method of dealing with crooks.

In easily the best moment of the episode, Bruce, Alfred, Gordon and Lee are collecting themselves and Alfred gets back in to setting up a date with Lee. Gordon gives him the eye and motions for Bruce to get him out of there. Bruce gets it and beckons Alfred along just as he looks back to see Lee kissing Gordon. The show is capable of these organic interactions and I’m hoping we see more of that as the season progresses.

Turning from my favorite to easily the worst of the episode and maybe of the series thus far. Jerome is dead laid in the morgue with a fixed grin on his face as news reports show footage of his crime spree and throughout Gotham, random citizens begin mimicking his laugh hinting that any of these guys could be the real Joker.

Worse, two of the viewers uncontrollably start laughing and kill a bum before they start stabbing each other. Pretty sure the news didn’t show some viral form of Smilex. So The Joker essentially started because one guy had a crazy contagious laugh? Ugh. Please do better “Gotham.”

Killing off the young season’s most intriguing character doesn’t seem like the best direction. The continued cowardice of the GCPD and the tease of The Joker’s origin made for a rough viewing experience this week. Hopefully the arrival of Essen’s successor will get things back on track.