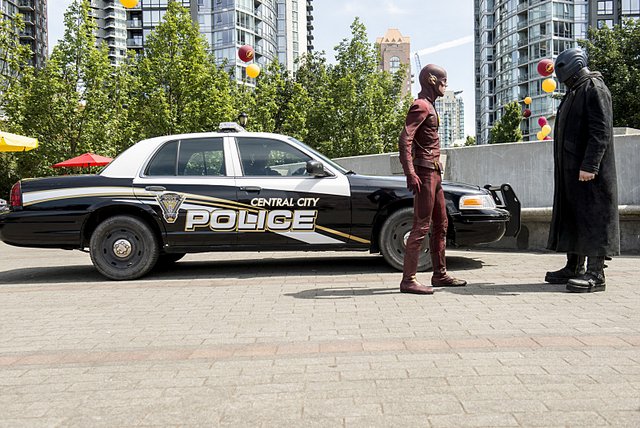 Tonight’s premiere episode of Season 2 proved the freshman outing wasn’t a fluke. The Flash quickly raced back to the top of the heap as the most exciting and enjoyable comic book show on TV.

All the elements that made the first season such a refreshingly bright and optimistic entry into the superhero TV entries were back on display tonight with an ending that has me already impatiently waiting for next week.

We start off not with the continuation of the season finale cliffhanger with The Flash trying to stop the singularity from wiping out Central City, but Barry defeating The Rogues (Captain Cold and Heat Wave) with an assist from Firestorm. Quickly, this feel good moment seems a little too good as Barry celebrates with Team Flash, Eddie and Harrison Wells??? Ah, it was just a wistful thought from Barry as he’s alone at STAR Labs considering how great things could have been instead of the reality he’s enduring today. 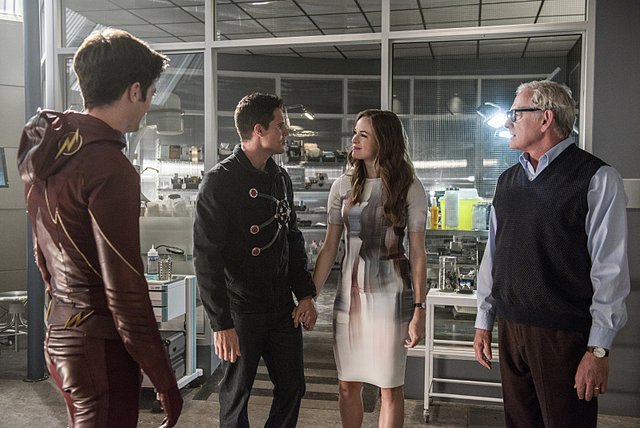 It was a nice touch to have an unusually morose Barry narrate his opening spiel explaining how he no longer wants to put those he loves at risk and has gone on his own. It’s such a page out of his pal Oliver Queen’s playbook, but being the brooding loner isn’t a good look for our favorite Scarlet Speedster.

While Barry harbors some serious survivor’s guilt and burning off his restless energy repairing structures damaged from the singularity, the rest of Central City is set to honor its hero with a Flash Day celebration. Here again, “The Flash” sets itself apart from the normal TV superhero conventions by having The Flash celebrated, not hunted as an above the law vigilante.

With Barry disbanding Team Flash, the others are doing their best to manage while trying to give him some much needed space. Cisco is assisting Joe on a meta-human task force to better equip them for super villains like The Rogues. Caitlin is working at Mercury Labs and apparently having little contact with her old gang. Iris has reached the point where she’s ready to end Barry’s extended time out.

Wells gave Barry STAR Labs in his will and has a video message delivered for Barry’s eyes only. Barry wants no parts of the message however. 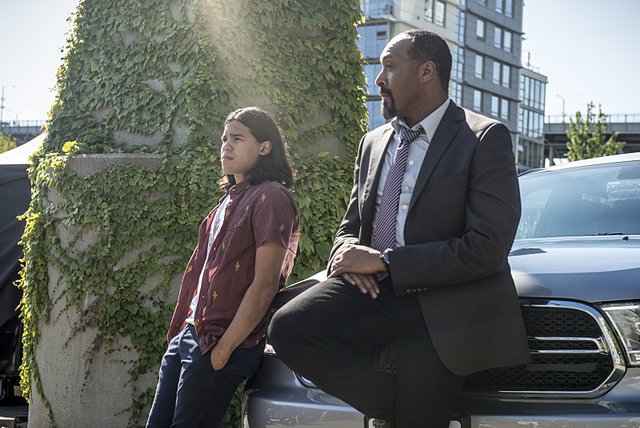 Barry hardly feels worthy of the city’s adulation since he wasn’t the hero that saved Central City — it was Ronnie. Now we flashback to the big event. While Flash was focused on reversing the singularity, it needed an energy boost to fully reverse prompting the newly married Ronnie to merge with Prof. Stein as Firestorm. Stein theorized separating in the midst of the vortex would provide the necessary spark.

Post-explosion, Flash only sees Stein with Ronnie nowhere in sight leaving Caitlin to mourn Ronnie yet again. I’m hoping that’s not Caitlin’s big storyline for a second season as she’s far more interesting when she’s not reflecting on her old flame. Pun intended.

After a little convincing from Iris, Barry does decide to attend the Flash Day celebration. This is a nice prelude to the presumed eventual introduction of the Flash Museum, a staple in the comics.

The celebration gets interrupted by an attack from a masked man (Adam Copeland aka former WWE superstar Edge) intent on killing Flash. The assailant is actually Atom Smasher, a hero in the old DC universe and a dead-ringer for the very dead Al Rothstein, whose body Barry and Joe discovered a day ago. Cisco has a vision of Atom Smasher, but he can’t place it. 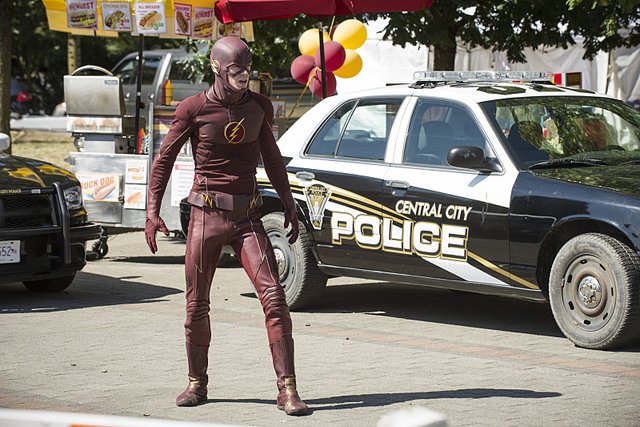 In another noticeable display of the series’ increased budget, Atom Smasher actually uses his comic ability to increase his size and it actually looks pretty convincing. I’m now sold on this looking perfectly fine for the big screen and “demand” to see Giant Man/Goliath in Ant-Man’s next Marvel Cinematic Universe appearance.

With an assist from Joe, Flash battles Atom Smasher to a draw and he retreats. Using that as enough incentive that Barry needs his friends to stop walking on eggshells around him, Iris assembles Cisco, Prof. Stein and Joe back at STAR Labs.

Sorry, Barry. Nobody’s got any time for a brooding hero not named Arrow. Stein dubs the villain Atom Smasher and Cisco is so appreciative, he hugs Stein. Not every show can pull off these little satisfactory character moments as easily as Flash and it’s a main reason why the show is so enjoyable.

Thanks to being cast as clueless unrequited love interest last season Iris was pretty much everyone’s least favorite regular cast member, but I like the strides made to make Iris more than the future girlfriend.

Barry doesn’t appreciate the help, but after barely surviving his second encounter with Atom Smasher, he’s a bit more open to some feedback from Joe. The show’s restrained use of flashbacks again proves useful as we’re shown Joe telling Barry it’s OK to be sad and that it’s tougher to give in to those emotions than being angry and shutting everyone else out. 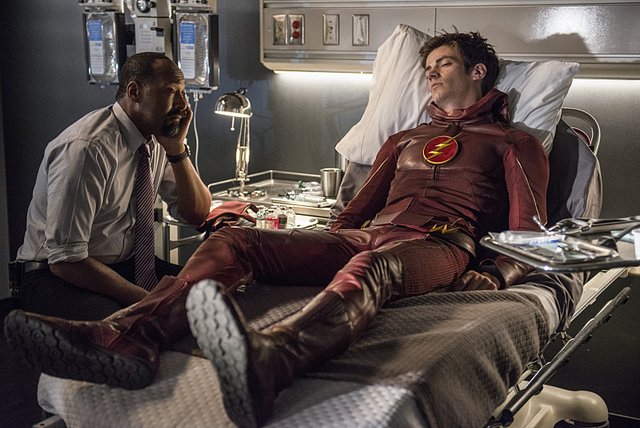 In present day, Joe gives Barry the tough love speech that yeah, trying to save his mother screwed up a lot of things, but it wasn’t all his fault and it’s time to stop beating himself and move on. These moments really should be corny, but Jesse L. Martin continues to deliver them so sincerely it works.

Taking Joe’s advice, Barry visits Caitlin to learn she’s been blaming herself for Ronnie’s death for not leaving Central City when he initially returned from the dead. Barry tells her about Wells’ message, which they are shocked to see contains Wells’ confession of murdering Nora Allen providing the full evidence necessary to get Barry’s father released from prison. 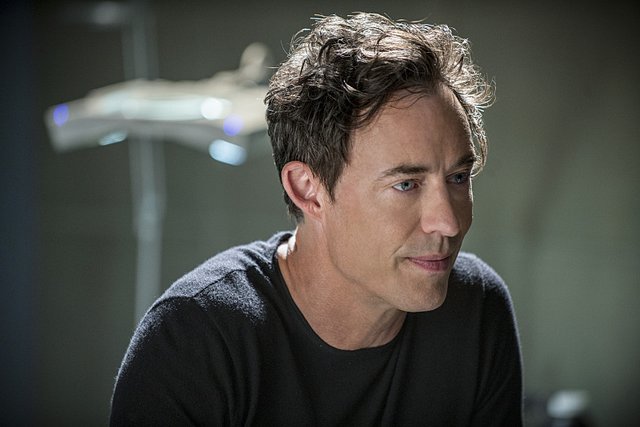 I’m definitely going to need some follow-up on this as Wells’ apology/confession seemed way out of character. Hopefully there’s more to that as it’s definitely not the behavior one expects from an arch-enemy.

With that game-changing news, Barry is ready to reunite the team and figure out how to beat Atom Smasher. Since Atom Smasher absorbs radiation, the team just decides to max out his absorption limits. Flash lures him to a radioactive chamber and overdoses him on radiation.

Beyond my regular don’t kill off a decent villain stance, this hardly seemed like the heroic solution in handling a problem. Isn’t containing meta-villains the whole point of the STAR Labs basement chamber? Before he dies, Atom Smasher says he was promised a return home if he killed Flash and that mysterious benefactor’s name is Zoom. Hoo-boy, that’s going to be interesting.

Finally, it’s time for the long-awaited moment of Henry’s homecoming. All of Team Flash is here for the joyous occasion.  It was an especially well-earned emotional moment seeing Joe and Henry embrace. Barry’s complete happiness is short-lived as Henry says Barry won’t be the hero Central City needs with him in town.

I didn’t quite buy that as it’s not like Barry would ignore crime to watch the game with Henry to make up for lost time. But, it’s not like John Wesley Shipp needs to be a series’ regular and getting him out of town avoids the forced prison pep talks.

In a really nice moment to reinforce the show is definitely not all doom and gloom, Joe geeks out with Barry about The Flash getting the key to the city. 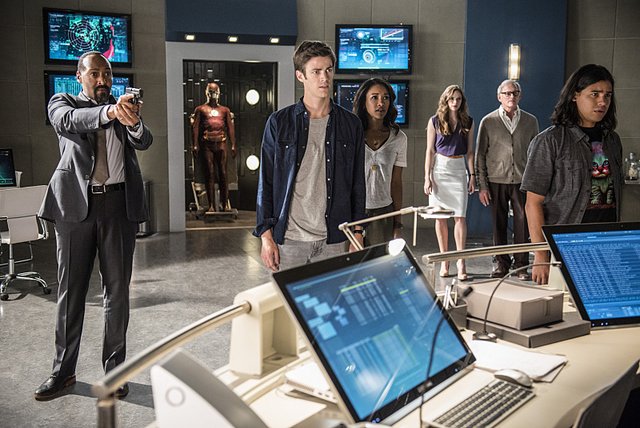 Team Flash is reunited and ready to face the future. Cisco’s even made an adjustment to the suit changing the red circle to the more familiar white. No sense fearing the future they say. And in an equally overdue move, Cisco announces they’ve beefed up STAR Labs security so random people can’t just waltz in. That triumphant declaration was hilariously ruined as that shadowy figure who’d been observing Barry all episode walks in with a warning to Barry before revealing himself as Jay Garrick. The fun’s just getting started this season, folks.

Beyond the deja vu with the Caitlin/Ronnie subplot and the intentional villain murder, this was a strong return for “The Flash” and I’m stoked to see what’s in store for Team Flash with the arrival of Garrick.

0 thoughts on “The Flash review Season 2, Ep. 1- The Man Who Saved Central City”