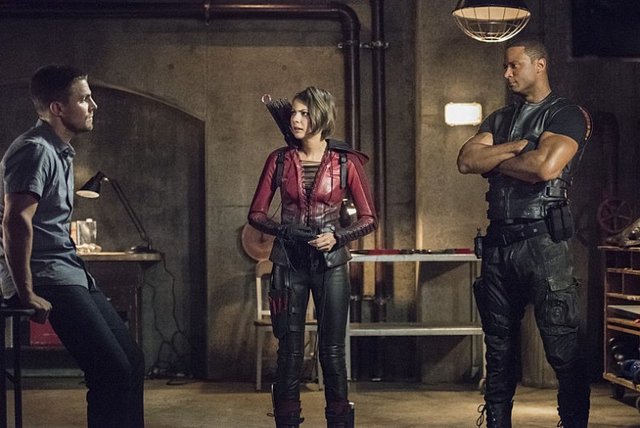 You know the season premiere of Arrow is on point when the biggest reveal isn’t the Hal Jordan reference, but the double twist of a shocking alliance and the revelation that someone on Team Arrow won’t make it through the season.

We open with a jarring sight of fully domesticated suburbanite Oliver Queen finishing his morning run through his Ivy Town neighborhood.

In the comics, Ivy Town is the base of operations for The Atom and as usual, I love all the little nods the show throws to the larger DC Universe. It’s been months since Ra’s was defeated and Oliver has made good on his pursuit of happiness. He’s been traveling the globe with Felicity, removed his tattoo homage to Shado, perfecting his culinary skills and actually found his smile.  Side note: content and smiley Oliver is very odd.

To fully embrace his newfound joy, Oliver is ready to seal the deal and happily shows some of their brunch buddies Moira’s ring, which he’ll be using to propose.

Meanwhile, back at the newly-re-branded Star City, the remnants of Team Arrow — Diggle, Black Canary (Laurel) and Red Arrow (Thea) — are trying to stop some truck-jackers from making off with material from Kord Industries. My season will be made if the writers make Ted Kord aka the best Blue Beetle a recurring character this year.

Thea provides us something we hadn’t seen in either “Arrow” or “Flash” thus far — the smiling, excited sidekick type character happy to take down some villains instead of brooding 24/7.

Team Arrow 3.0 is still a work in progress as the crooks known as The Ghosts getaway thanks to a backup truck armed with a machine gun. Feeling outmaneuvered, Laurel and Thea are ready to ask Oliver for help, despite Diggle’s misgivings about not being able to trust the man who jeopardized his wife, Lyla, and daughter.

After devoting so much of last season establishing Team Arrow could fight the good fight in Oliver’s absence, it felt like a major setback to have them crawling back to him at the first sign of some significant trouble. Especially since The Ghosts lacked any powers and were just the same standard issue gun-toting villains Diggle has been battling alongside Laurel for a year. And after training with Merlyn to take down the League of Assassins, this hardly seemed a serious threat to Thea either.

I can’t stress enough how welcome a sight it was for Season 4 main villain Damien Darhk saying to heck with being a shadowy threat that’s hidden for most of the year and straight up threatening all of Star City’s leaders right away.  When it comes to actors who just exude pompous villainy, there’s few better than Neal McDonough (Agent Carter) and his debut bodes well for a fun adversary very different from the more strategic Ra’s al Ghul.

Darhk’s men kill most of the city leaders save Quentin Lance, who barely avoids being killed thanks to Black Canary’s last-minute rescue.  The assassinations are enough to convince Oliver to get off the bench and help.

Turns out he was the only holdout of the team as Felicity had been secretly running off to help them with their missions and even got Cisco to make Oliver a new suit. I loved that twist as for a change, it’s the love interest who’s been itching to get back into action while the hero is the one that’s reluctant.

And quickly we see why Oliver’s been so apprehensive as both Diggle and Quentin lay into him for being untrustworthy and a danger to everyone around him. It’s rough being the returning hero in Star City.

I was also glad to see Thea being a little overly aggressive in the battle with Dahrk’s men suggesting her dip in the Lazarus Pit will continue to have consequences this season.

Dahrk easily took care of Oliver in their first encounter and was only spared from getting his life essence drained via Dahrk’s freaky mystical powers by Diggle’s timely rescue. I always enjoy seeing Oliver initially struggle with the villain so he can go all “Rocky III” for the rematch.

The flashbacks actually had some substance this week as we look back five years ago with Oliver back in civilization. Not home at Starling City, but at Coast City making his dry run as The Hood and refining his archery vigilante game. Amanda Waller finds him and takes him to a bar to discuss his future. Major geek out moment as we see a flight jacket with “Jordan” on the front. Yes, it could be Hal’s father, but give me this moment, alright?

Waller realizes Oliver considers himself a monster and wants to use him as her weapon. Before Oliver can reject the proposal, Waller drugs him and puts him on a plane. There, ARGUS agents force him to parachute back onto the island. Interesting.

To firmly re-establish himself to Star City, Oliver taps into the network frequency and in keeping with the re-branding theme announces he is The Green Arrow.

Dahrk could care less about the reveal as he’s channeling his powers until his guest arrives… and it’s Quentin?!?! Just how far down the Dahrk Side (sorry) has Quentin gone?

Oliver unwinds with Felicity at his old loft. He’s got the engagement ring back out, but doesn’t propose — deciding to just simply enjoy this quiet moment with the love of his life.

In an usual time direction for the show, we fast forward six months later to Oliver standing at a fresh grave. Barry Allen races in apologizing for missing the funeral as he was dealing with Zoom. Oliver is still taking it in, but says his mission is to eliminate the darkness in this city, which apparently has taken the life of a very dear loved one. Felicity? Thea? Let the speculation begin!

Felicity sure seems like the most obvious bet. If the show aligns with the regular comic continuity, eventually Oliver and Laurel have to end up together and Oliver would need sufficient time to grieve so best to rip the Felicity band-aid this year. Plus, it would make those Olicity scenes much more meaningful if viewers are worried Felicity could eventually get killed off.

Despite the awkward re-introduction of Arrow back to crimefighting in Star City, the rest of the episode was strong, quickly establishing the season’s main threat and his secret partner and the major tease that this season will have some major consequences for Team Arrow.